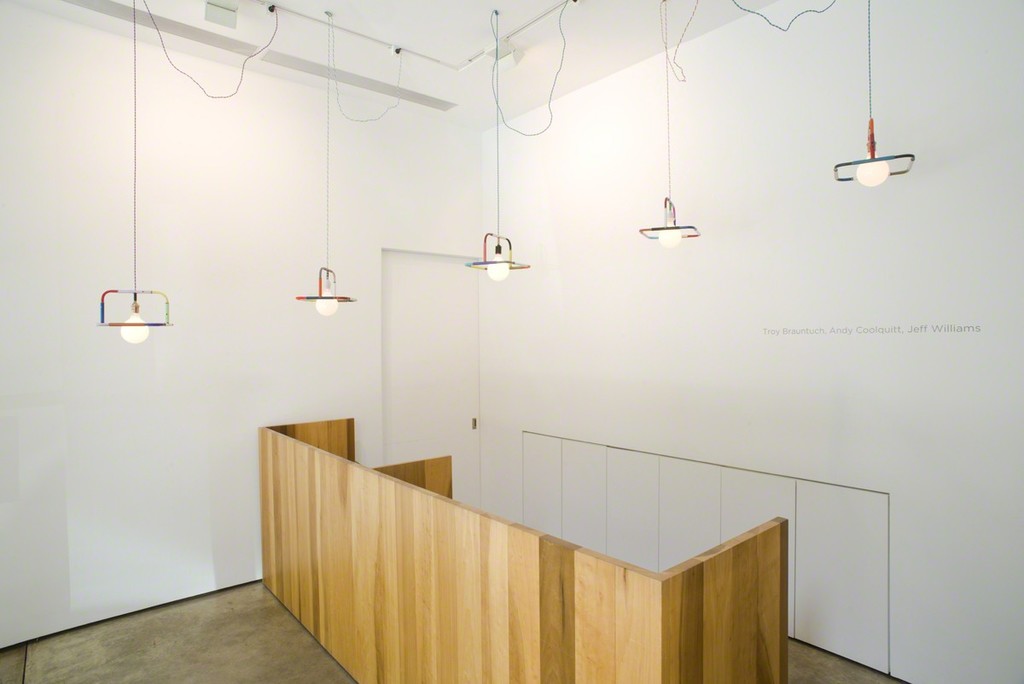 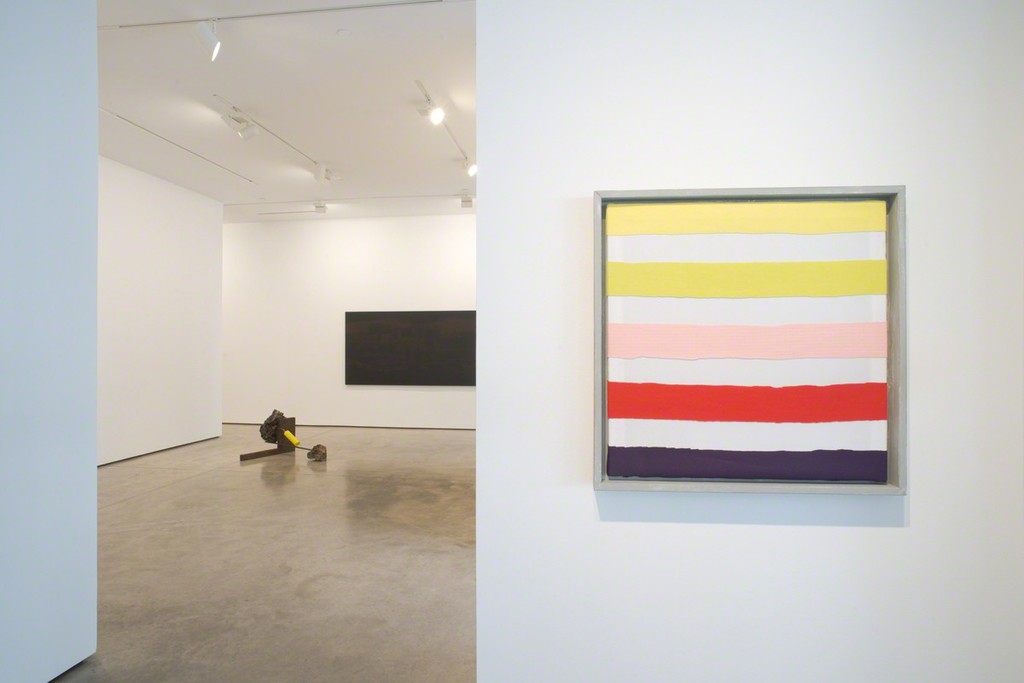 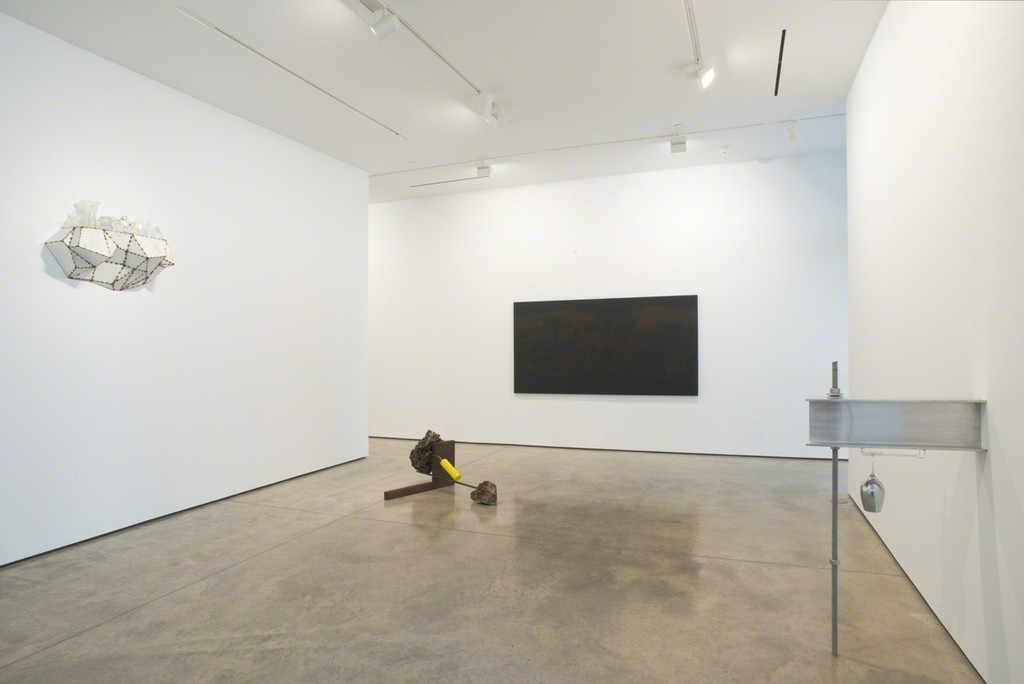 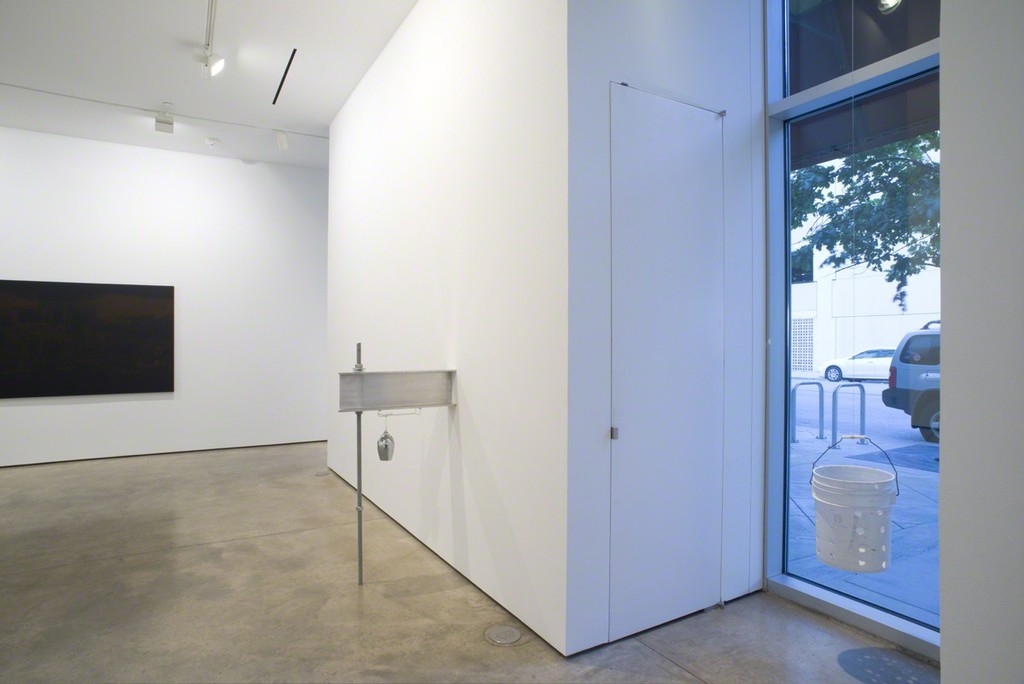 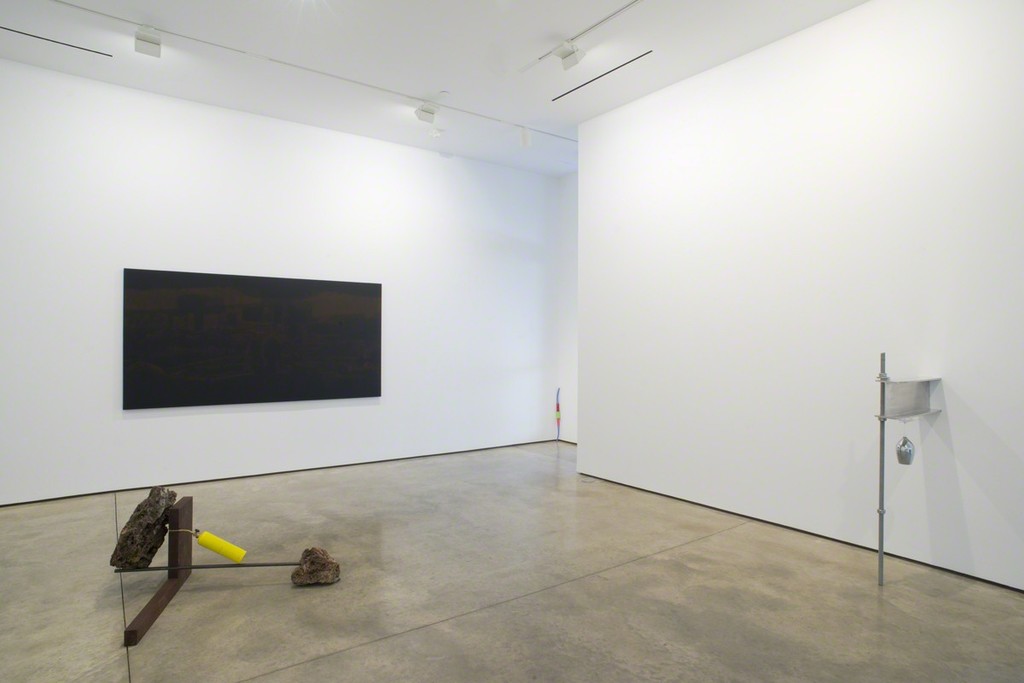 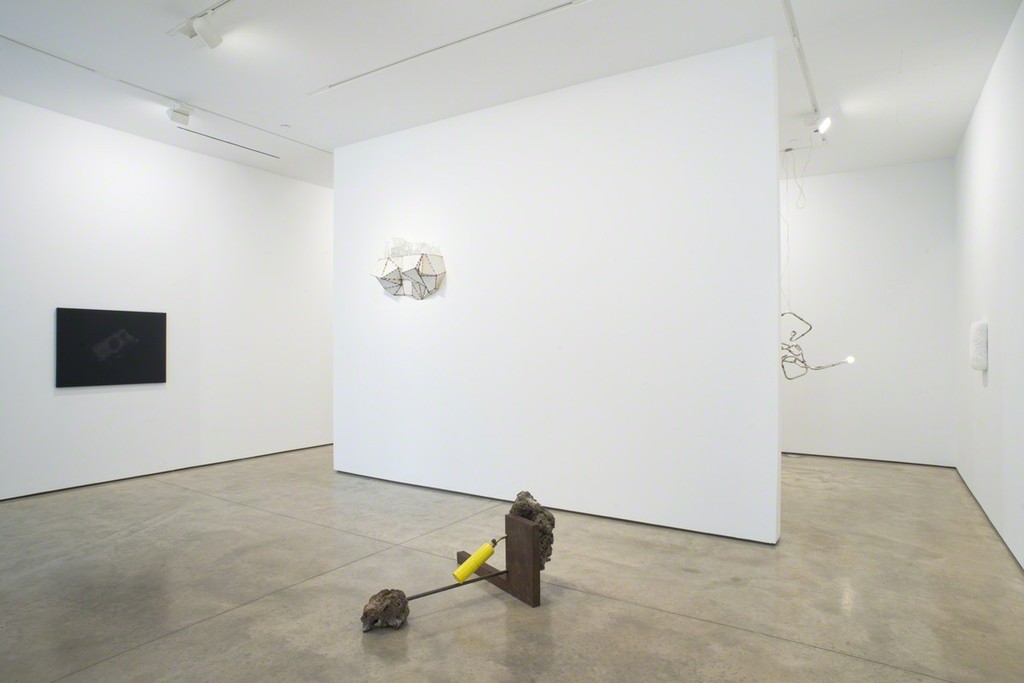 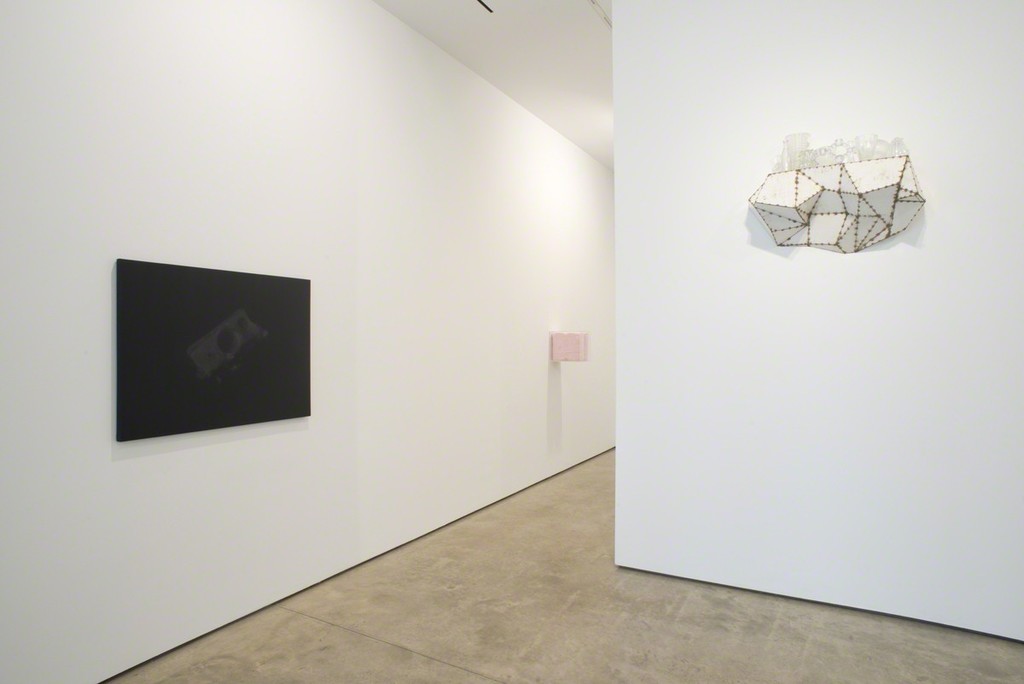 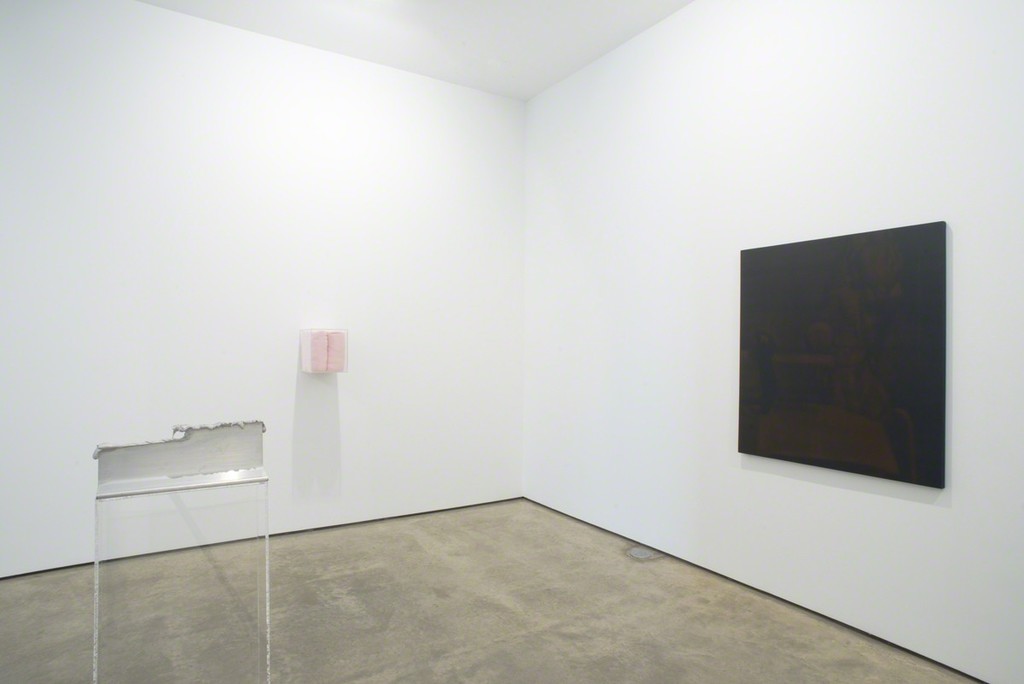 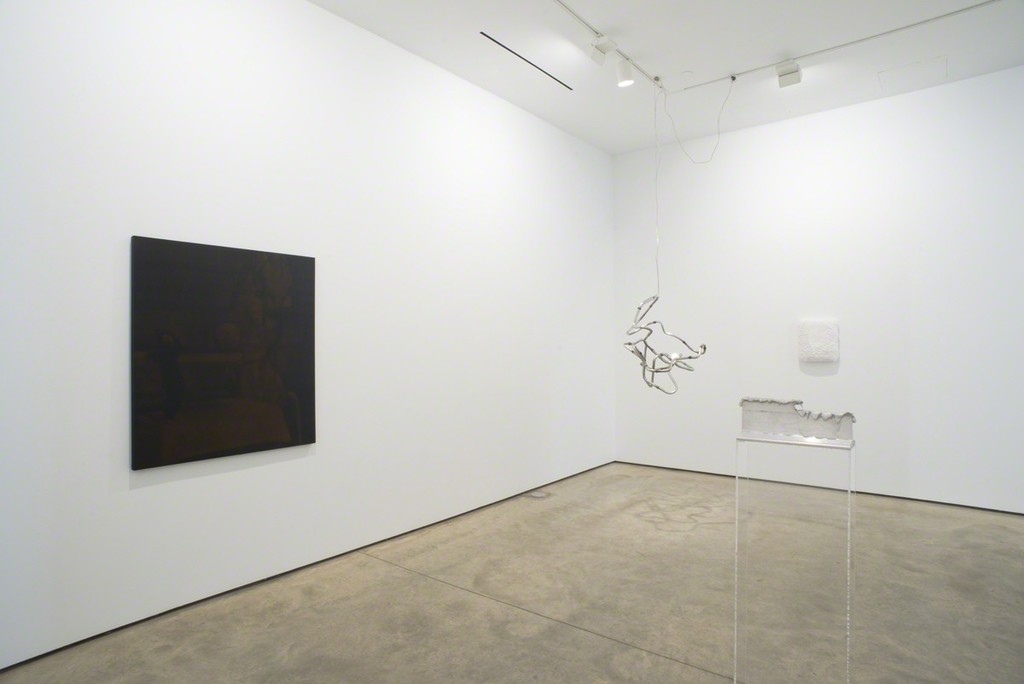 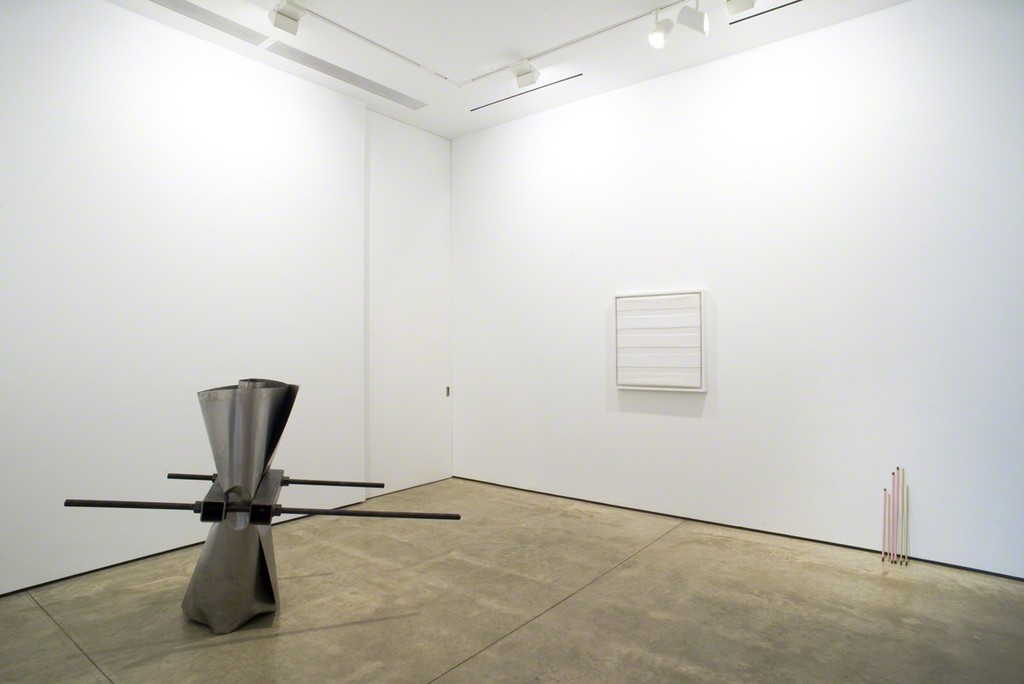 Lora Reynolds is pleased to announce a group exhibition of sculpture and works on canvas by three Texas-based artists: Troy Brauntuch, Andy Coolquitt, and Jeff Williams.

Hazy subjects peek through the deep blackness of Troy Brauntuch’s works on canvas. At first indeterminate—and even after a prolonged look, sometimes still unrecognizable—Brauntuch’s imagery is often derived from newspaper photographs or film stills that imply trauma or tragedy. He also draws from pictures of private moments and places—his parents’ swimming pool, his girlfriend’s dress, his sleeping cat Micky. But even after Brauntuch’s images reveal themselves to the eye, they can be beguilingly difficult to link together. They are investigations into how we construct meaning—or fail to—from current events, history books, films, advertisements, and everyday life.

The objects in Andy Coolquitt's work come from everyday life. He explores the relationships between groups of objects as they travel from the street to the studio and the exhibition space. Colorful metal tubing—from abandoned shopping carts and children’s toys— is assembled into simple geometric forms (and often incorporates light bulbs). Disposable plastic lighters—found in gutters and crack dens—might be displayed on a rod that leans against a wall. 40-ounce malt liquor bottles sit on the ground; extra-long constructions of plastic straws climb out of them and up to mouth-level. Sometimes a pair of pants lies crumpled on the floor as if somebody just stepped out of them. It can be difficult to tell whether Coolquitt’s objects are “somebody-mades” (curiously modified things he finds as-is on the street), “finished works” (in which the hand of the artist is evident), or “in-betweens” (objects that may have the potential to be incorporated into a finished work). This ambiguity of origin collapses the distinction between art and life, highlighting Coolquitt’s ultimate goal of honoring existing communities while building new ones.

Jeff Williams pushes the materials in his sculptures to their limits by compressing, torching, or corroding them: he forces steel, aluminum, or concrete to teeter on the edge of structural failure, provides the potential for a limestone fossil to erode at an accelerated rate, or otherwise manipulates the relationships air, light, water, and gravity typically have to time. Williams’s objects, with their implied or actual transformations, challenge our assumptions about strength and longevity—of the Earth, architecture, even our bodies—and emphasize the inevitability of change.

Andy Coolquitt was born in Texas in 1964. He has shown his work at the Blaffer Art Museum (Houston), AMOA-Arthouse (Austin), 21er Haus (Vienna), Locust Projects (Miami), and OUTPOST (United Kingdom). His work is represented in the collections of the Philbrook Museum of Art (Tulsa), Belvedere Museum (Vienna), and D. Daskalopoulos Collection (Greece). Coolquitt lives and works in Austin and New York City.

Jeff Williams was born in Massachusetts in 1976. He has shown his work at the Contemporary Austin, Artpace (San Antonio), Recess New York, Socrates Sculpture Park (Queens), Smack Mellon (Brooklyn), Blaffer Art Museum (Houston), and Museum of Fine Arts, Houston. He won the 2012 Texas Prize and received the Leonore Annenberg Fellowship at the American Academy in Rome. Williams lives and works in Austin and Brooklyn.