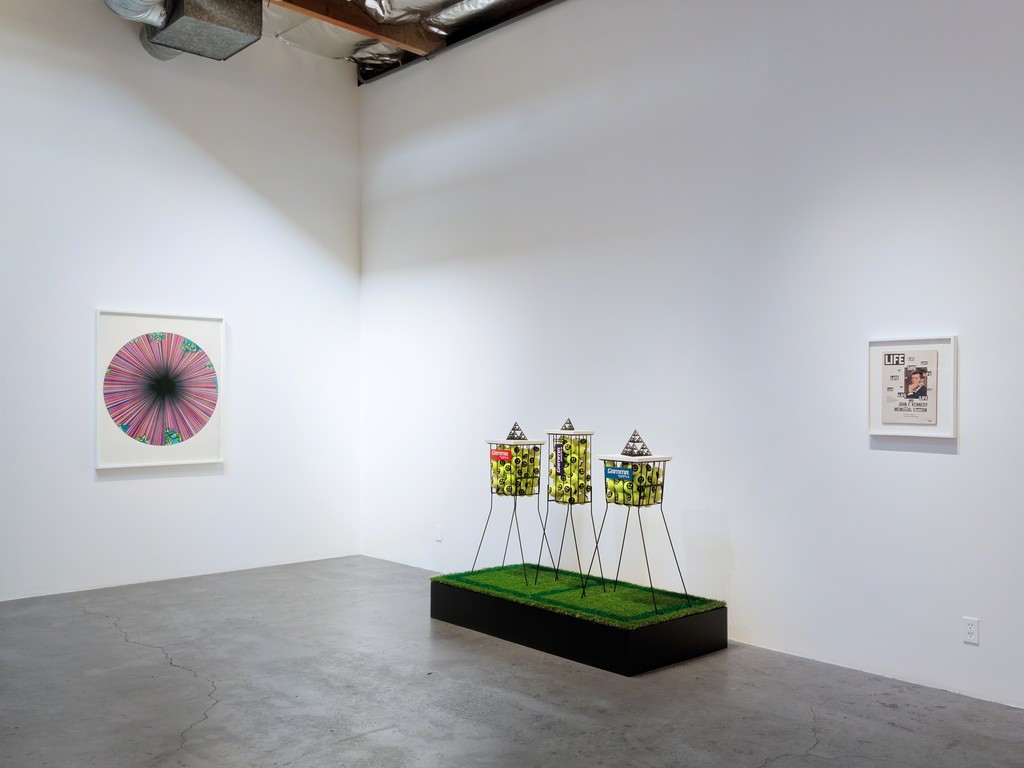 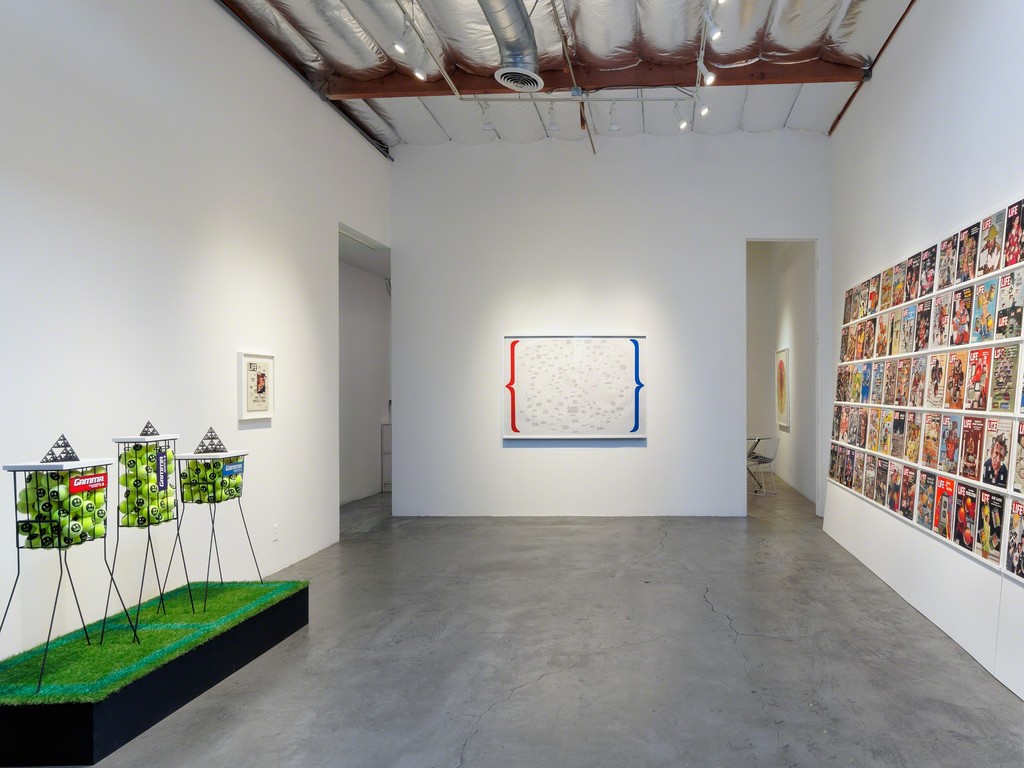 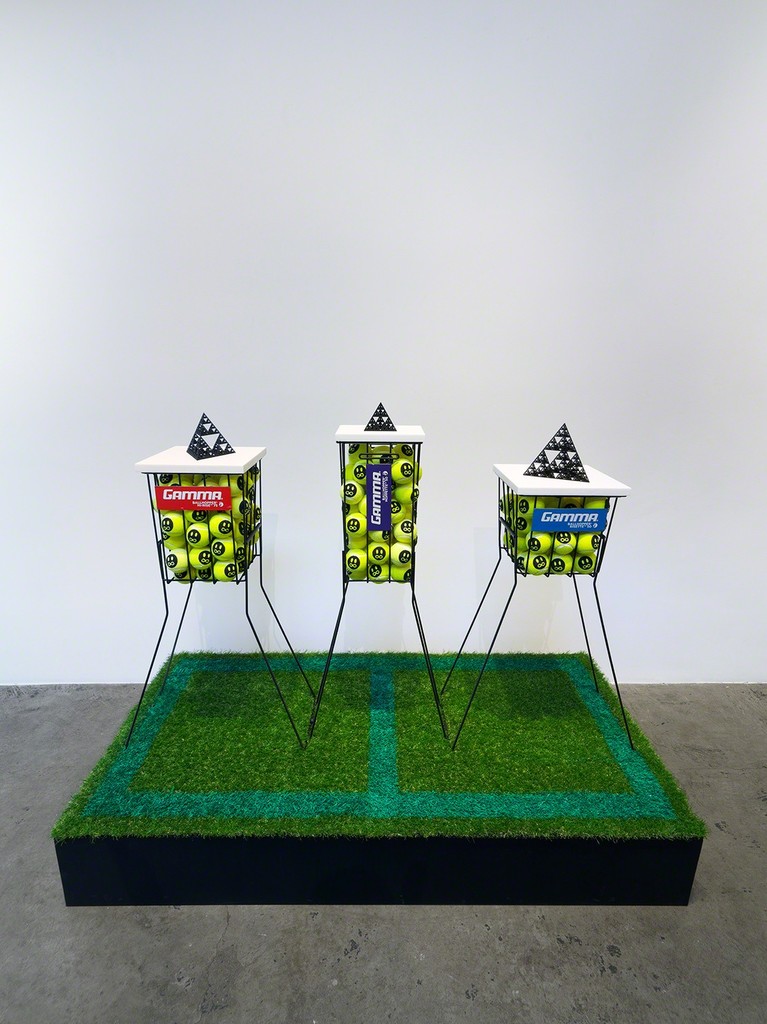 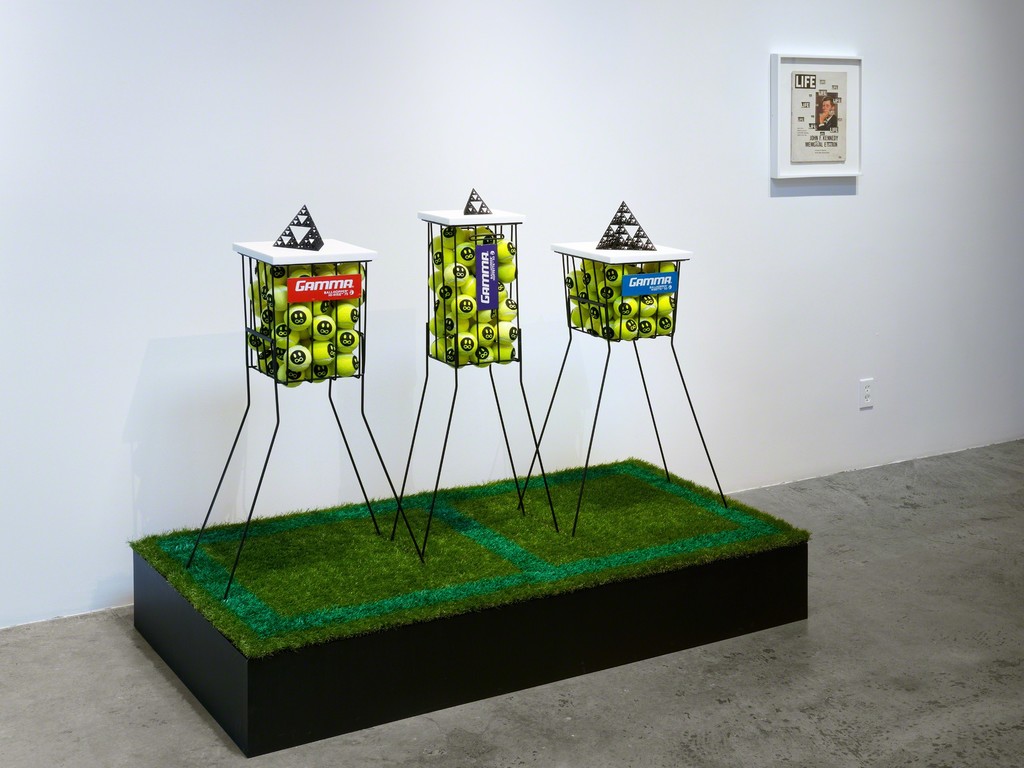 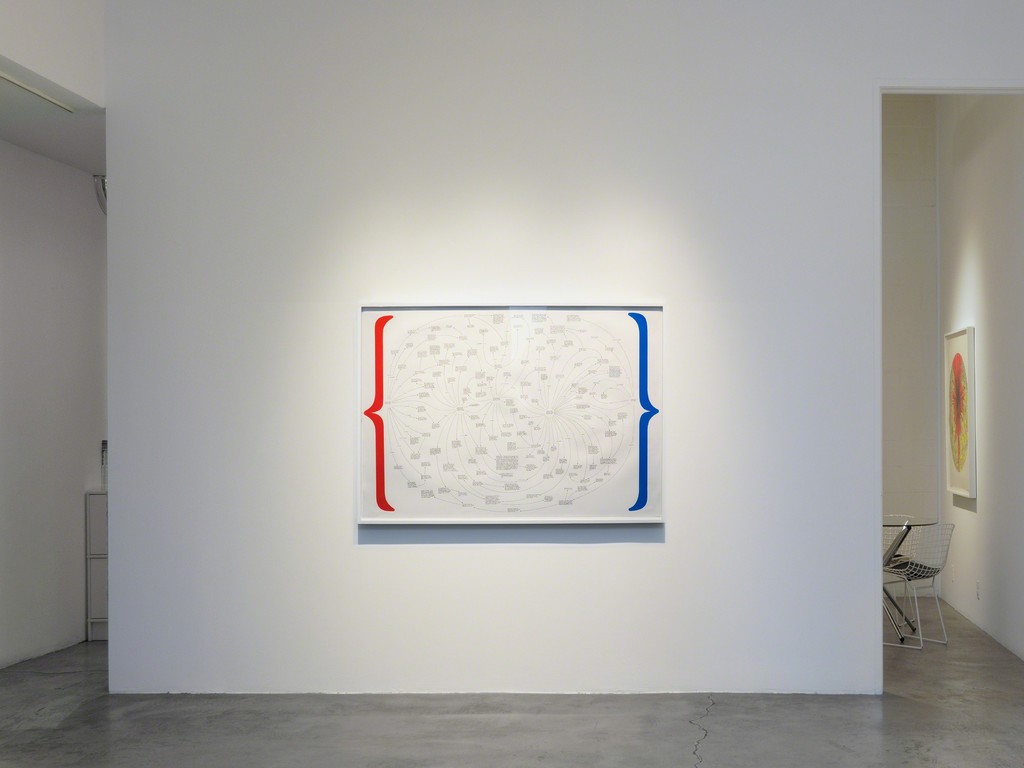 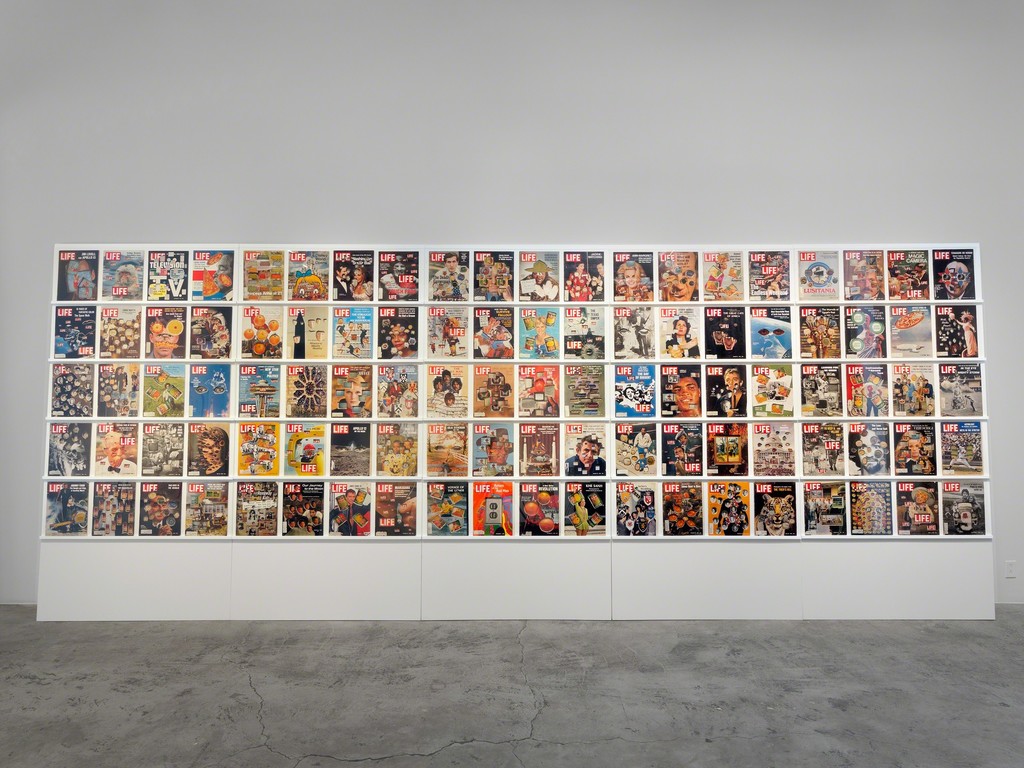 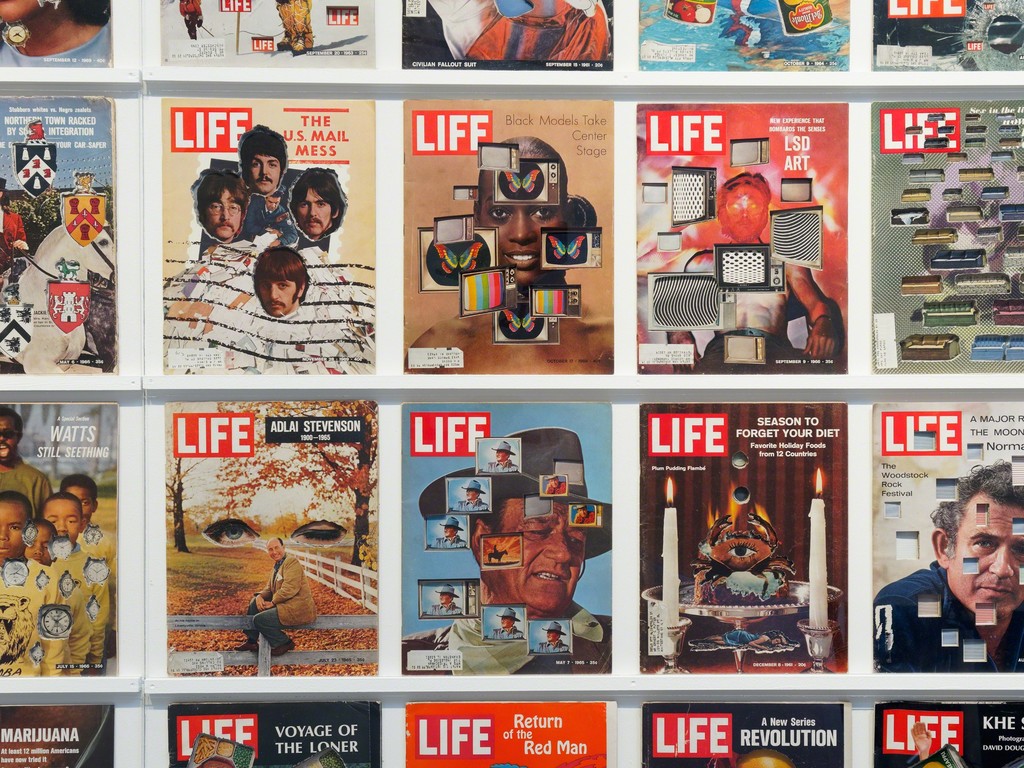 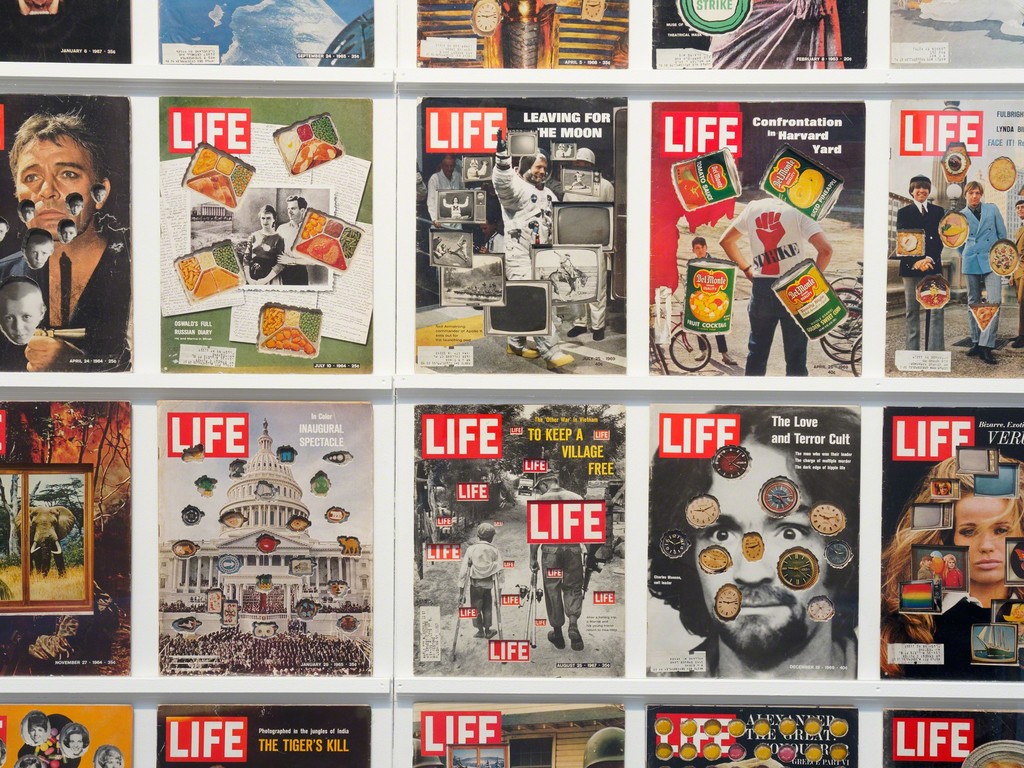 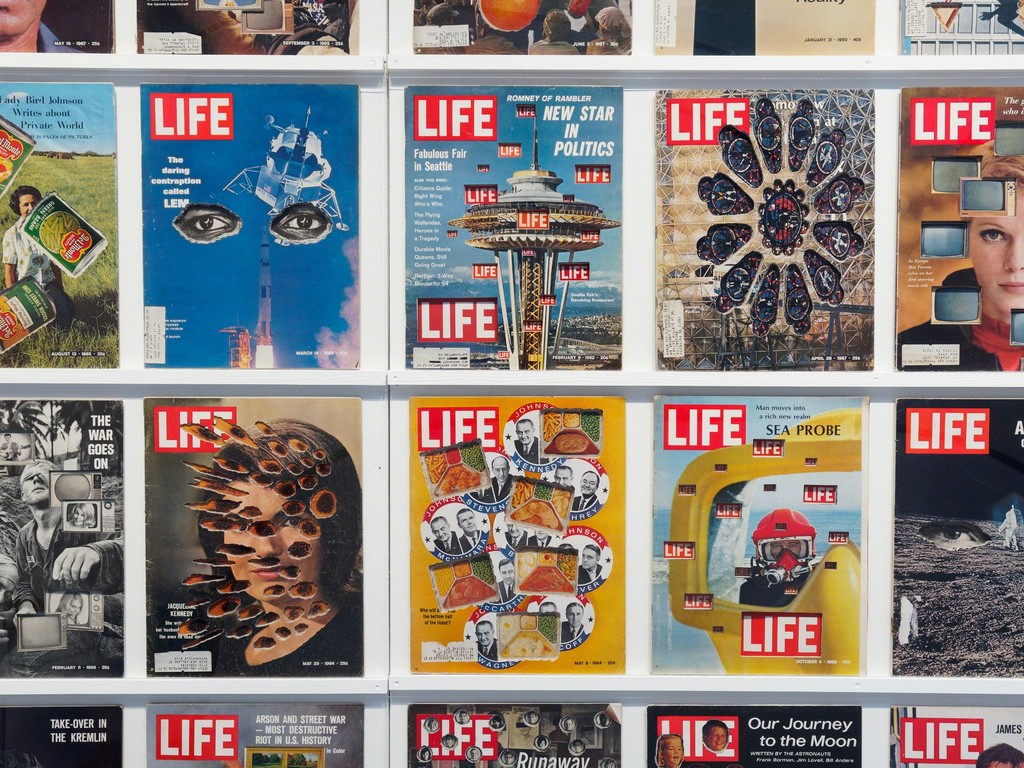 Luis De Jesus Los Angeles is very pleased to announce DENNIS KOCH: Beyond the Funny Farm! Crypto-K, Cutouts, Cut-ups, Copies, Mirrors, Membranes, and Temporal Algorithms, the artist's third solo exhibition with the gallery, to be presented from June 23 through July 28, 2018. An opening reception will be held on Saturday, June 23rd from 4:00 to 7:00 p.m.

Known primarily for his cerebral and meticulous large-scale colored pencil drawings, Dennis Koch expands his universe to explore the visual strategies of the search for coincidence and meaning. In Beyond the Funny Farm! Koch creates a mind-map of relationships that find, build, and amplify meaning in the form of sculptures and drawings. Wooden newsstand-like sculptures display 100 vintage copies of LIFE magazine, each carved page by page to reveal interior images. Known as the first all-photographic American news magazine, LIFE revitalized itself during the 1960s in response to the popularity of television media. Koch's interest in LIFE as a cultural artifact stems from a time-parallel between contemporary political upheaval and the equally tumultuous events of the 1960s. Koch transforms the magazines into Cutouts - hand-cut magazine sculptures that offer visual patterns, ironic juxtapositions, humor, or criticism uncovered through Koch's meticulous X-Acto knife excavations of LIFE. The Cutouts interrupt and reconstruct common narrative strategies by altering an object designed to be read in a linear page-turning fashion, creating correlations between cover stories and interior culture-influencing advertising or photojournalism, and by compressing past, present, and future into one legible space.

These works are accompanied by a drawing from Koch's ongoing Versor Parallel series, a collaborative drawing, and a sculpture. Consisting of three tennis ball hoppers converted into quartz-topped pedestals that display 3D-printed Sierpinski Triangles, the sculpture is placed centrally within the exhibition. A Sierpinski Triangle contains a fractal within an equilateral triangle that creates an infinite regression in a finite space, which works harmoniously with Koch's Versors made of colorful vortices circumscribed to create an exponential matrix of triangles that creates the illusion of prismatic light. Both models utilize abstraction and geometric systems to describe and simulate naturally occurring phenomena, such as crystals or galaxies, but in the context of Koch's practice these models become keys through which to view other works in the show. Koch's extensive research into pattern recognition, subliminal messaging, science fiction, and conspiracy theories become tangible in each shift from Cutout to drawing to sculpture, culminating in his most recent work, a drawing made in collaboration with Alex Fulton, a blogger, podcaster, and researcher. Conspiracy theories are typically guided by the principles that nothing happens by accident, nothing is as it seems, and everything is connected. In Beyond the Funny Farm! Crypto-K, Cutouts, Cut-ups, Copies, Mirrors, Membranes, and Temporal Algorithms, Koch recreates and rearranges these orchestrations of meaning to critique tautological and dogmatic systems of belief.

Dennis Koch (b. 1978, Cedar Falls, IA) received a BFA in Studio Art and a BA in Political Science from the University of Iowa, Iowa City, IA. Koch’s work has been exhibited in Los Angeles at the Underground Museum, the Torrance Art Museum, Blum and Poe, Marine Projects, Happy Lion, Kantor Gallery, High Energy Constructs, and Royale Projects, as well as internationally at Galerie Zurcher, New York; Galerie Sabine Knust, Munich; and Miyake Fine Art, Tokyo. In 2013, Koch was featured as one of 7 emerging male artists to watch in in Los Angeles Confidential Magazine. He splits his time between Iowa and Los Angeles.