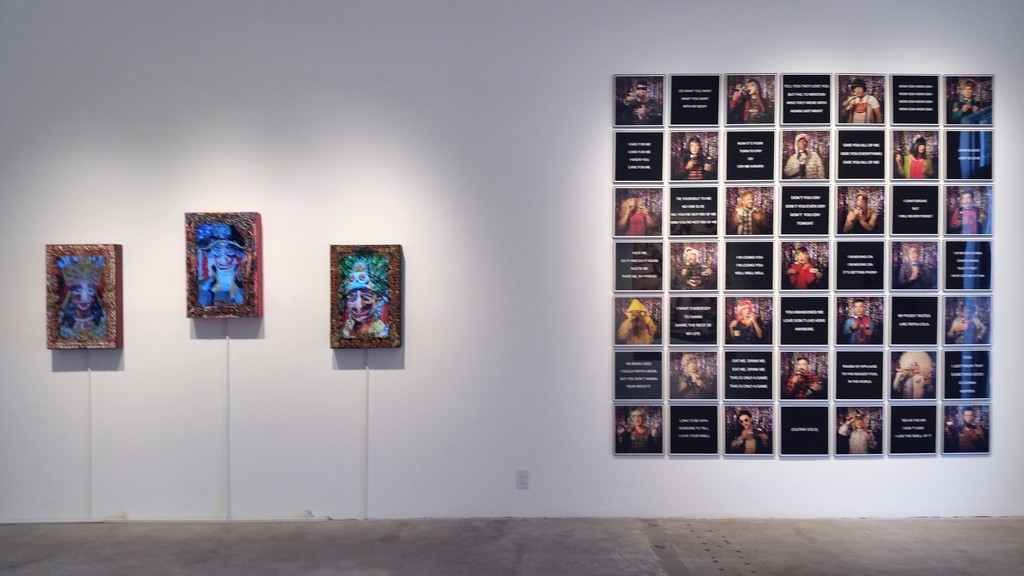 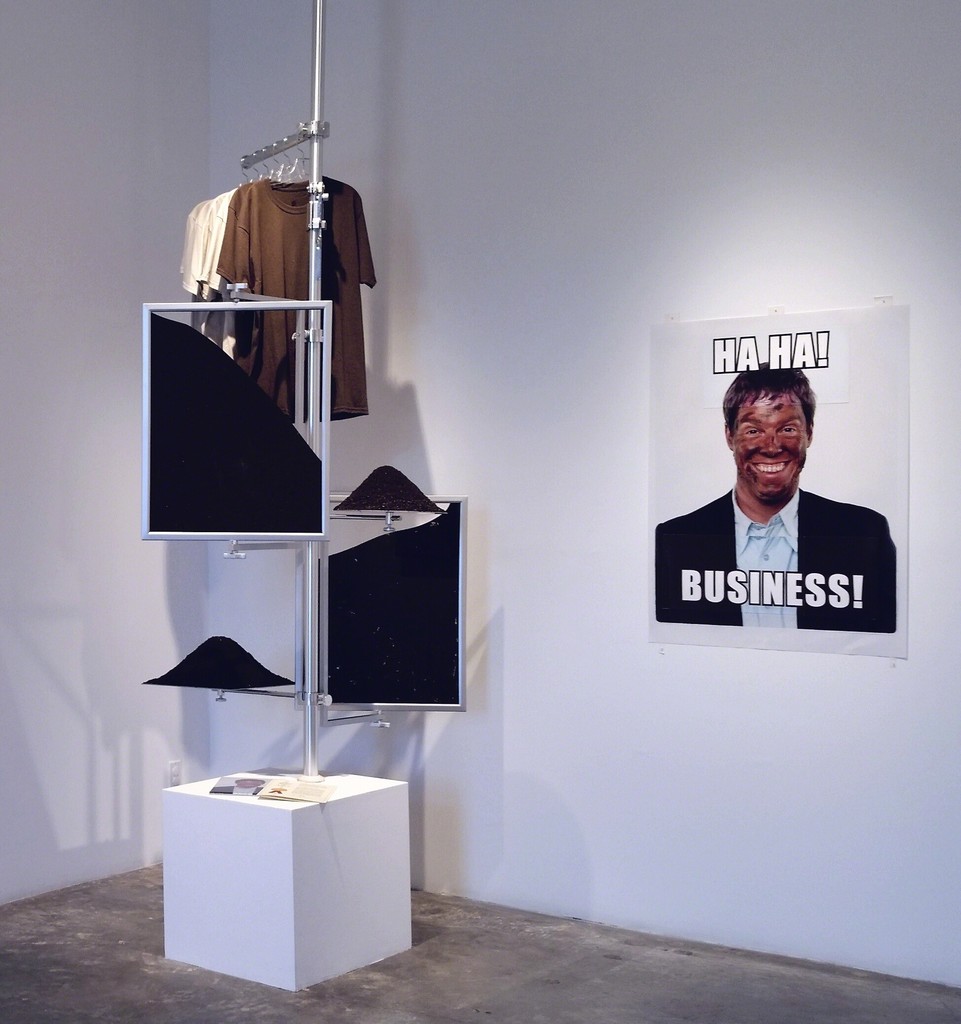 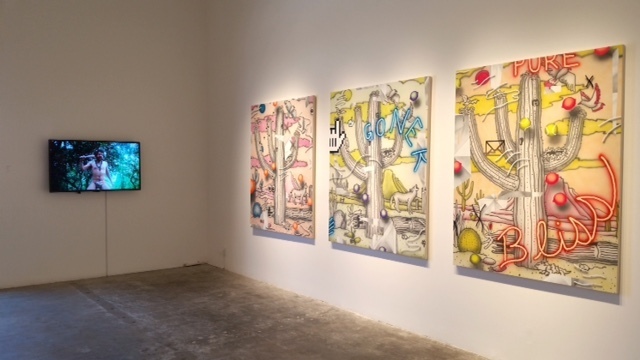 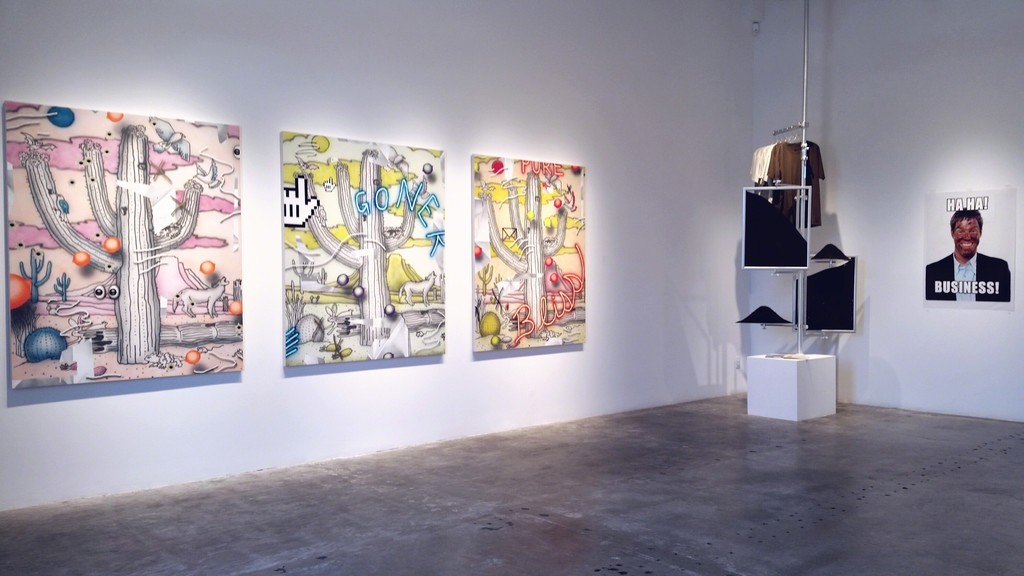 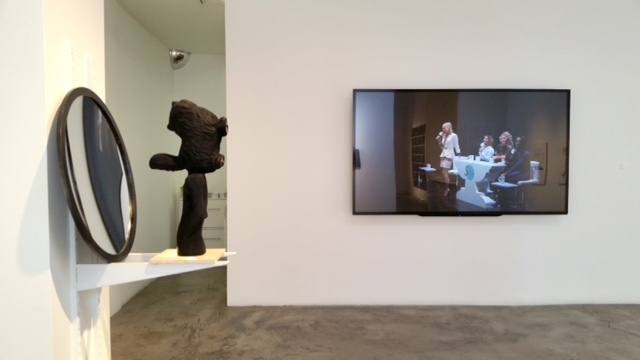 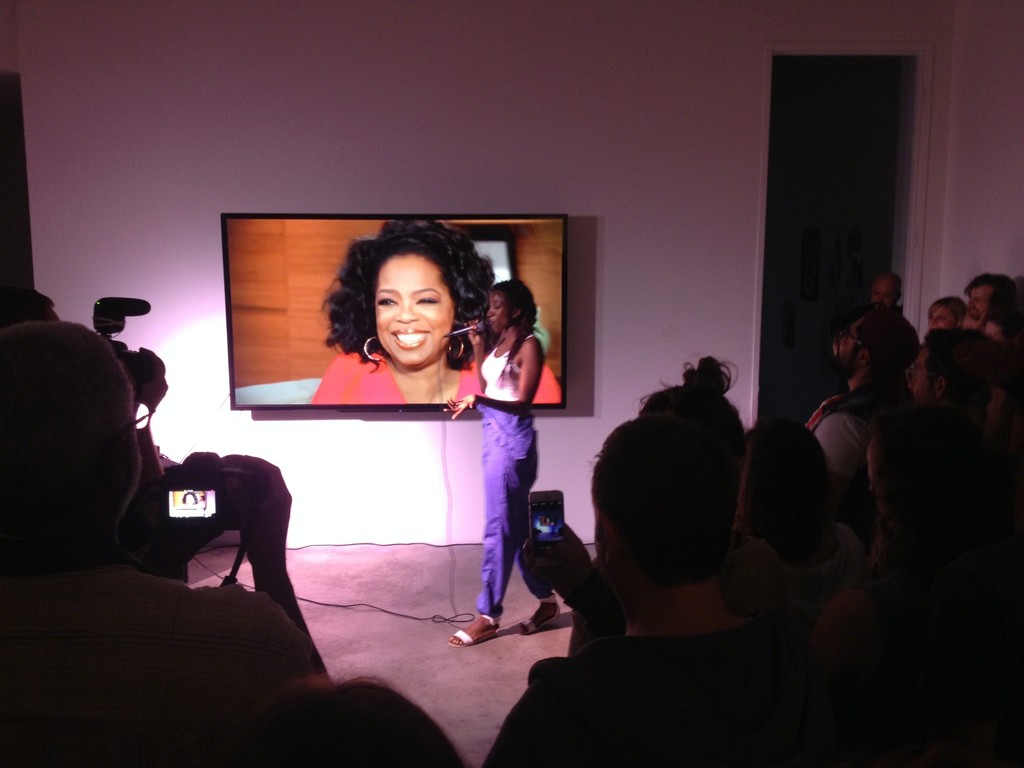 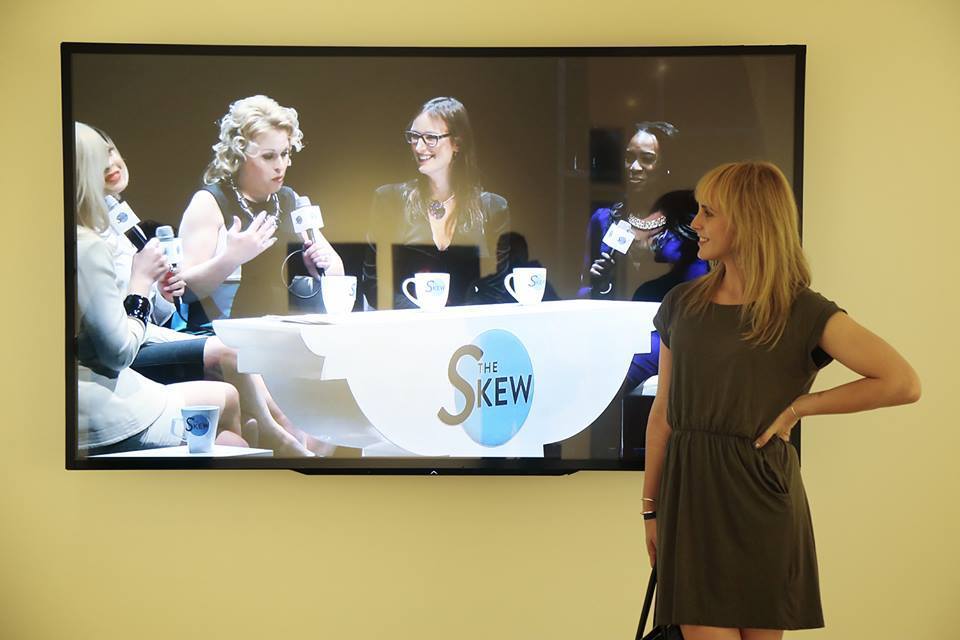 Zackary Drucker's "The Skew", video of performance at the MCA Chicago. 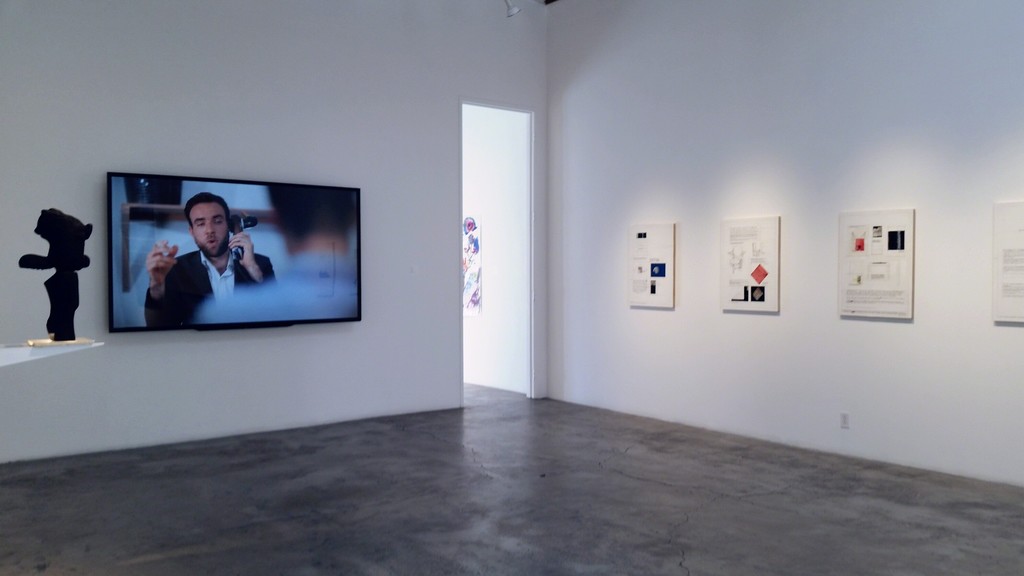 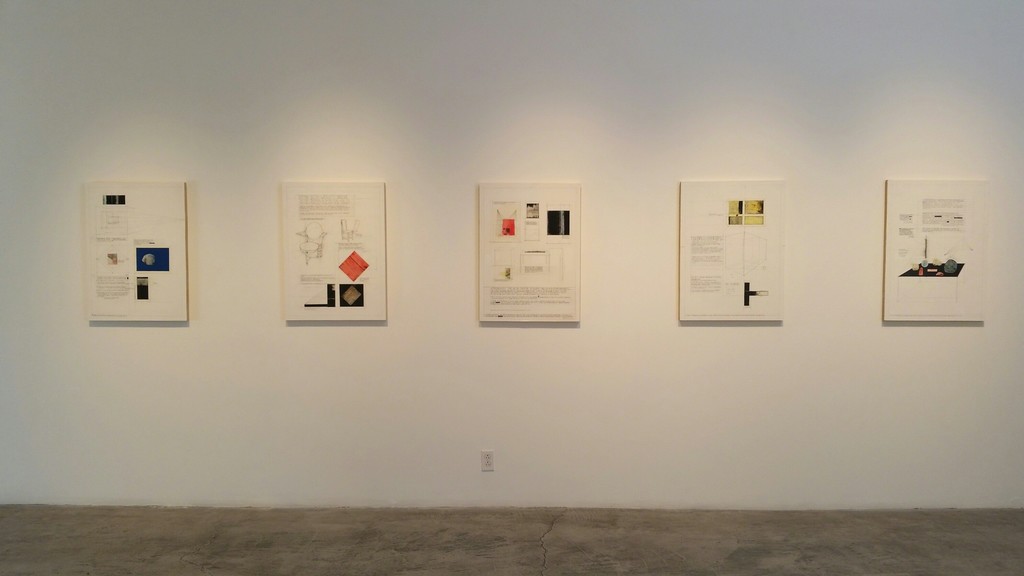 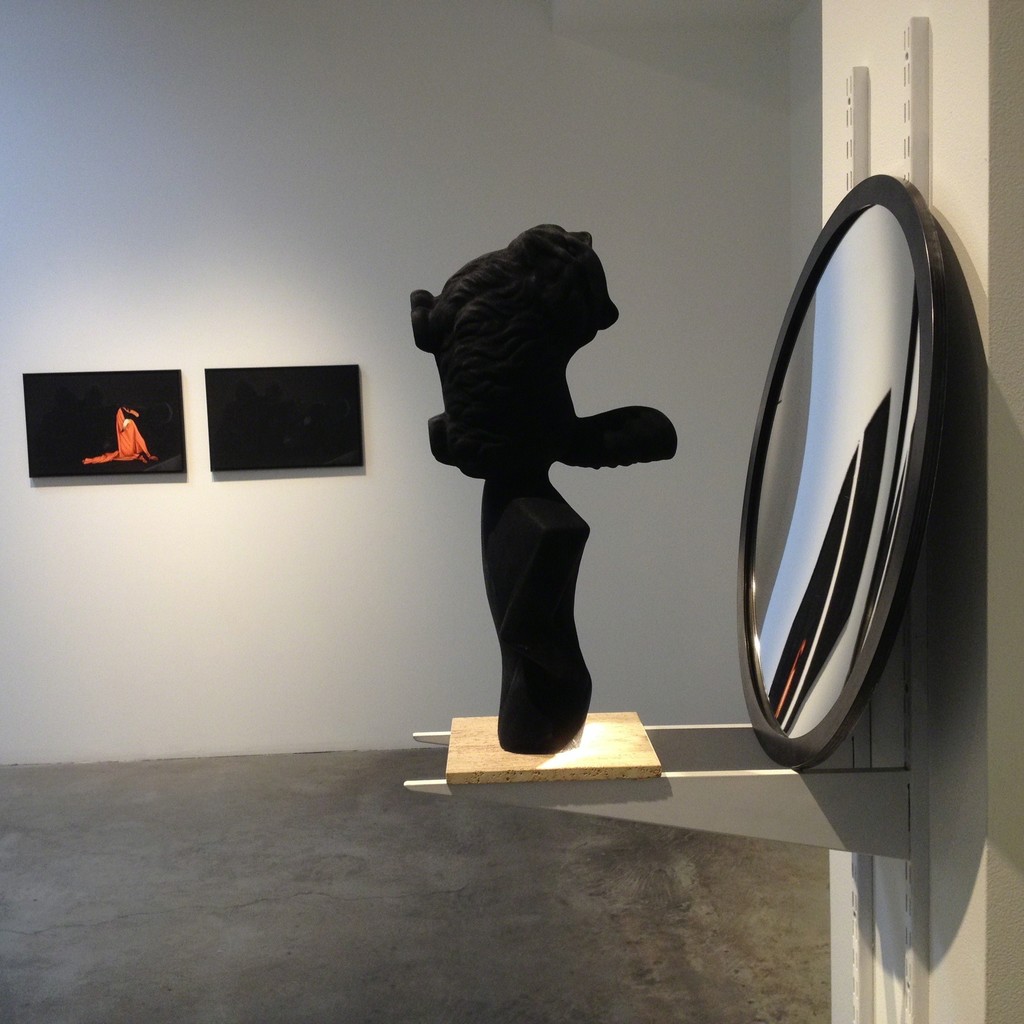 The art world is now a global business, of course, as is just about everything else. Facebook, Instagram, Twitter and Skype have become our new living room, our church, our megaphone - and, some would argue, our toilet, too. And, it seems everyone wants to sit on the throne and be heard. Life is now "all news, all the time" and humor is the unifying force that allows us to look in the mirror, if for no other reason than to get a quick reality check and, hopefully, a little truth. HA HA! BUSINESS! continues my quixotic interest in making sense of it all.

Twenty-five years ago I organized an exhibition titled $PENT: Currency, Security, and Art on Deposit for The New Museum in New York. I was one of a number of young applicants invited to apply for new "multicultural" NEA-funded curatorial internships, a nationwide initiative to bring more women and minorities into the field. $PENT was the culmination (or "thesis exhibition") of my yearlong internship in the museum's curatorial department and it was supported by a cast of very talented emerging artists, including Glenn Ligon, Moyra Davey, Gary Simmons, Paul Ramirez Jonas, Carrie Mae Weems, Donald Moffett, and Julia Scher, among others - for many of them, their first museum project.

My residency at The New Museum was bracketed by a series of newsworthy events, among them the continuing devastation of the AIDS pandemic and the tumultuous upending of the ecomomy wrought by the Wall Street crash (both which dealt proportionate blows to the art world), the dismantling of the Berlin Wall and the occupation of Tiananmen Square by pro-democracy demonstrators, the Iraqi invasion of Kuwait and subsequent Persian Gulf War, the election of George W. H. Bush as the 41st President of the US - and the first airing of The Simpsons on television.

Installed at a bank next door to The New Museum (concurrent with The Decade Show), $PENT was a serious exhibition designed to inject a big dose of subversive humor and provocative criticality upon a well-meaning host. It still amazes me that I managed to circumvent a cadre of, frankly, very suspicious bank officials who were left to scratch their heads and fend with the effusive congratulatory and community-building cheerleading of the museum's larger-than-life, never-say-never director, Marcia Tucker.

Fast forward: late last year, while doing research for our summer group show, I came across an image on the internet that stopped me in my tracks and caused me to break out in laughter. The HA HA! BUSINESS! meme gave me a good slap on the face and brought back great memories of $PENT. There he was again--the boogeyman with the briefcase full of cash, laughing uncontrollably while the world around him burns (my reading, anyway). The more things change, the more... And herein may lie the biggest difference between the two shows (call it a generational/attitude shift). If $PENT encapsulated the uneasiness of the time, HA HA! BUSINESS! relishes the discomfort with a huge grin on its face.

The art world is now a global business, of course, as is just about everything else. Facebook, Instagram, Twitter and Skype have become our new living room, our church, our megaphone - and, some would argue, our toilet, too. And, it seems everyone wants to sit on the throne and be heard. Life is now "all news, all the time" and humor is the unifying force that allows us to look in the mirror, if for no other reason than to get a quick reality check and, hopefully, a little truth. HA HA! BUSINESS! continues my quixotic interest in making sense of it all.

Yes, this is definitely a funny business! Ha ha.

When you think about it, attention-deficit order makes a lot of sense. In this country there isn't a lot worth paying attention to. - George Carlin

Surgery, sweetie. Lipo, on the hands and stomach, bum lift, tit lift, lose a rib and see what happens with my lips! - Eddie, Absolutely Fabulous

LEX BROWN
"I ain't a gold digger cus my blood is gold
It's so refined, it's rococo"

That's it! You people have stood in my way long enough. I'm going to clown college. - Homer Simpson

KEREN CYTTER
"I was a cook for four years, a waitress for one month, a copywriter for one day, a producer on a magazine, a runner on the set of a soap opera, and a journalist...I think the combination of them all influenced my work."

ZACKARY DRUCKER
"I think people usually expect me to be outrageous and mouthy. I'm really more of a polite intellectual lady than a shit-starter."

Reminds me of something my third-grade teacher said to us. She said, "You show me a tropical fruit and I'll show you a cocksucker from Guatemala. - George Carlin

JUAN PABLO ECHEVERRI
"I experienced everything that comes with being in such a remote, isolated place during the harsh winter: from cabin fever to seasonal affective disorder spiced with a strong heartbreak."

It's been a struggle for me because I had a chance to be white and refused.

RAMIRO GOMEZ
"...when these luxury items are acquired, or these homes are purchased, it takes people's labor to maintain them and keep up appearances. I've observed that so much about the affluent lifestyle is image based, and yet, behind the image is a reality that isn't easy for people to see."

Last night's Itchy & Scratchy was, without a doubt, the worst episode ever. Rest assured I was on the internet within minutes registering my disgust throughout the world. - Comic Book Guy, The Simpsons

JOSH REAMES
"It's comforting to know that ex-presidents, art students, and seasoned artists are all using the same methods of sourcing images - that's true democracy. It seems silly to try and "ignore" the Internet, I don't think it's going anywhere. It is not like baggy pants or disco."

Capitalism tries for a delicate balance: It attempts to work things out so that everyone gets just enough stuff to keep them from getting violent and trying to take other people's stuff. - George Carlin

"IF my best chance at making a living entails the intellectual property rights for the manufacture of synthetic dirt, then I can only hope that a liberal capitalist democracy such as ours will afford a niche in which to ply my trade!"

If it's true that our species is alone in the universe, then I'd have to say that the universe aimed rather low and settled for very little. - George Carlin

DEB SOKOLOW
"...Frank Lloyd Wright's sadistic streak with secretaries, the side effects from the methamphetamine cocktails cursing through JFK's veins, briefcase exchanges occurring in the bathrooms of a certain fast food restaurant chain, tactics for controlling the minds of others, and revelations regarding how graphic designers and interior decorators actually pay their bills."

Why not just have a "Stupidity Tax?" Just tax the stupid people!

"My theory of course is that these leaders are all villains because when an individual seeks political office it's because there is a lack of something and usually a predisposition to being cynical, hypocritical, ruthlessly ambitious and dishonest."

Hooray for most things!