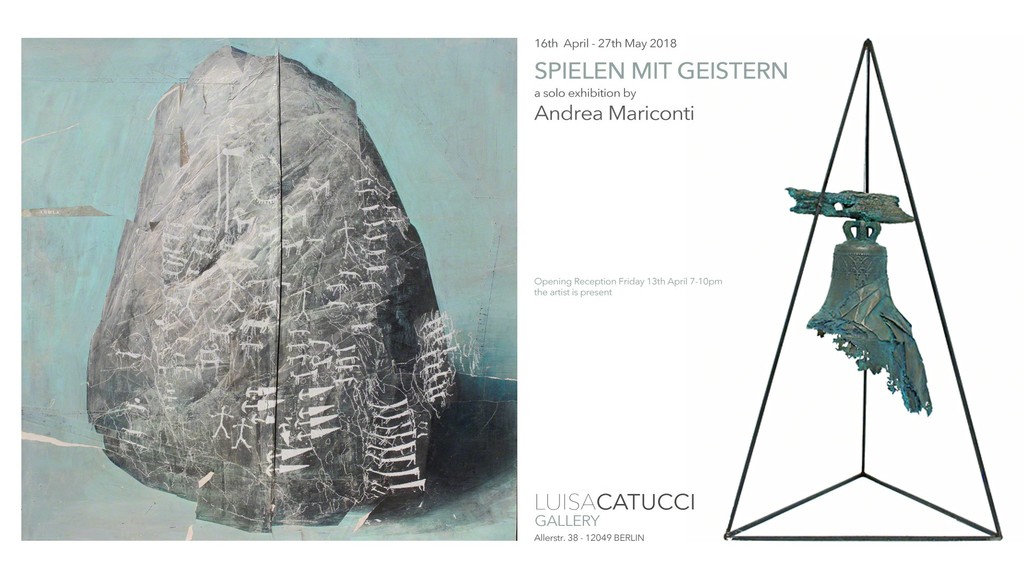 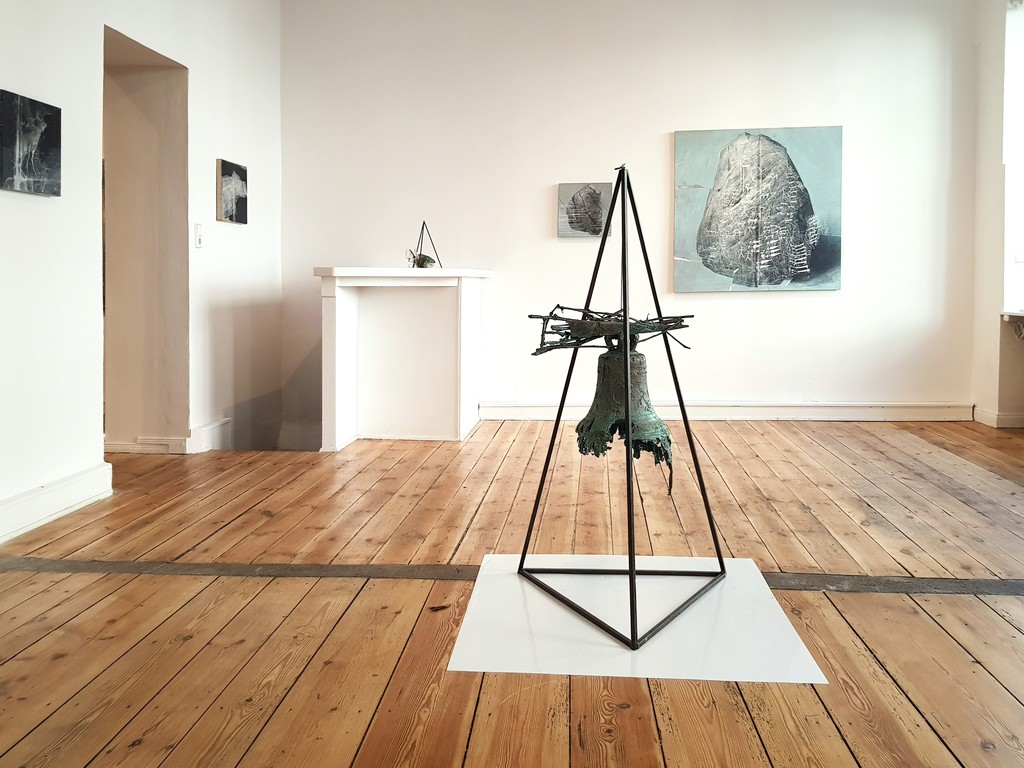 The exhibition of the Italian painter Andrea Mariconti presents some of his most representative recent works.
In the main room of the gallery, there are a series of paintings “A.N.M.L.A.”, inspired by the Menhirs of Val Camoninca, rugged megalithic settlement of North Italy 13000 years old, and to the question “which was the first artistic sign left by humanity?”, a query to which many tried to answer, as Didi-Huberman, in his essay on prints, or Bataille in his text on the Lascaux’s caves, studies attentively analyzed by Mariconti.

From the analysis of this and other rugged settlements, it emerges that the artistic sense, mimetic or symbolic, is present since the first sign left by humanity. The mediation used to happen then as it happens today: the human eye yearning to get back what it observed, forces the hand to fold to the view and to the synthetic thought seeking the shapes of reality, ending by interacting necessarily with the intrinsic textures of the support, whether canvas, paper, wall or monolithic rock.

In the monoliths’ portraits, Mariconti represents the camunan stele in the exact moment its surface was carveled by the artist: the painted rocks seem to have frozen in time.
On their surface, a distinct code moves as a ghost: incisions of masculine objects (axes, animals, men, sun) and feminine ones (dresses, jewelry, spirals).
This code is the most ephemeral condensation of art history, and ground of the subliminal language of both genders. It defines a blurred temporal horizon, as if it would be swinging from picture to picture, hidden behind the surface and unaltered by the time passing.

The ghostly code becomes the real center of the exhibition, since it’s on this that the artist’s intervention focuses, being the binding element of all the artworks here exhibited: the series “A.N.M.L.A.”, the portraits and the sculptures.

The contemporary is inevitably the result of what has been done previously and it is this constant flow of humanity’s artistic history to mostly fascinate Mariconti, free of limitations and labels.
In the center of the room, the sculpture of Neuma I is exposed, realised in bronze lost wax at the Fonderia Allanconi, a peculiar place with 450 years old ancient tradition. Metallurgy and science of metals’ transformation, have been gigantic discoveries for the history of arts. In Val Camonica they define the passage from the stone age to the copper one. The bronze is an alloy between tin and copper, two of the most precious minerals, that in order to be used needs to boil at 1200° celsius, then dropped into the “mouth” of the receiving sculpture. What defines Mariconti’s artistic approach is the investigation of this primordial science, by interfering with it, breaking it, re-elaborating it in a contemporary way while adding interruptions in the bronze fusion’s free fall.
“Neuma” is the proto-note, when humanity didn’t know what musical composition was and gave this name to those sound particles coming out the singing voice. Etymologically Neuma is bonded to the concept of breath, with a clear accent on human’s voice.The series of portraits exposed in the gallery’s back room confirms, as humanistic approach, the central position of the individual in both his role of demiurge and receiver of the ghost code, a sort of representation of the full body of the history of arts.

Well known in the Italian art scene for his pictorial and compositional technique, Mariconti realizes his paintings with sapient personalized mixture, recept developed during the years by mixing oil colors, vegetal extracts, ashes, earth, carbon oxide and motor oil. By combining masterfully paper and canvas, Mariconti’s paintings reveal surprising textures and cuts, emphasized by the consistency of the materials used in the mixture self and by his brush stroke, gestural and controlled at the same time.
The foldings and cuts born out the interaction between the different supports and the presence of subtle graphic elements, place the work of this Italian painter, strong of his classicism of his compositional origins, into the most contemporary and innovative pictorial scene.