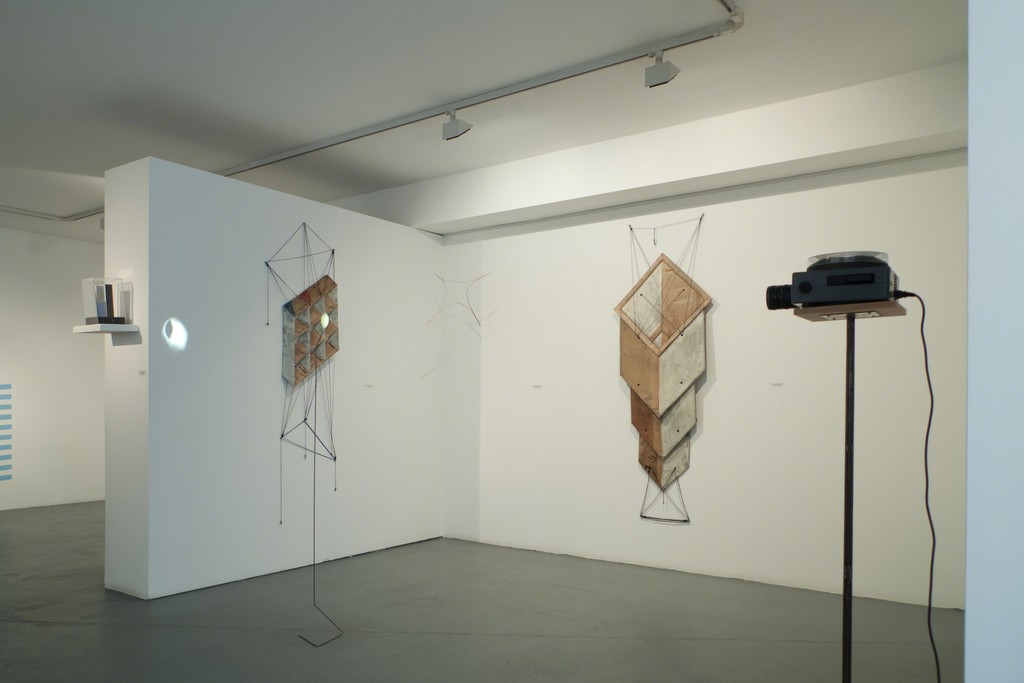 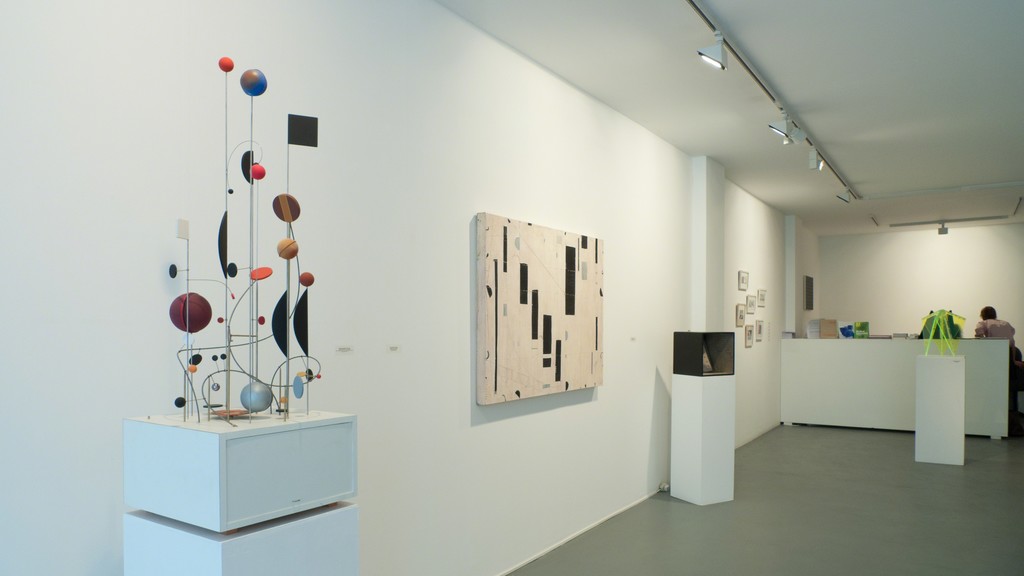 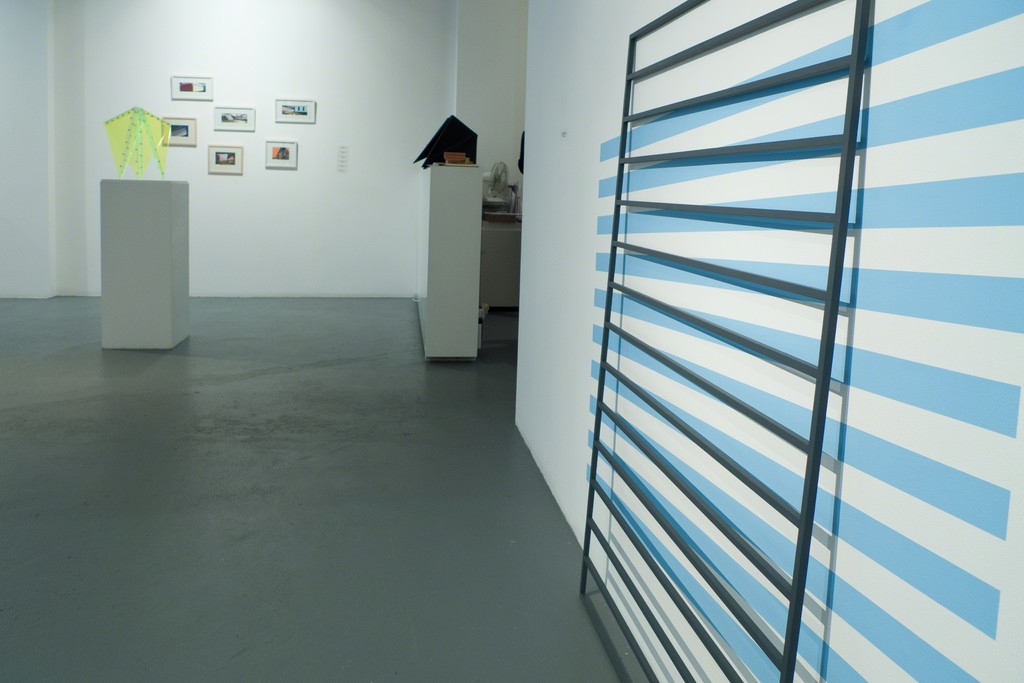 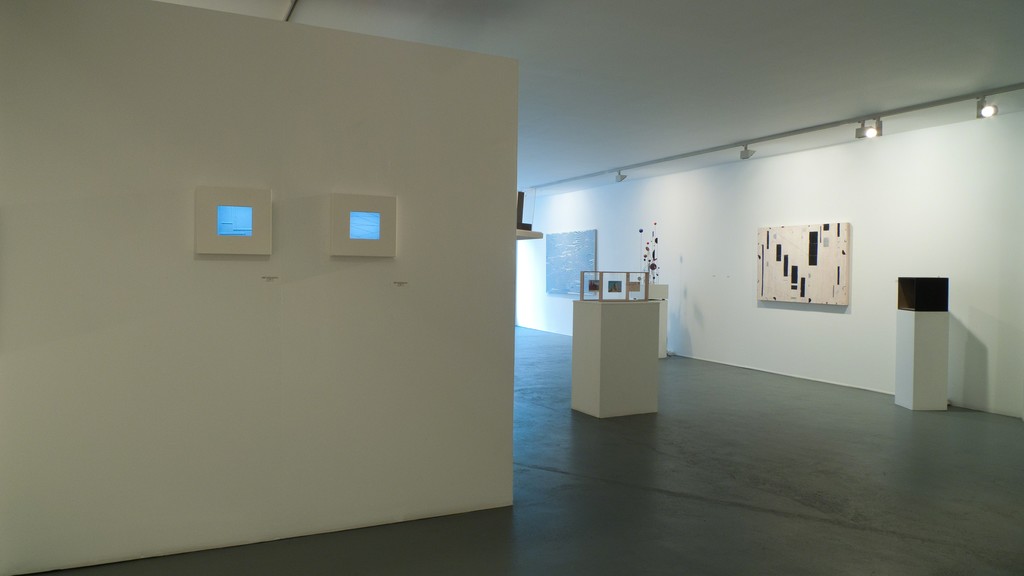 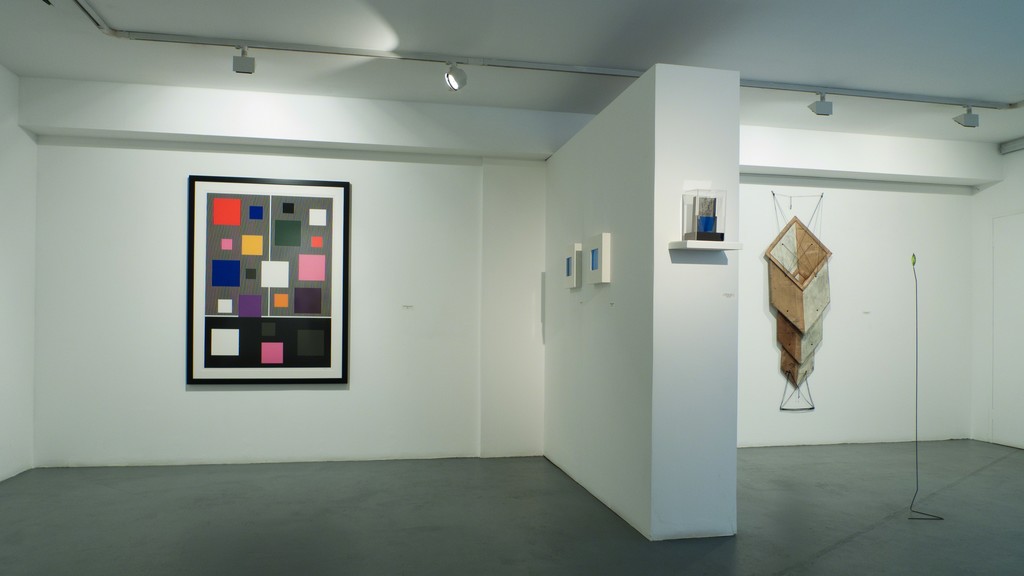 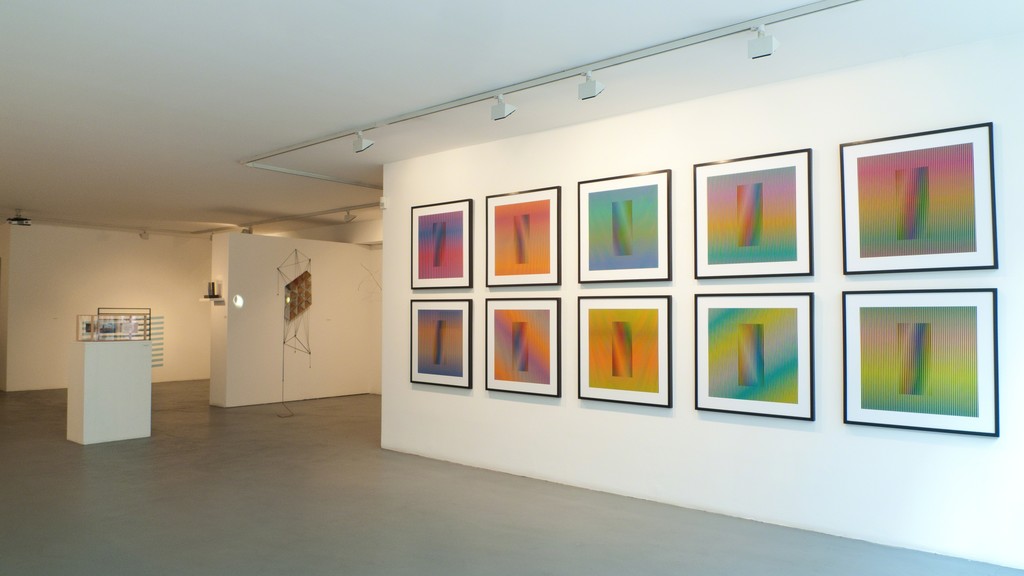 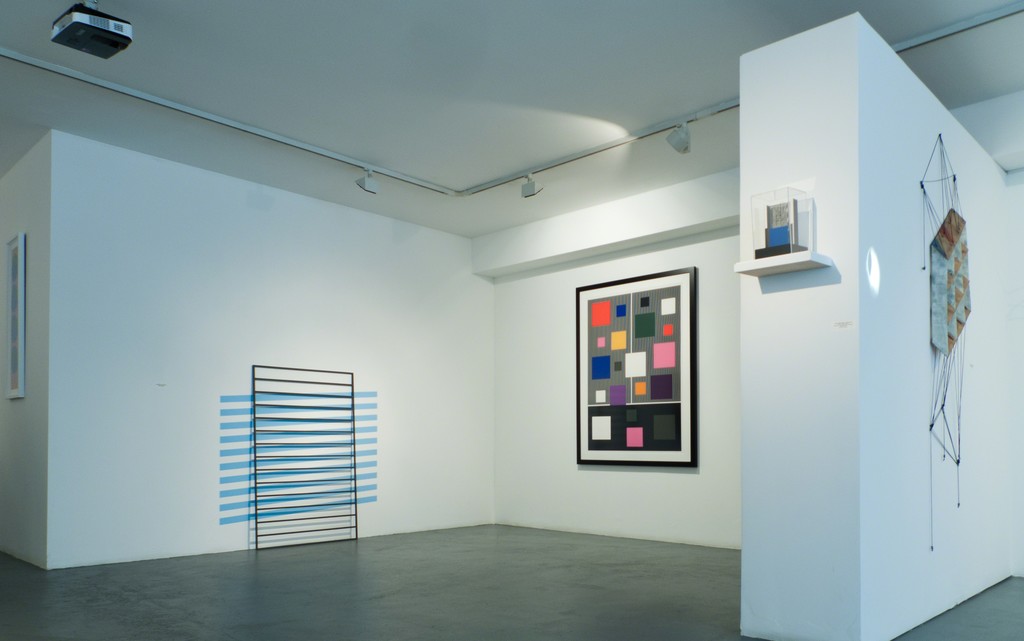 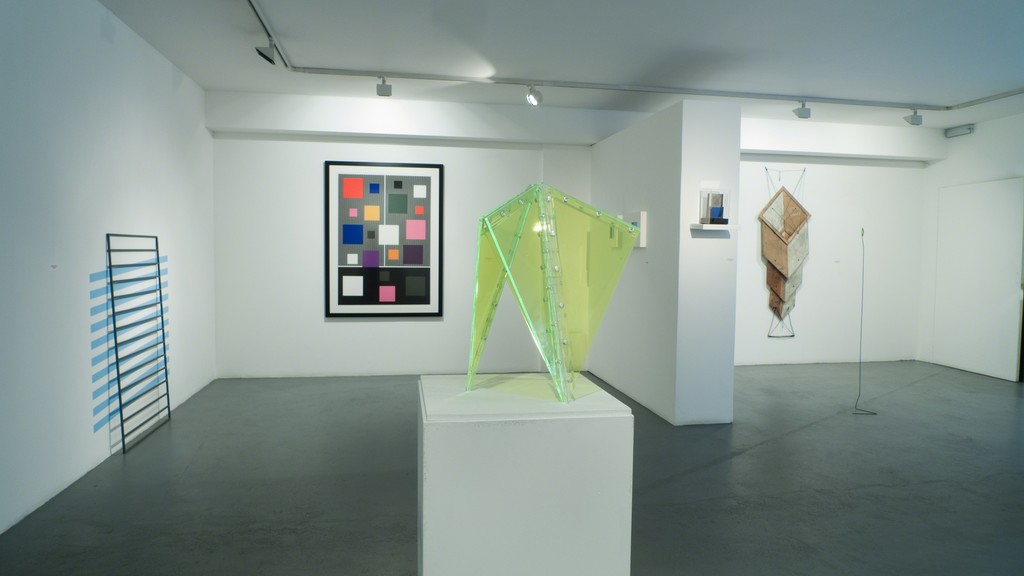 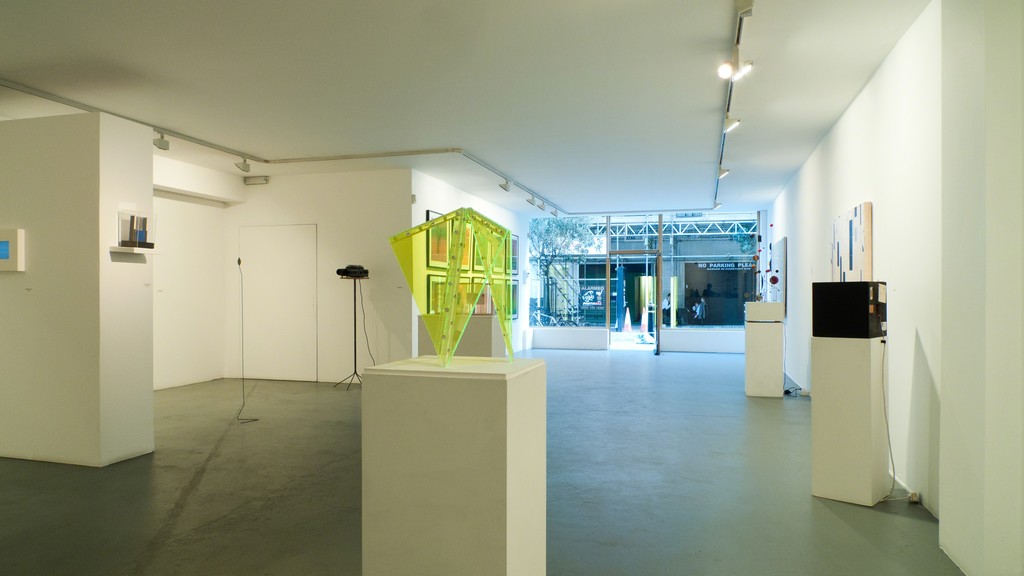 Maddox Arts has long been a London-platform for the wealth of talent in modern and contemporary art from Latin America. With Degrees of Separation, curated by Mario Palencia and Laura Culpan, this exhibition will look specifically at the legacy of the Modern Masters born in the 1920s who were pioneering geometric abstraction and kinetic art across Latin America in the 1950s and 60s and how the younger generation is carrying this aesthetic on, in their own contemporary way.
Presenting works by Modern Masters, Jesús Rafael Soto and Carlos Cruz-Diez who are widely regarded as two of the most influential of this generation. Cruz-Diez’s work is a constant research in to the visual and perceptual experiences of colour. On show at Maddox is a portfolio of 10 prints “Chromatic Inductions in Double Frequency” that make for an impressive and, quite literally, eye- catching entrance. Abraham Palatnik and Julio Le Parc who were both born in 1928 hailing respectively from Brazil and Argentina, were both leading figures within the geometric abstract and kinetic art movements, for Degrees of Separation original kinetic works from the 60s will be on show.
In discourse with these Modern Masters, the younger generation of artists investigate abstraction in various ways: Magdalena Fernandez’s practice contains an ongoing dialogue with Modernism, in her work Fernandez has a direct ‘conversation’ with the likes of Lygia Clark, Helio Oiticica and Mondrian (in works such as 1iHO008 Homenaje a Hélio Oiticica, 2010, she animates Oiticica’s static abstract compositions in such a way that the forms flow and morph and change their orientation). She works in sculpture, video installation, architectural installation and print, with a background in mathematics, physics and graphic design (she studied under renowned Italian designer Fronzoni): there is rigour and precision found throughout her work. Along with Fernandez, Daniel Medina, Rafael Reveron-Pojan and Jaime Tarazona all contribute works that have an unequivocal discourse with the Modern Masters.
Medina’s wall installation ‘Reja--Dispositivo Cinético/Social’ is taken from a series of works that see abstract coloured lines painted directly onto the wall, an aesthetic that references both Cruz-Diez and Sotto. Leaning against the wall drawing, however, we see a weighty, steel gate-like structure that serves as a poignant reminder of the uncertain security situation in the artist’s hometown of Caracas.
Reveron-Pojan will show a sculpture and series of small works entitled Homage to Gego in which he embroiders abstract forms on to postcards meanwhile Tarazona, who often uses found images such as maps, books and postcards has intervened on a series of postcards with collaged abstract forms that obscure the well-known vistas with modernist looking architectural over-ridings.
Marta Chilindrón, showing in the UK for the first time, explores geometry and abstraction in the third dimension (that also cleverly sit comfortably in 2D). She uses sculptural forms that require interaction to change and interchange shape, she says: “My focus has always been on questioning the accuracy of our perception, our interpretation of reality. I have tried to capture the state of flux of everything (.....) I explore the ideas of sequencing, beginning and end, making objects that are simple networks with no definite shape and that exist between the second and third dimension with infinite possible configurations.”
Caio Fonseca was born in the USA but of Uruguayan descent: his father was the well-respected sculptor Gonzalo Fonseca. Ciao Fonseca, works between the US and Italy (Pietrasanta), he studied under Augusto Torres in Barcelona (who worked with Picasso and Mondrian) and whose roots were firmly within Latin American and European Modernism. Fonseca however, has developed his own formal language of abstraction and a unique process of painting. His compositions emerge almost via notions of elimination. The shapes and colours on his canvases are imbued with tone and texture that, notwithstanding the extreme flatness in the work, still maintain a sense of space, depth and harmony between the forms.
Meanwhile Cipriano Martinez’s works provide a vast landscape of abstract geometric shapes. Almost like enlarged pixels, they form rigorous patterns across the canvas. Even though the aesthetic is formal and abstract, the inspiration for his work comes from the cityscape. The lines and shapes with all their imperfection look like the vast metropolis of the overcrowded urban environment zoomed out and obscured beyond recognition. From the urban cityscape to the jungle, Daniel Steegmann Mangrané uses nature – often the Amazon - as his subject matter and background, on to which he imposes a man-made form, usually an abstract shape, that juxtaposes and contrasts. The forms are delicate but jarring, and within there may be underlying social-political or environmental issues subtly put to question.
With Degrees of Separation at Maddox Arts the intent is to show a connection: a connection between generations, countries and continents. Back in the 1950s, 60s and 70s there may not have been the same instant exchange of information and communications as seen today, however there was a great discourse happening between Europe and Latin America. The artists travelled and studied abroad bringing home new ideas and visions and fostering new aesthetics. It is therefore interesting to see how the younger generation – who travel ‘virtually’ on a daily basis – has maintained a connection to the geometric abstract and kinetic art of their past, yet all of the artists have developed their own unique voice and artistic language that carries forth these notes of abstraction.