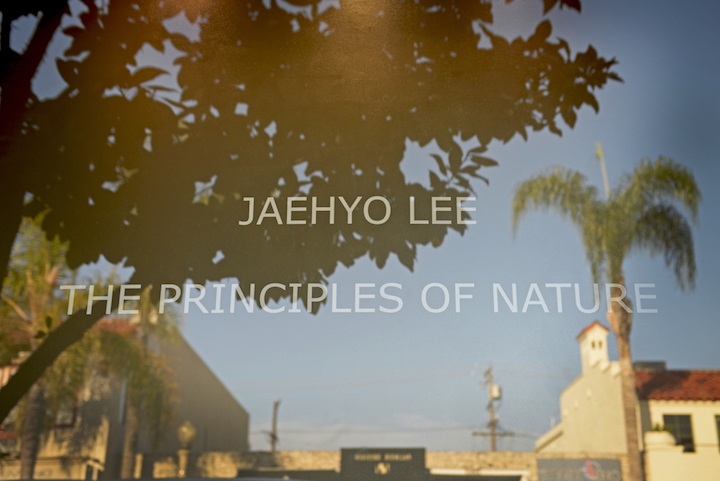 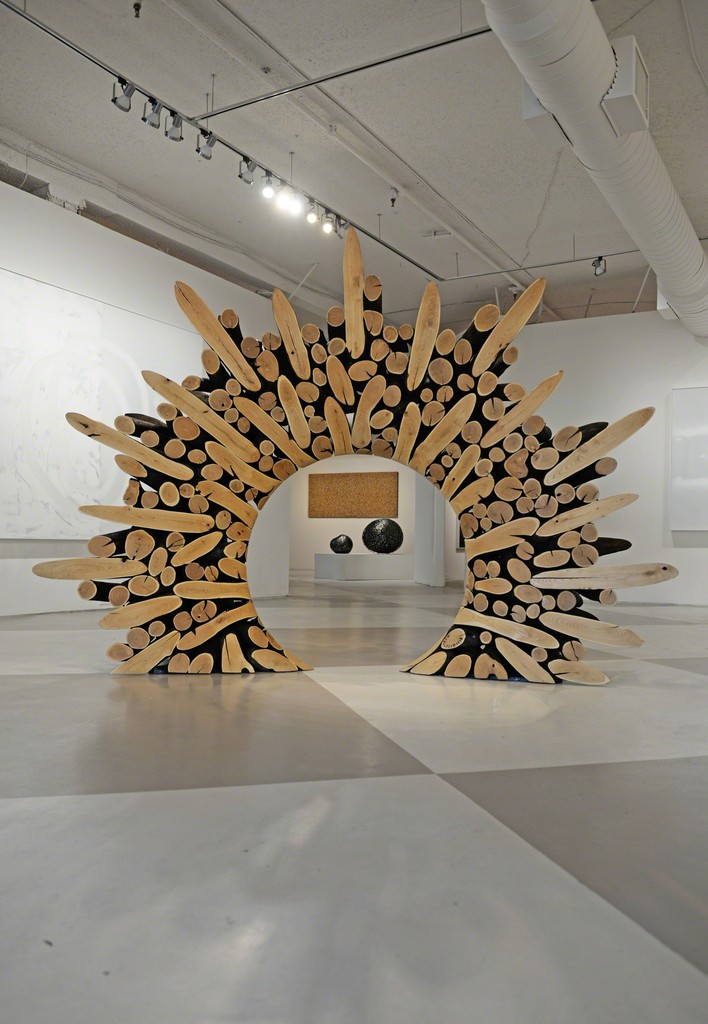 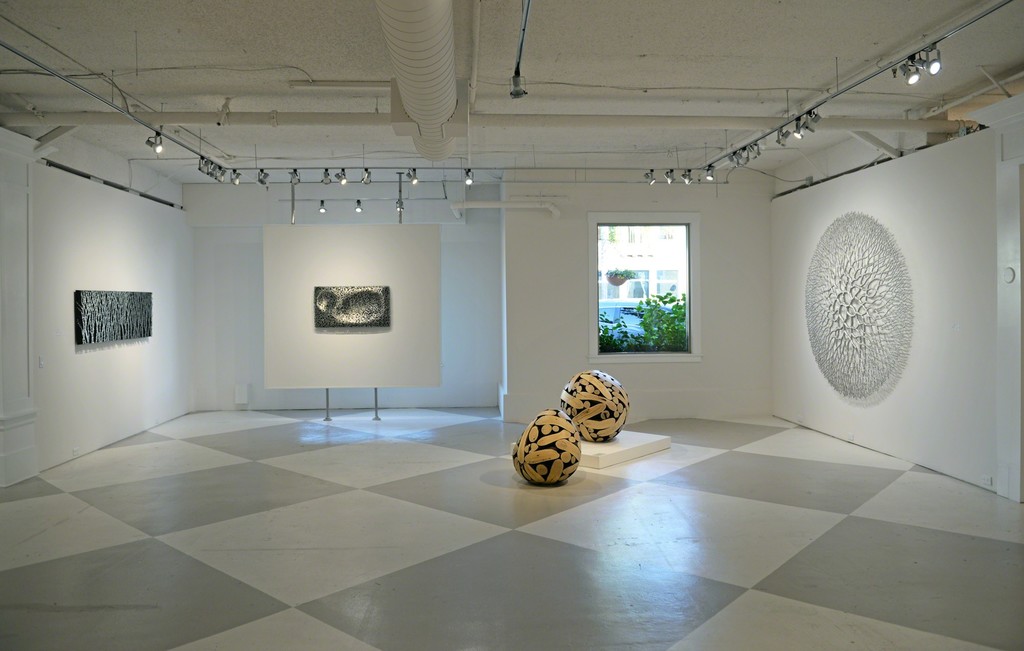 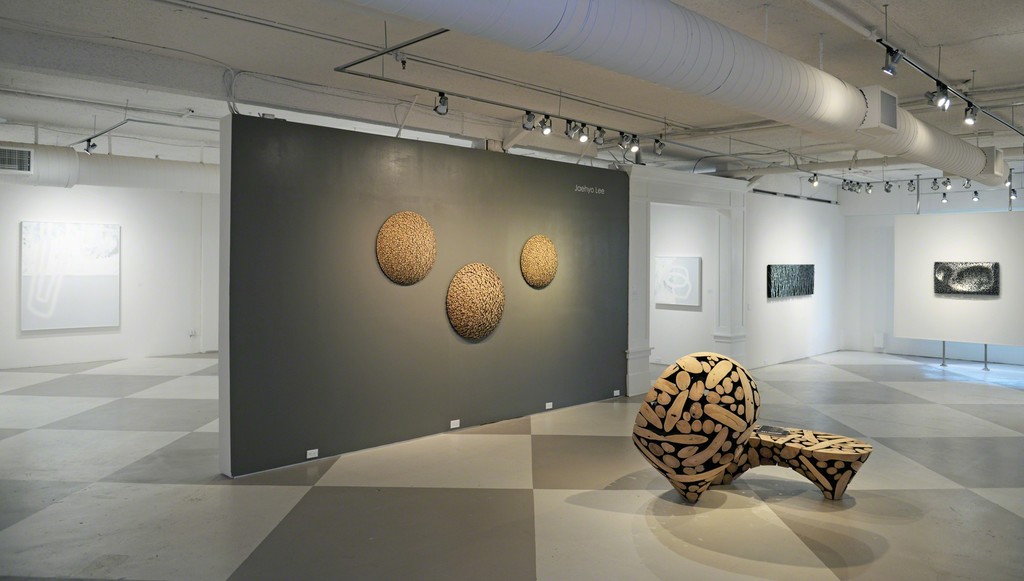 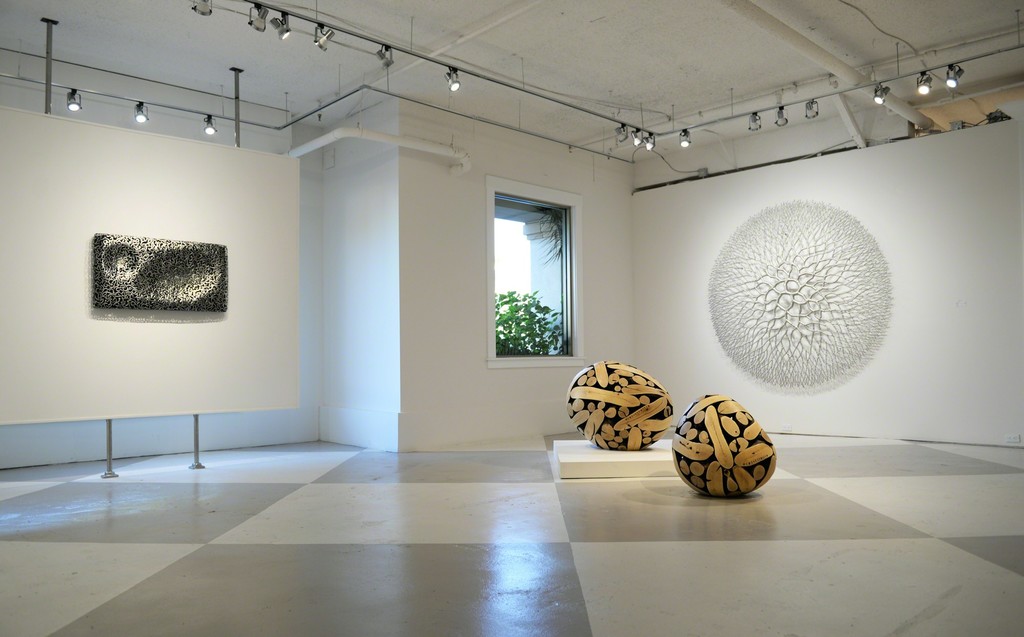 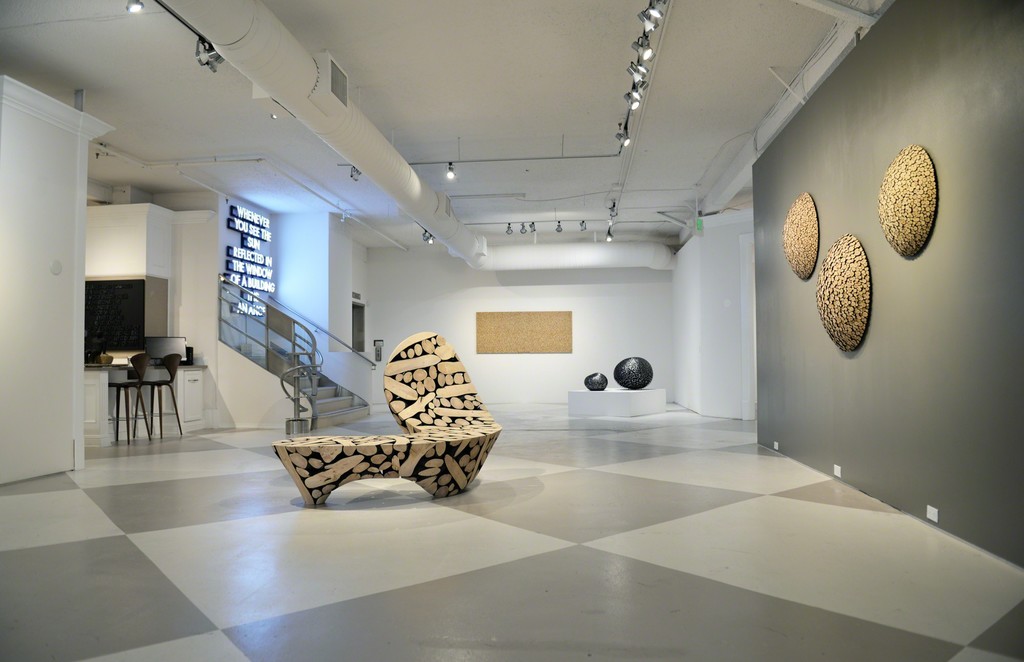 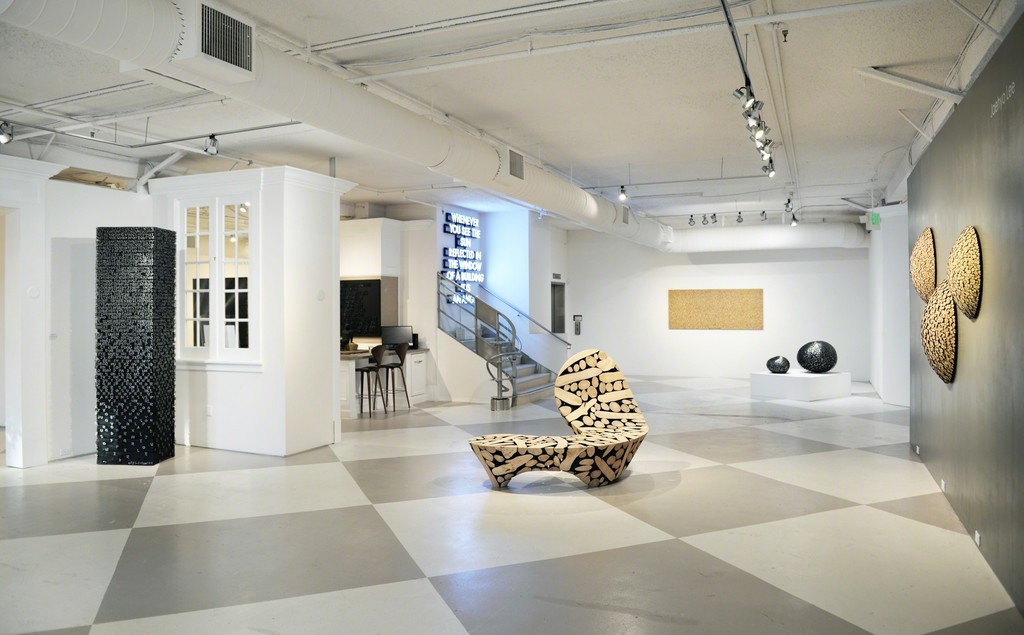 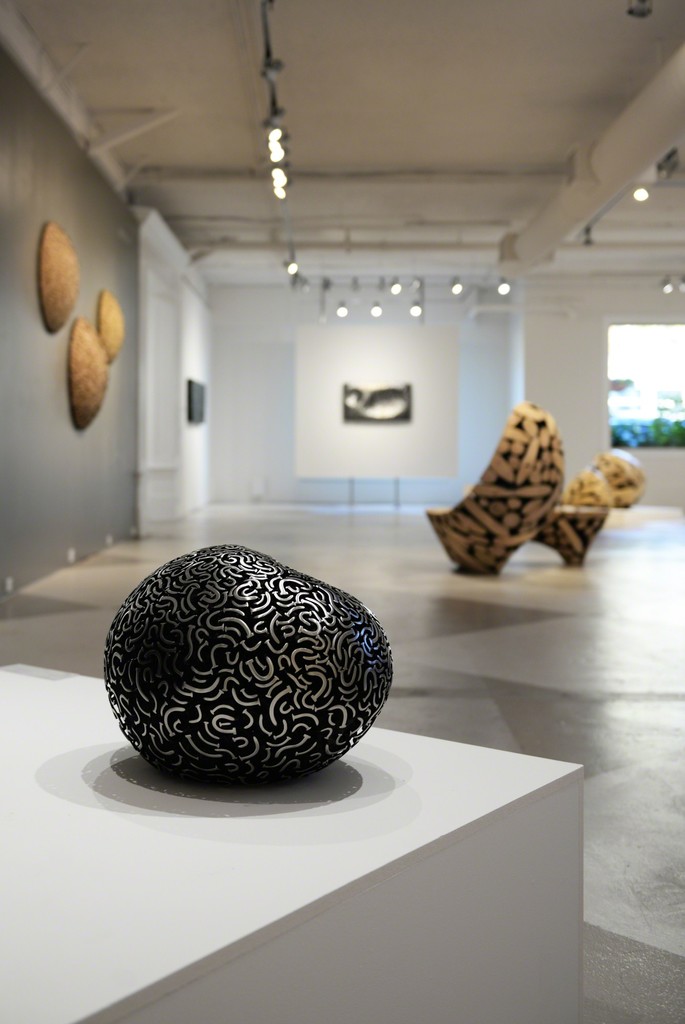 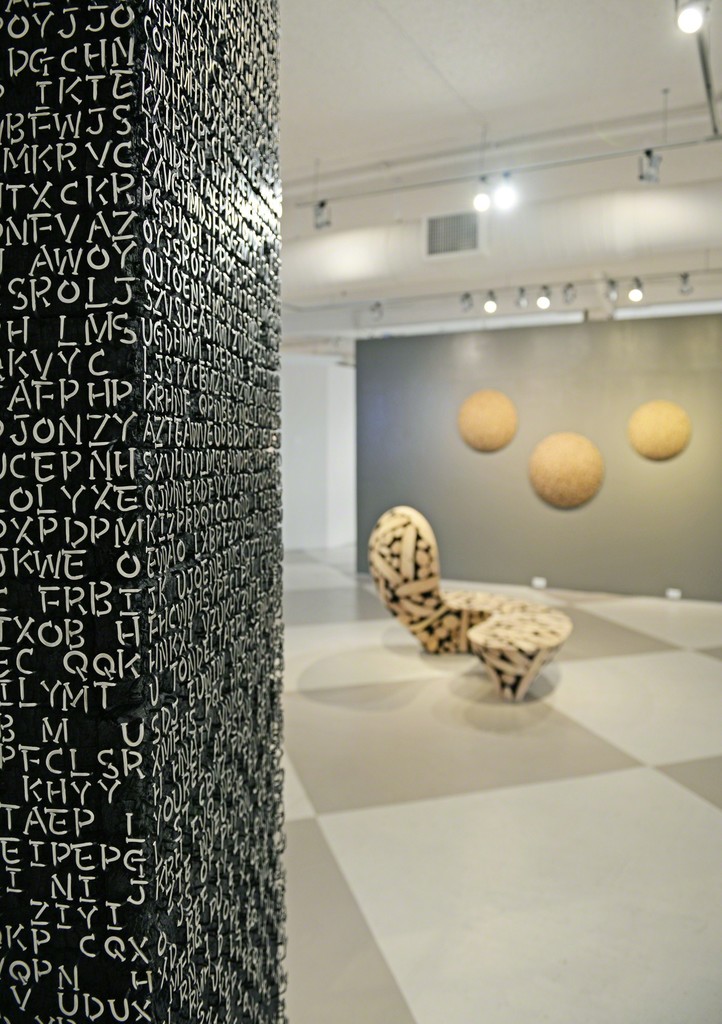 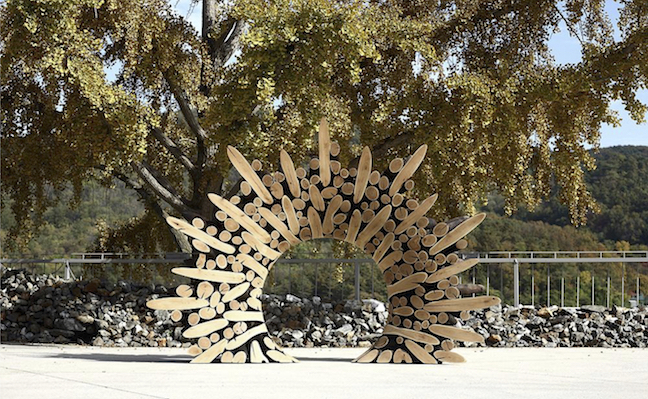 La Jolla, October 17th, 2016 – Madison Gallery presents noted South Korean artist Jaehyo Lee’s second solo exhibition, The Principles of Nature. The artist creates a direct narrative with nature in his innovative approach and creative process. Combining distinct traces of Land Art, Arte Povera and Minimalism Lee´s works cast a questioning eye over the roots of form, its function and its role within the natural world. The sculptures of polished big cone pine, larch, and chestnut act in unison, embodying both natural and manmade forms; they enhance the natural possibilities of the wood, a material with suggestively lyrical qualities. Lee not only makes projects about nature, he also works within nature, so that his sculptures both describe and exemplify the natural world.
Some of his wooden sculptures might appear as though the spaces between the trunks have been filled in with a black substance but this is merely due to the effects of charring and shadows. To apply a finishing touch to his wood and nails sculptures, Jaehyo Lee first burns the materials and then sands down the exposed faces to create a high contrasting colours. Texture is important to the artist, as he emphazises the façade of the wood. The surface reveals the character of its making, becoming indicative of the creative process and holding interest by itself.
Jaehyo Lee’s artwork plays with the oft-contested boundaries between contemporary art and design. Lee’s works are widely collected in public and private collections across Europe, Asia and North America. Amongst many other distinctions Jaehyo was in 1998 Grand Prize Winner at the Osaka Triennial and in 2002 recipient of the prestigious Irish Sculpture in Woodland commission.

Founded in 2001, Madison Gallery is committed to representing emerging, mid-career and established international artists whom work in a range of media. Inspired by an earnest dedication and passion for art, the gallery consistently exhibits a high standard of contemporary art. Madison Gallery works closely in building private, corporate and public collections thus placing it amongst the leading contemporary galleries in California. Blouin Modern Painters Magazine has recognized our program for the fourth year in a row as one of the Top 500 galleries worldwide.