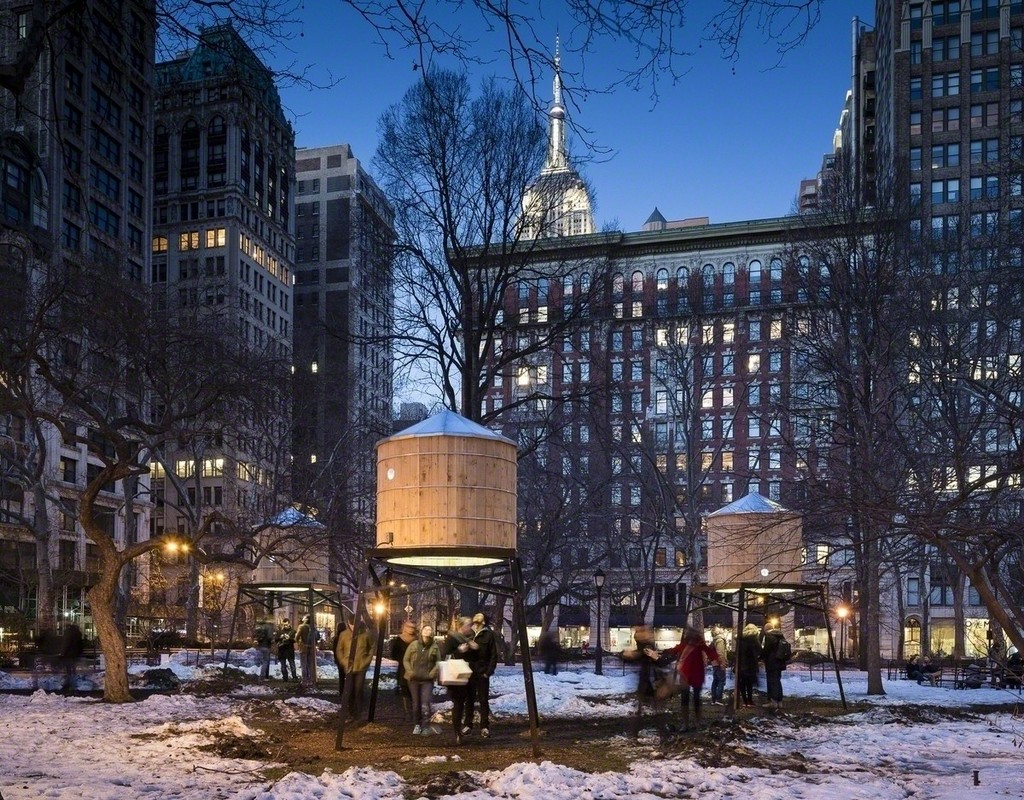 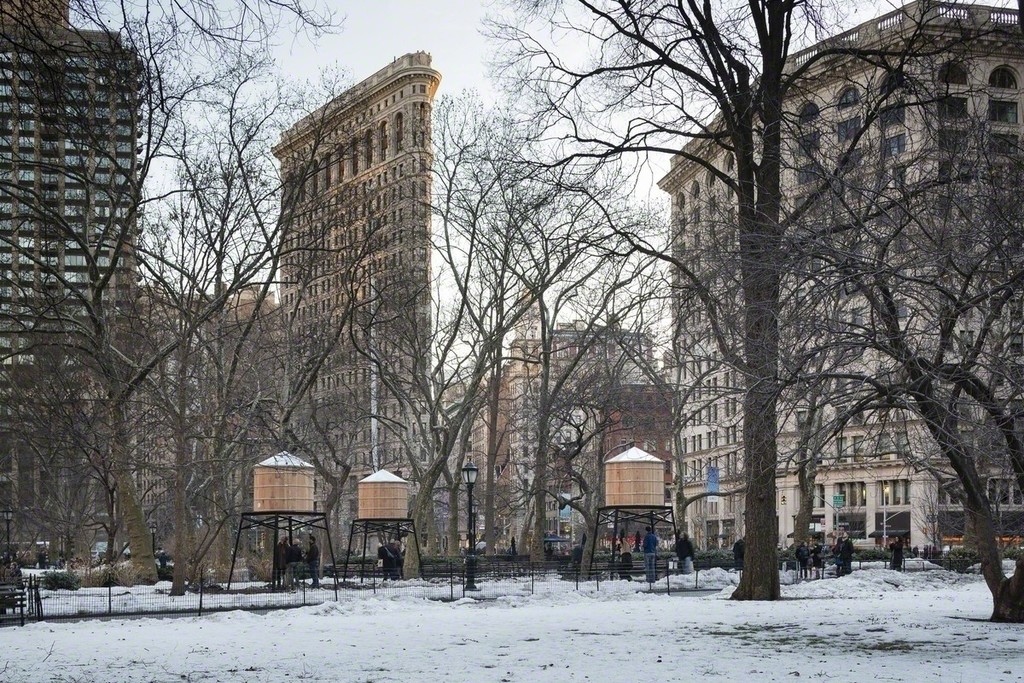 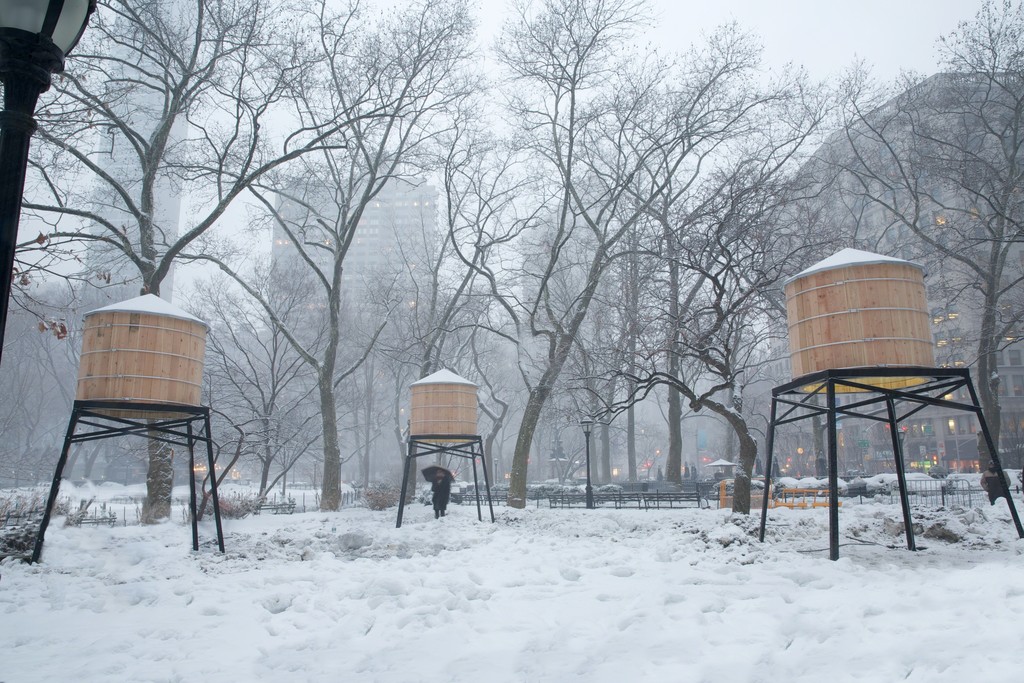 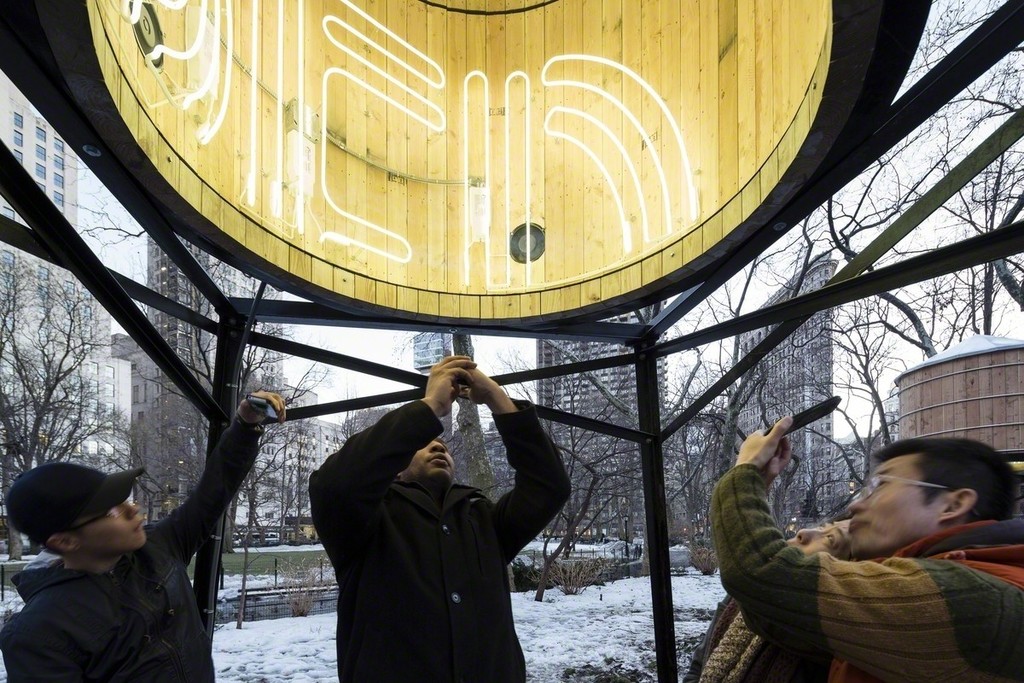 New York—Madison Square Park Conservancy’s Mad. Sq. Art announces a new sculptural installation for late winter 2014: This Land Is Your Land by Brooklyn-based Chilean artist Iván Navarro. The site-specific installation presents three water towers inside of which neon reflections repeat infinitely. The sculptures merge a staple of the New York skyline with the street-level landscape of the Park. The artist takes the exhibition’s title from the beloved 1940 Woody Guthrie folk song, which is both an American anthem and a vocal pull to the freedoms offered in this country for an immigrant population. The towers are elevated to a height above visitors’ heads, allowing them to walk underneath and look up into each sculpture to view the content within. The exhibition is on view daily from February 20 – April 13, 2014 in Madison Square Park.

Navarro’s water towers—each measuring approximately seven feet in diameter and standing on roughly eight-foot-tall supports—will function as vessels for a vocabulary of the political and personal experience of immigration. The interior of one tower will feature the words “me” and “we”, another will feature the word “bed”, and a third will display the image of a ladder—all of which will be composed of neon light. An internal arrangement of mirrors will enable each word or image to repeat perpetually through a seemingly endless vertical space.

Martin Friedman Senior Curator of the Madison Square Park Conservancy, Brooke Kamin Rapaport comments: "Iván Navarro uses memory—as a child during the brutal Pinochet regime in Chile—and reflection—on the freedoms of the American experience—to create This Land Is Your Land. This project is significant for our program because Navarro's work tackles issues pertaining to democracy, social structure and how language can simultaneously manifest liberation and oppression. While wood water tanks are a ubiquitous sight on New York City's rooftops, the artist loads them with substantive content demonstrating how sculpture can function as object and as a messenger of critical issues today."

This Land Is Your Land is a carefully chosen title for Navarro: it represents the vast expanse of the American landscape and a democratic society pursued by millions of people. Like Guthrie’s song, which repeats the phrase “This land was made for you and me,” Navarro’s hope is for access to this country by those who are foreign-born.
Artist Iván Navarro states: “I like the idea of a reservoir of water. This simple and timeless wooden structure contains water—the most primitive and elemental resource, the essence of human sustenance, and a reminder of the basic condition that all humanity shares. We must guarantee our water in order to survive. In that sense the water tanks are containers of primordial knowledge. Their form and material are equally archaic: they are simple circular huts with conical roofs, made of wood. Less obvious but nonetheless important is their reference to watchtowers due to their elevated position. Although they are benign objects, there is the sense that they are quietly surrounding us, surveying the city below. These water towers metaphorically function as tall ornamental crowns on the tops of the large buildings that dominate the urban landscape. They punctuate the glory of modern civilization while reclaiming its humanity.”

The Madison Square Park installation coincides with the February 2014 release of the first monograph on Iván Navarro. Written by Cay Sophie Rabinowitz with contributions by Hilarie M. Sheets and Paul Kasmin Gallery, Iván Navarro is published by Skira Rizzoli.

Iván Navarro (b. 1972 in Santiago, Chile; lives and works in Brooklyn, New York) is internationally renowned for his socio-politically charged sculptures of neon, fluorescent and incandescent light. In 2009, he represented Chile in at the 53rd Venice Biennale.