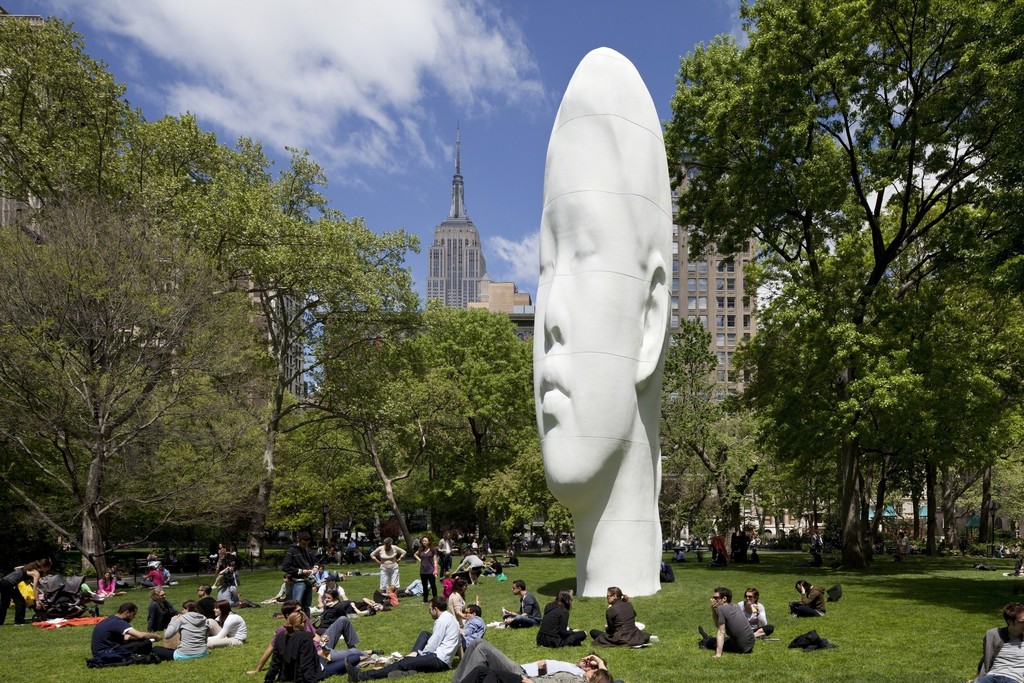 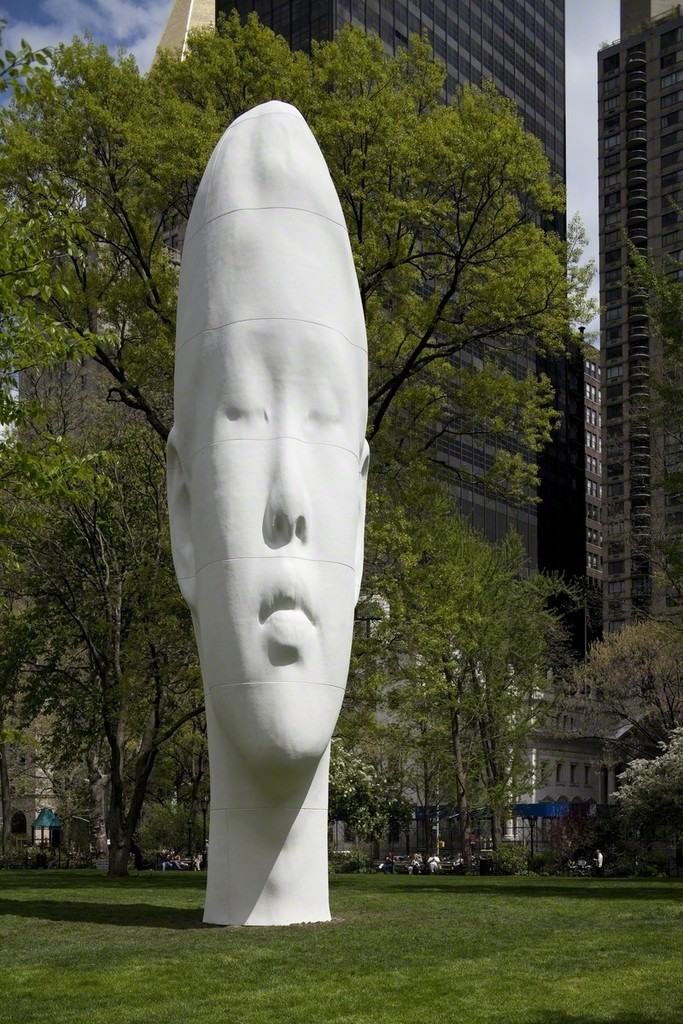 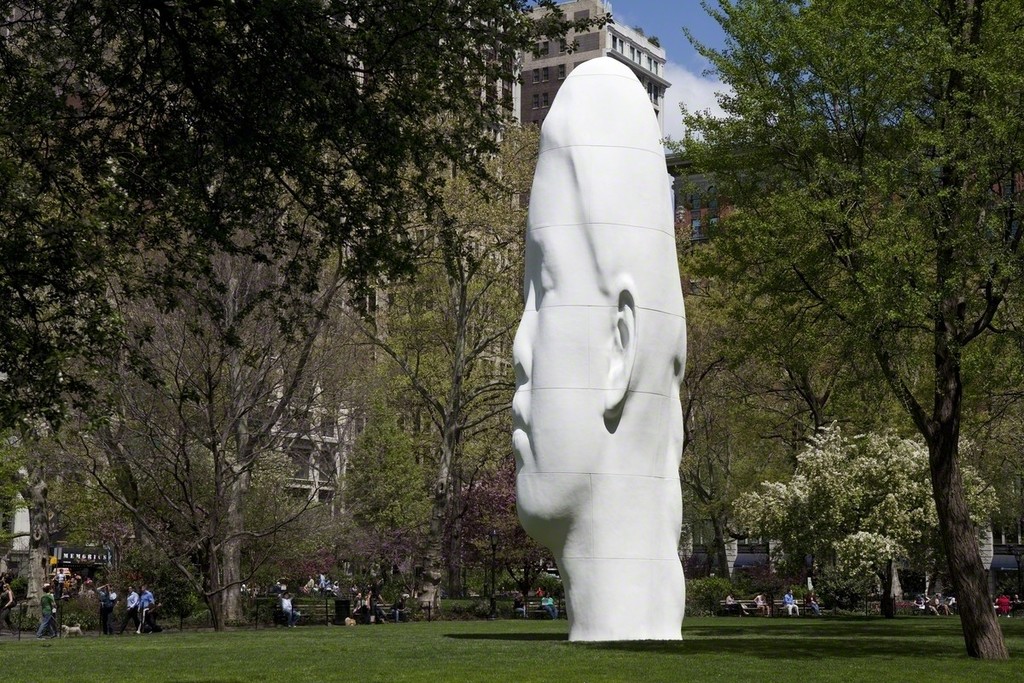 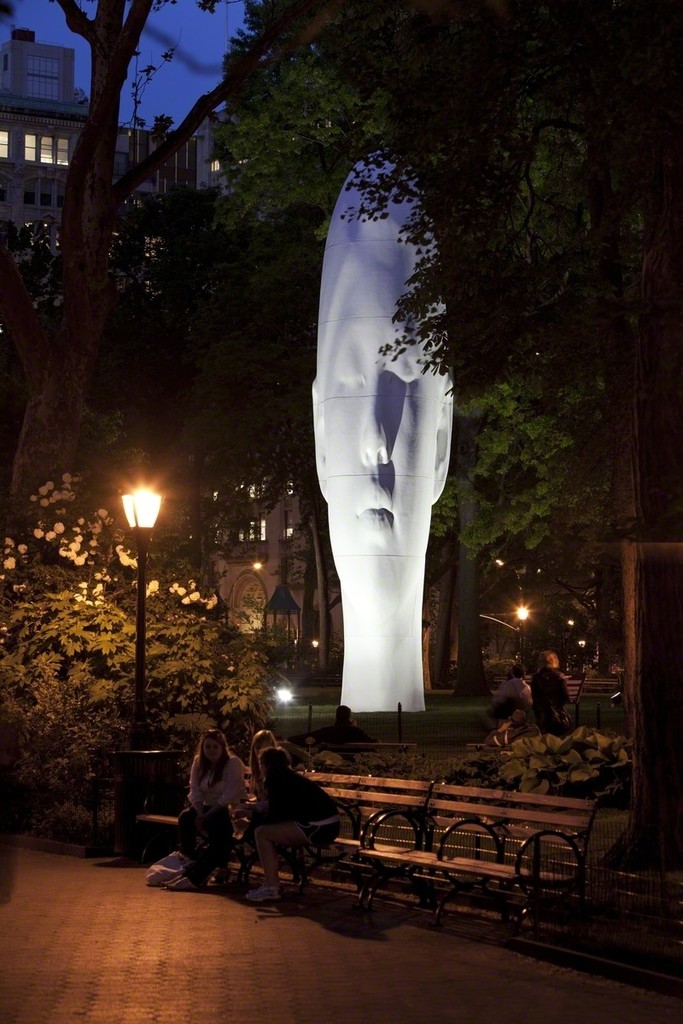 Echo, Plensa’s new site-specific installation serves as a monument to everyday people, both within and without Madison Square Park. Creatively inspired by the presence of the 9-year old daughter of a restaurant proprietor near Plensa’s home in Barcelona, the 44-feet tall sculpture comprised of white fiberglass resin depicts the face of this inspiring young girl in a dream state from the neck, up. Plensa’s sculpture, made from marble gel-coated fiberglass-reinforced plastic, will be sited on the central Oval Lawn of Madison Square Park. Its monumental size and vertical orientation reflect the park’s surrounding architecture, while the visage of the sculptor’s subject exudes a welcoming tranquility perfectly suited to this cherished urban oasis.

Drawing inspiration from the presence of a real person in real time, Plensa’s monumental sculpture also references the myth of the Greek nymph Echo. According to Greek mythology, Echo was a nymph, who loved her own voice until it was later taken. From that point forward the legend tells of Echo being able to utter the thoughts of others but not her own. Jaume Plensa’s Echo plays on the tale of this Greek myth, creating a sculpture of massive scale drawing parallels to the Greek Echo’s origins as a mountain nymph. The reference is carried further by the artist’s decision to depict the young 9-year old girl’s face in a dream state, translating this massive sculptural portrait into a physical monument of all the voices and thoughts of others internalized by Madison Square Park as by the nymph in the myth of Echo.

Artist Jaume Plensa comments: Echo is the representation of the head of a young girl in a dream state. If in the myth of the nymph Echo, she was forced by the goddess to repeat the words uttered by others, in my project, the head becomes a mirror in where people can see themselves. With this work I aim to introduce quietness and serenity in Madison Square Park, to transform the Park further into a place to rest and dream. With Echo, I aim to create a new intimate place in the heart of NY, in where we can finally repeat the real words of our souls.”

“The Madison Square Park Conservancy is thrilled to present the New York City public art debut of Jaume Plensa, an artist who has contributed so much to the field of contemporary art in cities all around the world,” said Debbie Landau, President of the Madison Square Park Conservancy. “Jaume is an extraordinary artist and an incredibly compassionate person, qualities which are reflected in works of art that poetically bridge the boundaries between many different nationalities and cultures. Madison Square Park is a cherished public space at the heart of a culturally diverse city, making it the ideal home for the monumental and celebratory Echo, which itself is a perfect reflection of the vibrancy, vitality and optimism of New York City.”

Jaume Plensa, born and based in Barcelona, is one of the world’s leading contemporary sculptors. Working in a wide variety of materials, Plensa has invigorated the practice of figurative sculpture with works that examine the intersection of the human form, language and communication, and global citizenship. He was made a Chevalier des Arts et des Lettres by the French Ministry of Culture in 1993, among many other honors. His public art installations are particularly renowned, and include the legendary Crown Fountain in Chicago’s Millennium Park. Plensa’s 2011 commission for Madison Square Park will constitute his long-awaited New York City public art debut.

Plensa is represented in New York by Galerie Lelong and in Chicago by Richard Gray Gallery.