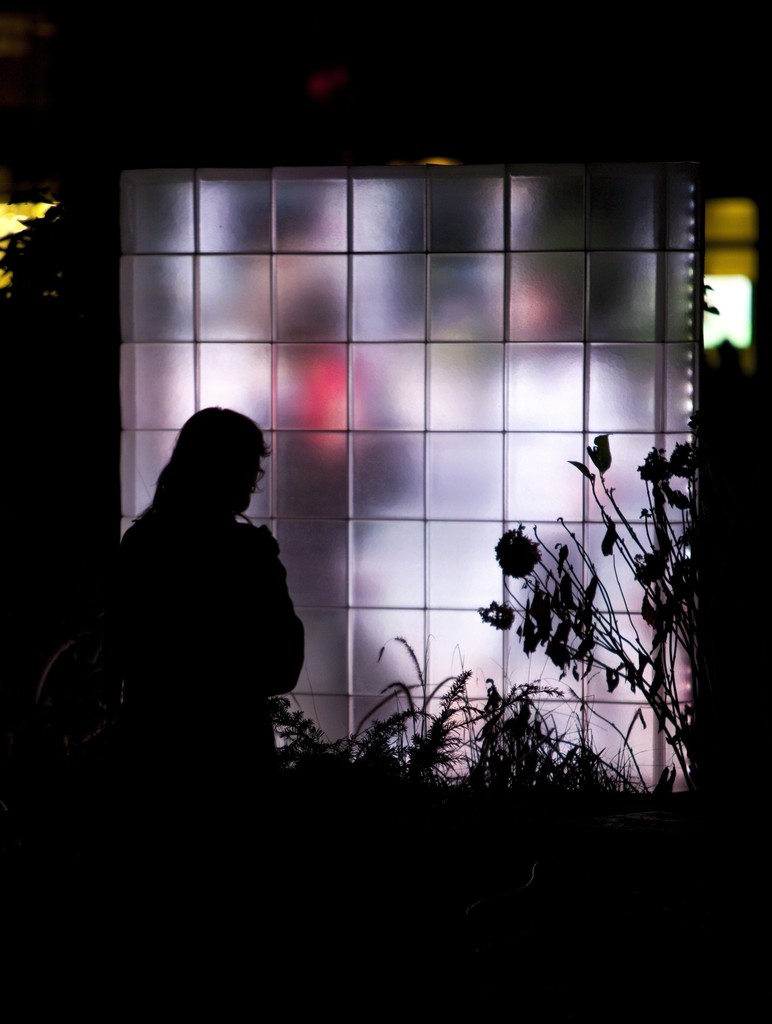 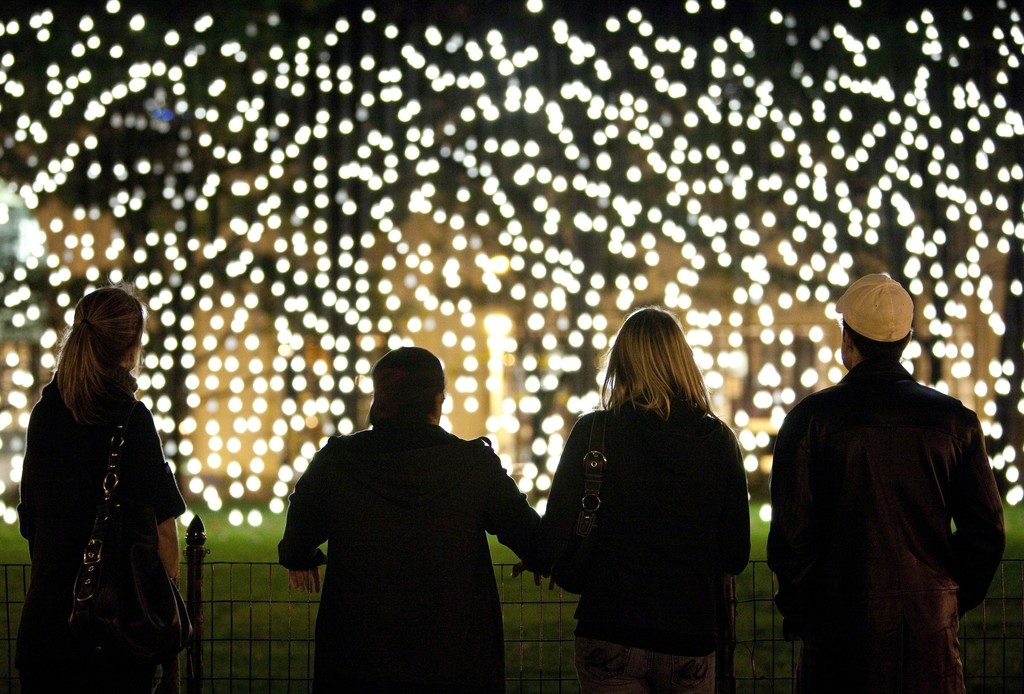 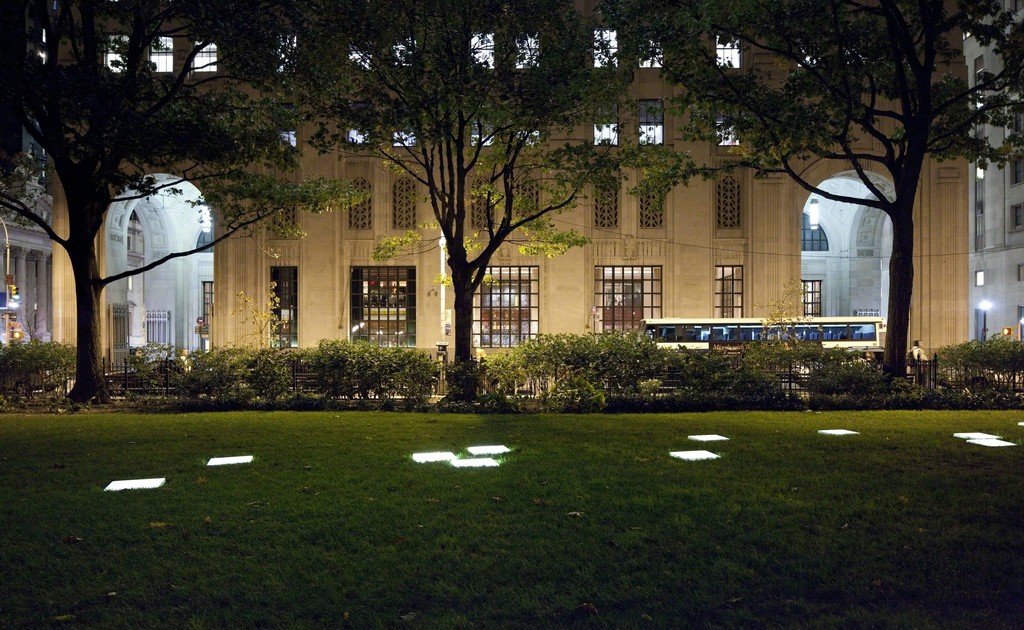 Featuring three new major public art commissions, Jim Campbell’s Scattered Light will blanket Madison Square Park’s Oval Lawn with a 3-D matrix of nearly 2,000 LED lights featuring moving images. For the largest of the three pieces, which shares the name Scattered Light with the exhibition, nearly 2,000 LED lights, encased in standard light-bulb casings, will create a vibrant light grid suspended within a support structure spanning 20 feet high and 80 feet wide, across the center of Madison Square Park’s Oval Lawn. The LED bulbs, engineered to flicker scattered light at the command of computer programming, will create the illusion of figurative images that explore and reflect the human experience amidst the urban landscape. These figures will appear to move across the park’s central Oval Lawn. As one travels around the piece, the vantage point alters and the light figures begin to abstract, blurring the boundaries between image and object. Both abstract and representational, sculptural and image based, Scattered Light will illuminate and activate Madison Square Park with Campbell’s light-based sculptural approach to the concept of contemporary image-making as pixilation in a manner that is at once elegantly simple and quintessentially contemporary.

Scattered Light will feature a second installation, entitled Broken Window, situated near the main entrance to Madison Square Park at 23rd Street and Fifth Avenue. An array of LEDs encased in a glass-brick wall (70”h x 70”w x 10”d) will create illuminated images that appear to glide across the glass plane, reflecting the movements of the city around them and echoing the aesthetic poetry of the Scattered Light installation.

As the third component of Campbell’s forthcoming site-specific installation for Madison Square Park, the artist will present a visual symphony of light timed to pulse in rhythmic patterns reflective of the eclectic sounds of urban subway systems and its travelers beneath the surface of city streets. Voices in the Subway Station will feature 18 glass tablets (14” x 22”) lit from below by LEDs specifically programmed to pulse at intervals and times designated to create a visual orchestra of individual voices in the context of overlapping conversations and subway happenings. Together, the coordinated pulses create a visual wave of light symbolic of the trademark sounds that mark the progression of subway trains rumbling on arrival only to pass and travel forth, carrying the sounds of commuters with them. The new addition to Scattered Light will be situated on the East lawn of Madison Square Park, adjacent to Madison Avenue between 24th and 25th streets.

The artist, Jim Campbell, comments, “I am thrilled to have the opportunity to install my newest and largest scaled light-based installation inside Madison Square Park. Works of art created from light work better in nature and the grand scale of this installation will be enhanced by the interaction between the thousands of visitors to the park each evening.”

President of the Madison Square Park Conservancy Debbie Landau notes, “The pleasure of coming across Jim Campbell and Scattered Light as a public art program, is that we can present art in the City that is of a medium completely relevant of today and today’s New Yorkers. Technology is becoming increasingly more important in both daily life and art and it is a pleasure that we have been able to reflect this in Mad. Sq. Art’s programming from Rafael Lozano-Hemmer’s Pulse Park in 2008, to video installations by Ernie Gehr this past spring, and now looking forward to these new commission by Jim Campbell.”

Born 1965 in Chicago and educated at M.I.T., earning two degrees in Electrical Engineering and Mathematics, Jim Campbell’s inventive fusion of science and art is recognized worldwide. His work has been exhibited to great acclaim at institutions such as the Metropolitan Museum of Art, The Museum of Modern Art, The Smithsonian, The Whitney Museum of American Art, and the San Francisco Museum of Modern Art. He is the honored recipient of various public art commissions and awards including a Guggenheim Fellowship Award, Langlois Foundation Grant, and a Rockefeller Fellowship Award in Multimedia, among others. As an engineer Campbell holds more than a dozen patents in the field of video image processing. His monograph Material Light was published by Hatje Cantz in 2010. Jim Campbell lives and works in San Francisco and is represented by Hosfelt, San Francisco and Bryce Wolkowitz Gallery, New York.

Major Support for Mad. Sq. Art is provided by Founding Partners Agnes Gund and Anonymous. Substantial Support is provided by Ronald A. Pizzuti, Toby Devan Lewis, the Henry Luce Foundation and the Joseph S. and Diane H. Steinberg Charitable Trust. Support for Scattered Light is provided by Bryce Wolkowitz Gallery, The Wall Street Journal, Time Out New York, the Ace Hotel New York, Delta Air Lines, B.Z. and Michael Schwartz, and the Andy Warhol Foundation for the Visual Arts. This project is supported in part with public funds from the New York City Department of Cultural Affairs, in partnership with the City Council.