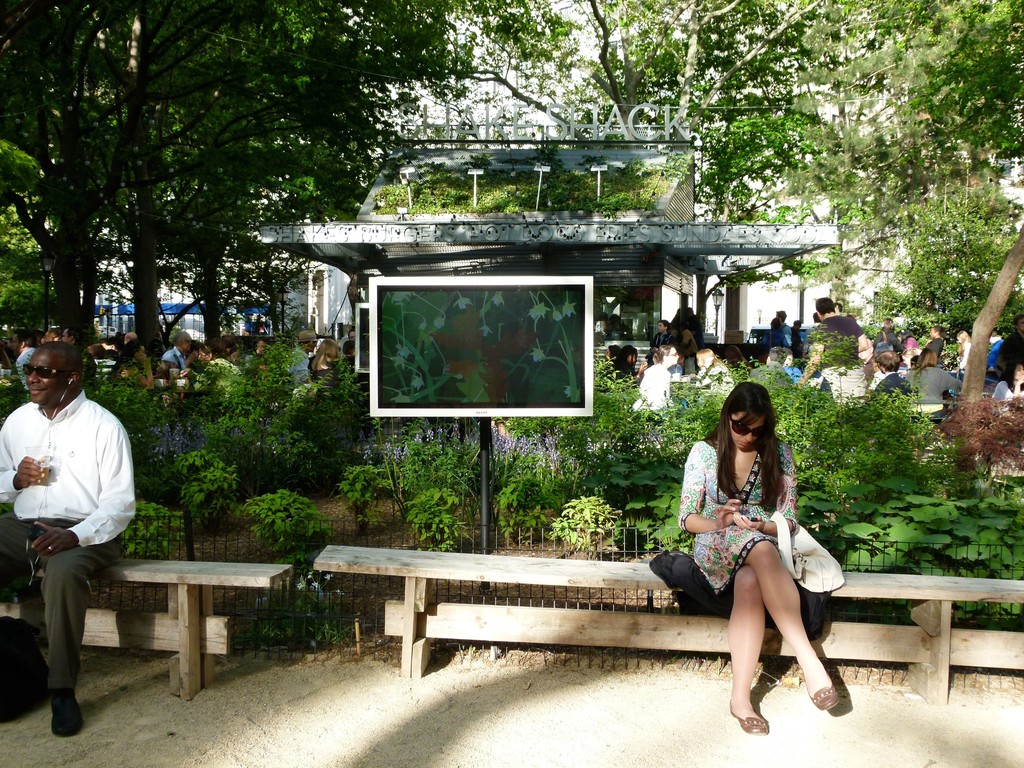 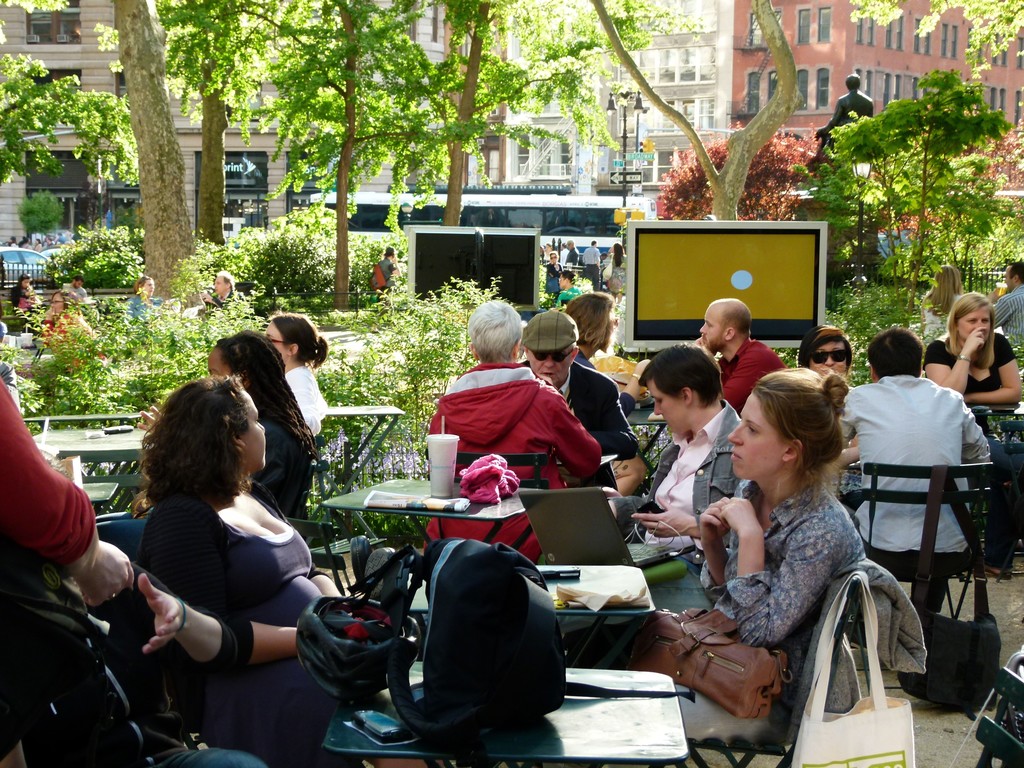 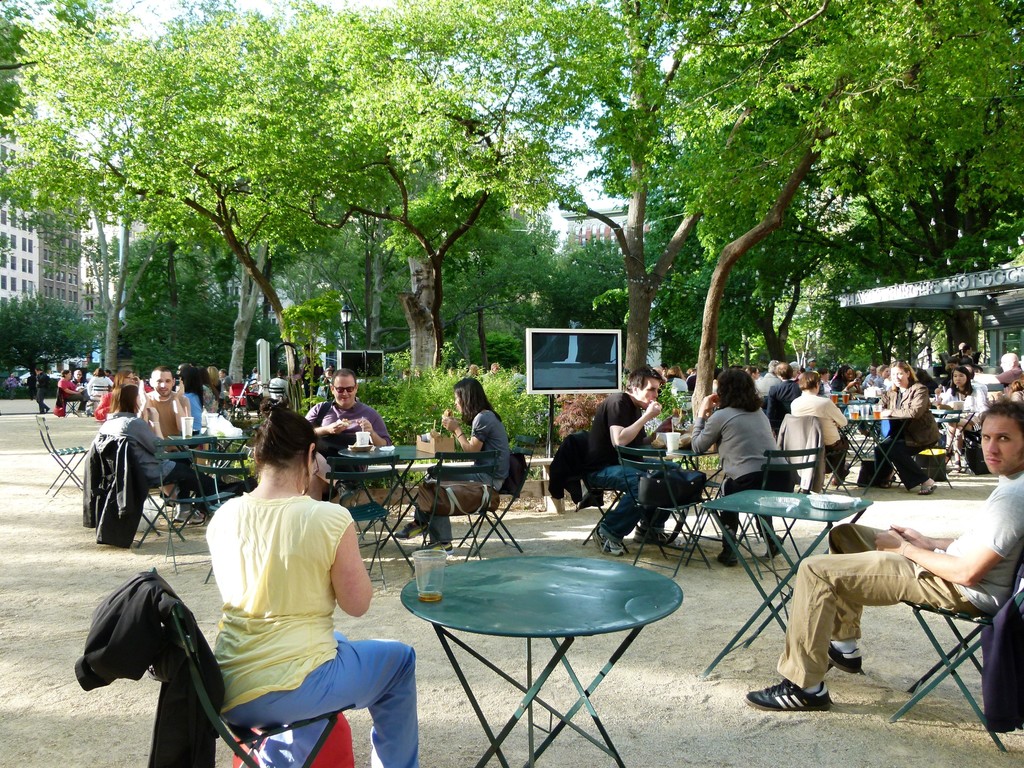 New York—Madison Square Park Conservancy’s Mad. Sq. Art announces the premiere of City of Nature, a new film by artist Kota Ezawa to be on view in Madison Square Park March 31 – May 5, 2011. Knitting together fleeting, split-second excerpts of popular films in which flora and fauna are the featured characters, the artist’s new animated video offers a six-minute cinematic comment on the juxtapositions between nature and culture in narrative mass media. Incorporating re-interpreted scenes from renowned films including Ang Lee’s iconic Brokeback Mountain to the Guy Ritchie directed, Madonna starring, Swept Away, the new Mad. Sq. Art commission will be screened continuously daily from 11am to 9pm.

The artist, Kota Ezawa, comments, “City of Nature is an alternative to the mainstream nature film in that it weaves together 70 nature scenes from 20 different pop culture films through animation. The nature scenes, stemming from films as diverse as Late Spring by Yasujirō Ozu and Rambo: First Blood, are stitched together into an abstract narrative where one natural element leads to the next. The entire film collage is hand redrawn and transformed into an animated film.

Surrounded by classic Manhattan buildings, Madison Square Park itself can be experienced as a piece of architecture, and as such, encourages us to view Manhattan as landscape. The fusion of nature and construction is a prevalent theme in City of Nature as throughout the city of Manhattan—natural film landscapes re-constructed over and over again through the process of animation, just as nature in real form is re-constructed time and time again as Manhattan continues to evolve. In this way, the film mirrors Madison Square Park, attempting to draw park-goers into a conversation about nature both within the film and throughout the park itself.”

President of the Madison Square Park Conservancy Debbie Landau notes, “We are delighted to present a new commission by such a talented artist whose films explore the relationships between art, culture, and the natural environment around us. With nature as its subject, City of Nature will offer an insightful and timely addition to the environs of Madison Square Park, which, in turn, will prove themselves an apt compliment to Ezawa’s work.”

Incorporating roughly 70 clips—many just seconds long—City of Nature presents what the artist refers to as a “video collage.” Scenes of streams and foliage are re-presented and further transformed by Ezawa’s hallmark style of freehand, computer assisted digital animation. The six-minute animated work draws from more than 20 popular films including, Brokeback Mountain, Days of Heaven, Deliverance, Der Berg Ruft, Fitzcarraldo, Late Spring, Lord of the Flies, Moby Dick, Swept Away, and Twin Peaks. The animated sequence of this time-based collage lends itself as a visually striking and original work containing subtle but deliberate echoes of iconic cultural moments embedded in our collective unconscious. In much the same way that Madison Square Park presents a cultivated and aestheticized side of nature, wildlife and green space amidst the urban landscape of central Manhattan, City of Nature examines the ways in which popular culture presents aestheticized images of the natural world, “unnatural” visions of nature that embed themselves in our cultural memory and media landscape more deeply than we may consciously know.

Kota Ezawa was born 1969 in Cologne, Germany and received his BFA from the San Francisco Art Institute before completing his MFA at Stanford University. Ezawa re-presents iconic moments from the media, popular culture, and the history of photography in animated videos, slide projections, light-boxes, and prints. Ezawa meticulously recreates animated sequences using basic digital drawing and animation software. His source material has included the Zapruder 8mm film of the Kennedy assassination, the O.J. Simpson trial, and clips from the films Who’s Afraid of Virginia Wolf? and D.W. Griffith’s Birth of a Nation.

He received a Louis Comfort Tiffany Foundation Award in 2003, a SECA Art Award from the San Francisco Museum of Modern Art in 2006 and a Eureka Fellowship in 2010.