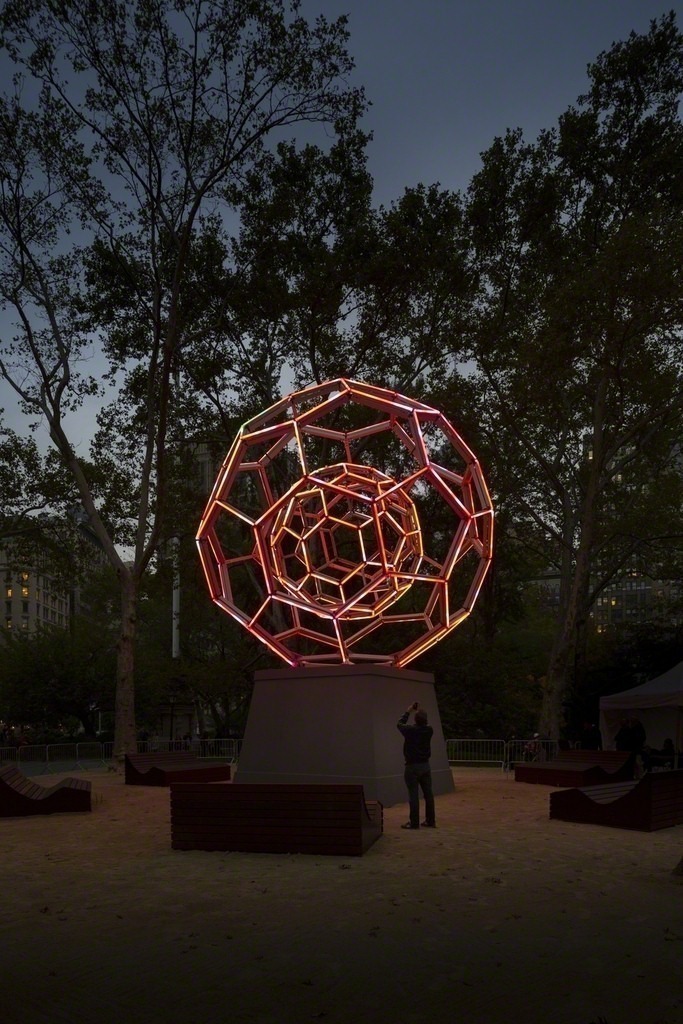 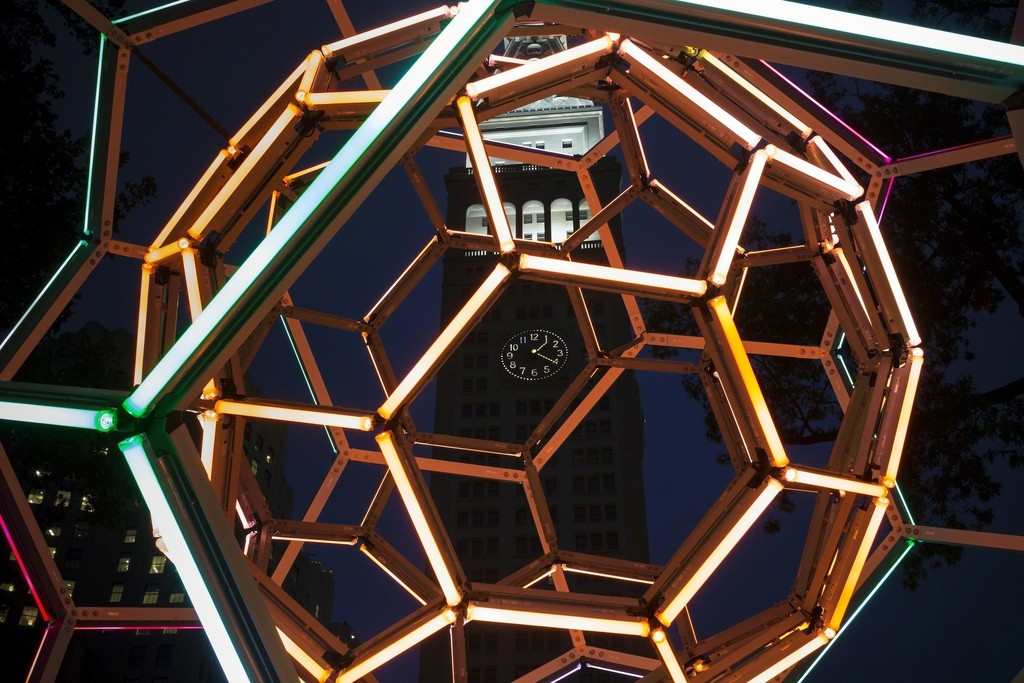 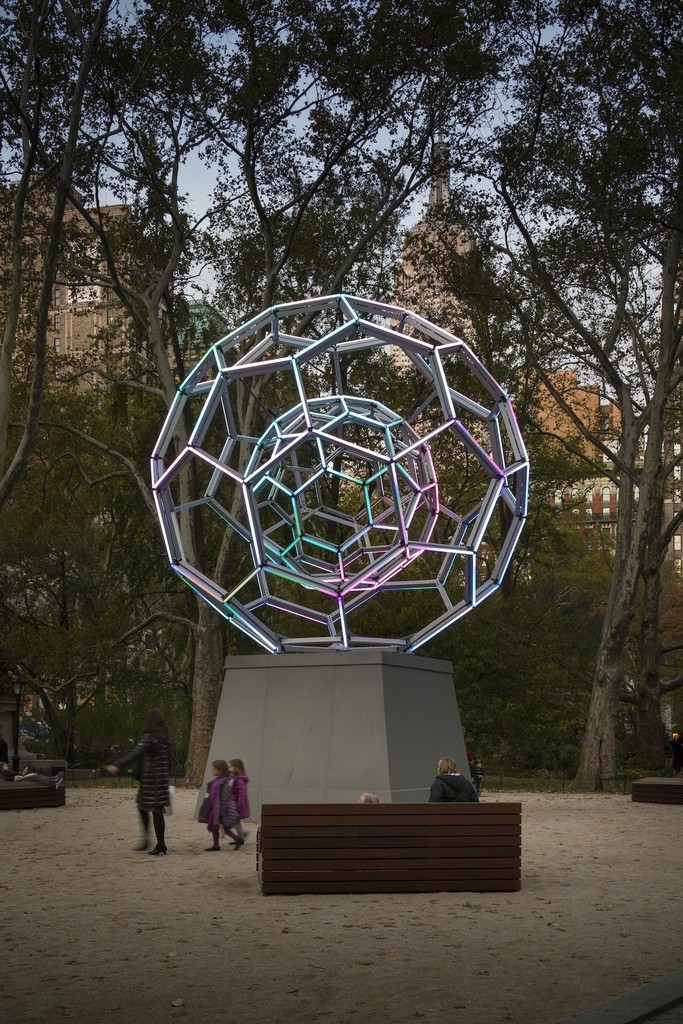 Madison Square Park Conservancy’s Mad. Sq. Art is thrilled to announce a monumental sculpture by distinguished artist Leo Villareal. Largely inspired by the work of Buckminster Fuller, Villareal’s BUCKYBALL will apply concepts of geometry and mathematical relationships within a towering 30-foot tall, illuminated sculpture. The site-specific work will remain on view daily from October 25, 2012 through February 15, 2013 in Madison Square Park.

A commission of the Mad. Sq. Art program, Villareal’s BUCKYBALL will feature two nested, geodesic sculptural spheres comprised of 180 LED tubes arranged in a series of pentagons and hexagons, known as a “Fullerene,” referring to the form’s discovery by Buckminster Fuller. Individual pixels located every 1.2 inches along the tubes are each capable of displaying 16 million distinct colors and will be specifically tuned by the artist’s own software, creating a subtle and sophisticated palette to enliven the Park. Relying on LED technologies driven by chance, BUCKYBALL‘s light sequences will create exuberant, random compositions of varied speed, color, opacity, and scale. BUCKYBALL will trigger neurological processes within the brain, calling on our natural impulse to identify patterns and gather meaning from our external environment.

Through basic elements such as pixels and binary codes, Villareal allows for a better understanding of the underlying structures and systems that govern everyday function. As he builds these simple elements into a full-scale sculptural installation that moves, changes, and interacts, this work ultimately grows into a complex, dynamic form that questions common notions of space, time, and sensorial pleasure.

Villareal’s light sculpture will be surrounded by zero-gravity couches that allow viewers to recline below the artwork. These couches are built out of wooden slats that mimic the construction method of adjacent park benches just as the pedestal on which BUCKYBALL rests emulates support structures found on the Park’s neighboring sculptural monuments.

Artist Leo Villareal states, “I am thrilled to be presenting BUCKYBALL in Madison Square Park. My new light sculpture takes the form of a Carbon 60 molecule and expands it to monumental scale. It also explores self-similarity through the use of two identical nested spheres, the outer at 20 feet in diameter and the inner at 10 feet. Lined with LED tubes, these structures are activated through sequenced light driven by custom software. This public artwork reinterprets many of the traditional elements found in the Park such as seating and historic monuments in a fresh and exciting way.”

Madison Square Park Conservancy President Debbie Landau comments, “Leo’s BUCKYBALL is apt for Madison Square Park’s unique landscape. It shares much in common with the shifting colors and light of the fall season. It will animate the park throughout the fall and winter with its ever-shifting light.”
About the Artist:
Leo Villareal received a BA in sculpture from Yale University in 1990, and a graduate degree from NYU Tisch School of the Arts, Interactive Telecommunications Program.

Among the projects Villareal is currently working on, Bay Lights for the Bay Bridge in San Francisco will spectacularly light the bridge and glisten throughout the city. Villareal is also a focal point of the James Corner Field Operations design team that will renew Chicago’s Navy Pier. He has also been commissioned for installations at Cornell University, Ithaca, New York, and The Durst Organization in New York City. Villareal’s work is in the permanent collections of prestigious museums including the Albright-Knox Art Gallery, Buffalo, NY; The Museum of Modern Art, New York, NY; Naoshima Contemporary Art Museum, Kagawa, Japan; Nerman Museum of Contemporary Art, Overland Park, KS; and the National Gallery of Art, Washington, D.C.
Leo Villareal is represented by Gering & Lopez Gallery, New York.