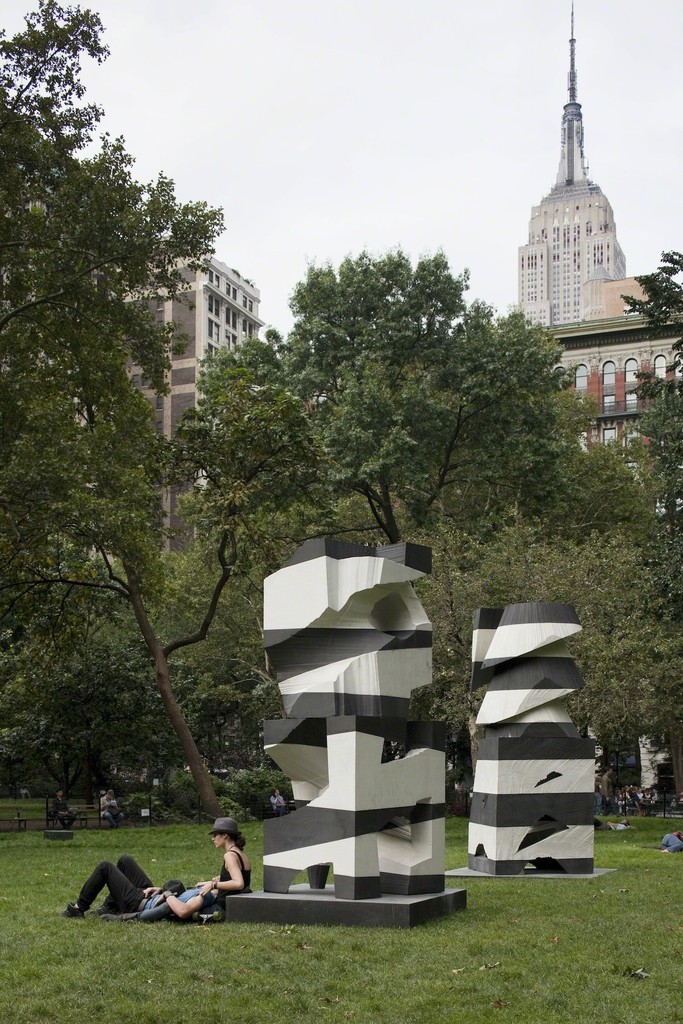 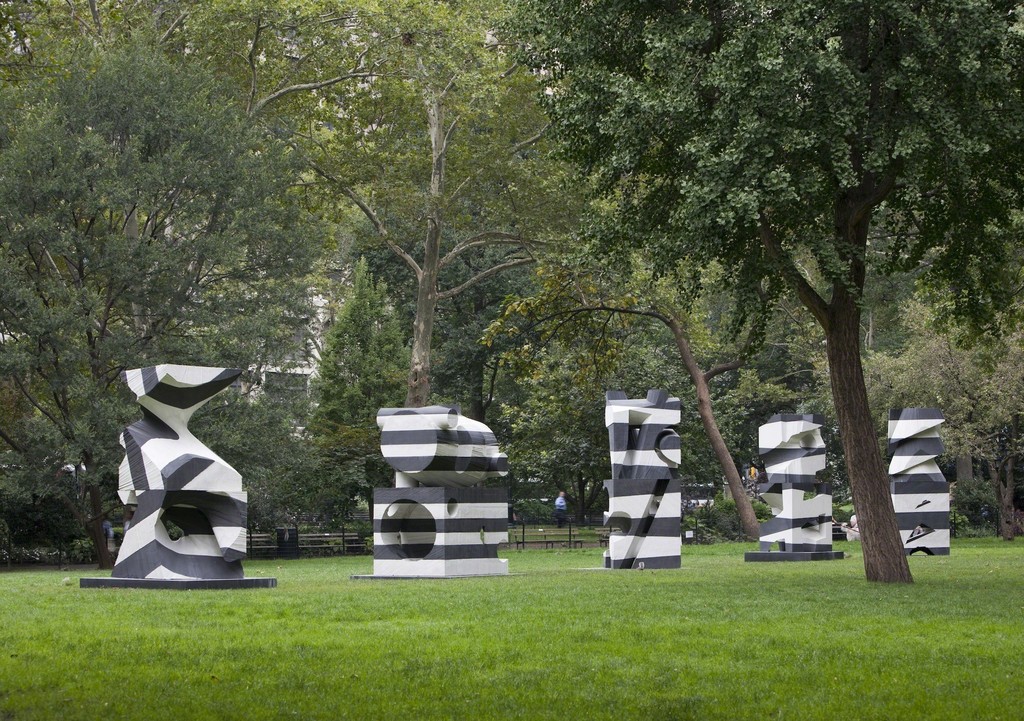 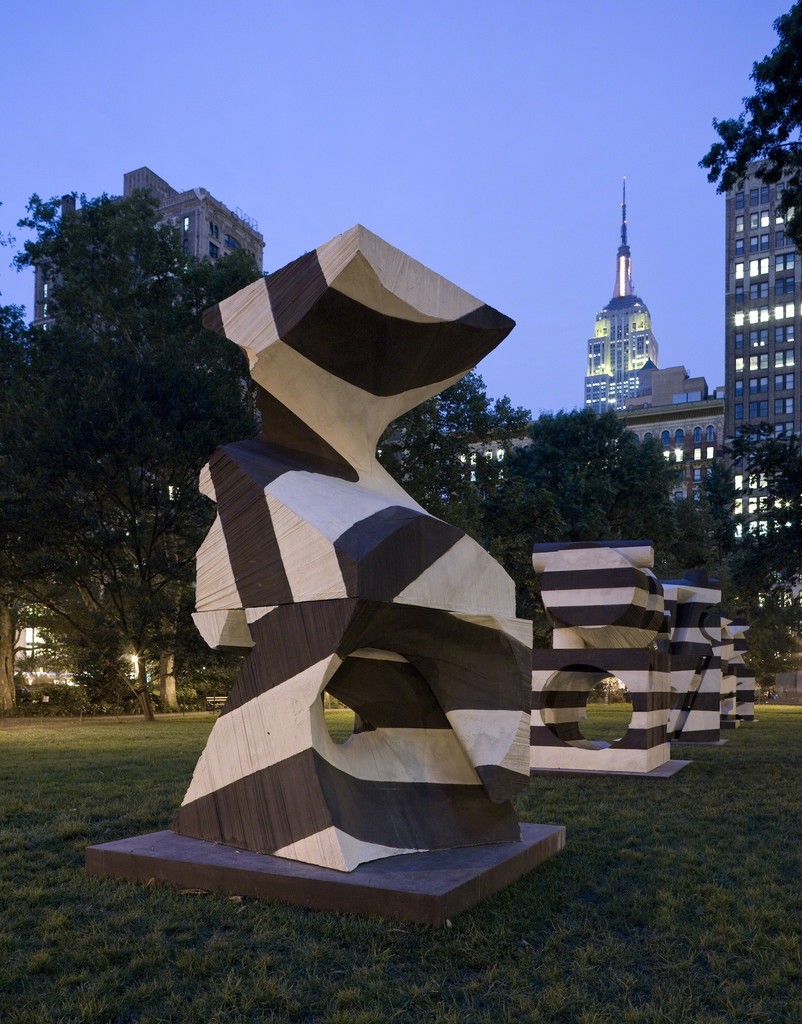 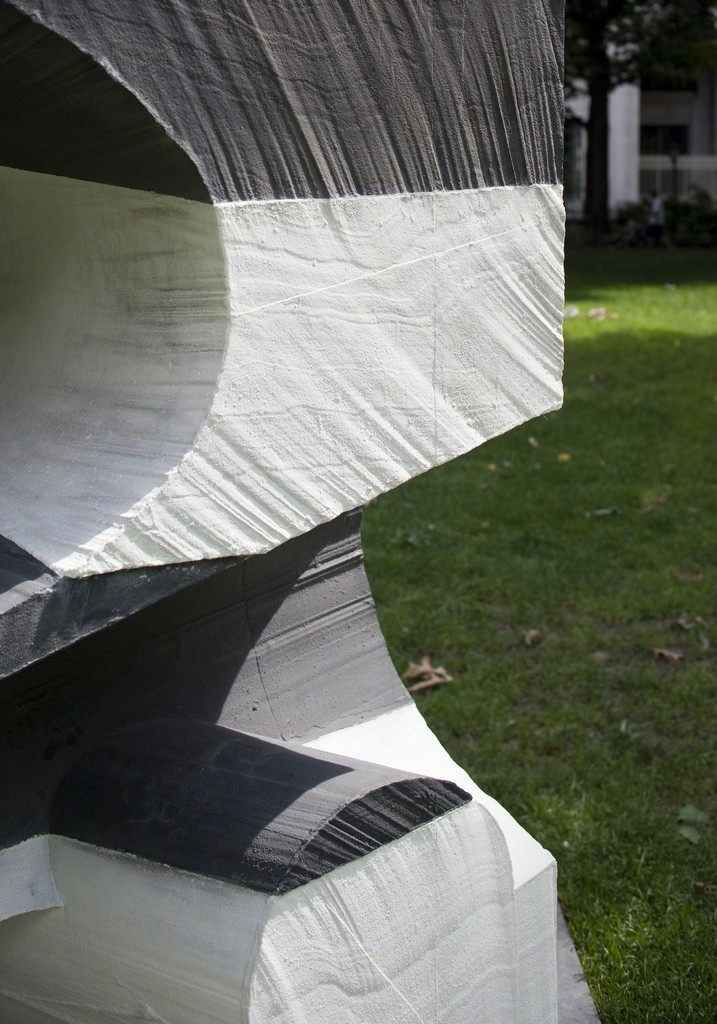 New York, NY, August 12, 2009––The Madison Park Conservancy’s Madison Sq. Art program is pleased to present Markers, a group of five new cast concrete sculptures by Mel Kendrick. They will be installed on the central axis of the central Oval Lawn of historic Madison Square Park.

MARKERS
The five new pieces that make up the Markers installation in Madison Square Park are at once radically new and quintessentially Kendrick; on the one hand a bold departure from the artist’s characteristic use of wood as his primary medium, on the other hand a natural evolution of the formal motifs and self-evident process that have become synonymous with his work.

Since the mid-1970s, Kendrick has developed a reputation for sculptures born of the play between addition and subtraction, destruction and creation. In Kendrick’s hands, blocks of raw wood are sliced and gutted, their interiors ingeniously reconfigured and reconstituted atop the remnant shell of the wood block from which they originated.

In Markers, Kendrick applies the same aesthetic and procedural methods to cast concrete. The black and white concrete is poured in layers, a new process and new material for the artist. For Kendrick, ever the process-oriented sculptor, these striations and the rippling surfaces for contain the fossil memory of the actions taken over time. The sources for the Markers works vary widely, from the black and white marble found in Gothic Italian Cathedrals such as Siena, to the simplest methods of marking: placing one object on top of another. Their location in Madison Square Park also references the numerous monuments installed throughout New York City park system.

Mel Kendrick was born in Boston, MA and lives and works in New York City. He received a B.A. from Trinity College in Hartford, CT and a M.A. from Hunter College in New York. For more than three decades Kendrick has been producing a body of work that reveals an obsessive appreciation for the intricacies of his material and highlights an engaged and laborious creative process. The works that result constitute a philosophical, rather than formal abstraction; deftly deploying a variety of techniques, forms and color treatments to address themes of wounding and repair, interiority and externality, positive and negative volume.

Kendrick has exhibited extensively and to great acclaim since the mid-1970s at institutions including the Metropolitan Museum of Art, New York; the Museum of Modern Art, New York; the Whitney Museum of American Art, New York and the Brooklyn Museum, New York. His work is included in many significant public collections, including those of the Art Institute of Chicago; the Brooklyn Museum; the Metropolitan Museum of Art; the Museum of Modern Art; the National Gallery of Art, Washington, D.C.; the Walker Art Center, Minneapolis; and the Whitney Museum of American Art. He has been the recipient of numerous awards, most recently the Francis J. Greenburger Award and the Academy Award for Art from the American Academy of Arts and Letters. He is represented by David Nolan Gallery.

MAD. SQ. ART
Mad. Sq. Art is the free gallery without walls presented by the Madison Square Park Conservancy in the historic 6.2-acre park located at 5th Avenue and 23rd Street. In 2009, Mad. Sq. Art has also exhibited The Park, a site-specific series of short films by Shannon Plumb, and Flooded Chambers Maid, a mixed media installation by Jessica Stockholder.

Major Support for Mad. Sq. Art is provided by Founding Partners Agnes Gund and Anonymous. Substantial support is provided by Ronald A. Pizzuti, Toby Devan Lewis and the Henry Luce Foundation. Support for Markers is generously provided by David Nolan Gallery, Gail Monaghan, Francis Williams, Raymond Learsy, Wynn Kramarsky and Ted Poretz. This project is supported in part with public funds from the New York City Department of Cultural Affairs. Mad. Sq. Art is made possible by the leadership and generosity of the many friends of the Madison Square Park Conservancy.