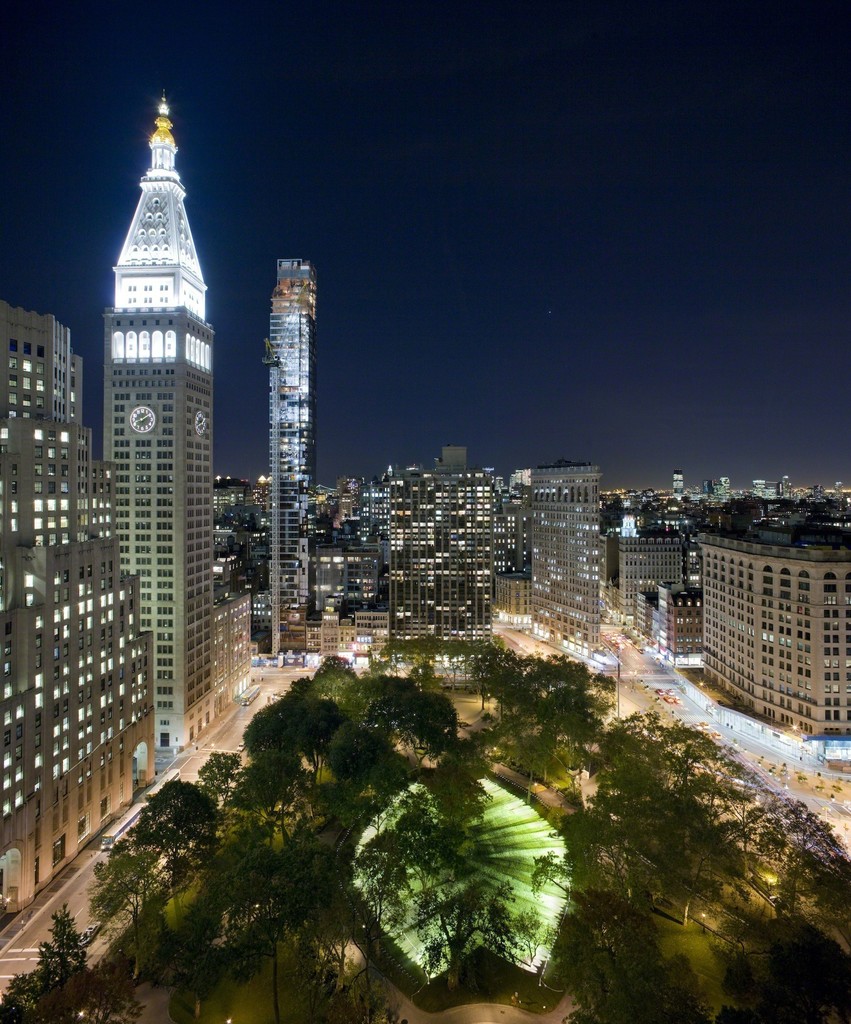 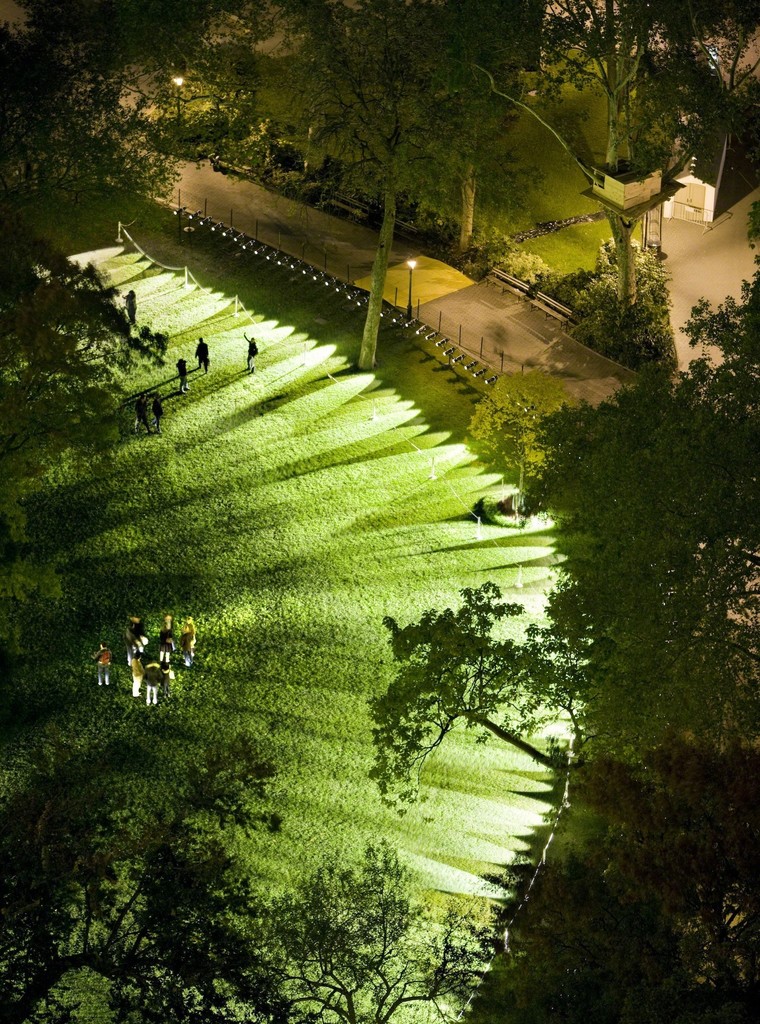 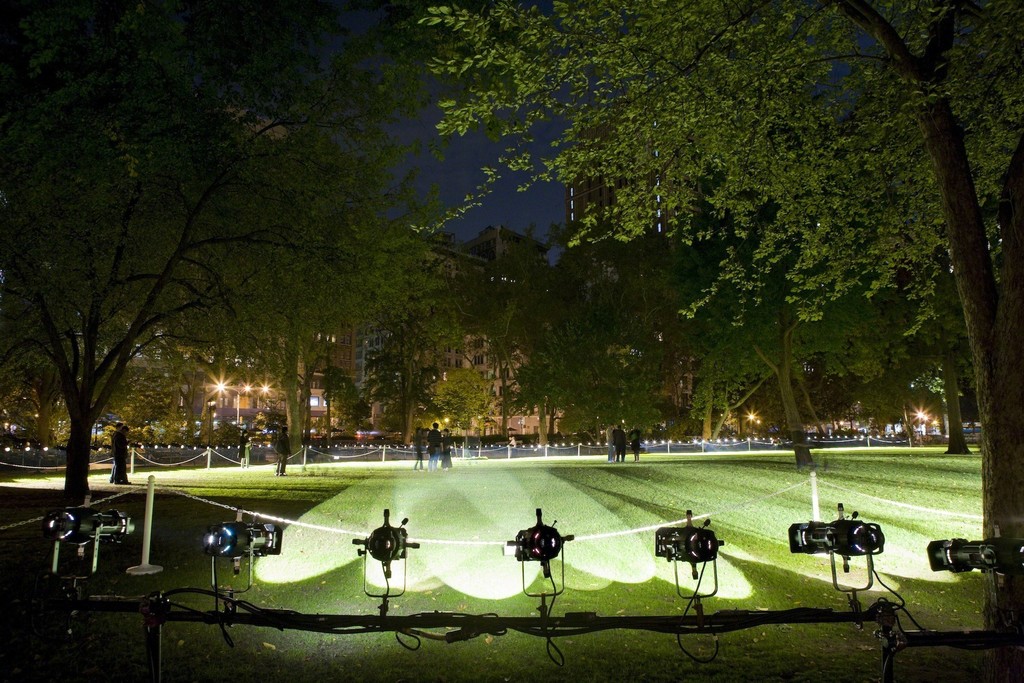 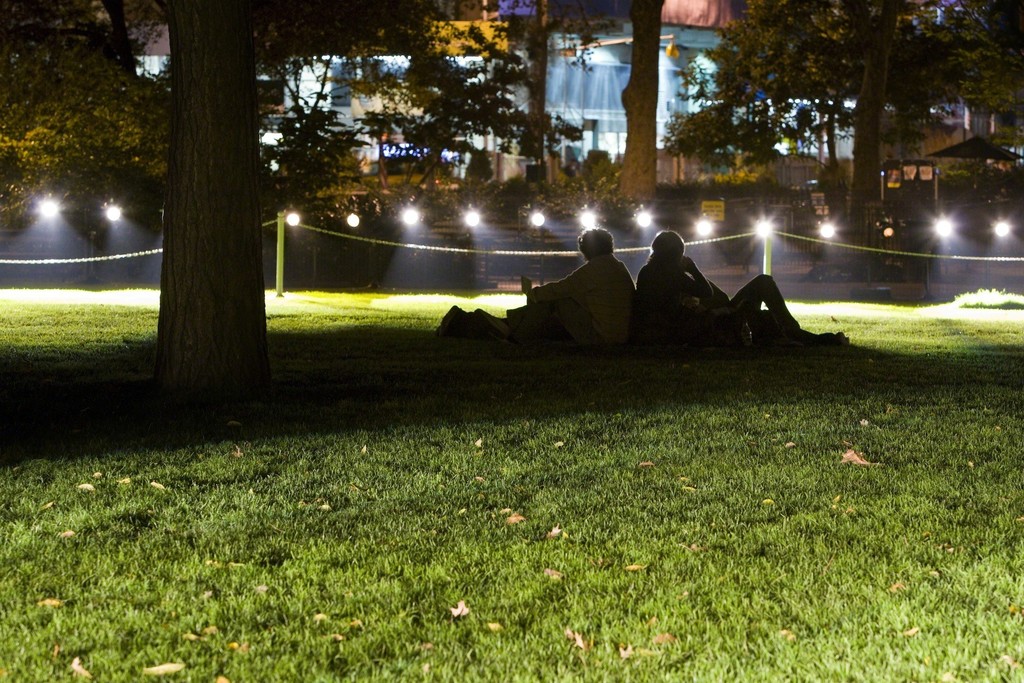 For four weeks in Fall 2008, Mad. Sq. Art, the Madison Square Park Conservancy’s free outdoor gallery in Madison Square Park, will present Pulse Park, the U.S. debut of site-specific interactive light sculpture by internationally known electronic artist Rafael Lozano-Hemmer. This spectacular night-time installation introduces New York to the technological and artistic mastery of an artist whose large scale outdoor work has been on view in major cities worldwide. Pulse Park is the culmination of an interactive heartbeat series developed by the artist in recent years in Mexico City, Venice and Toronto.

A matrix of light grazes the central Oval Lawn of Madison Square Park—the intensity entirely modulated by two sensors that measure the heart rate of passers-by. Two hundred narrow-beam theatrical spotlights placed uniformly on the lawn perimeter are pointed to the center of the oval. The lights are mounted parallel to the ground, at ground level, providing subtle and pulsing illumination of the grass.

Two metal sculptures with embedded sensors and computers are placed at both ends of the Oval Lawn to detect the pulse of people who hold them. The systolic and diastolic readings are immediately converted into light pulses by a computer so the heart beat of the most recent participant is seen on the beam closest to the sensor while older recordings are sequentially passed onto further lights. The resulting effect is a visual representation in an urban landscape of the vital sign that is our most emblematic biometric. When no one is participating, the matrix shows the heart rate recordings for the last 200 people who held the interfaces.

Each light will project 250W of power, a subtle effect for an urban scale, although together the piece will be highly visible from the surrounding areas in the park. The piece will be live in the early evening and is designed to attract constant, personal participation in an ever evolving parade of light rhythms generated by park visitors.

Each pulse-catching sculpture has an embedded dual core micro-computer, a USB-DMX interface, a vernier digitizer with a wireless probe and a pair of heartbeat sensors. The sensors not only detect the rate of the pulse but also characteristics such as the amplitude of the wave form and the shape of the curve. Every pulse detected is immediately converted to a pulsing pattern on the light closest to the sensor. When a subsequent pulse is detected the previous recordings shift down the line by one position. At any time, people will always see the 200 most recent recordings. Even after the computers are powered down, they remember the last readings.

Rafael Lozano-Hemmer and the Pulse Series

This project is derived from Lozano-Hemmer’s interest in biometrics as an input for non-linear dynamic artworks. The installation Pulse Room at the 2007 Venice Biennale was the first of the series of works in which heart readings control an interactive environment. In Pulse Room, one hundred incandescent light bulbs blinked to the pulses of members of the public, creating a mesmerizing interior environment. A video of this project can be seen at http://www.lozano-hemmer.com/pulseroom.mov

Pulse Front, a second project in the heartbeat series was shown at Toronto’s Harbourfront in June 2007. The project simultaneously beamed the heartbeats of 10 participants to the sky using 20 powerful searchlights whose beams could be seen within a 10 mile radius. The Festival recorded over one million visitors to the site. The project also generated substantial media attention. A video of this project can be seen at http://www.lozano-hemmer.com/video/pulsefront.mov

Hundreds of impressive photos were posted by the public in sites such as http://www.flickr.com/search/?q=pulse+front

Mexican-Canadian electronic artist Rafael Lozano-Hemmer develops large-scale interactive installations that are at the intersection of architecture and performance art. His main interest is in creating platforms for public participation, by perverting technologies such as robotics, computerized surveillance or telematic networks. His work has been commissioned for events such as the Millennium Celebrations in Mexico City (1999), the Cultural Capital of Europe in Rotterdam (2001), the United Nations’ World Summit of Cities in Lyon (2003), the opening of the Yamaguchi Centre for Art and Media in Japan (2003) and the Expansion of the European Union in Dublin (2004).

His work in kinetic sculpture, responsive environments, video installation and photography has been shown in museums in four dozen countries and Biennials in Sydney (Australia), Liverpool (UK), Shanghai (China), Istanbul (Turkey) and Havana (Cuba). His work is in important private and public contemporary art collections such as the Daros-Latinamerica Collection in Zürich, the Jumex Collection in Mexico, the Speyer collection in New York, the Cisneros Fontanals Foundation in Miami, Tate in London and the Museum of Modern Art in New York.

At the Prix Ars Electronica in Austria, his pieces have received a Golden Nica, a distinction and two honorable mentions. He also won two BAFTA British Academy Awards for Interactive Art in London, a distinction at the SFMOMA Webby Awards in San Francisco, “Artist of the Year” at Wired Magazine’s Rave Awards, a Rockefeller Fellowship, a Langlois Grant, the Trophée des Lumières in Lyon and an International Bauhaus Award in Dessau, Germany, among others.

Lozano-Hemmer is currently representing Mexico at the Venice Biennale