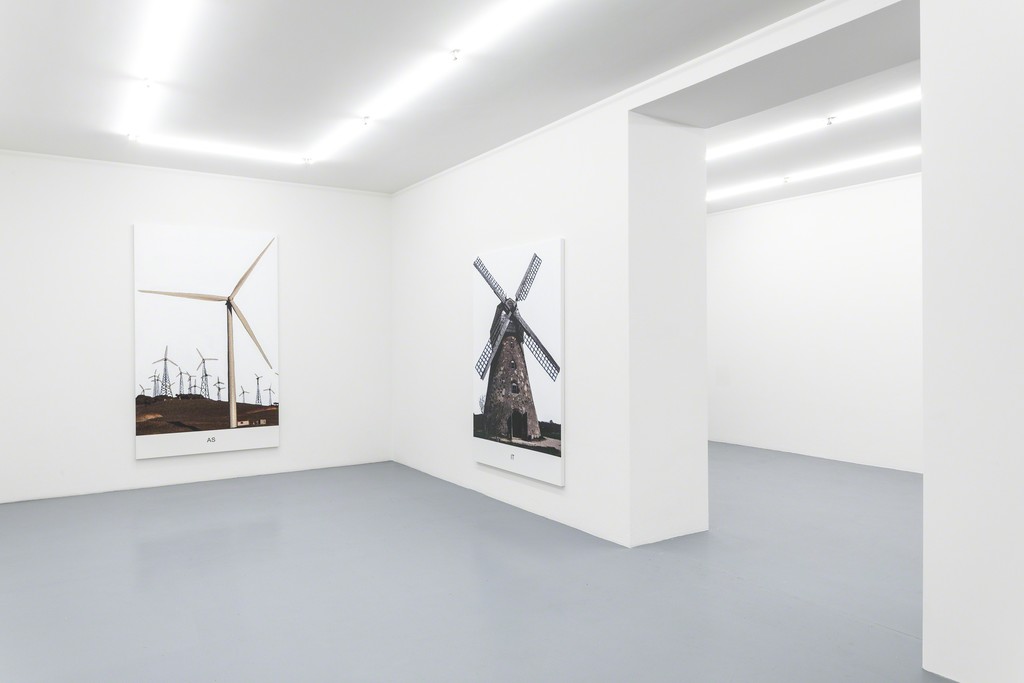 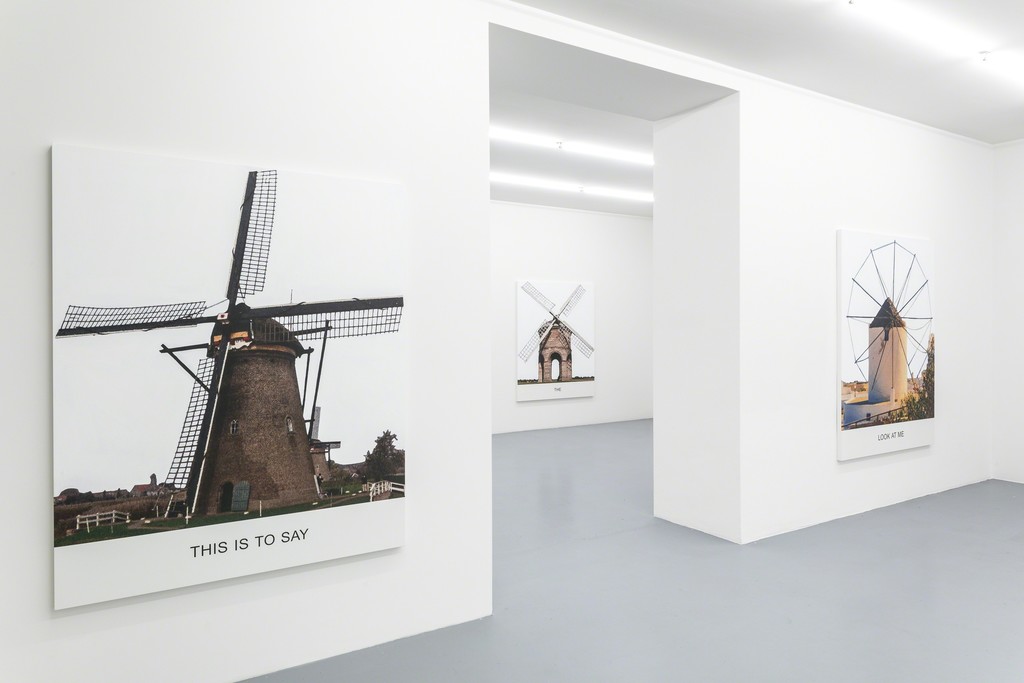 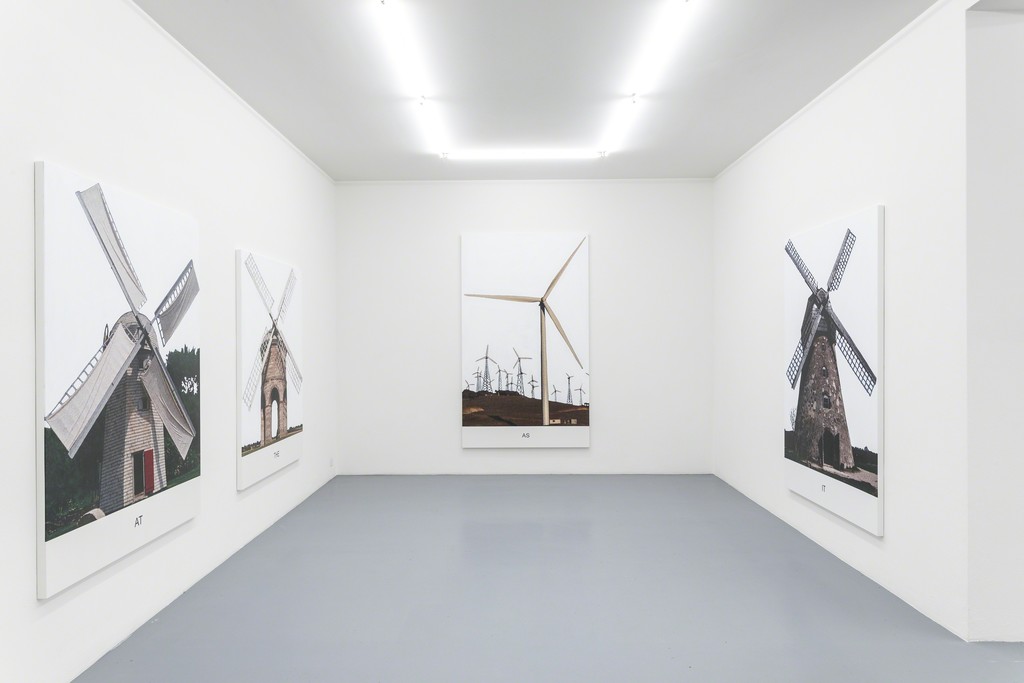 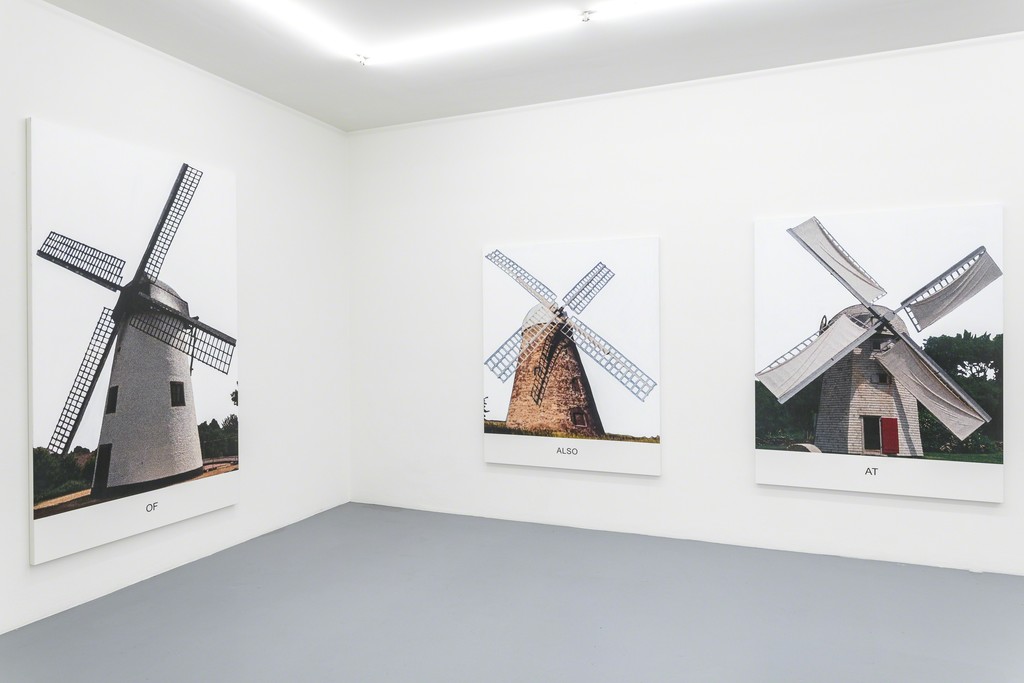 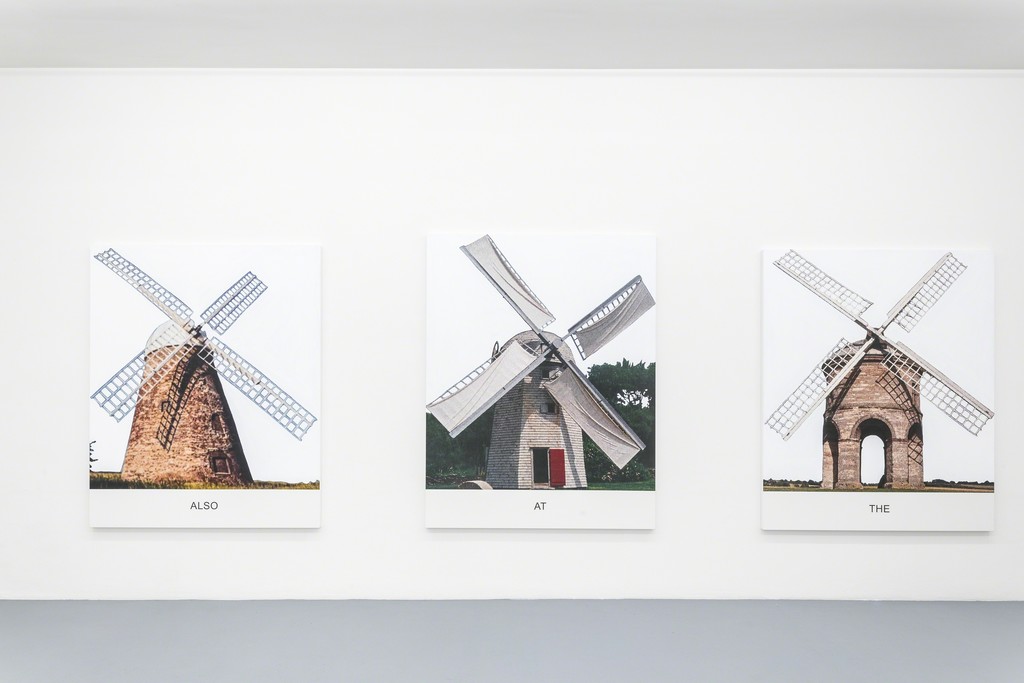 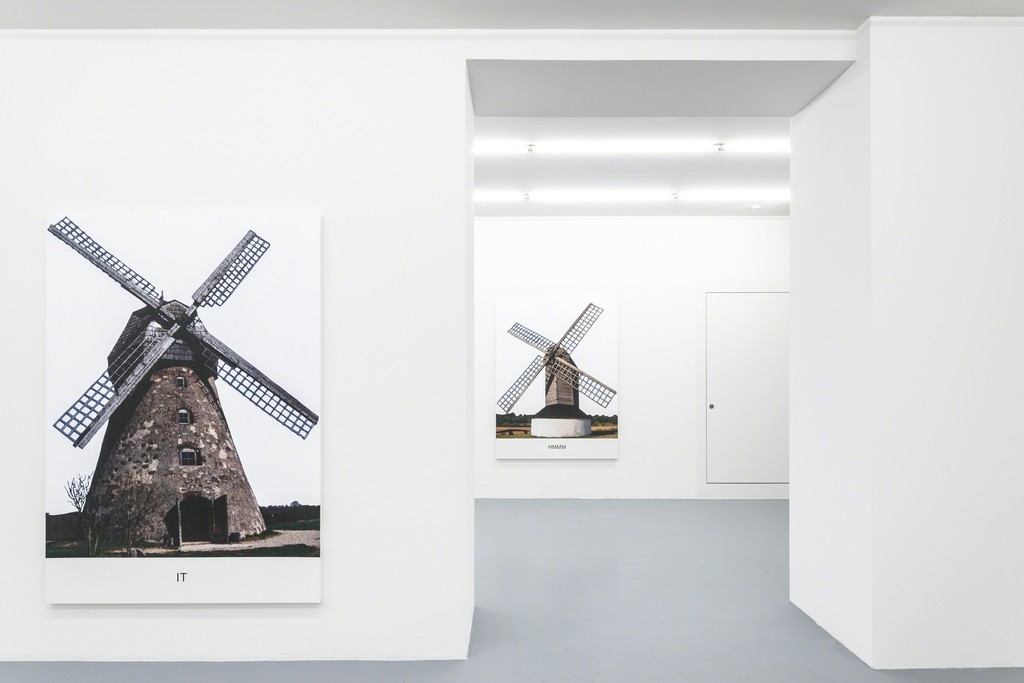 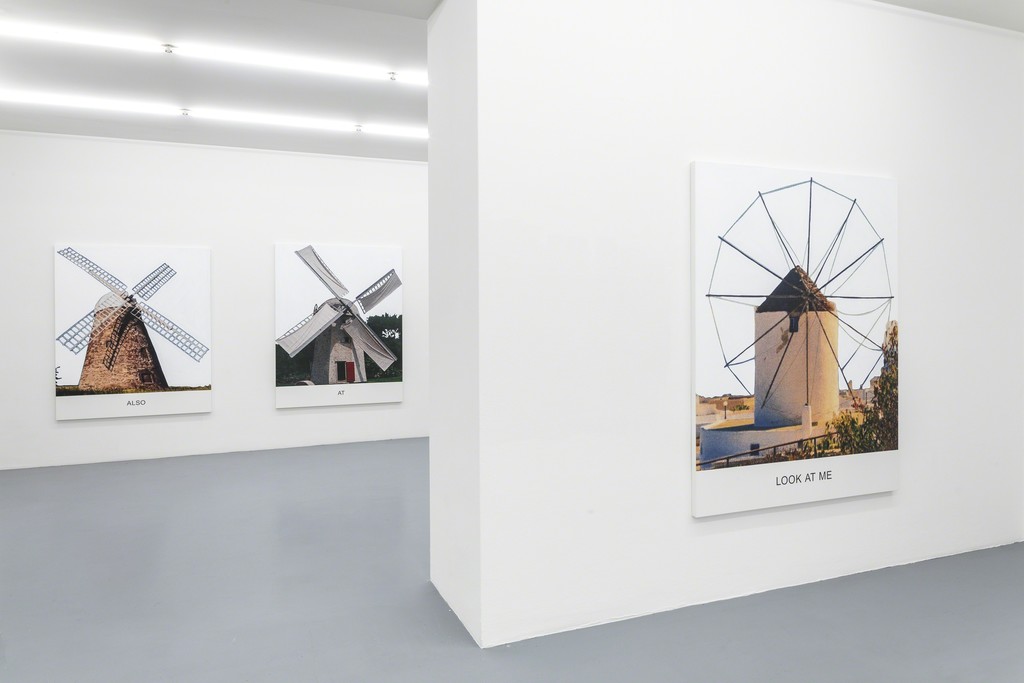 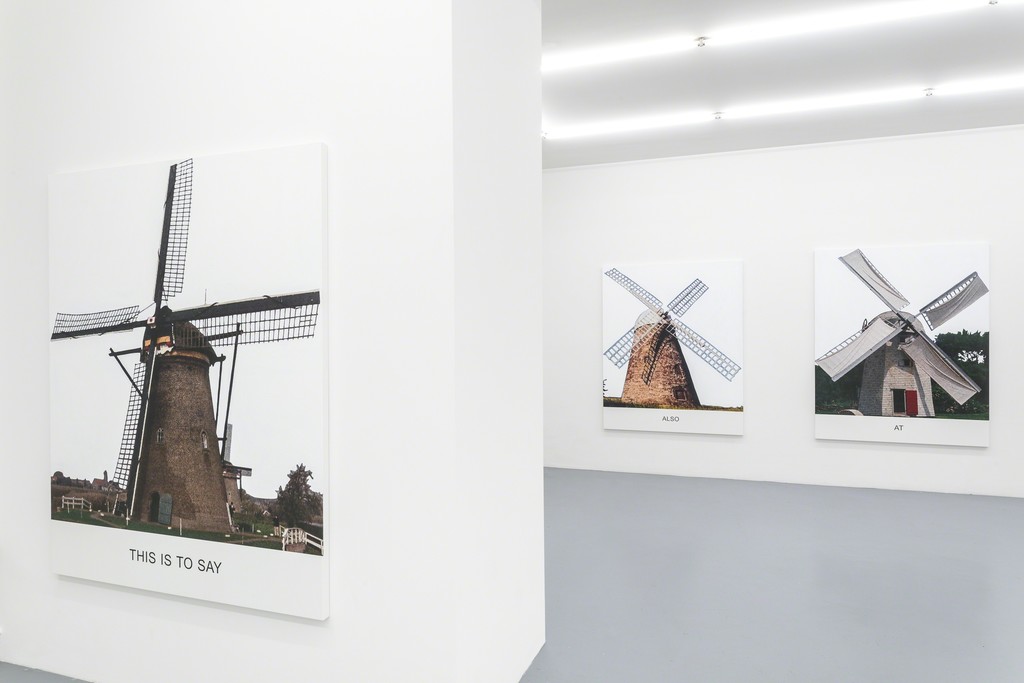 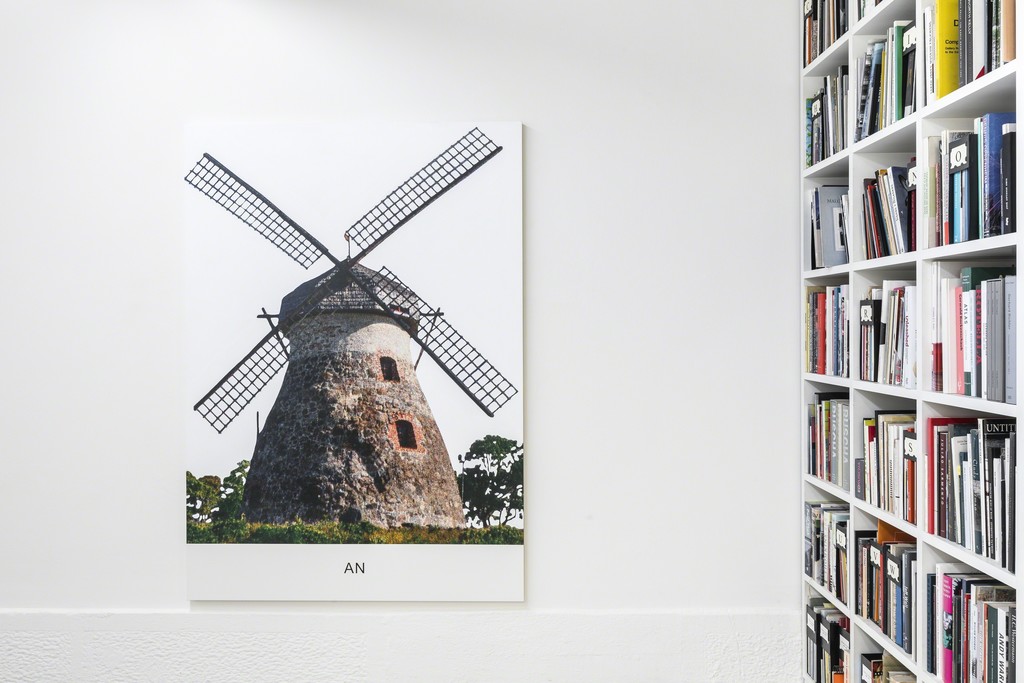 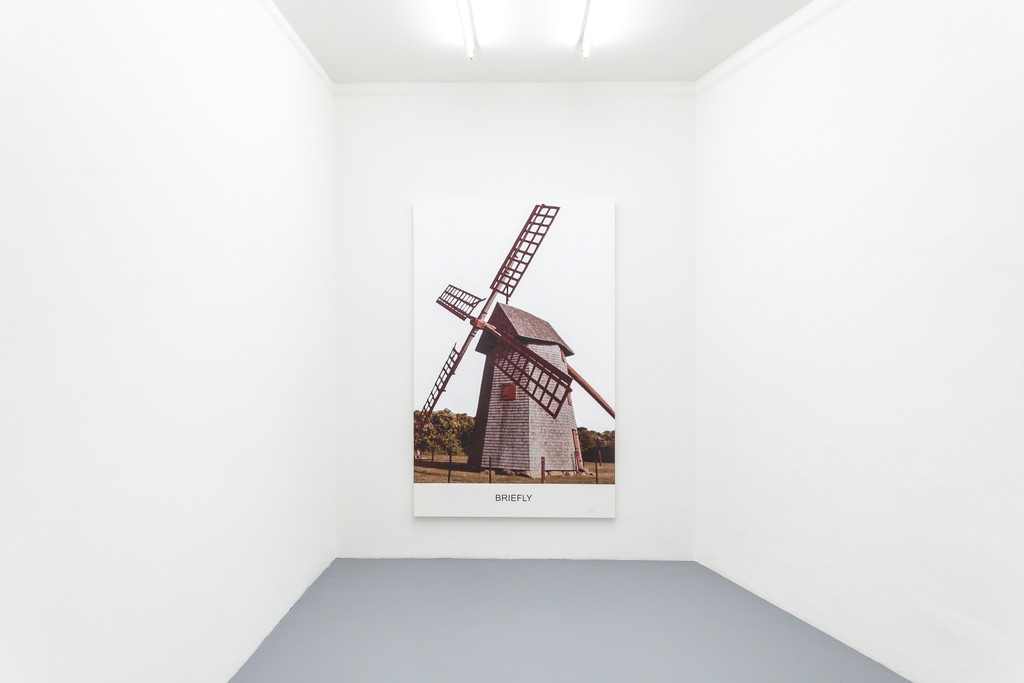 The exhibition at Mai 36 Galerie presents a new group of works by American artist John Baldessari, who has been represented by the gallery since 1991. The new group of works reprises combinations of text and image, and melds the motif of various windmills and a wind farm with a textual field in contrasting color, referring on Miguel de Cervantes’ novel Don Quijote.
Baldessari, who will celebrate his 87th birthday in June, explores the relationship between image and language by deploying writing as a means of (visual) expression. This approach brings together two kinds of communication within a single work and addresses the complex relationship between two fundamentally different forms of human articulation.
While teaching at the California Institute of the Arts, Baldessari influenced generations of artists. In the early 1970s, he founded and led the Post Studio seminar, with his now legendary Post Studio Art Class going on to foster such famous names as David Salle, James Welling, Matt Mullican, Troy Brauntuch and many more besides.
The visual motifs in his latest series of works are interspersed with captions in the form of brief phrases or even just a single pronoun, article or suchlike, reiterated in the respective title. The individual words and phrases were selected by pure chance, simply by sticking a pin into a copy of Miguel de Cervantes’ Don Quixote. The works And (2017) and As (2017) show a windmill or windfarm, and are titled with curt conjunctions, whereas the works This Is To Say (2017) and Look At Me (2017) are captioned with fuller phrasing. Although seemingly random, the titles themselves express a divergence in the interaction between text and image, which dissolves once the connection between image and word, and between word and novel, is determined.
In general, a text explains an image and an image illustrates a text. But because the captions here are not obviously related to the images, John Baldessari undermines the fundamental concept behind our conventional reading habits. Baffling, as some of the conflicting juxtapositions might seem, the associations they trigger open up a broad spectrum of possible interpretations and surprising new perceptions. Ultimately, what lies behind this seemingly arbitrary approach is the artistic intention of prompting the viewer to pursue new avenues of thinking that can stimulate reflection and innovative thought processes.
American artist John Baldessari (born 1931 in National City, California) has, since the 1960s, been regarded as one of the most outstanding and versatile proponents of conceptual art. His forms of expression include painting, drawing, photography and video. His works have been shown in some of the world’s leading museums and galleries, most recently in a 2018 solo exhibition at Museo Jumex in Mexico City.