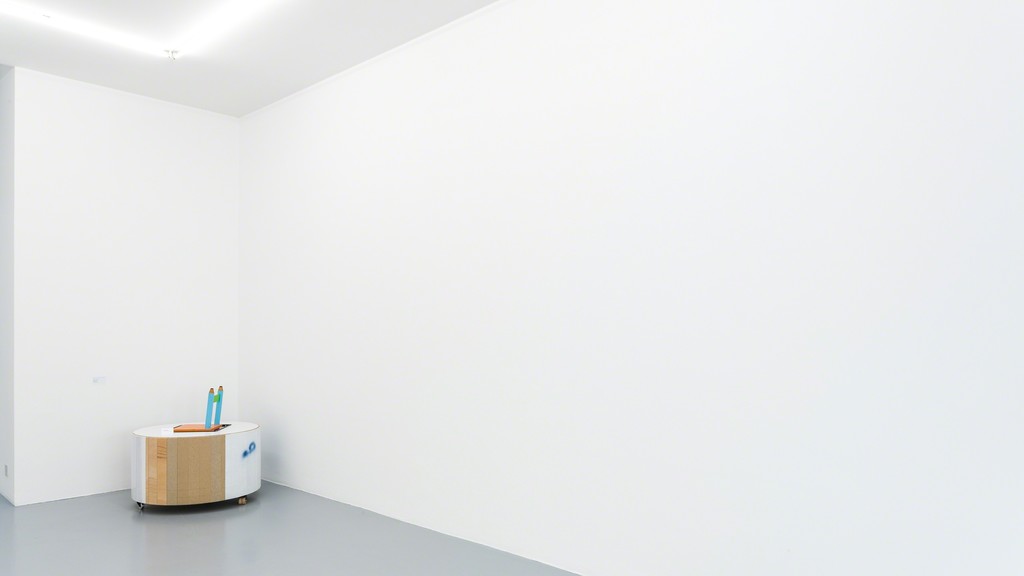 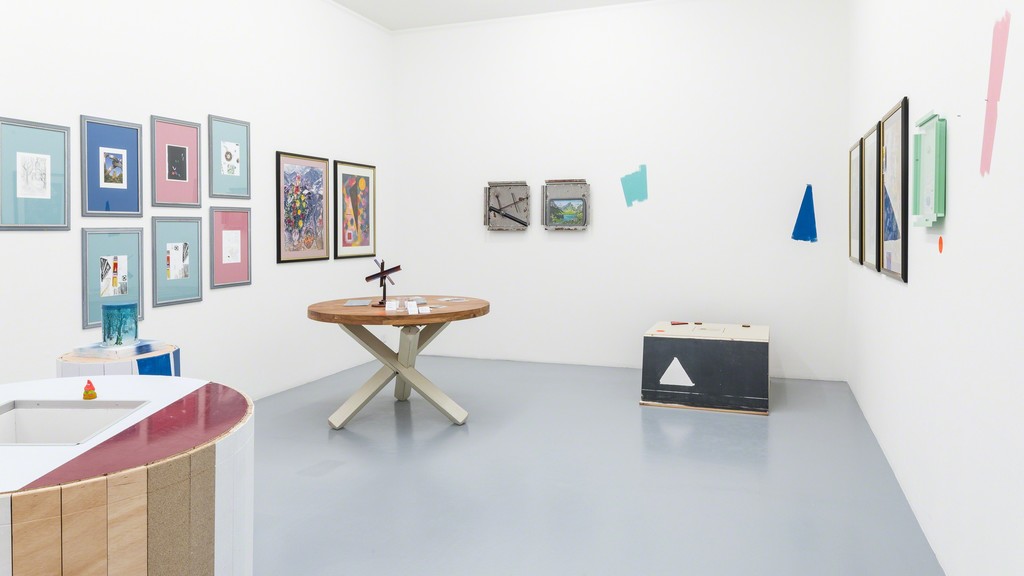 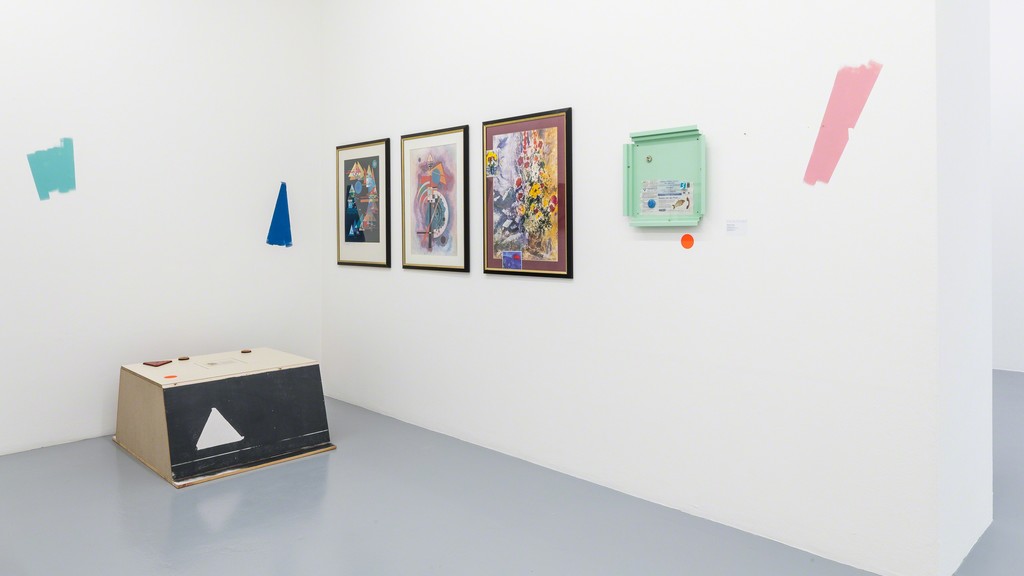 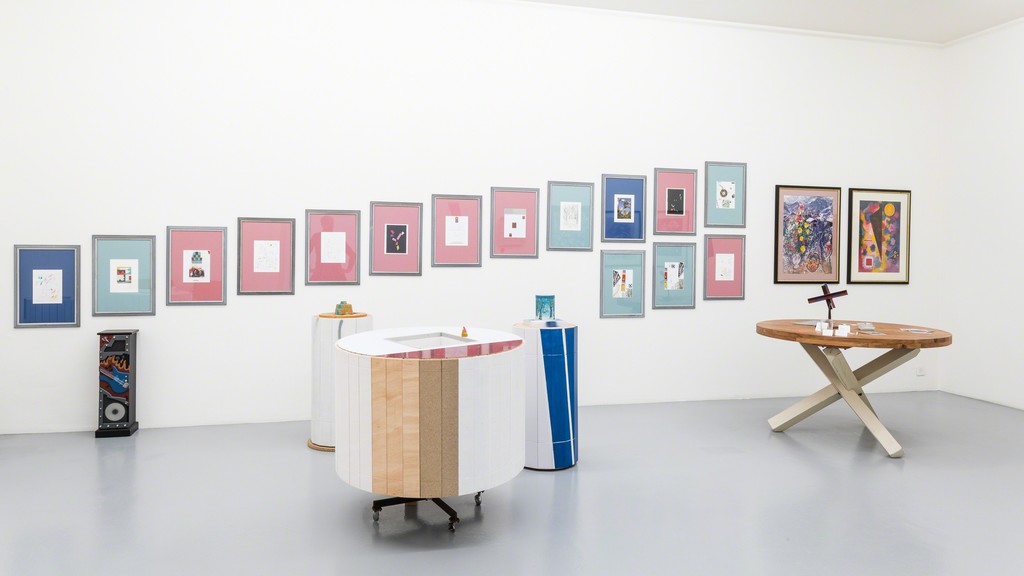 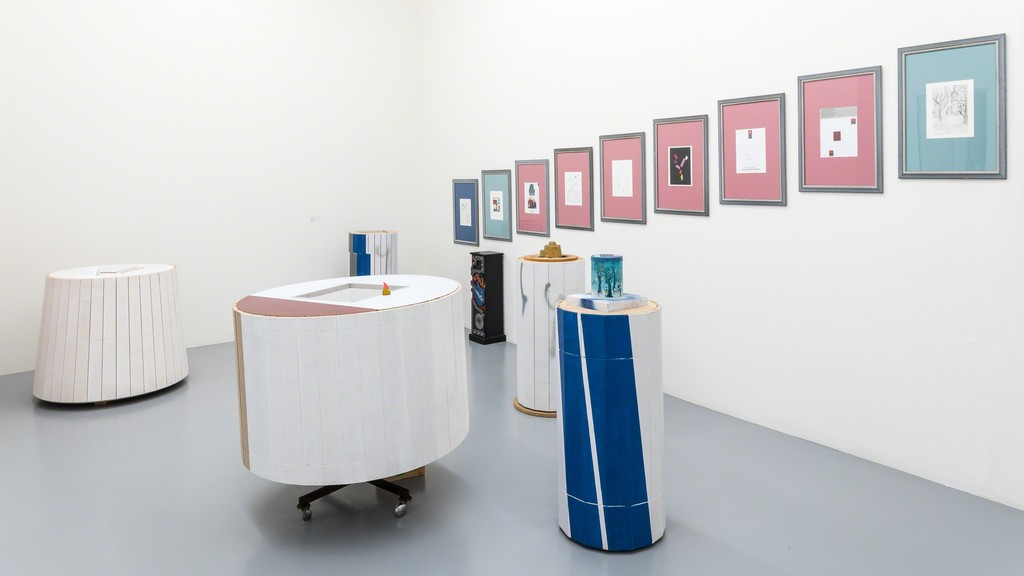 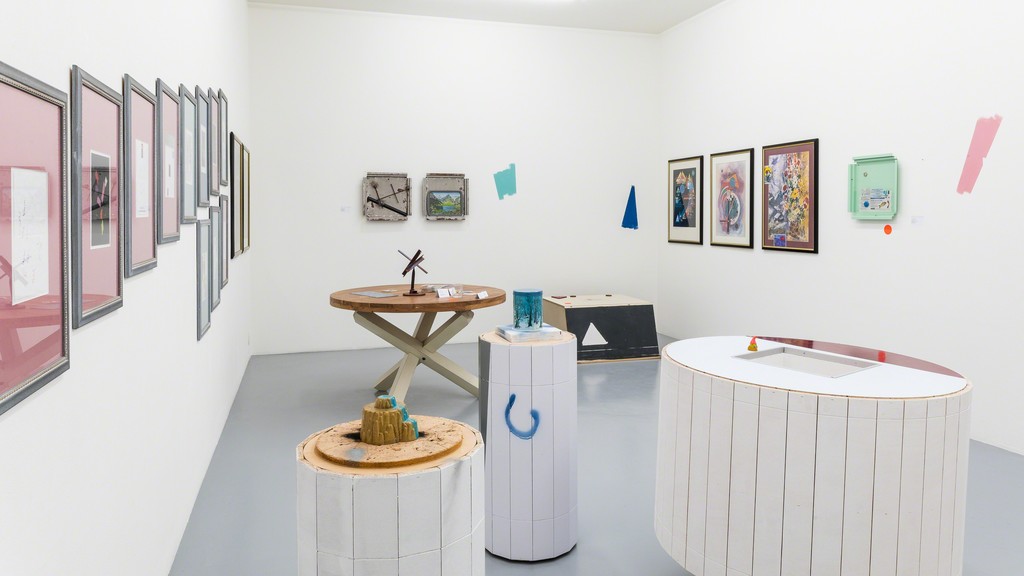 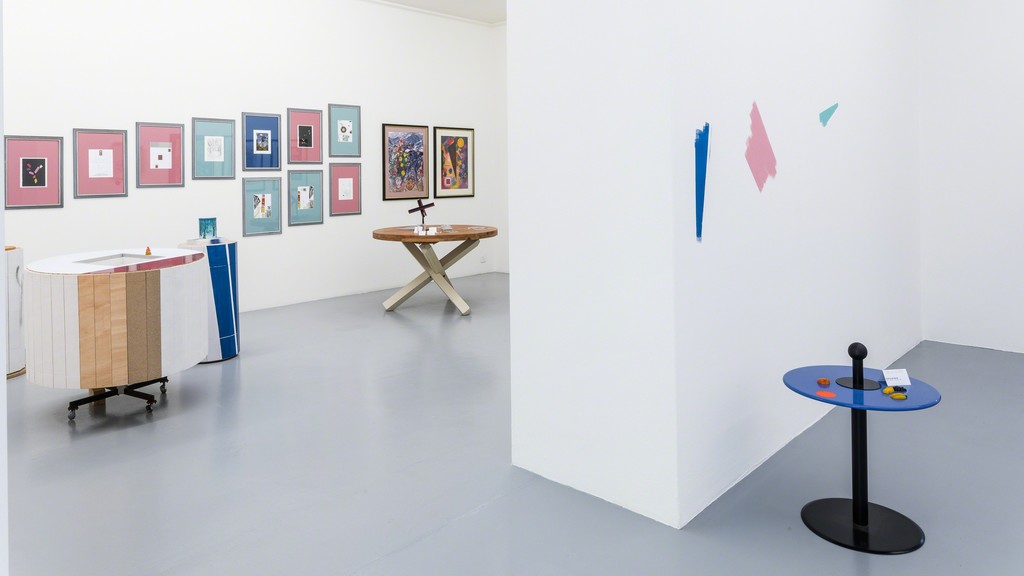 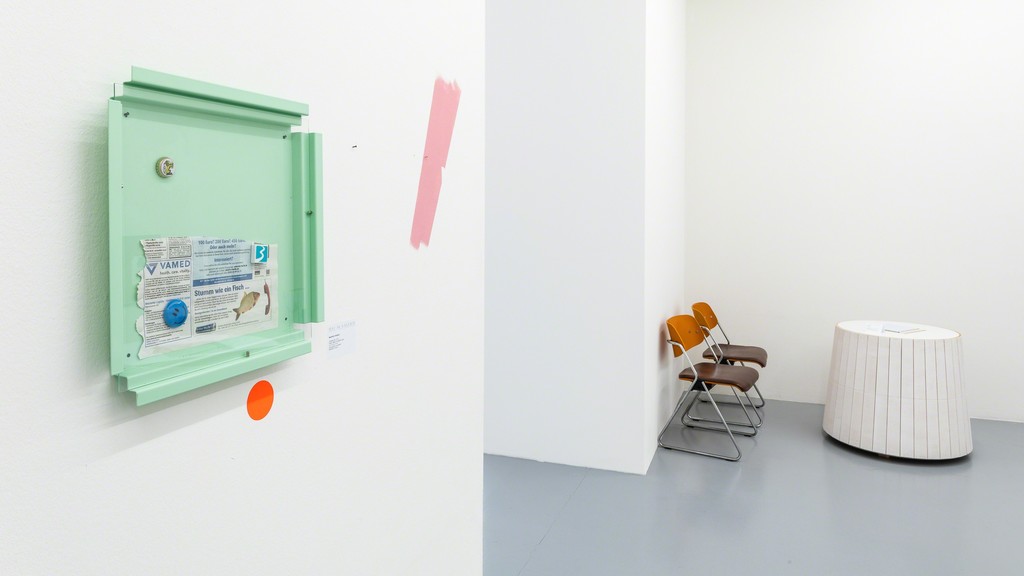 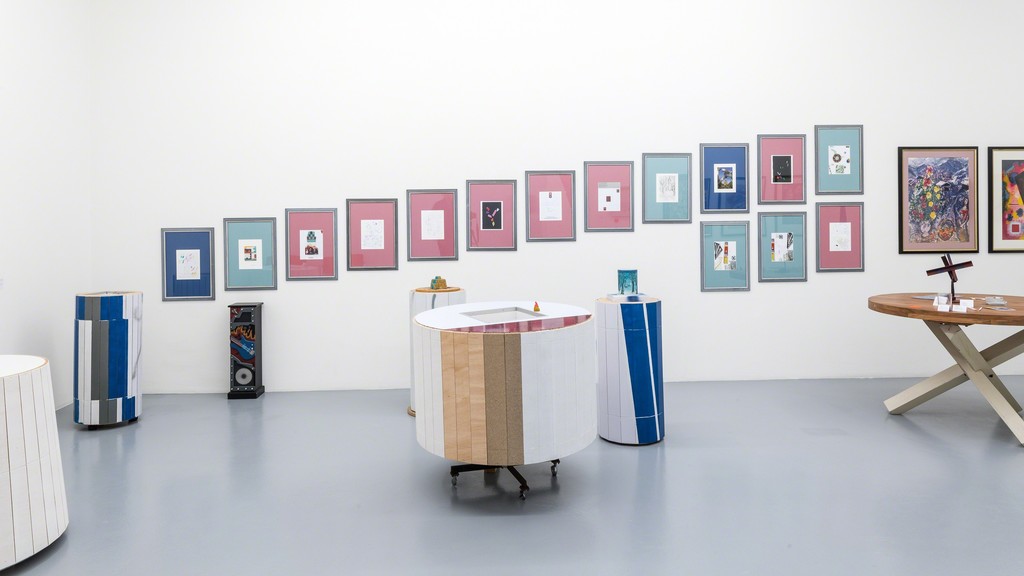 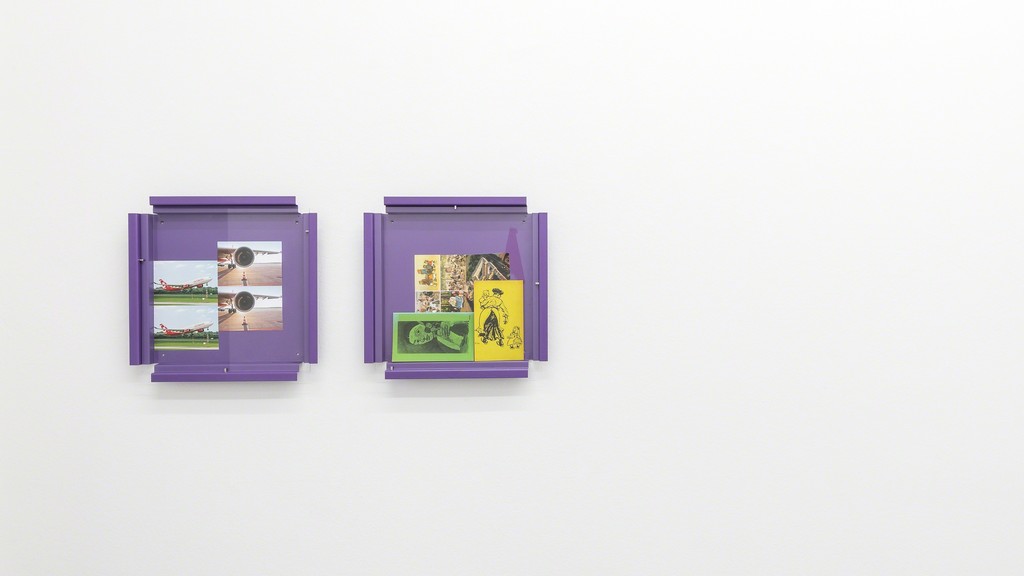 Mai 36 Galerie is delighted to present the fourth solo exhibition by German artist Manfred Pernice.
Manfred Pernice works with a variety of materials, including wood and chipboard, metal, concrete and plaster, combined with various elements and objects, to create works, ensembles and installations. The resulting three-dimensional pieces, composed in an additive process, oscillate between sculptural collage, sculpture, model and installation.
The exhibition Lando (I – VIII, 2018) at Mai 36 Galerie shows new works by the artist, staged as a group and reflecting aspects that might be reminiscent of a furniture store in liquidation (seconds and used goods). The basic elements (cylinders) form the plinths and bases, while at the same time conveying the appearance of vessels or containers (cans) as “reduzierte Plastik”. These “remnants” or “job lots” are complemented by objects that indicate a situational definition or clarification of the concept. The resulting sense of dissolution or disintegration harbours the hope of a new beginning and focused concentration on the essence of things. While their simplicity of form makes them appear at first glance to be functional objects, these elements are also redolent of architectural or spatial fragments, calling into question the function and concept of the space and, with that, the perception and reception of art itself.
Although each individual work is autonomous, the abstract objects nevertheless interact with one another as well as with the visitors meandering through the diffuse boundaries of the exhibition space, between the created space and the real-world space. The exhibition allows viewers to immerse themselves in the world of the artist and, in doing so, to discover their own realms of thought that are opened up to them by their reception of the works. The latently menacing, harmless, anodyne, complex or even friendly “outside world” thus seems to be completely blanked out, and yet at the same time to be present within the exhibition in a surprisingly non-commital way.
Manfred Pernice (born 1963 in Hildesheim, Germany) lives and works in Berlin. He studied graphic art and painting at the Hochschule für Bildende Künste in Brunswick, as well as sculpture at the Hochschule der Künste in Berlin. Since 2012, he has been teaching sculpture at the Universität der Künste in Berlin. Pernice’s works were recently shown in the “2-B Dosenwelt” exhibition at Kunstmuseum St. Gallen and are represented in many important collections, including the Pinakothek der Moderne, Munich and the Solomon R. Guggenheim Museum, New York.