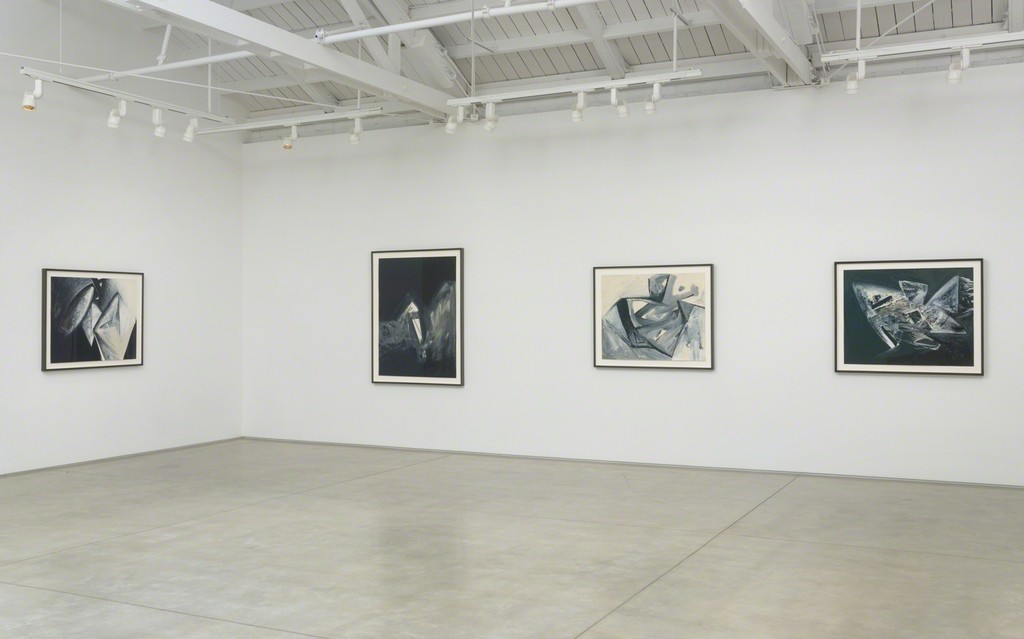 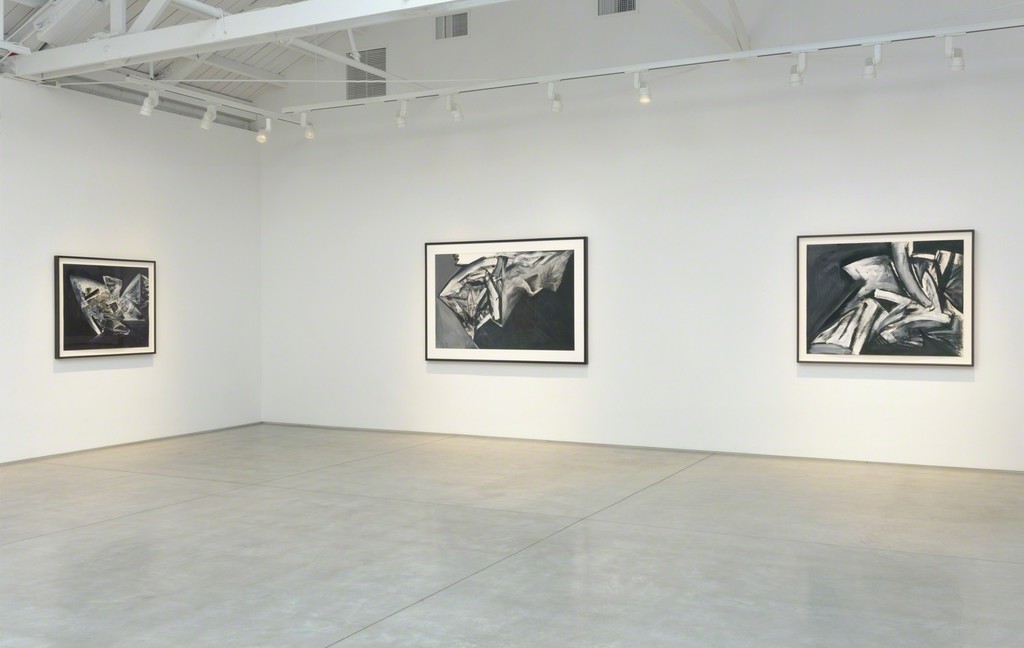 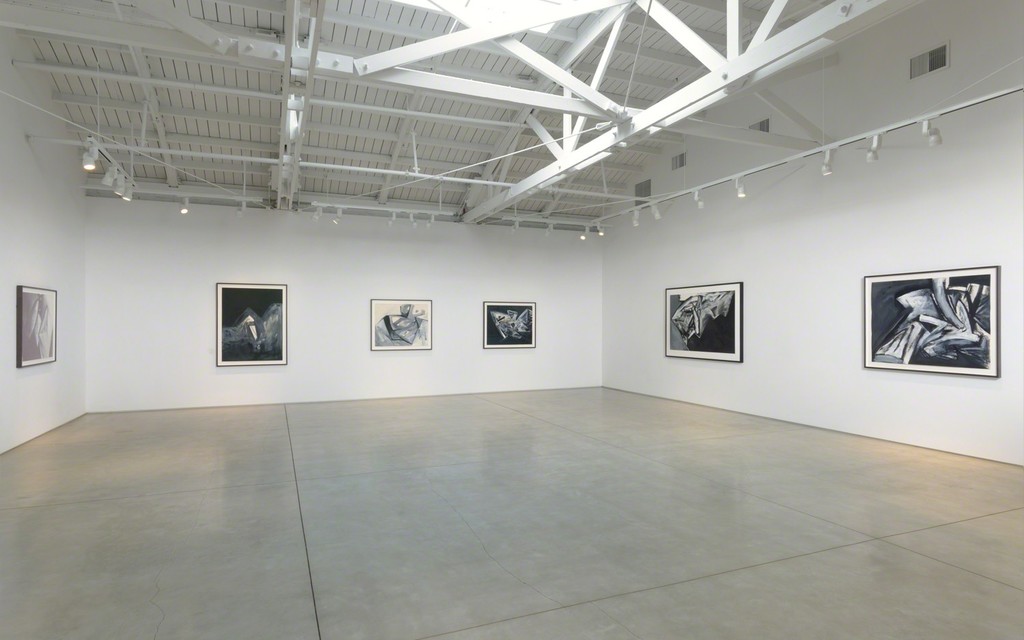 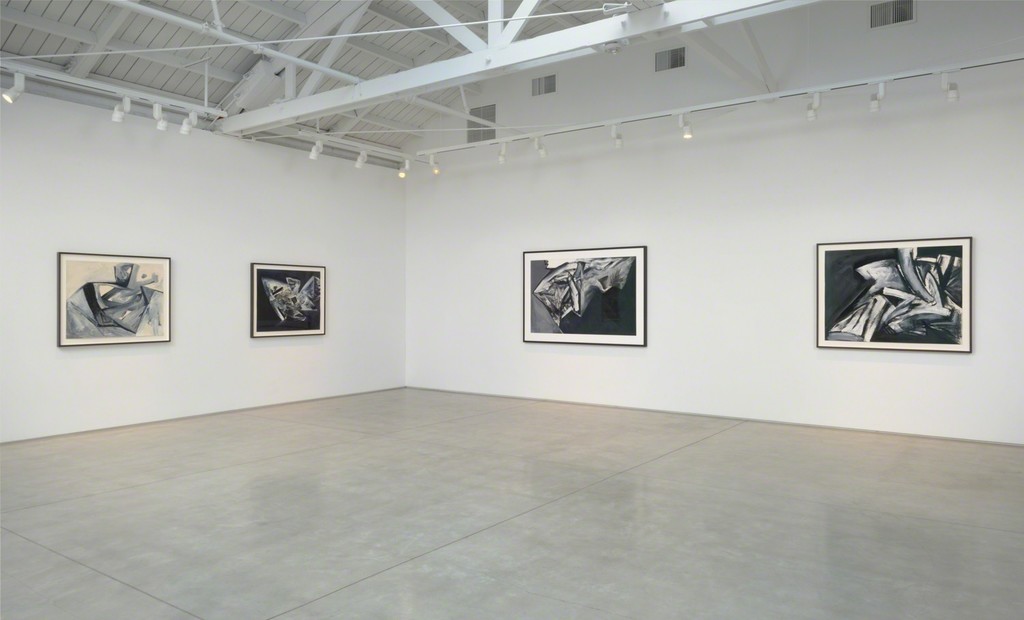 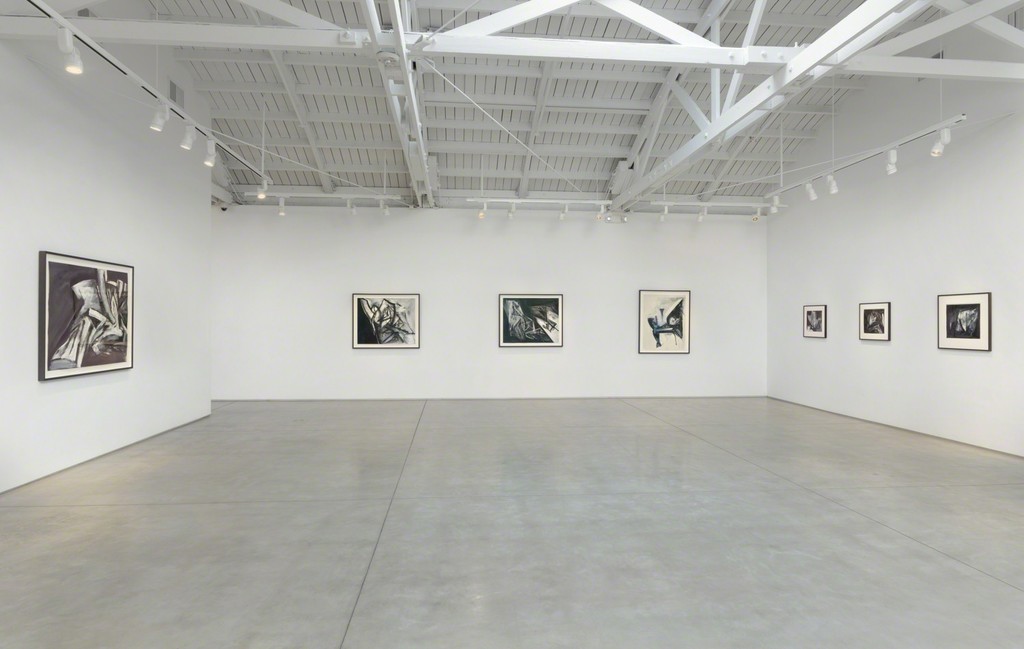 Jay DeFeo (1929-1989) grew up in the San Francisco Bay Area and received her master of arts from the University of California at Berkeley in 1951. In her four decades of art-making, DeFeo created an amazingly diverse and innovative range of works including paintings, collages, works on paper, sculptures, jewelry, photographs and photocopies.

This exhibit highlights DeFeo’s Samurai series, a body of paintings on heavy paper influenced by DeFeo’s 1985 trip to Japan as well as the exhibition Spectacular Helmets of Japan, 16 – 19th Century, which she viewed the same year in San Francisco. Often using images from the catalogue as points of departure, DeFeo created gestural abstractions of energetic marks in an activated, sometimes mysteriously illuminated space. In one such work, Untitled (Samurai series), 1986 (pictured above), sweeping geometric lines and eccentric forms undulate on a rich black background. Brilliant whites and shadowy grays become tactile as the artist layers them with paint and collage to build complex surfaces and textures.

As the first Los Angeles exhibition in almost two decades to focus exclusively on DeFeo’s work, it brings to mind the Bay Area artist’s long and significant connection to the city. In the 1950’s and 60’s, exciting new ideas were flowing between Northern and Southern California, and DeFeo belonged to the innovative group of artists who made Los Angeles’s Ferus Gallery a seminal hub of experimentation. Her work appeared in the celebrated Action 1 show of West Coast artists, organized in 1955 by the curator Walter Hopps on the Santa Monica pier, and in the Ferus Gallery inaugural exhibit in 1957. DeFeo developed close friendships with a number of LA artists, including George Herms, Craig Kauffman, and Wallace Berman. Herms described her as the “West Coast de Kooning.” Billy Al Bengston recalled that DeFeo “had style, moxie, natural beauty and more ‘balls’ than anyone…. Her attitudes and line style were an important source of inspiration.”

Hopps proved to be a particularly avid and consistent supporter of her work, presenting a solo show at Ferus in 1960. “I think Dorothy Miller got it right with that Sixteen Americans show [at the Museum of Modern Art in NY in 1959],” he said. “Miller had four of the greatest artists of my time in that show -- Rauschenberg, Jasper Johns, Frank Stella, and Jay DeFeo, all of whom I value on the same level.” When DeFeo was forced to vacate her Fillmore Street studio in 1965, before finishing her masterpiece, The Rose, Hopps arranged for the painting to be transported to the Pasadena Art Museum, where DeFeo continued to work on it until completion. The Rose had its first public showing in Pasadena in 1969. During her lifetime, DeFeo had more shows in Los Angeles than in any other city besides San Francisco.

DeFeo works can be seen in Los Angeles at the Los Angeles County Museum of Art, where The Jewel is on permanent exhibit, as well as at the Museum of Contemporary Art, Los Angeles, the Norton Simon Museum, UCLA’s Hammer Museum, and the J. Paul Getty Museum. DeFeo’s work is also included in the permanent collections of the Museum of Modern Art, New York, Menil Collection, Houston, Art Institute of Chicago, British Museum, London, Centre Pompidou, Paris, and San Francisco Museum of Modern Art, among many others.

In 2013, the Whitney Museum of American Art presented Jay DeFeo: A Retrospective, featuring more than 150 seminal works by the artist.

A fully illustrated catalogue has been published on the occasion of the exhibition and is available at the gallery.