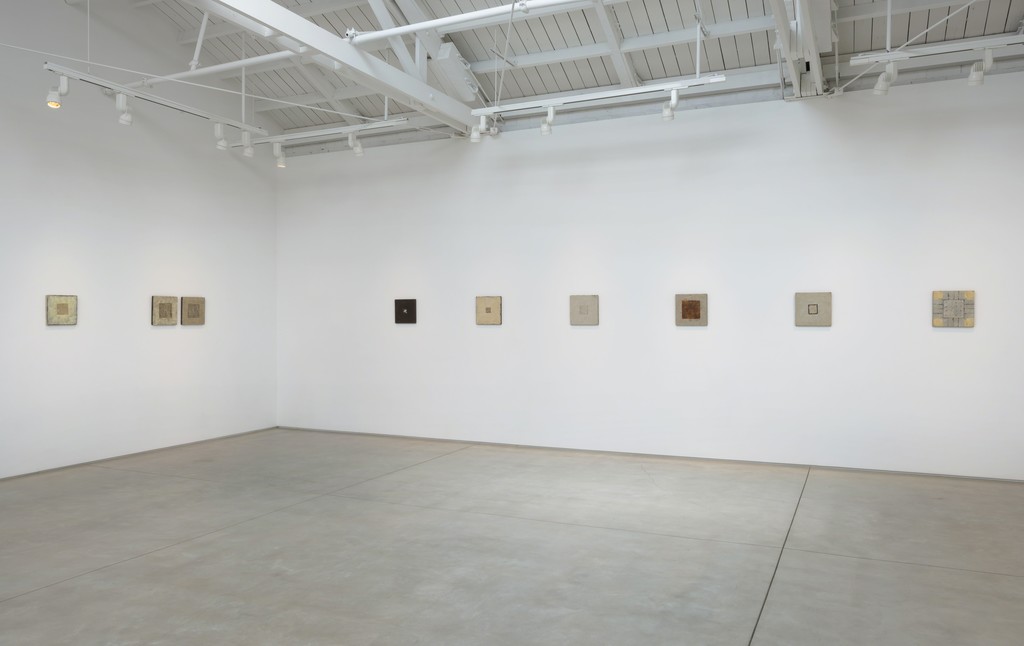 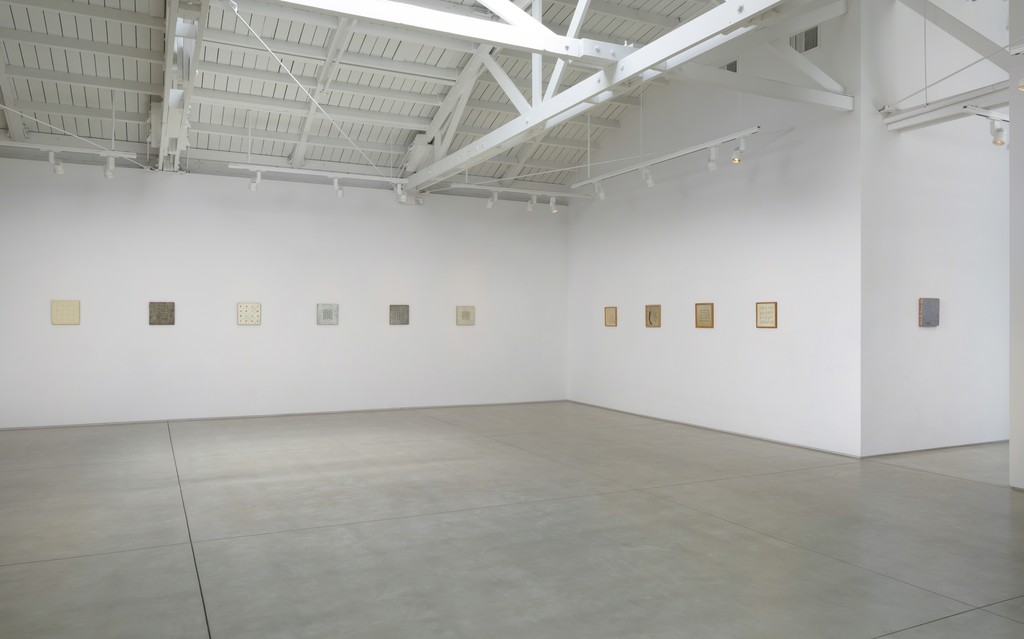 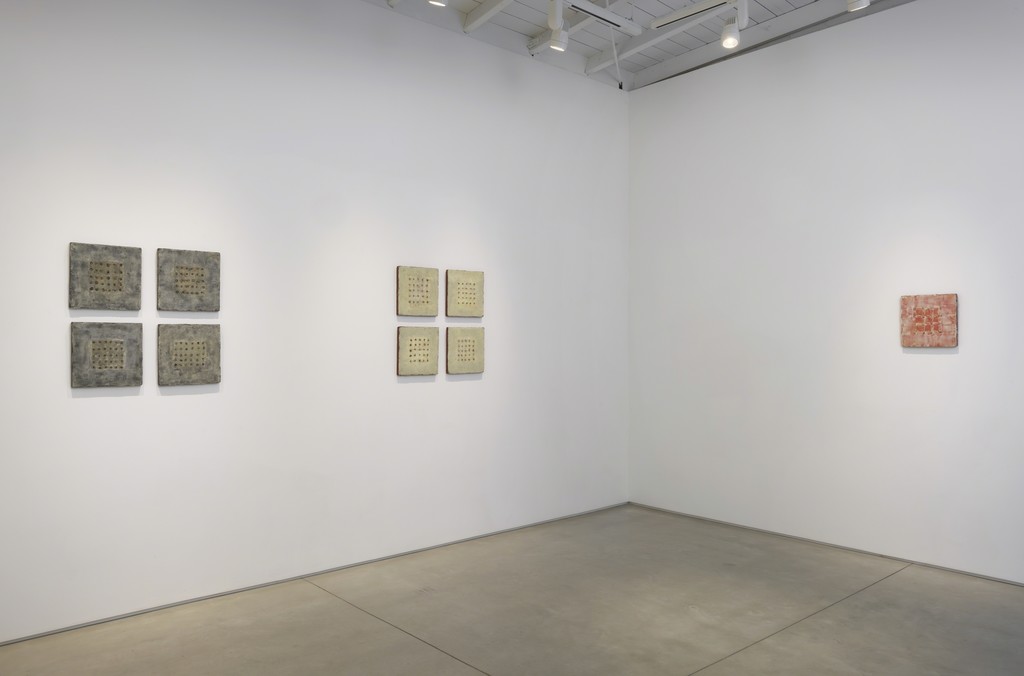 Marc Selwyn Fine Art is pleased to announce Seed Gardens, our second one-person exhibition of works by Michelle Stuart. Featuring approximately twenty-five works, it is the first full-scale presentation of Stuart’s series of Seed Paintings, created during the early and late 1990s.

Seed Gardens precedes a major presentation of works from the 1960s to the present by Michelle Stuart in Arte Viva Arte at the 57th Venice Biennale, including three works from the seed paintings group. In this series, the artist continues her pioneering use of non-traditional materials, merging science, botany and the collection of organic specimens. Seeds collected from treks along coastal areas of California, Oregon, and New York, are embedded in translucent encaustic beeswax, forming grid-like patterns which are sequential, even calendrical in nature, emphasizing that seeds are part of a continuum. They play a crucial role in the cycles of life, representing the potential for growth, the storage of genetic knowledge through dormancy, and the future itself. As Stuart recalls:

“I read in a Journal of Archeological Science about the pollen grains and lotus seeds that were found buried in a boat within the precinct of the archeological dig in Xi’ian, China. They dated from around 210 B.C. Botanists later planted six seeds and four of them sprouted. To me that was revelatory, the fact that a seed can still retain its life force within its shell for thousands of years is one positive thought among many not so positive thoughts about the state of our world.”

With compositions recalling the minimalist grids of artists like Agnes Martin and Sol Lewitt, these works address the metaphysical, while remaining deeply connected to their own physicality and the implications of their materials.

Since the 1970s, Michelle Stuart has been internationally known for a rich and diverse practice, including site-specific earth works, intimate drawings, multimedia installations, paintings, sculpture and photographs all centered on a lifelong interest in the natural world. Stuart brings forth imagery by using natural materials in unique ways, situating them in a new context which informs the fundamentals of painting.

Born in Los Angeles, Michelle Stuart lives and works in New York and California. Recent individual museum shows include: Michelle Stuart, Theatre of Memory: Photographic Works at The Bronx Museum of the Arts, Bronx, N.Y and Michelle Stuart: Drawn from Nature, which originated in 2013 at the Djanogly Art Center, Nottingham, UK and traveled to the Parrish Art Museum, Water Mill, NY, and the Santa Barbara Museum of Art, accompanied by a catalogue published by Hatje Cantz. Her work has also been the focus of solo shows at the Centre d’Arts Plastiques Contemporaines de Bordeaux, France; the Institute of Contemporary Art, London; the Walker Art Center, Minneapolis; the Haags Gemeentemuseum, The Hague; and many other major museums and galleries worldwide.

She has participated in numerous group shows and international surveys ranging from Documenta VI, Kassel in 1977 to Ends of the Earth: Land Art to 1974 at the Museum of Contemporary Art, Los Angeles, and the Haus der Kunst, Munich in 2012; Apparition: Frottages from 1860 to Now, at the Hammer Museum, Los Angeles and the Menil Collection in Houston in September, 2015; America is Hard to See, the inaugural exhibition at the Whitney Museum of American Art, New York; and Revolution in the Making: Abstract Sculpture by Women, 1947 – 2016, Hauser Wirth & Schimmel, Los Angeles.

Major works by the artist were recently acquired by the Tate Gallery; the Whitney Museum of American Art; and the Metropolitan Museum of Art; the Hammer Museum, the Menil Collection; the Santa Barbara Museum of Art, and are also in the collections of the Los Angeles County Museum of Art; The Museum of Modern Art, New York; the Museum of Contemporary Art, Los Angeles; the Moderna Museet, Stockholm; the Kaiser Wilhelm Museum, Krefeld; the San Francisco Museum of Modern Art; the National Gallery of Art, Washington, D.C.; the Museum of Contemporary Art, Chicago; the Art Institute of Chicago; the National Gallery of Australia, Canberra; and many other distinguished institutions.