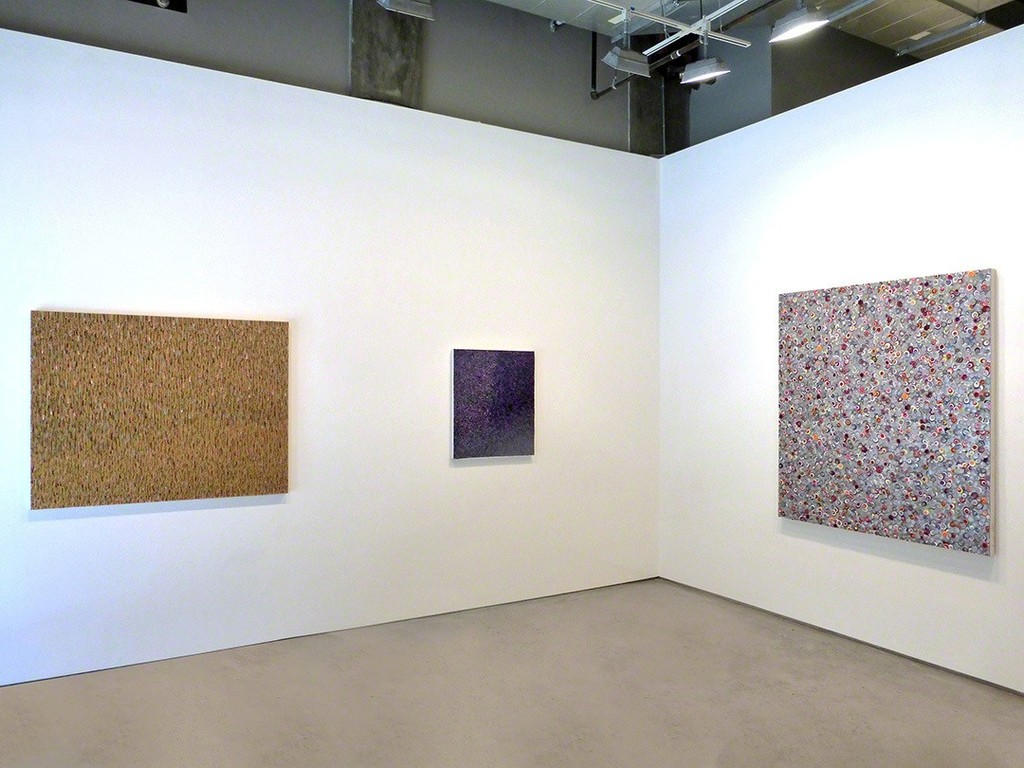 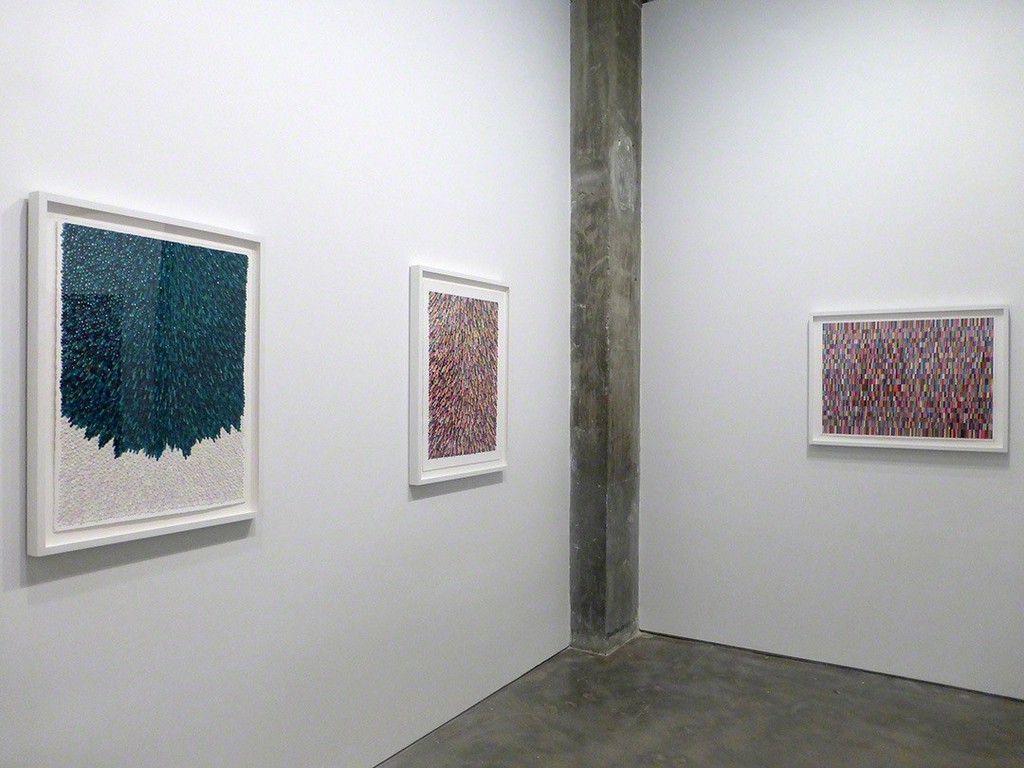 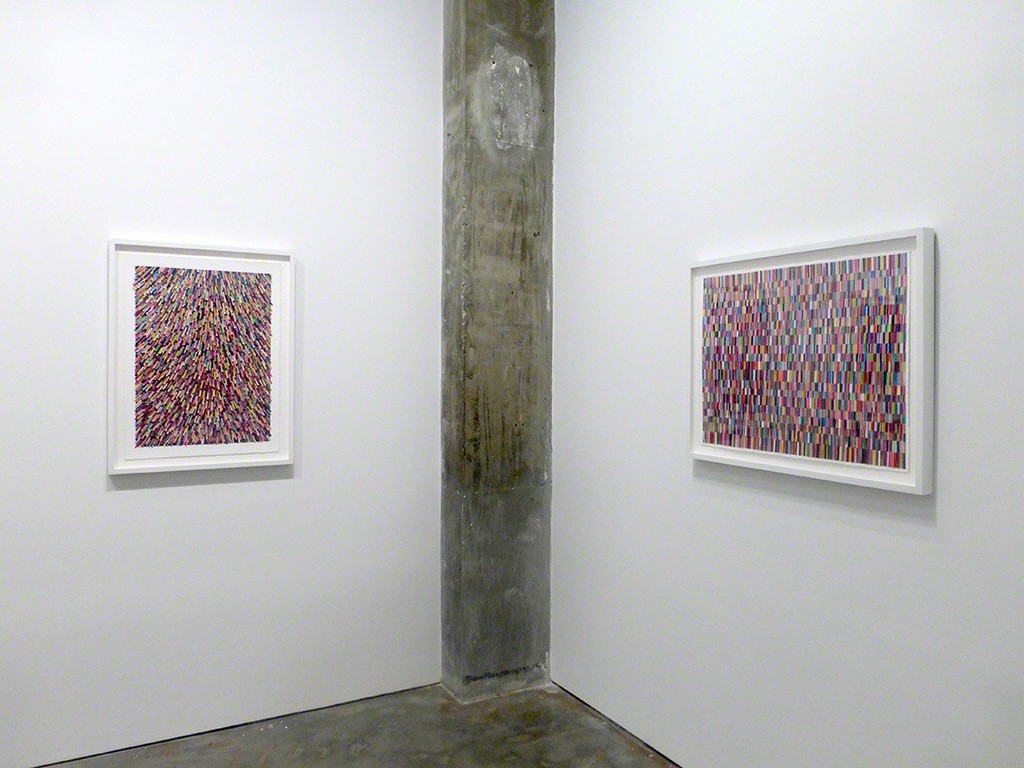 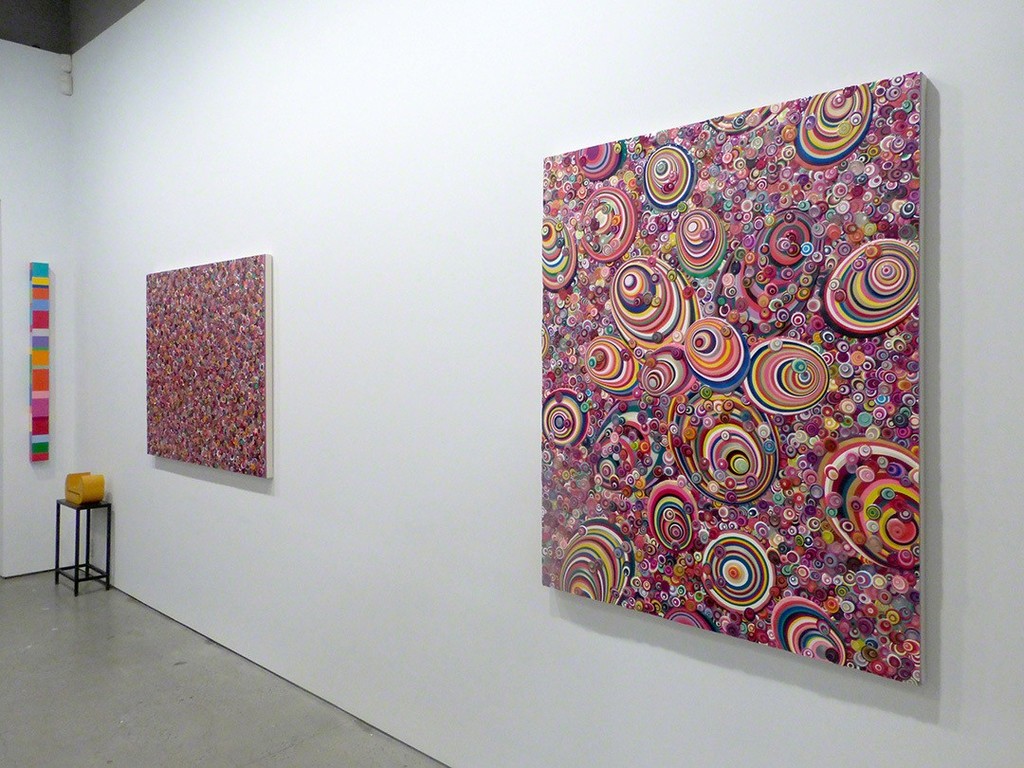 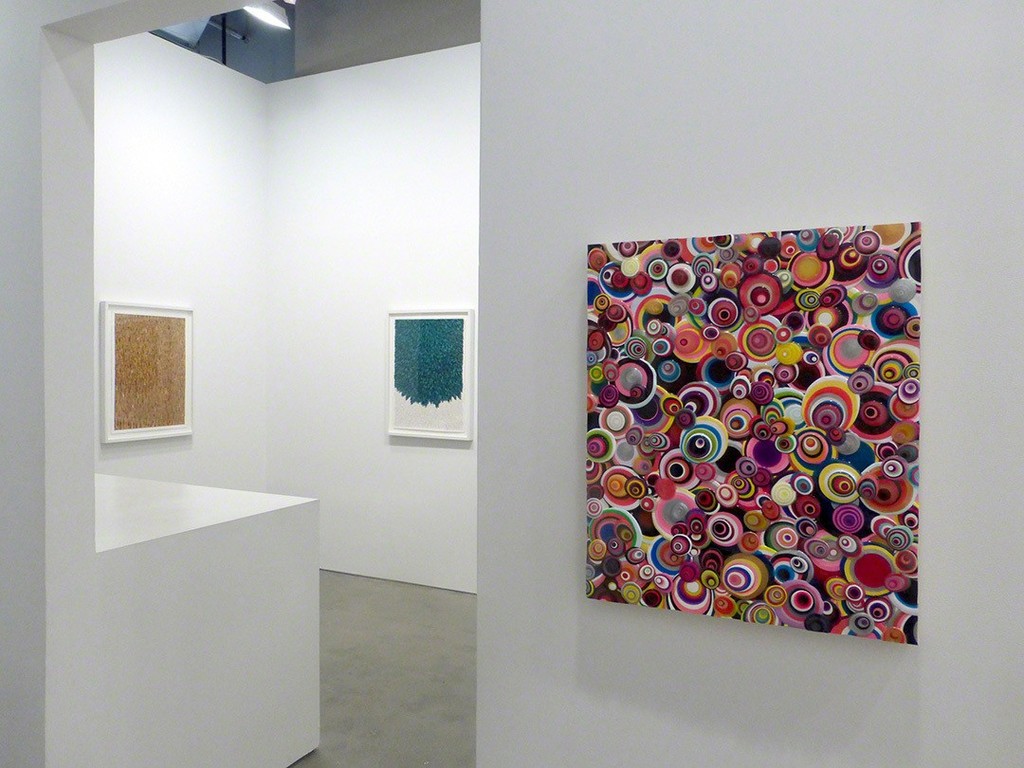 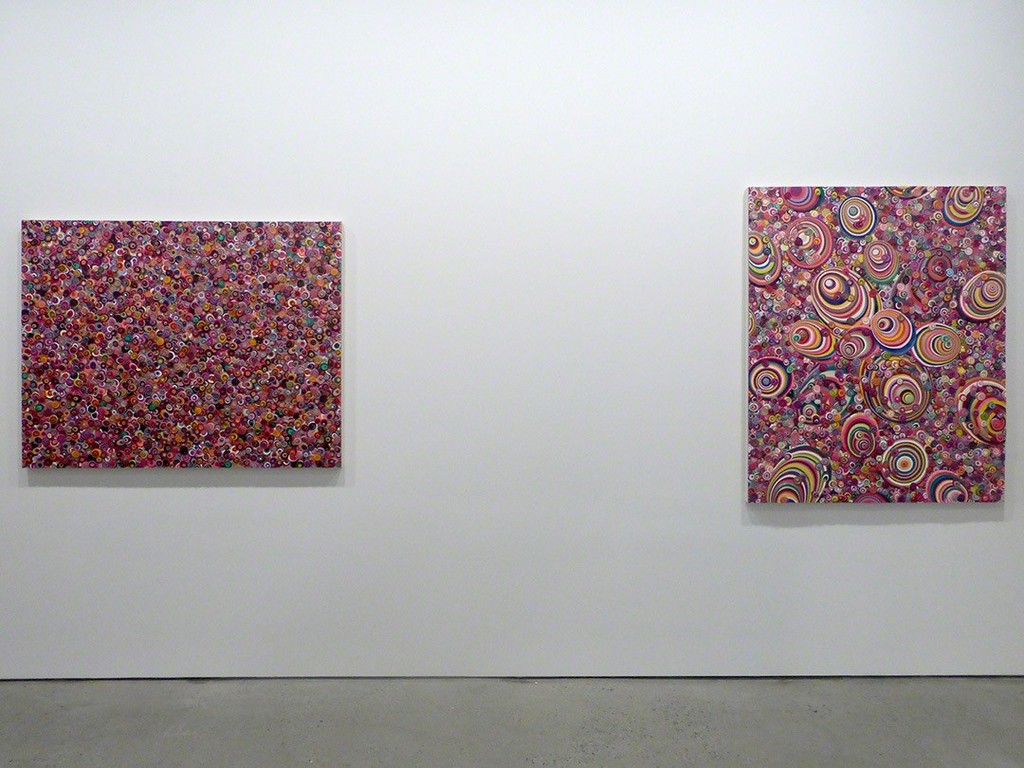 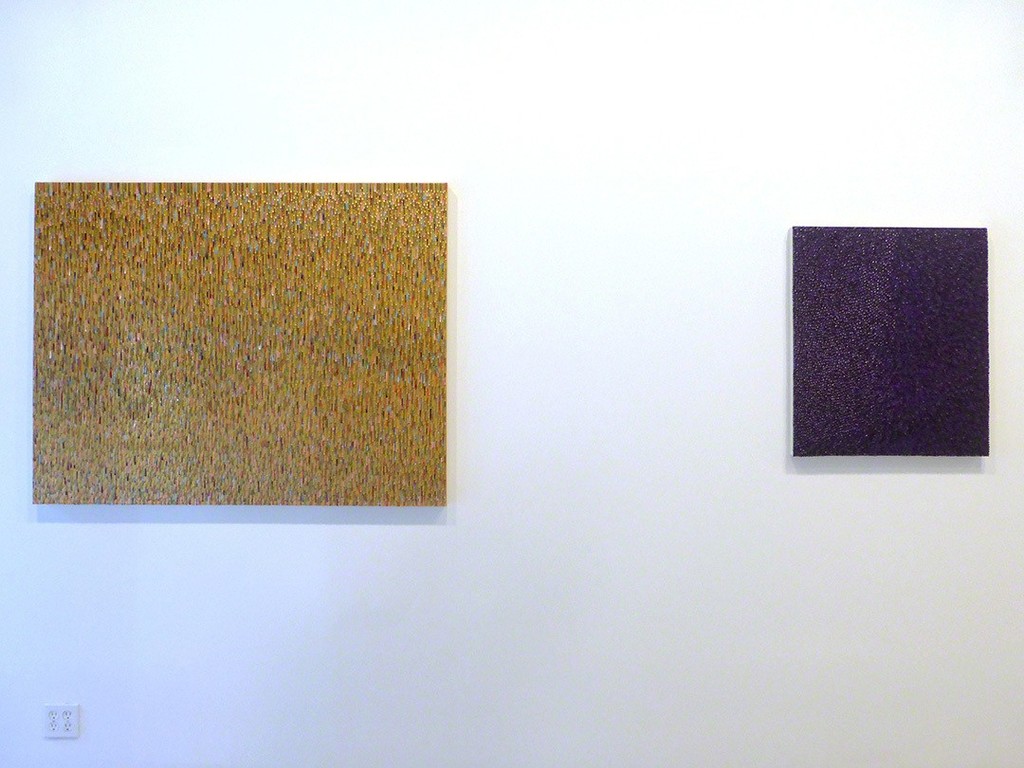 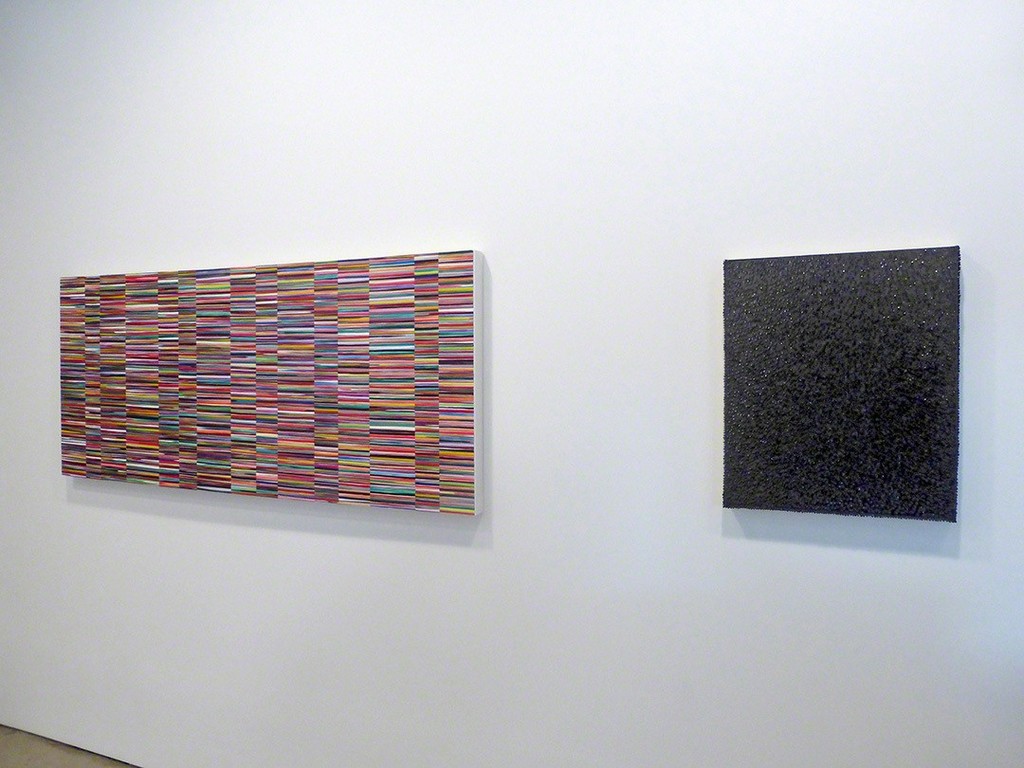 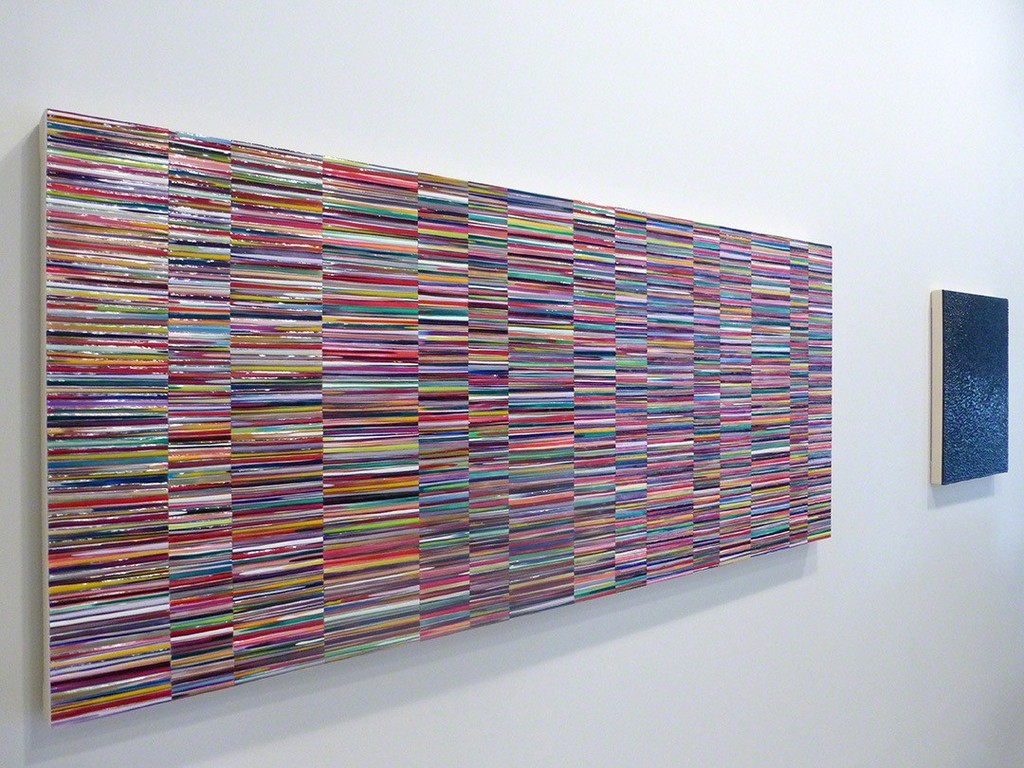 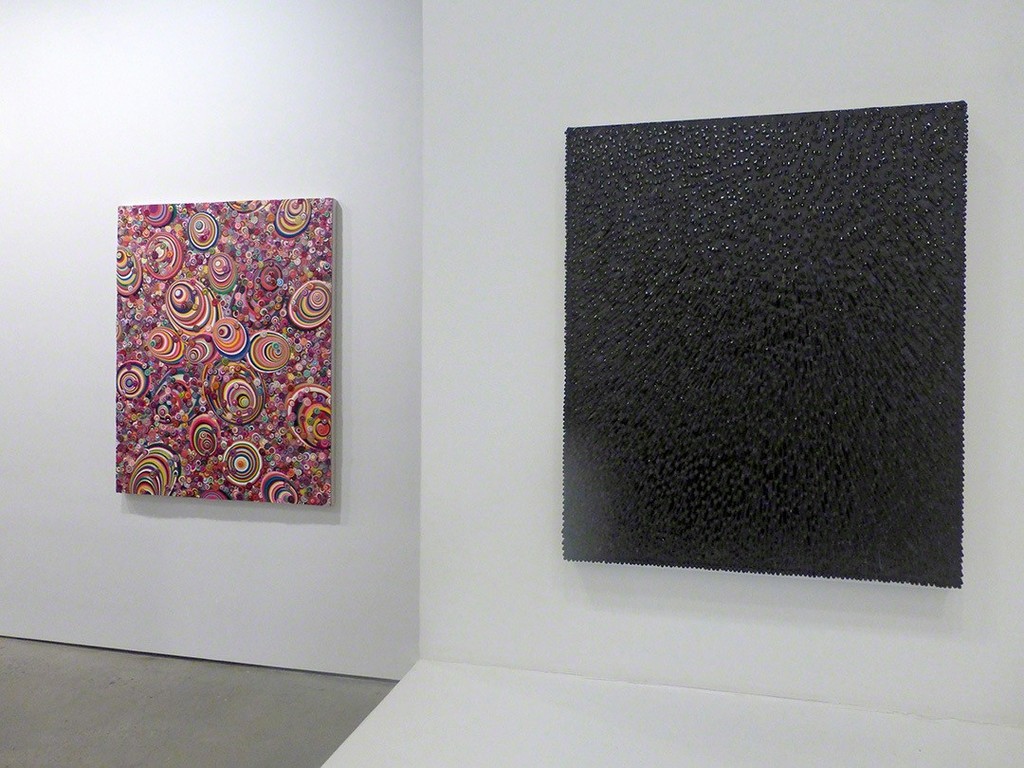 Margaret Thatcher Projects is pleased to present Las Mesalinas y Otros Ensayos, an exhibition of paintings by Omar Chacon. In his third solo show at the gallery, Chacon’s work intertwines his heritage with his interest in classical Roman culture and myth.

Chacon’s colorful and energetic configurations symbolize both the unity and diversity of the Americas, specifically Colombia, where he was born and raised and New York, where he currently lives. He likens his works to a social gathering and on a larger scale, a nation, comprised of a diverse blend of culturally different peoples, living amongst each other with a sense of unity, yet maintaining individuality. Each oval and drip is unique, prepared separately off the canvas. Chacon then applies and collages these “brushstrokes” onto canvas or paper, building intricate and harmonious compositions.

Introducing deeper shades of gold and purple, drawing inspiration from the traditional imperial colors of the Roman monarchies, the artist explores the delicacy and power of the monochrome, with works such as RT Mesalina and Mesalina Negra. Rich with subtle movement and variation throughout, these works showcase a fresh layer of complexity. Chacon’s 2012 exhibition, Bacanales Tropicales, referenced the wild and festive spirit of the god Bacchus. Continuing to draw energy from the history of Greco-Roman excess, he titles the exhibition after Valeria Messalina, the wife of the Emperor Claudius -- a woman who has been much maligned for her devious ways. The raucous tales of her exploits, real or exaggerated, fascinate Chacon as they have writers and fine artists throughout the centuries.

Omar Chacon was born in Bogota, Colombia. He received his MFA from the San Francisco Art Institute, CA and his BFA from the Ringling School of Art and Design, FL. His work has been exhibited nationally and internationally in cities such as Los Angeles, Milan, San Franciso and Mexico City. Recently, Chacon participated in exhibitions at the Children’s Museum of the Arts in New York, NY and the Mobile Museum of Art in Mobile, AL. In 2009, Chacon was selected as part of the Queens International Four at the 2009 Biennial at the Queens Museum of Art, New York. He is the recipient of numerous awards including the 2007 William and Dorothy Yeck Award through the Miami University National Young Painters Competition and the 2008 New York Foundation for the Arts Fellowship. His paintings have been reviewed in Art & Antiques, Artnet, Art in America and Artweek Magazine, among others.