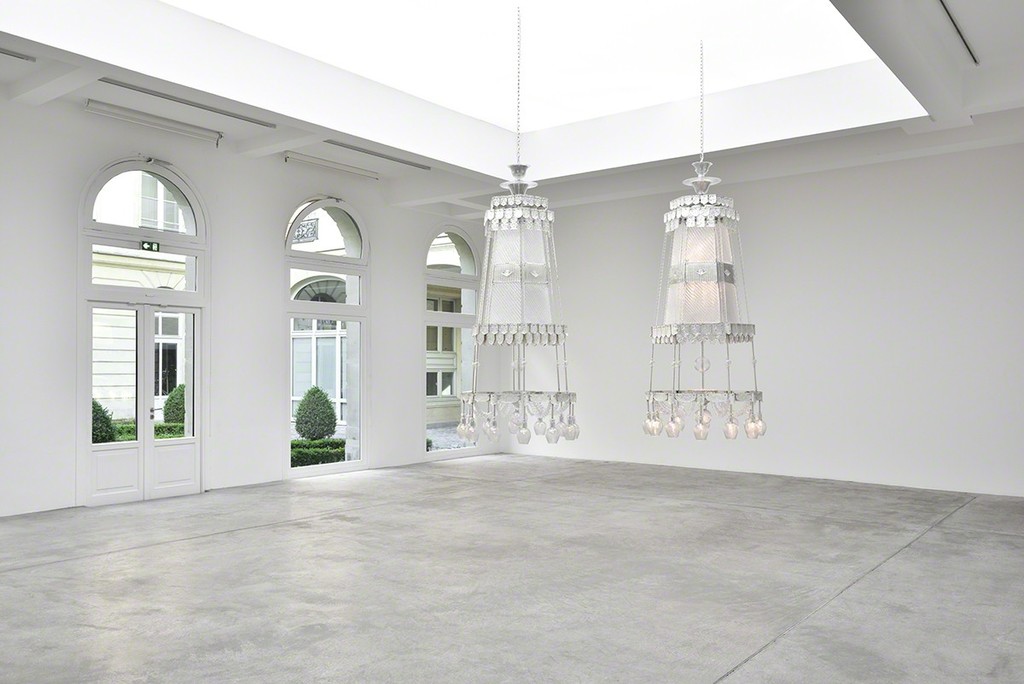 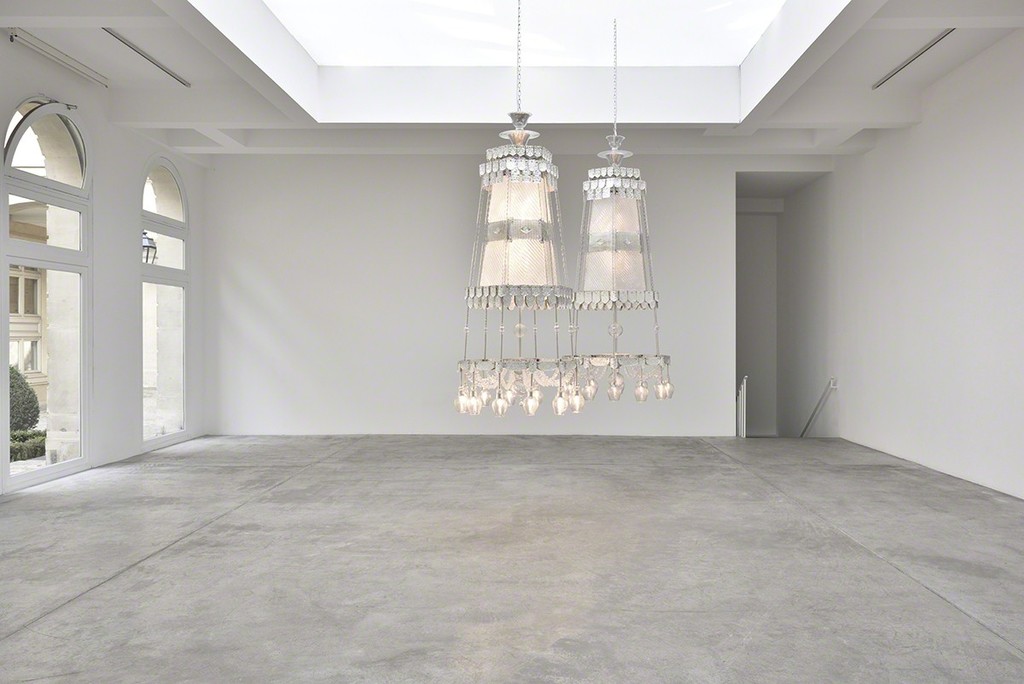 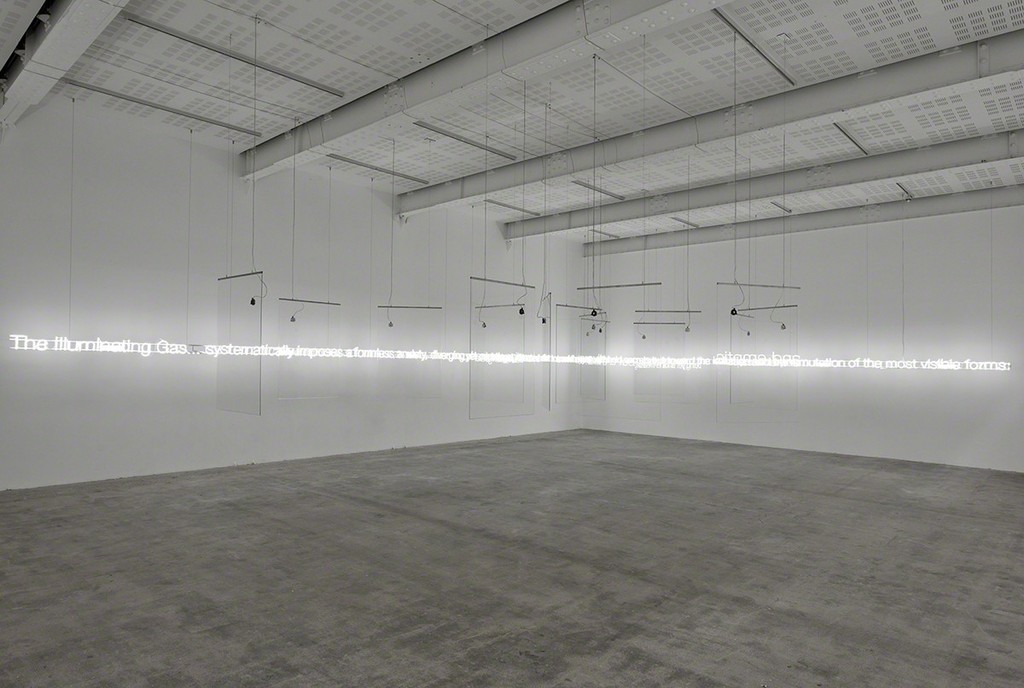 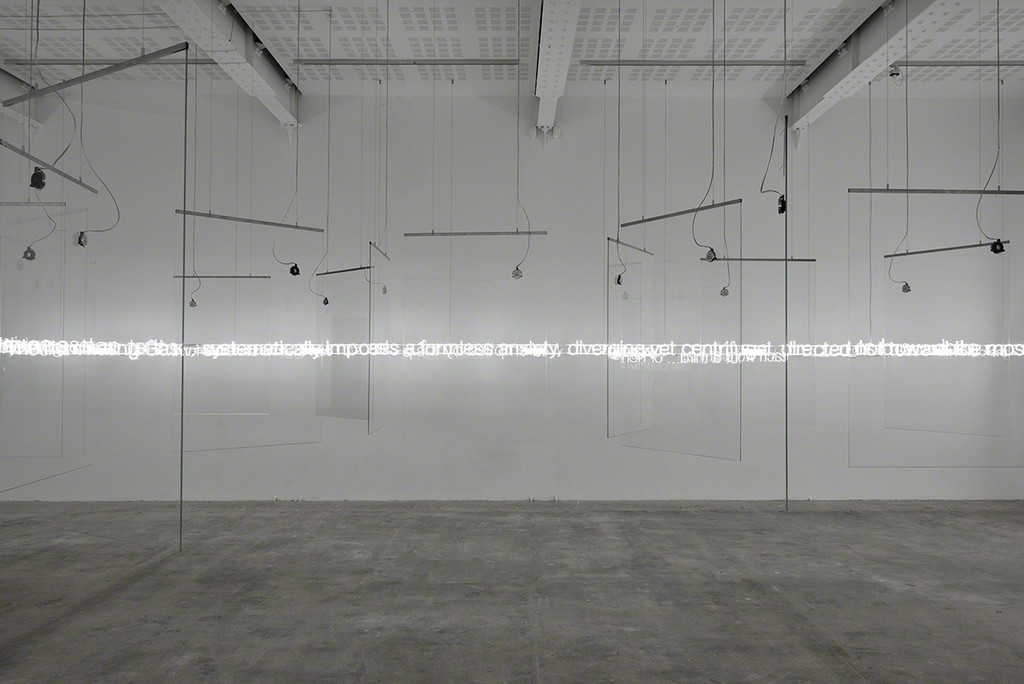 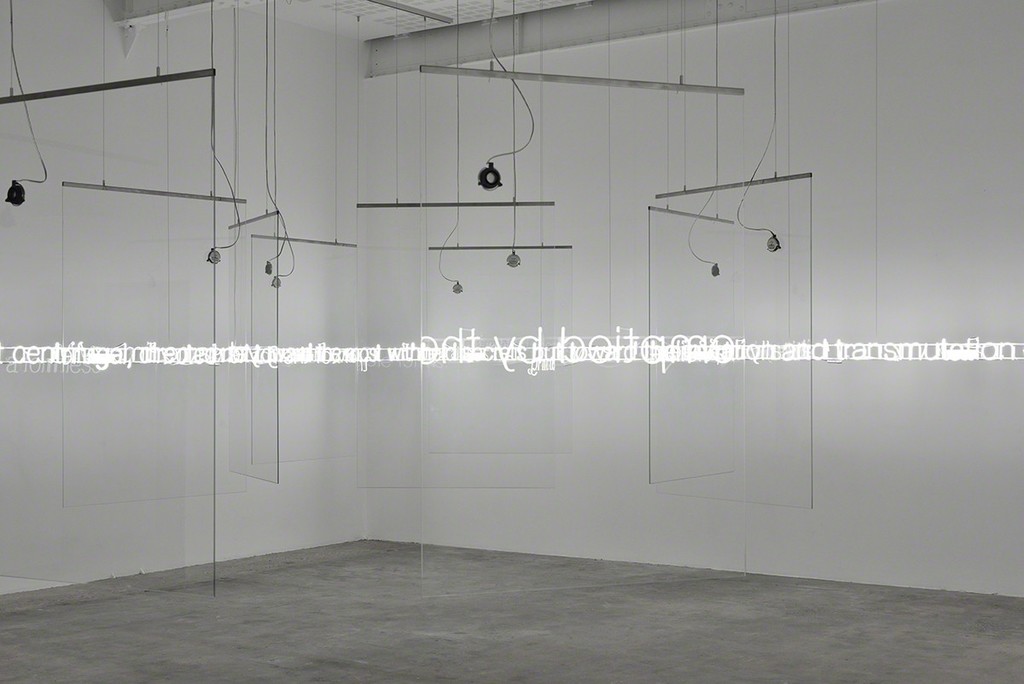 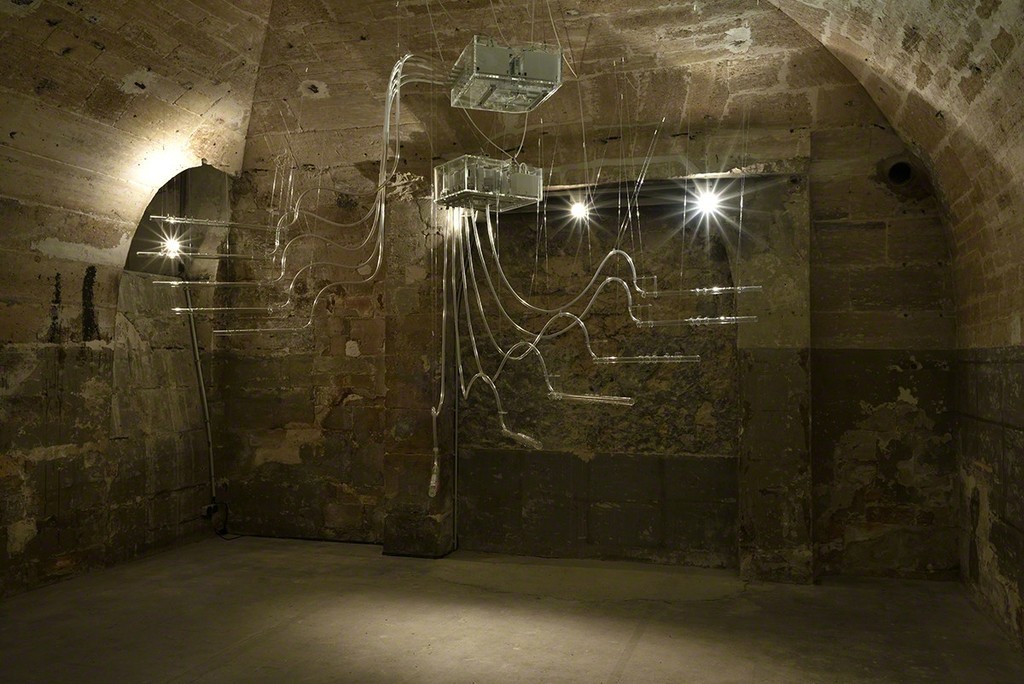 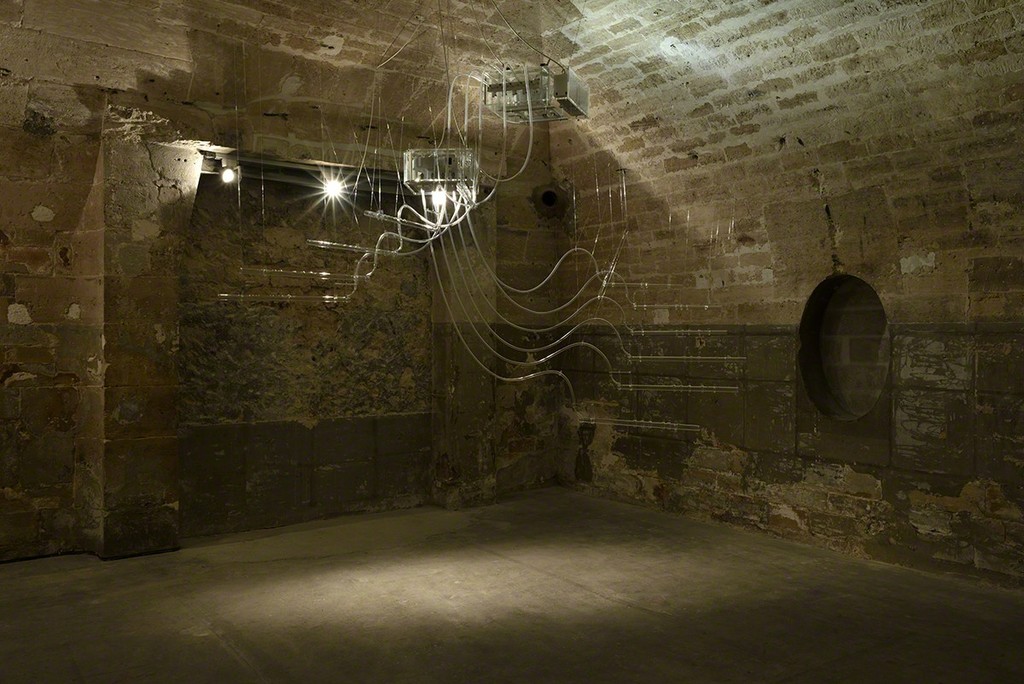 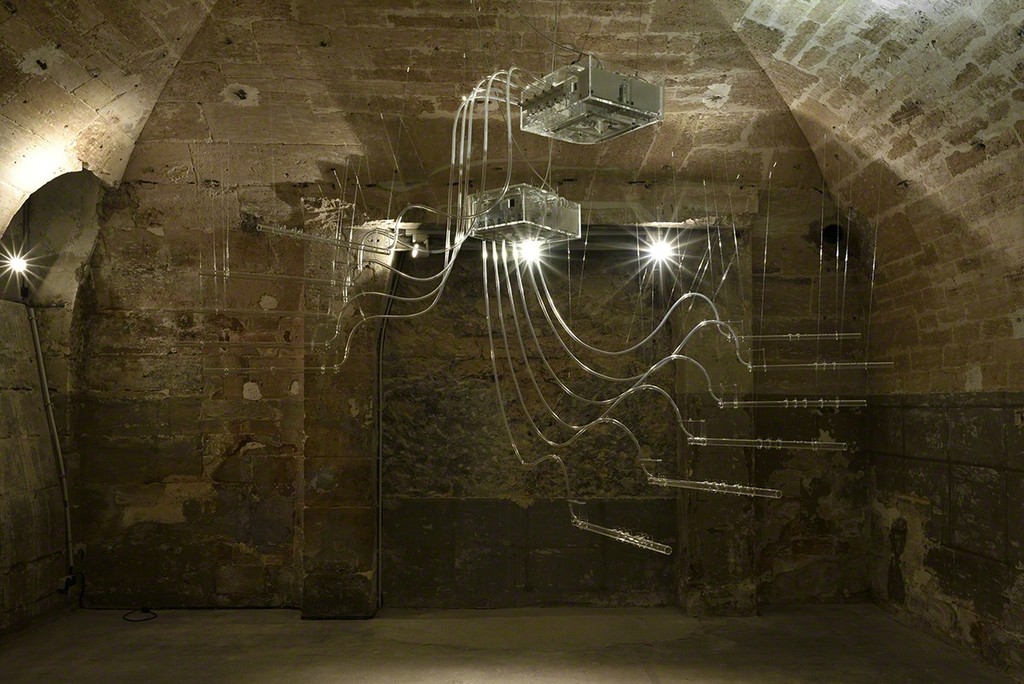 Marian Goodman is pleased to present the first exhibition of works by Cerith Wyn Evans at her Paris-based gallery, where the artist unveils a body of new sculptural, light and sound works that unfold in a carefully choreographed arrangement. As its title suggests, the show plays with the visible and the invisible, the material and the immaterial as well as the viewer’s senses and perceptions. The exhibition simultaneously orchestrates luminosity and sound vibrations, offering a synesthesia like experience. While only a small percentage of individuals experience this neurological phenomenon that can cause a merged sensory experience for any of the senses, this show specifically blends sound and light impressions as one experience. Indeed, true the very nature of the artist’s work, the show itself is also—to use the critic Molly Nesbit’s words—“a rendez-vous of questions marks.”

On the ground-floor, two majestic, over two-meter tall chandeliers interchange through light and music. Manufactured from Murano blown glass, these light fixtures are a modern response to Eastern precedents. The subtle light they emanate is triggered by a computer program set to the rhythm of two piano scores composed and played by Wyn Evans himself. While each chandelier is programmed with its own distinct musical set, they nonetheless interact with and reflect each other’s light patterns, as if holding a conversation. For three hours a day, however, the two light fixtures synchronize and flicker in unison.

The chandelier, whatever its form or aesthetics, holds a privileged place in Evans’s practice. It symbolizes a vector both of transmission and of communication. It “speaks” a cryptic language, since the message it conveys is often relayed through Morse code. Raised speaking Welsh, Evans often engages in translation in his artistic practice: here, he transcribes music into light; elsewhere, he transposes a quotation, sound vibrations, or the movements of Japanese Noh theatre into the syntax of light.

The lower level features a large installation comprised of fifteen transparent glass panels suspended from the ceiling and complemented by sentence in neon lights as a frieze along the walls. Once again, another soundtrack composed by the artist emanates from tiny speakers embedded in the glass panels. One experiences a sensation of vertigo as the luminous segments of the neon lights reflected by the panes of glass seem to proliferate infinitively. As a result, the text, freely adapted from a quotation by Michel Foucault is nearly illegible, yet reads:

“The Illuminating Gas [...] systematically imposes a
formless anxiety, diverging yet centrifugal, directed
not toward the most withheld secrets but toward
the imitation and the transmutation of the most
visible forms: each word at the same time
energized and drained, filled and emptied by the
possibility of there being yet another meaning, this
one or that one, or neither one nor the other, but a
third, or none...”.

An erudite artist, Cerith Wyn Evans often borrows excerpts from literary, poetic, or philosophical works: for him, the aforementioned
quotation takes on the function of a “found object.” The artist asserts his appropriation of the textual material. At the same time, he also emphasizes the decontextualization of these borrowings: “a seancelike evocation of intertextuality”. In a labyrinthine web of references and reflections, the viewer is faced with a plethora of interpretations.

In the adjacent vaulted room, flutes and tubes made of transparent glass form an aerial, hanging sculpture. Running on a computer program, like that of the chandeliers, this new kind of “instrument” operates autonomously, and endows the impression of respiration.

At the Librairie Marian Goodman, located at 66 rue du Temple, Cerith Wyn Evans has selected a group of artworks by Antonin Artaud, Isa Genzken, Pierre Klossowski and Lawrence Weiner, all of whom have relationships “in concert” with literature and/or language.

Going on concurrently with the exhibition at the Galerie Marian Goodman, the Tate Britain in London is featuring a large installation by Cerith Wyn Evans. On view through August 20th, Forms in Space … by Light (in Time) was specially commissioned for the Duveen Galleries and is composed of over two kilometers of neon lights suspended from the ceiling; the installation alternates straight lines with curves and spirals, all of which are hung from above like a “drawing in space.” For her exhibition Viva Arte Viva at this year’s Venice Biennale, Christine Macel invited Evans to showcase his Pasolini Ostia Remix, a film from 1998 made in homage to the Italian poet and filmmaker. Furthermore, on the occasion of Skulptur Projekte 2017 in Münster, from June 10 to October 1st, the artist will reveal a new light and sound installation in one of the city’s churches. Lastly, Evans is also among the artists selected to participate in Lyon Biennale in September 2017, while the Museo Tamayo in Mexico City has granted him a solo show to open in February 2018.