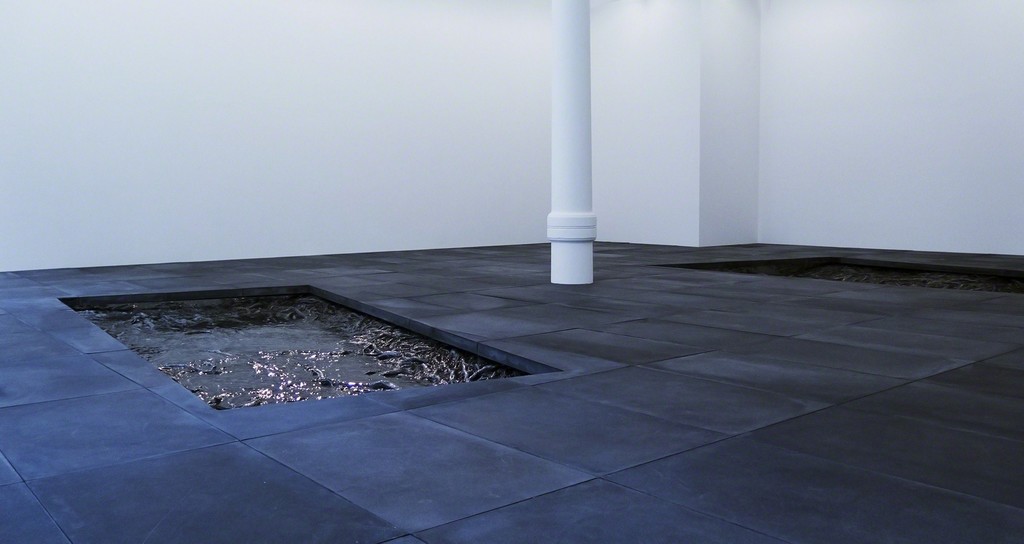 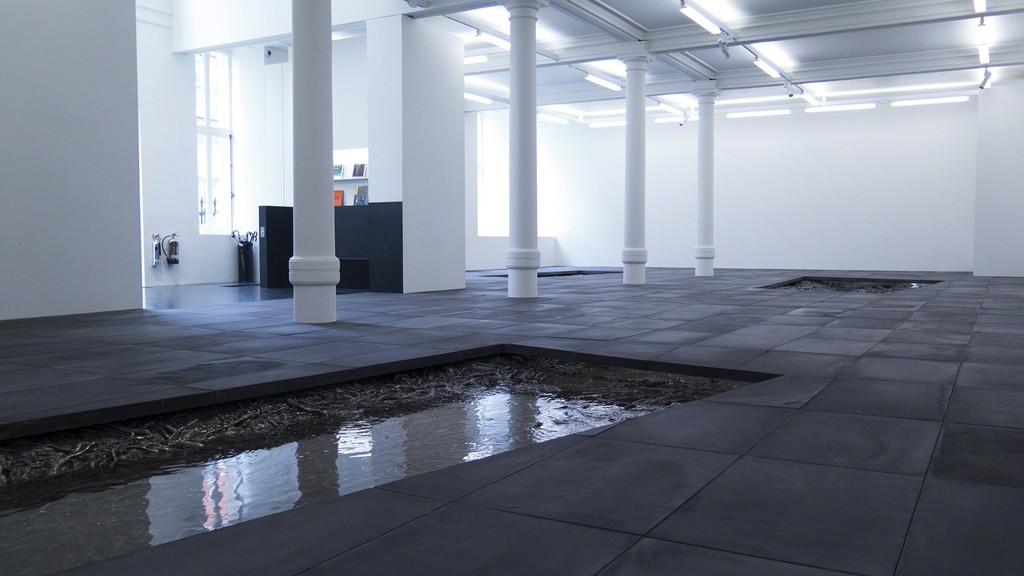 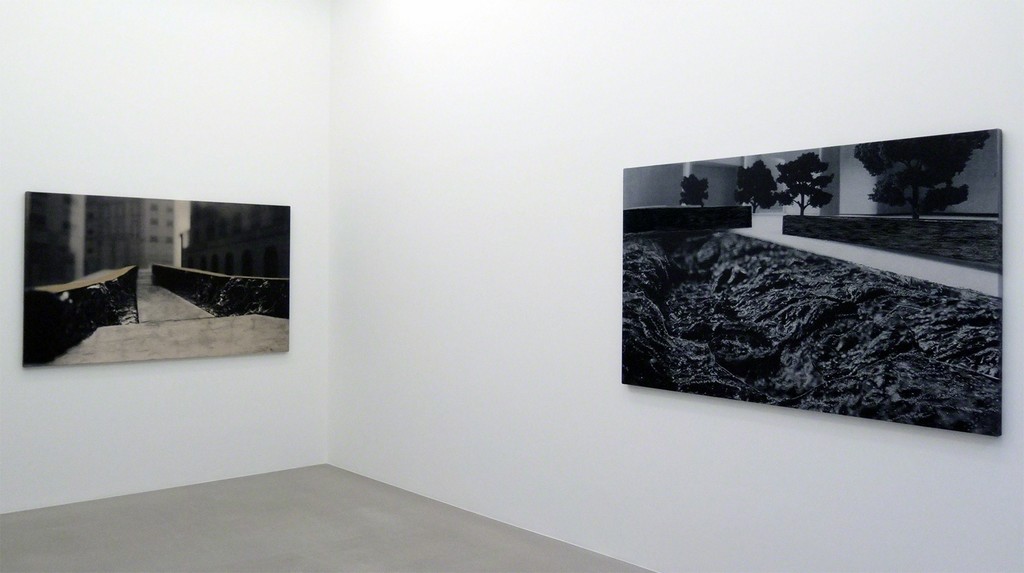 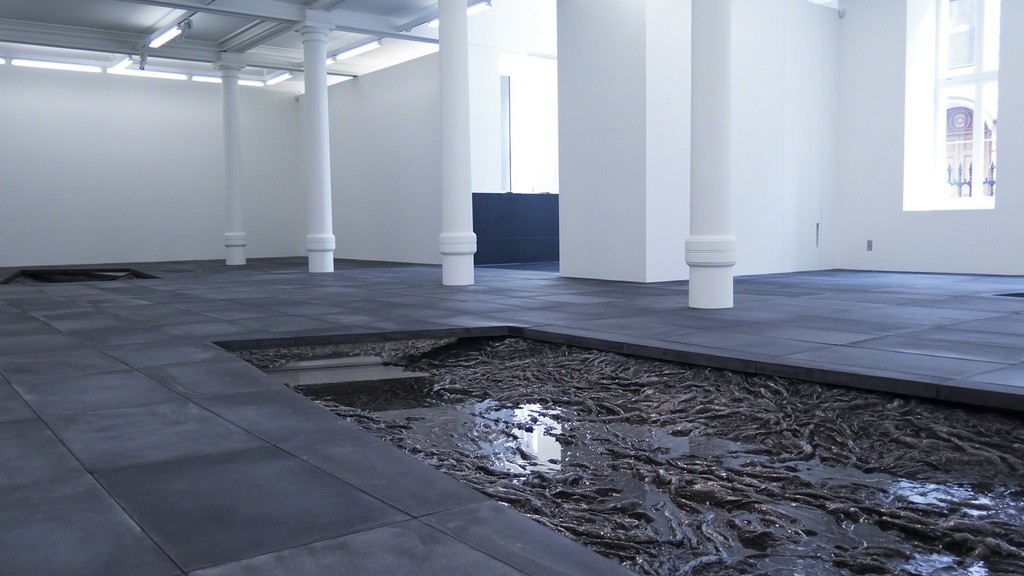 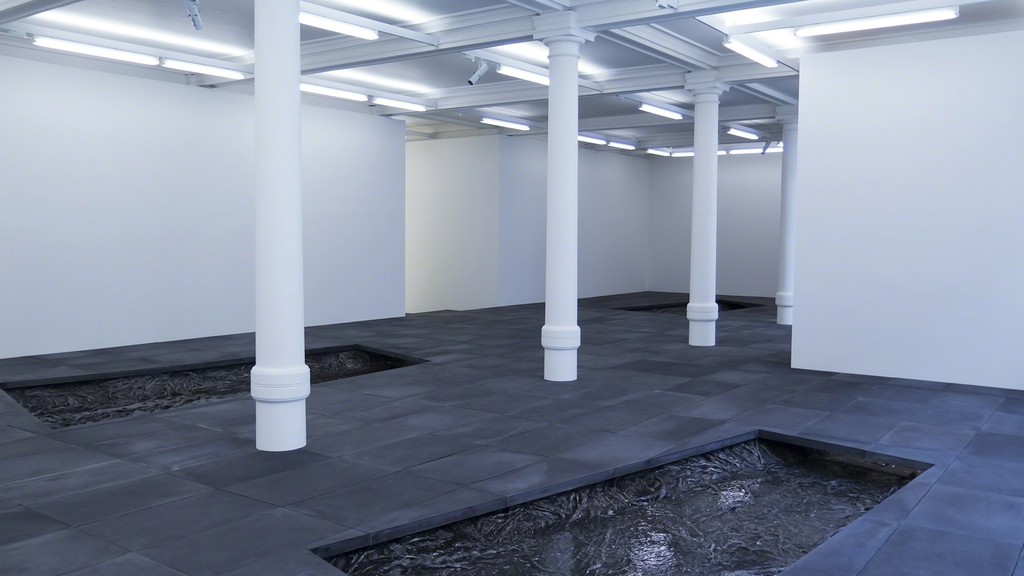 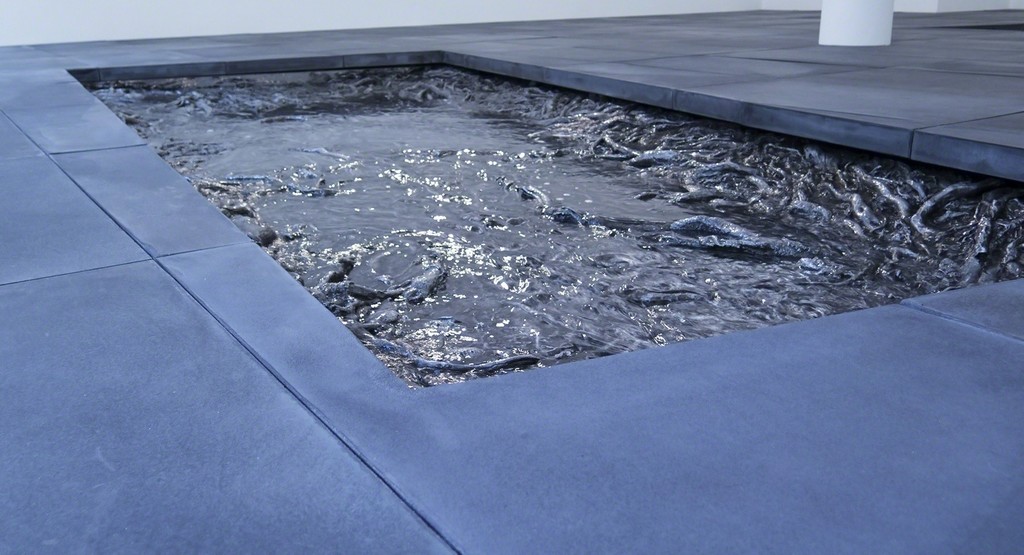 Marian Goodman is pleased to present an exhibition by Cristina Iglesias at 5-8 Lower John Street. This will be Iglesias’ first solo presentation in London since her 2003 exhibition at the Whitechapel Gallery. Iglesias will completely transform the London space through the installation of three sculptures with water in the ground floor gallery. From this first area, stairs descend to two adjacent side galleries. In one gallery we find a well with reflective interior walls that multiply the vision of an abstract, perhaps volcanic, mineral bottom. In the terrace gallery, one can contemplate fictional spaces of urban and natural piazzas, as represented in Iglesias’ two dimensional wall works.

Throughout her career, Iglesias has defined a unique sculptural vocabulary, building immersive and experiential environments that reference and unite architecture, literature and culturally site-specific influences. Through a language of architectural and natural forms rendered in resin, bronze, stainless steel and terra cotta, she poetically redefines any logical interpretation of space by confounding interior and exterior, organic and artifice.

In 1996, Iglesias was invited to build her first large-scale public work Deep Fountain, using water for the city of Antwerp which resulted in a dynamic, expansive well in the large public square in front of the Museum Voor Schone Kunsten. She has continued to explore the concepts of the underground through her ongoing Pozo pieces, making her first pozo in 2006. In these well sculptures, water runs in differently timed cycles, inviting the viewer to think about an unseen below, an undefined depth that both emanates and gathers the water. It is this idea of the underneath that has continuously interested the artist, and it is in that limitless space where Iglesias constructs. Most recently, in Toledo, Iglesias completed her largest public commission to date. Commissioned by Artangel and completed in 2014, Tres Aguas consists of three monumental works of architecture, sculpture and water that work in concert to bring the river Tagus back into the streets and life of Toledo.

The three waters of Tres Aguas are reflected in the gallery through the installation of three new fountains installed in the central gallery on the ground floor. With a raised, paved floor, Iglesias has created continuity with the exterior pavement leading to Golden Square. The fountains are lined with bas-reliefs organic forms, cast in aluminum, through which water ebbs, flows, gushes and drains in a carefully syncopated choreography of movement and sound that transforms the gallery into a sensory, alternate world where the constraints of architecture dissolve into landscape.

In contrast to the verticality of traditional sculpture, these fountains descend into underground microcosmic topographies that recall the banks of a river or the bottom of a lake, as it reveals fictitious undergrowth uncovered by the removal of a few paving stones. These casts of roots and branches recall living organisms that find nourishment in the flowing water. By bringing the city plaza into the gallery, Iglesias gives us a public site for contemplation and communion, while hinting at the pulsating, beating body of water barely concealed underneath. Just as Tres Aguas brought the river Tagus back to the city of Toledo, Phreatic Zones recalls the river Thames, ever-present in the history and life of London.

While Iglesias clearly does not indulge in Baroque spectacle and has taken the fountain tradition far beyond mere lavish ornament, her uses of water seem to me to resonate with the deeper implications of Descartes’ analogy, for the regular pulse of Tres Aguas evokes the mind-body symbiosis of every living organism as well as the reciprocity that needs to exist between nature and society, individual and community. The Toledo works – and other fountains and pools Iglesias has made – awaken a city’s inhabitants to the natural forces circulating under our feet and sustaining our existence.

The use of water changes our perception, not only of the topography of the gallery itself, but also of our experience of time spent with the work. Aluminium is used not just as a solitary sculptural material but also works in harmony with water and light to create an environment conducive to personal and communal introspection. Phreatic Zones exploits the duplicity of water as healing and scarring, cleansing and corrosive, calm and chaotic, and as vector for transformation.

The well, the crack, were always the most literal metaphor for the mysteries of the body and the land, allegories of life, of sex and of death, the earth’s crust as a geological scar on the universe the body and its most intimate mysteries are inscribed on. Body and landscape rush ahead in Cristina Iglesias’ work, in new incisions like the lines of a text.

Iglesias is currently working with Renzo Piano on a site-specific installation for the Fundación Botín in Spain and with Foster & Partners on a monumental commission. The series of silkscreens presented in the side gallery quote both of these projects as well as some unrealised projects. Here the issues of her sculptural studies conform images into silkscreens, onto which she then draws. The artist continuously creates pictorial works which form a very important discipline within her practice. Based on studies for her large-scale sculptures, they address perspective and turn an architectural object into an extension of the fictional places Iglesias constructs.

Iglesias has participated in a number of international exhibitions and public commissions and has represented Spain at the 1986 and 1993 Venice Biennales and at the Sydney Biennale in 2012. In addition to the recent exhibition ‘Impresiones’ at Museo Casa de la Moneda, Madrid and ‘Pozos’ at Bodegas Cune, Haro (2015), her work recently exhibited in ‘On Reality’ with Thomas Struth at the Ivorypress Space, Madrid, and in the enormous permanent public commission ‘Tres Aguas – a Project for Toledo’, Toledo, Spain (2014). Her numerous solo exhibitions include most recently the large retrospective ‘Metonimia’, at Museo Nacional Centro de Arte Reina Sofia, Madrid (2013), ‘A Place of Reflection’, Casa Franças, Rio de Janeiro (2013) as well as previous solo shows at Fondazione Arnaldo Pomodoro, Milan (2009), Ludwig Museum, Cologne (2006), Irish Museum of Modern Art, Dublin, Whitechapel Gallery, London (2003), Museu Serralves, Fundaçao Serralves, Oporto, (2002), Guggenheim New York (1997) and Guggenheim Bilbao (1999), among others. Iglesias has an upcoming solo show at the Musée de Grenoble (2016).