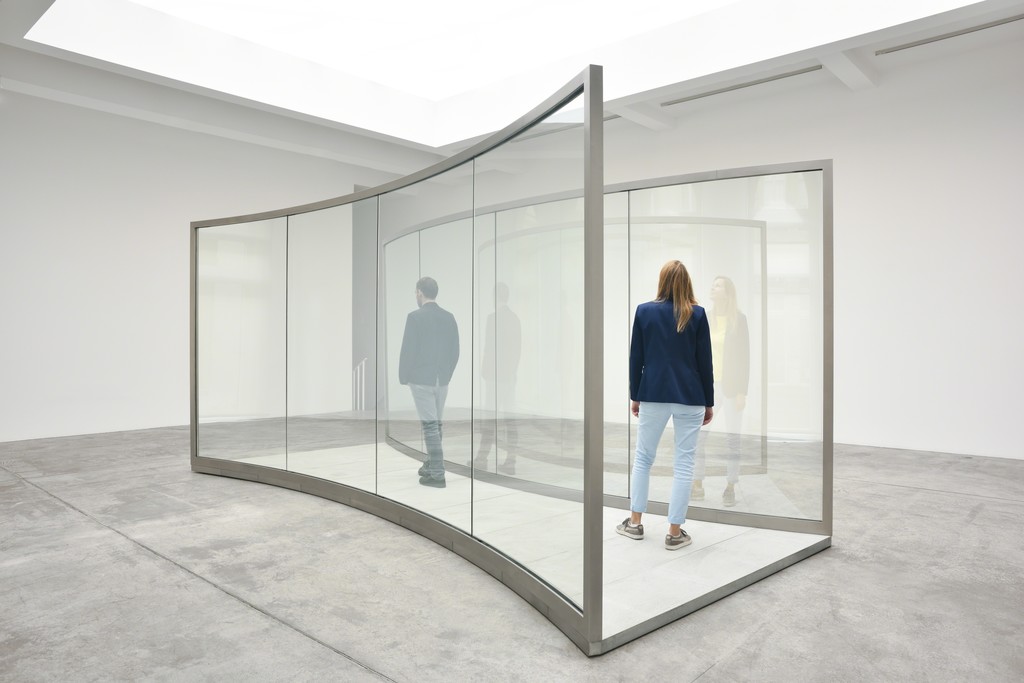 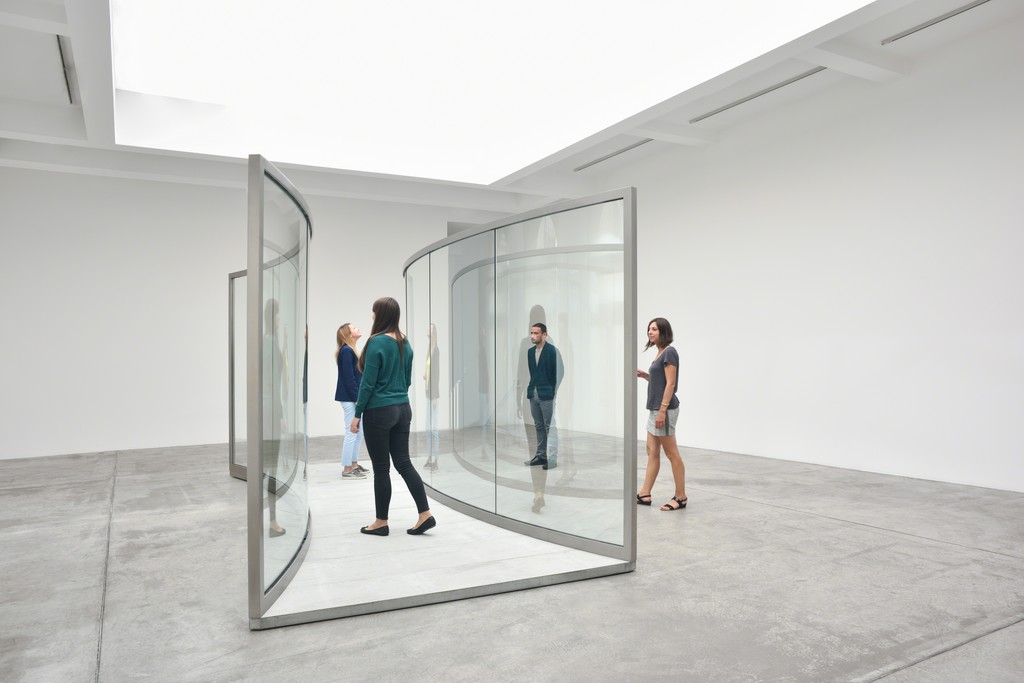 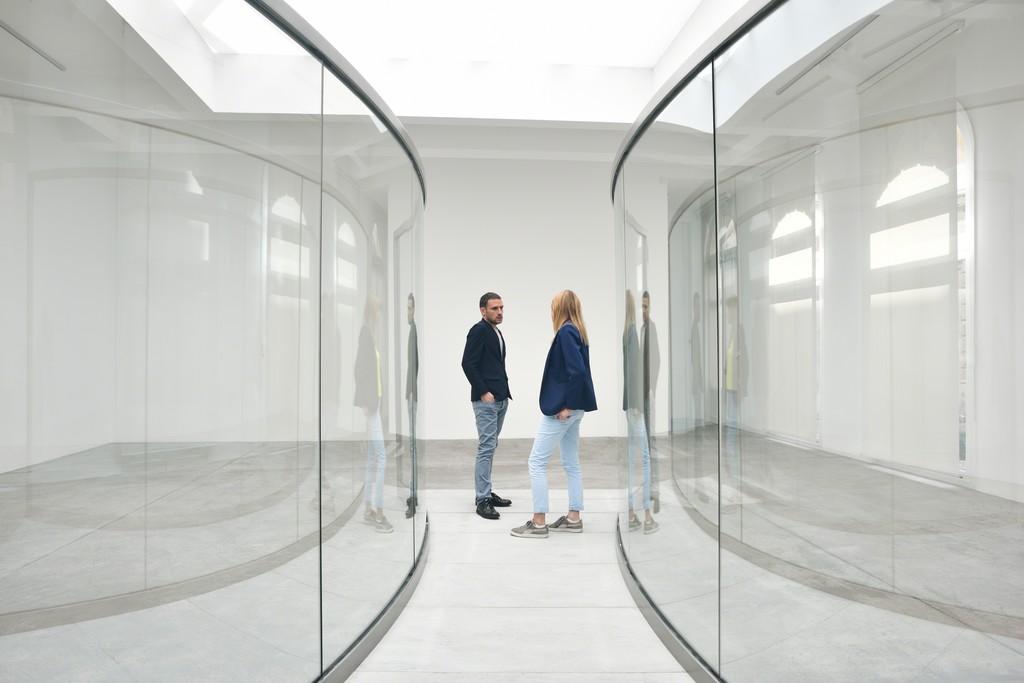 Marian Goodman Gallery Paris is pleased to announce the opening of an exhibition of works by Dan Graham on September 5. The exhibition is part of a number of events involving the artist which are taking place in France. A solo exhibition is currently on view on the rooftop of the Cité Radieuse in Marseille (MAMO), while the Place Vendôme in Paris is going to feature Graham’s work beginning on October 12.

A new pavilion (a hybrid structure, between architecture and sculpture) made of two curved screens of stainless steel and two-way mirrors is going to be featured at the ground floor of the gallery. Intended for a public space, without having a specific purpose, the work Passage Intime invites visitors to enter inside the concave gap between the two partitions. When two or more persons enter the passageway simultaneously, the narrow space induces brief physical contact.

“Passage Intime can be seen as either a Tunnel of Love or as frightening tight squeeze, a claustrophobic and uncomfortable spatial experience or an intimate body moment. The concave/convex sides of the "Passage" are two-way mirror glass, both of which are simultaneously reflective and transparent. People inside the "passage" see their gaze and body are anamorphically distorted and very close-up (like a bathroom make-up mirror). People outside see a convex anamorphically distorted mirror of their gaze and body. As they move the distortion changes. People inside see optically concave mirror distortions and people outside the passage experience each other's intersubjective gazes superimposed on each other. Their bodies, in motion, are super-imposed on each other. This "fun-house" experience perhaps evokes Lacan's "mirror stage" experienced first by the child's gaze in relation to the mother's gaze.” Dan Graham, 2015

Each pavilion designed by Dan Graham possesses a unity of form and mise-en-scène, which makes the visitor a necessary agent in the production of the work. Since the late 1970s Dan Graham has created, for gardens or urban contexts, several dozen similar pavilions which sometimes exist only as architectural models. The sources of their inspiration vary: Renaissance pavilions, 18th-century English gardens, 19th-century follies, temporary exhibition pavilions, conceptual and minimal art… The adoption of architectural vocabulary, a staple element in Graham’s work, is a way of emphasizing how our environment fundamentally structures our gaze.

An integral part of the pavilions, the two-way mirror brings to mind office buildings built since the 1970s which allow light to enter the structure while protecting the privacy of those inside. In addition to the multifold play of reflection and reflexivity, this type of glass also makes us aware of the immediate past —a key notion in Graham’s work which he borrowed from Walter Benjamin and began exploring in the early 1970s through a variety of video-performances.

The exhibition also includes the screening of Don’t Trust Anyone Over Thirty, a rock opera conceived and staged by Dan Graham. Never before shown in France, this satirical performance weds rock’n’roll music and puppet show. It was created in 2004 in collaboration with the puppeteer Phillip Huber, the set designer Laurent Bergen, and set to live music by Japanther. Rodney Graham composed the theme song and Tony Oursler designed the video projections.

Like the pavilion series, this work (already shown at the Venice Festival, at the Staatsopera in Berlin, and at the Walker Art Center in Minneapolis) combines references as numerous as they are eclectic: from the cinema of Billy Wilder to the rock culture of the 1960s and 1970s, to which Dan Graham had devoted a documentary film ( Rock My Religion) in the early 1980s.

“What Don’t Trust Anyone Over Thirty emphasizes through the use of theater is Graham’s complex relationship with the notion of entertainment and representation. It actually weaves together in a spectacle much of the critical content of Graham’s career. And as a spectacle, its contents is pure fun, pure superfluous pleasure.” Philippe Vergne in Don’t Trust Anybody in Dan Graham: Beyond, The MIT Press, 2009.

Dan Graham was born in 1942 in Illinois and grew up in New Jersey. He now lives and works in New York. An unclassifiable and self-taught artist, erudite and bibliophile, he is also an art critic and theorist. A large retrospective of his work was shown in 2009 at MoCA in Los Angeles, at the Whitney Museum, and at the Walker Art Center. In 2014, he was invited by the New York Metropolitan Museum to participate in The Roof Garden Commission, whereas the Dutch De Pont Foundation presented the exhibition Models and Beyond.

At the moment, two pavilions ( Two Nodes and Tight Squeeze) are being exhibited on the rooftop of the Cité Radieuse de Le Corbusier (MAMO) in Marseille. From October 12 to November 12, Two Nodes and Passage Intime will be installed at the Place Vendôme in Paris. The artist has deliberately positioned the pavilions in places which allow for interactions with passersby.

Marian Goodman has long cited a deep love for Paris as the impetus for opening her first European gallery here in 1995. On the occasion of the twentieth anniversary of the Paris gallery, Marian Goodman has invited Christian Boltanski to present his latest work. The exhibition Faire-part will be held from October 22 to December 19, 2015, and the opening will take place during FIAC (Paris International art fair). This will be a highly anticipated show as Christian Boltanski is generally considered France’s most famous living artist, but he hasn’t actually had a solo show in Paris since 2010.