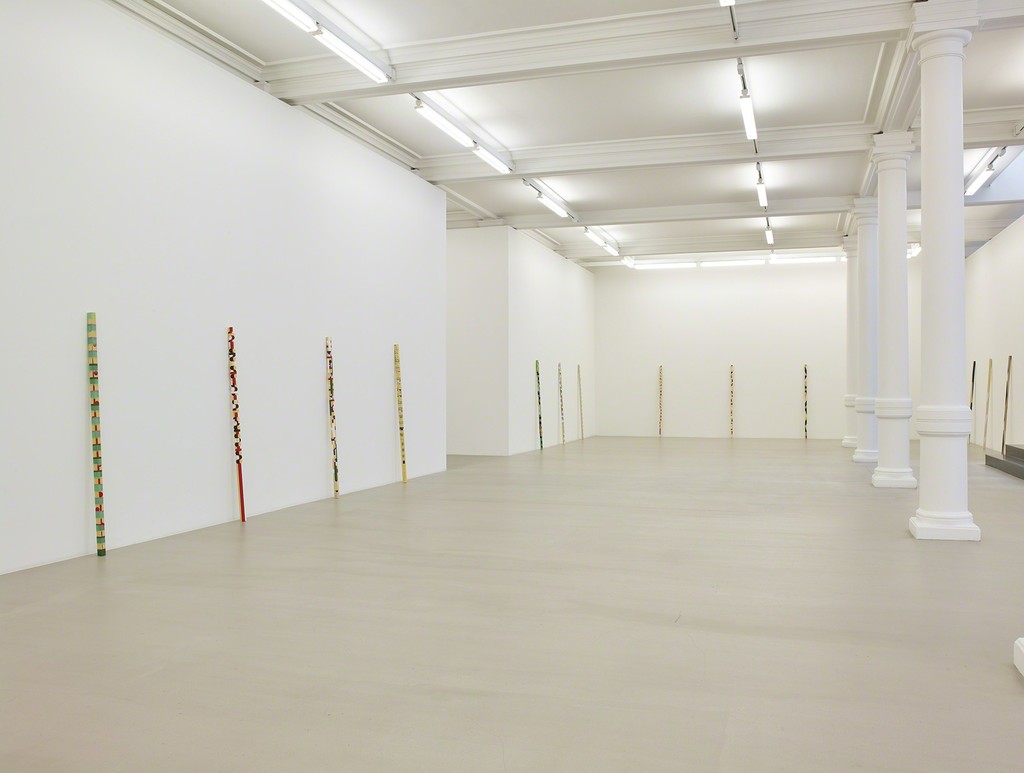 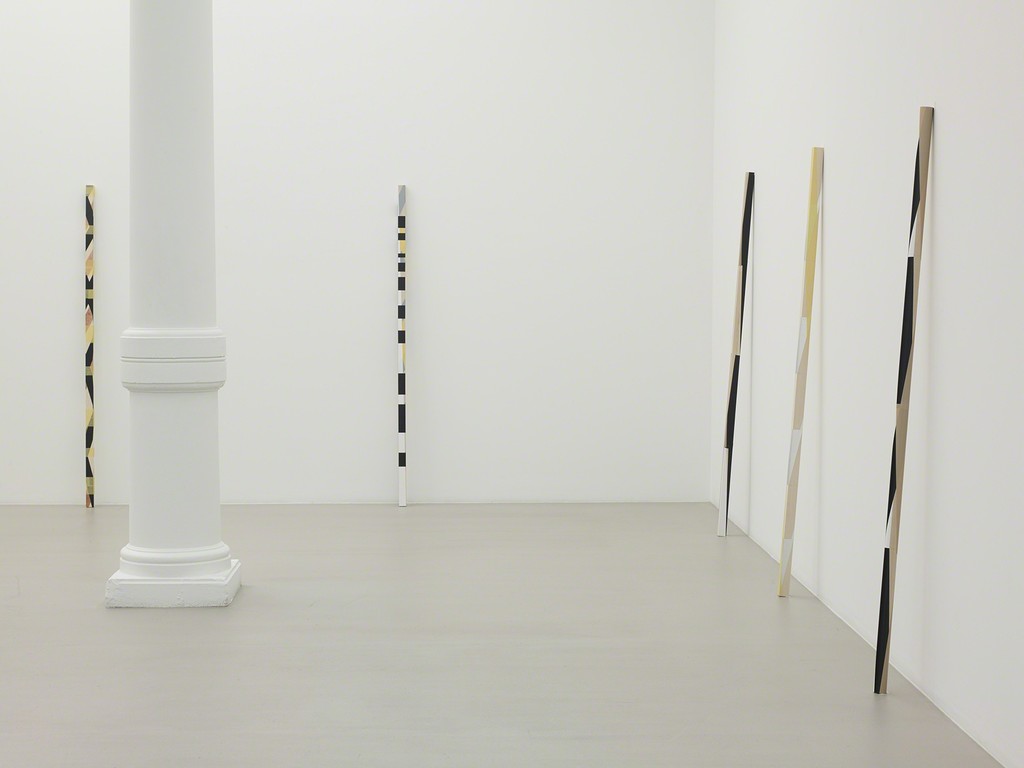 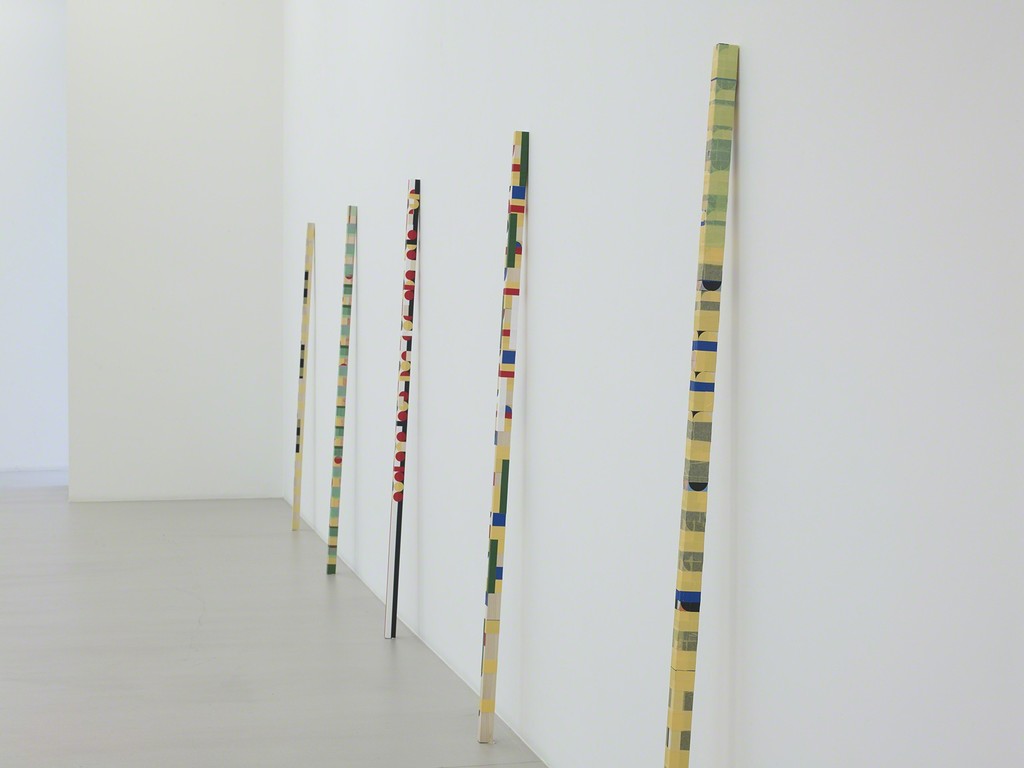 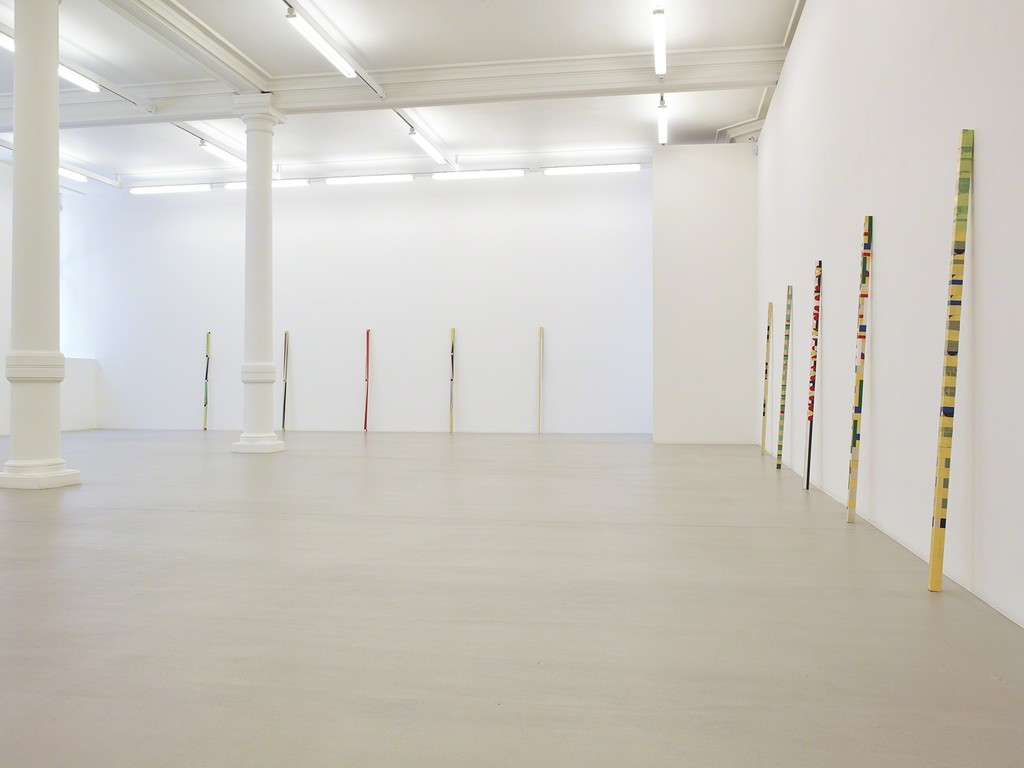 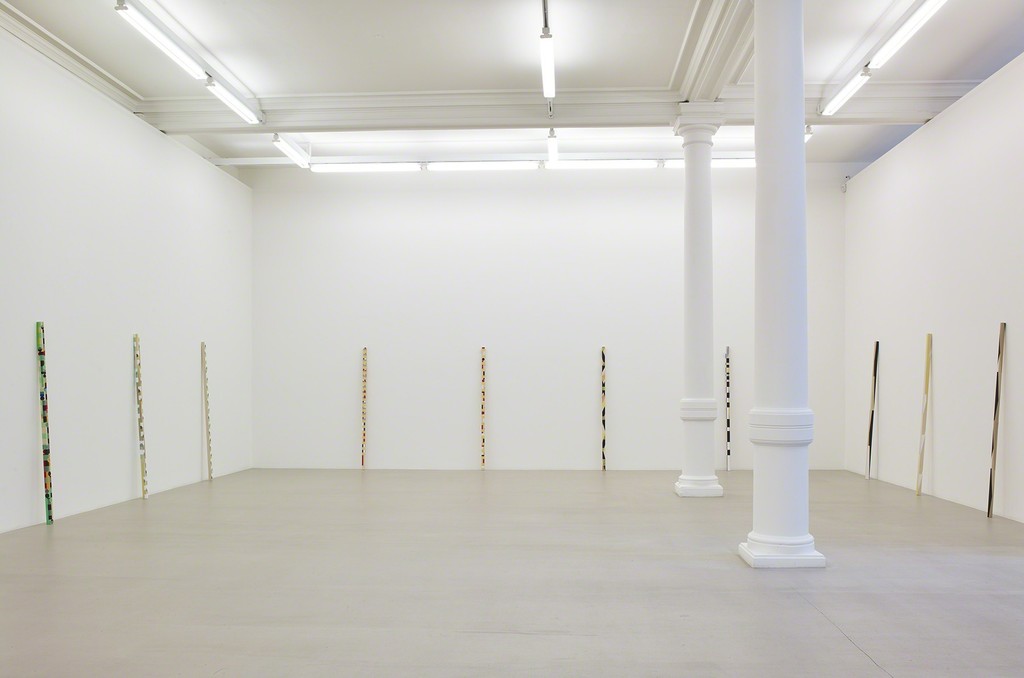 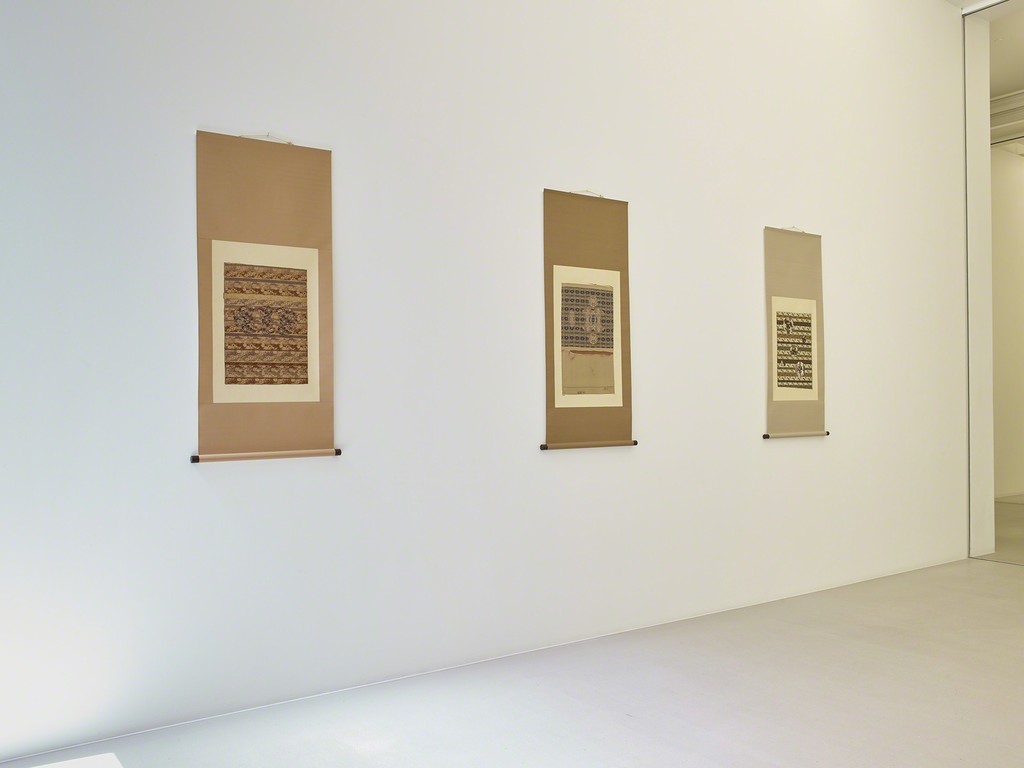 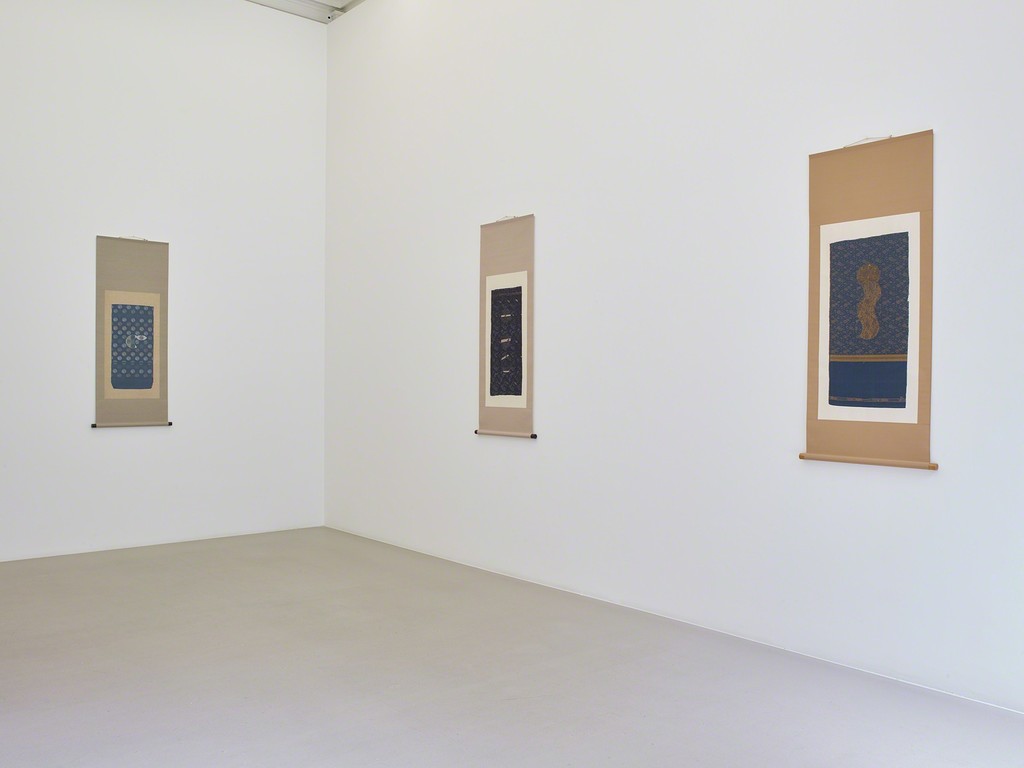 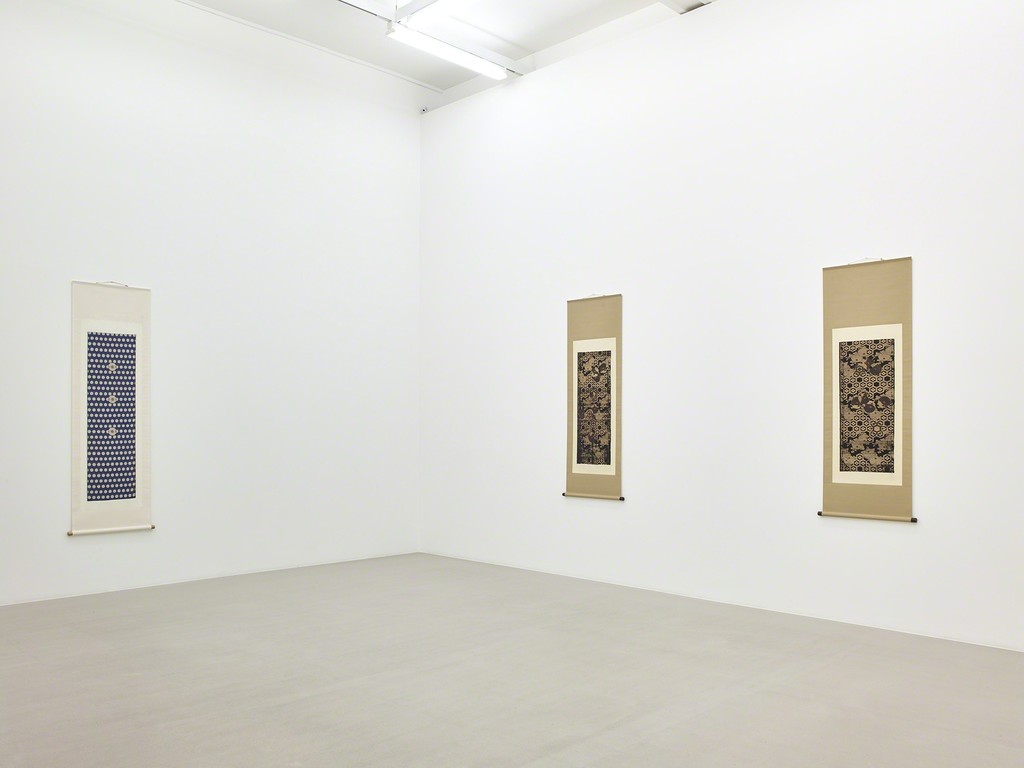 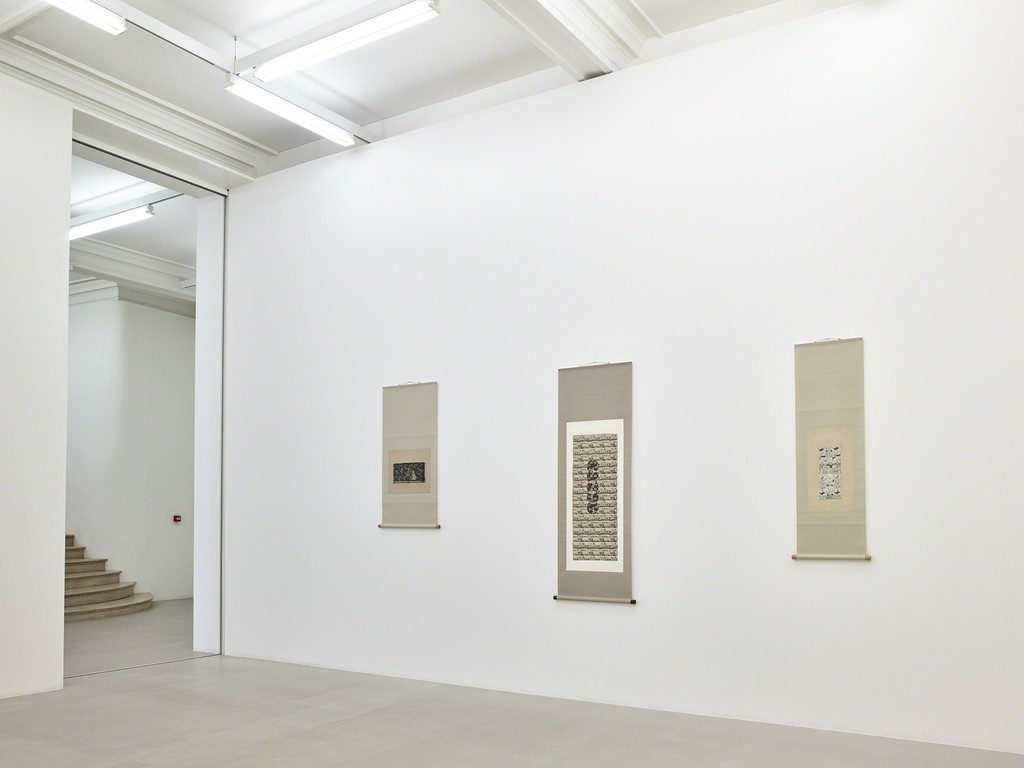 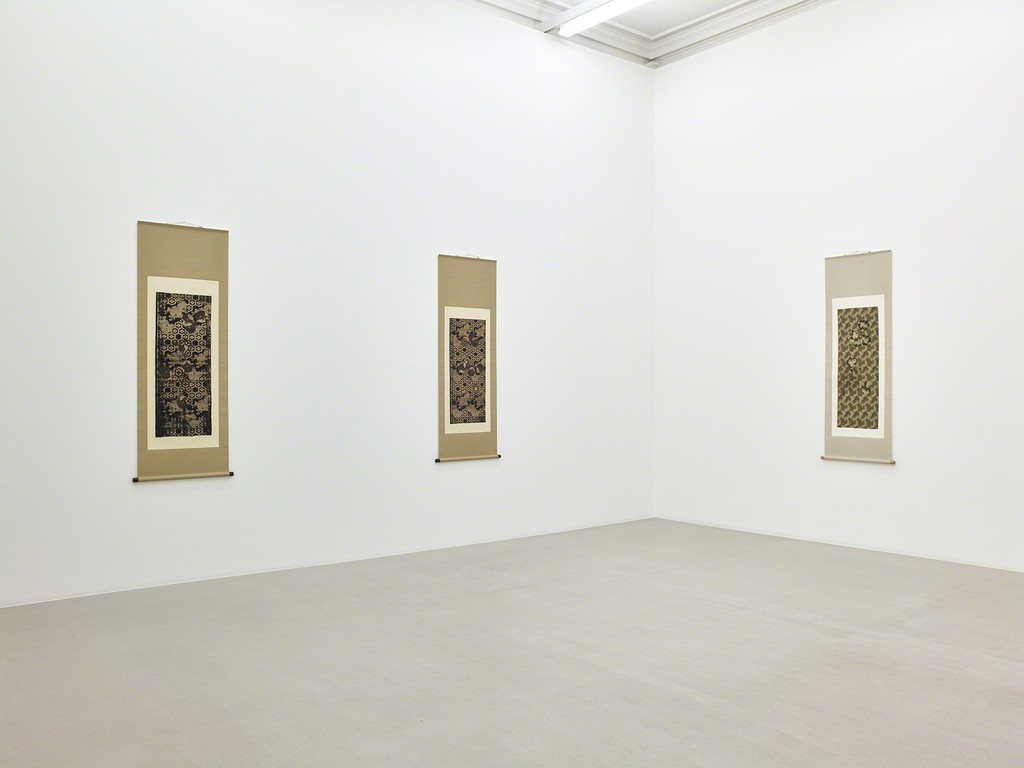 Marian Goodman is pleased to announce an exhibition of new work by Gabriel Orozco at the London gallery, his first in the city since the 2011 retrospective at Tate Modern. He will present new paintings, scrolls, sculptures, drawings and photographs made over the last year in Japan and Mexico.

The exhibition will be accompanied by a newly commissioned text, entitled Wrappings, by Briony Fer, who will also lead an informal discussion on Orozco’s work and the exhibition at the gallery on Saturday, 13 June.

The itinerant nature of Gabriel Orozco’s practice has been a defining characteristic of his career, providing him with inspiration through travel and immersion in foreign cultures. In 2015 he took up residence in Japan where the majority of this exhibition was created, including a series of 28 collages on traditional scrolls.

The scrolls are displayed both on the gallery walls and in their own individual wooden presentation boxes. While the compositions are characteristic of Orozco’s complex formal experiments with interlocking circles, here they are constructed from appropriated swatches of traditional Japanese silks.

‘Against this preoccupation with emptiness, the recent collages that Orozco has made out of antique textiles would seem to veer abruptly away into mere material stuff. They are made out of the often intricately woven fabrics used for the sashes or obi traditionally wrapped around the waist of the kimono in traditional Japanese dress. Now the cutting out and splicing is actual, as Orozco has used a circular cutter to take circles out of the fabric and flip them to show the reverse as well as the good side of the weave.’ (Briony Fer, Wrappings, 2015)

The circular motifs explored in these scrolls have been the subject of Orozco’s paintings since his first Samurai paintings made a decade ago. In his most recent paintings here, a mechanized spirographic repetition of a circular grid populates the canvas. Orozco chose which intersections of these circles to paint or gild, and which to be left blank, creating a plane of dispersed and deconstructing circles with captured interlocking sections. Briony Fer suggests that Orozco´s circular drawings and paintings exemplify ‘the twin action in his work, a ruination of center and an infinite dispersal of its elements.’ (Briony Fer, Spirograph: The Circular Ruins of Drawing, 2004)

Experimenting with and altering found objects, Orozco crosses fluidly and fluently between varying modes of production. Something else that grew from his time spent in Japan are a series of wooden totemic sculptures made from drawing, painting and collaging found local materials. Made of components that are ubiquitously Japanese, comprised of the packaging material and other detritus of urban Tokyo, they are placed leaning against the walls and columns of the gallery space at varying intervals and heights.

‘Orozco’s working method involves making a few basic decisions about his materials and process which then allow him to avoid or at least minimize making the kinds of choices usually deemed ‘’aesthetic’’. …he has consistently worked in this way, applying self-imposed limits at the same time as allowing the work to be open to the possibilities of chance and contingencies of place.’ (Briony Fer, Wrappings, 2015)

Orozco appropriates materials that had an original and specific functionality, objects that have their own set of rules and criteria which he deconstructs, reassembling them according to his own process and decisions. In speaking about his use of found materials, Orozco has stated:

‘It is important to understand where these materials came from, what they were designed for and how I try to give their intrinsic structure a new way of functioning, metaphoric on the one hand, but also utilitarian and in some way real. To continue and extend the possibilities of the historical and mythic content of those objects and not just their mechanical structure.’ (Gabriel Orozco, Lecture, January 30, 2001, Rufino Tamayo, Mexico City)

Orozco has commented that his starting point is an awareness of the self at the centre of the action, ‘an individual interacting with reality, the self in a specific situation in dialogue with another culture, with a specific object that always belongs to a political sphere and to a social instrument’ (Gabriel Orozco, Museum of Contemporary Art, Tokyo, 2014). In the exploration of this we find the circular, spiral motif as a recurring, essential entity for Orozco, since the beginning of his practice.

Finding inspiration in the urban environment and domestic objects as well as the human body and nature, Orozco makes visible the poetry of serendipity. For him, photography has been a constant mediator of his nomadic lifestyle. His photographs balance the diaristic tone of an artist’s notebook with an intense study of the world around him. Working with his iPhone allows Orozco the freedom to capture the beauty of a fleeting moment, chance encounter or spontaneous intervention into the landscape.

Gabriel Orozco was born in 1962 in Veracruz, Mexico. He lives and works between Paris, New York and Mexico City. Recent solo exhibitions include Museum of Contemporary Art Tokyo, Japan (2015) Fleurs fantômes, commissioned by the Centre Region at Domaine de Chaumont-sur-Loire, Loire, France (2014-15); Gabriel Orozco: Natural Motion at the Kunsthaus Bregenz, Austria (2013) which travelled to the Moderna Museet, Sweden (2014); Thinking in Circles, at the Fruitmarket Gallery, Edinburgh (2013); and Asterisms, at the Deutsche Guggenheim, Berlin and the Guggenheim, New York (2012). From 2009-2011 a retrospective of the artist’s work traveled from the Museum of Modern Art, New York to the Centre Pompidou, Paris, the Kunstmuseum Basel, Switzerland and Tate Modern, London. Orozco’s first London solo exhibition took place at the Institute of Contemporary Art, London (1996).

The gallery is open Tuesday to Saturday from 10am to 6pm. For more information please contact Martin Richard Coppell at (0) 207 7099 0088 or [email protected]