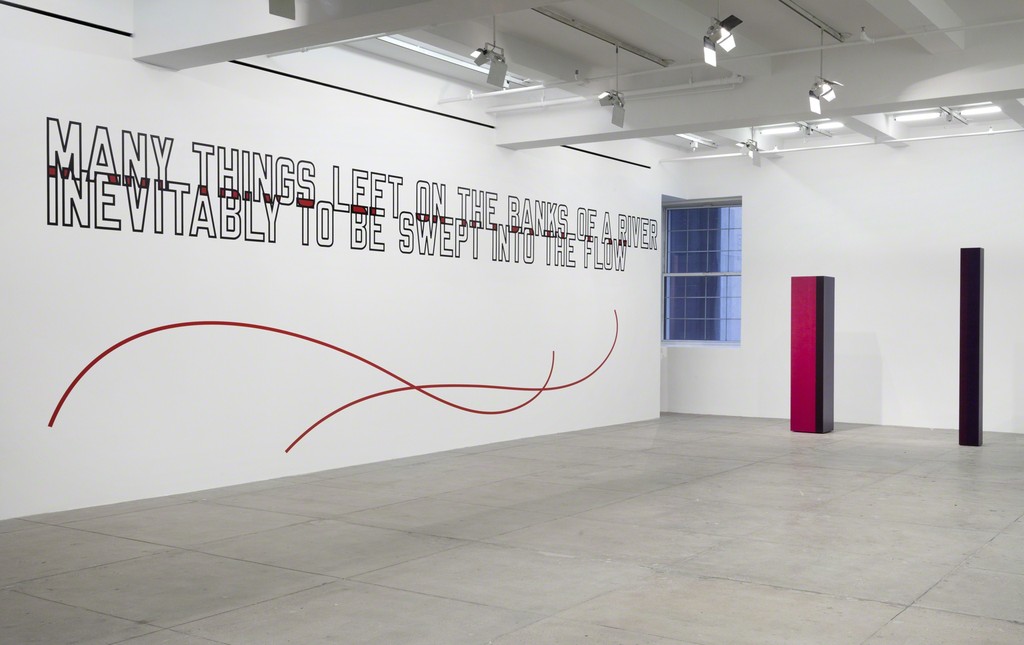 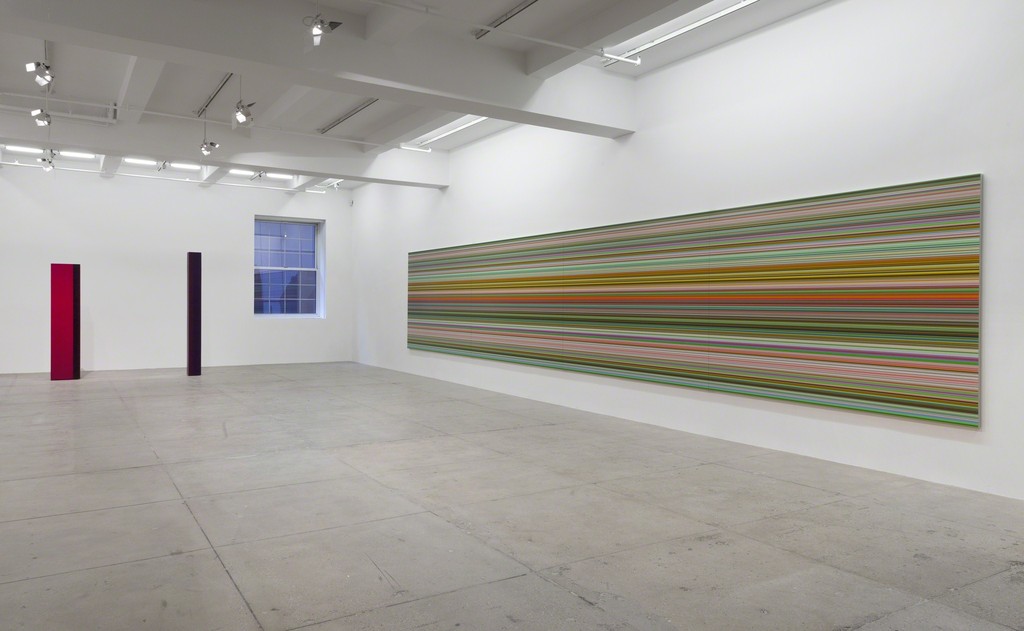 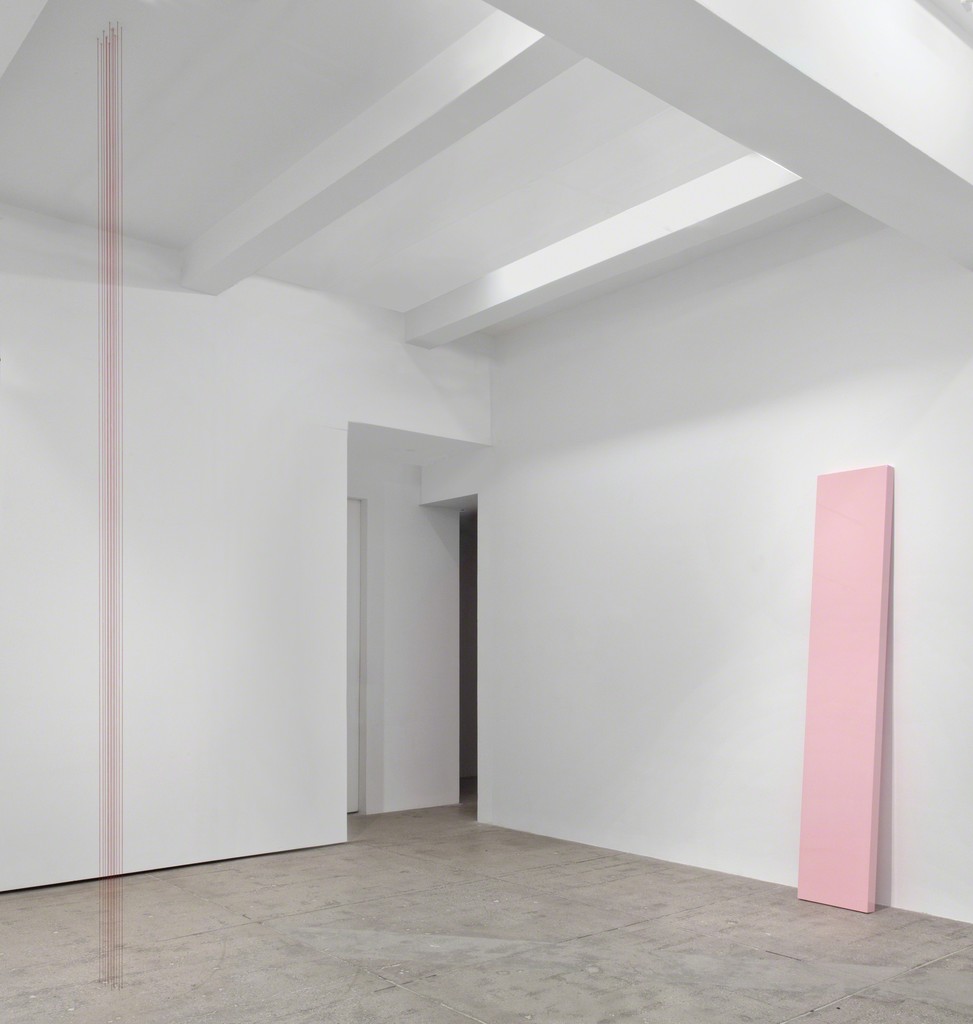 The exhibition will bring together important figures, who first emerged in the 60’s and 70’s and variously shaped the course of history for decades to come, engaging questions about painting and sculpture, drawing and photography.

On view in the North gallery will be a new 11 meter long Strip painting by Gerhard Richter, the culmination of a series of works the artist embarked on five years ago while working on his touring retrospective. The Strips continue Gerhard Richter’s over 60-year long investigation into the possibilities of painting which started through the means of photography. Appropriately, in the 21st Century, the initial tools are digital, however the starting and end points are insistently painterly. As Benjamin Buchloh writes ‘Richter's astonishing new works open a new horizon of questions. These might concern the present functions of any pictorial project that does not want to operate in regression to painting's past, but that wants to confront the destruction of painterly experiences with the very practice of painting as radical opposition to technology's totalizing claims.’ The specific point of departure is Richter’s Abstract Painting 724-4 from1990. Using his painting as template Richter achieves, with the help of software, a complex system of rules for a new game of chance which imposes on the painting an extreme vertical fracturing of the space. As his plan develops a life of its own, it generates a process of mirroring, repetition and multiplication of ever more reduced sections, until finally a display of more than 4000 patterns are formed, as if the digital process had now assumed the role of sorcerer. The final steps of this journey of chance produce a focused distillation of these patterns into an ever more linear pictorial plane of 8,190 refined striations, but one of inchoate color and rhythmic alignments. It is here at the end of this digital process that the artist can choose to impose his will on these dissonant relationships, this raw material, in order to create from all this his richly harmonious Strip Paintings. As Robert Storr puts it, ‘There has never been a body of work more “retinal” than Richter’s strip abstractions of the past several years. . .’

On the opposite wall will be Lawrence Weiner’s MANY THINGS LEFT ON THE BANKS OF ARIVER INEVITABLY TO BE SWEPT INTO THE FLOW, evoking a very different horizontal image. Known for his sculptures of ‘language + materials referred to’ and his commitment to making his work accessible to the public in diverse forms and situations, Lawrence Weiner has often defined his art as ‘the relationship of human beings to objects and objects to objects in relation to human beings.’ As Ann Goldstein writes in the 2007 retrospective catalogue (MoCA, LA and The Whitney, NY): “How a work is used by society is of critical significance to Weiner … [his] employment of language allows the work to be used by its receiver. It is purposely left open for translation, transference, and transformation; each time the work is made, it is made anew. Not fixed in time and place, every manifestation and point of reception is different – each person will use the work differently and find a different relationship to its content’.

Sol LeWitt’s Wall Drawing #459 Asymmetrical Pyramid with Color ink washes superimposed from 1985 is one of 1200 wall drawings the artist conceived since 1968 when he first extricated his work from the confines of the frame and transferred it directly to the wall. Regarded as one of the leading exponents of conceptual and minimal art, LeWitt emphasized the creative idea that generates a work. ‘For each work of art that becomes physical, ’ he wrote, ‘there are many variations that do not.’ Executed in dozens of layers of delicate ink washes in yellow, red, blue and gray, Wall Drawing #459 dates from after the artist’s move to Spoleto, Italy, where he studied frescoes of the Trecento and Quattrocento. As he said at the time, he wanted ‘to produce something [that he] would not be ashamed to show Giotto.’

Initially championed by Clement Greenberg and associated with Color Field painting and minimalist sculpture, Anne Truitt’s work ultimately eluded simple categorization. Started in 1962, her totemic pillars, two of which, Toth, 1983 and Quipe, 1984 are included in this exhibition, occupied the artist for the rest of her life. Her working process involved a labor-intensive technique of straining paint, applying it in thin layers, and sanding it to rid if of brush marks - a cycle she repeated over weeks and months. ‘I knew this work looked odd,’ she wrote, ‘the sculptures had become what I have been making ever since: proportions of structural form counter-pointed by proportions of metaphorical color – essentially paintings in three dimensions.’

On view in the adjacent gallery, is one of John McCracken seminal Planks, a body of work begun in 1966 and described by the artist as his personal ‘eureka’. ‘I see the plank as existing between two worlds,’ McCracken has said, ‘the floor representing the physical world of standing objects, trees, cars, buildings, human bodies, and everything, and the wall representing the world of the imagination, illusionistic painting space, human mental space, and all that.’ Long considered an exponent of “LA Minimalism”, McCracken’s mysterious, perfectly smooth, yet entirely handmade works have also been allowed to carry some of the escalating consciousness he ascribed them. As Linda Norden points out: “His was an art predicated on an acknowledgement of all that remains beyond comprehension”.

In contrast, Fred Sandback wanted to focus on the immediacy of the viewer's perception of the here and now, to avoid directing the imagination toward anything not immediately present. Untitled from1967 is one of the artist’s earliest sculptures, still made out of elastic cord that would soon be replaced by his signature-style acrylic yarn. For over 40 years, Sandback would persist in using this simplest of means to create subtly complex perceptual effects. This paradoxical play with material fact and perceptual illusion was ultimately taking place in the ‘pedestrian space,’ as Sandback called it, of everyday life.

Please join us at the opening reception on Wednesday, June 24th, from 6-8 pm.