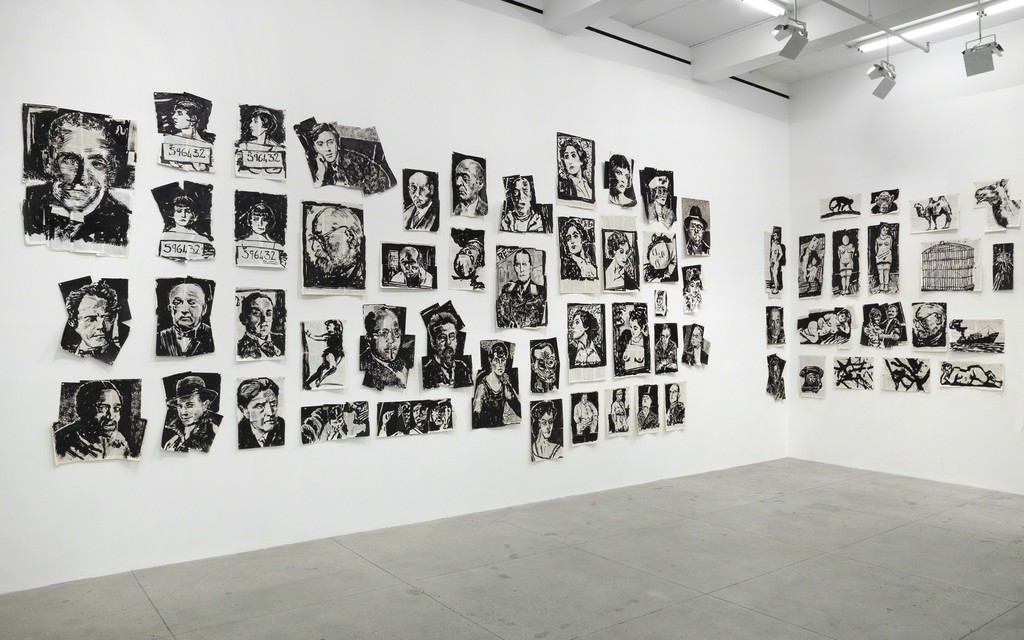 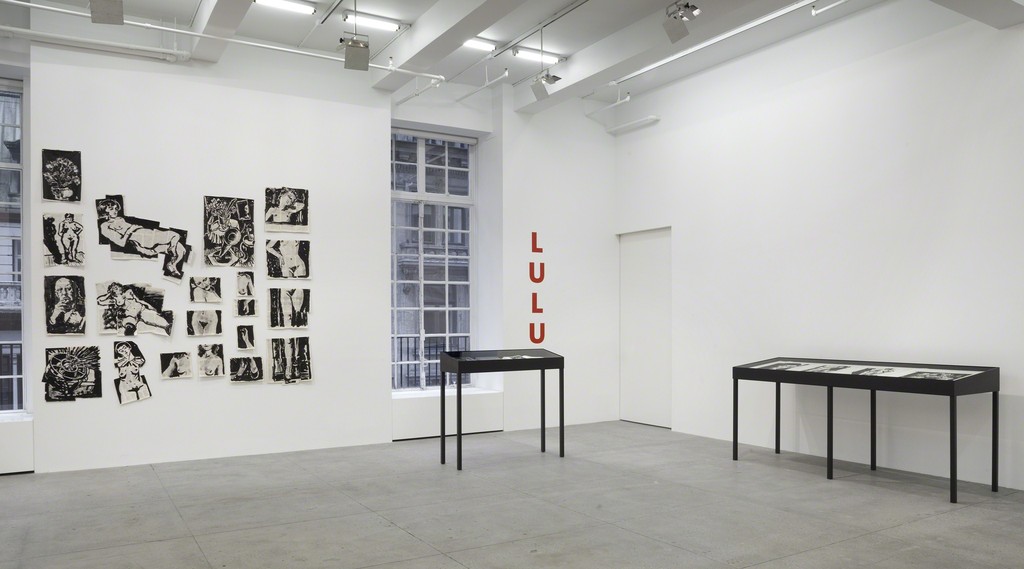 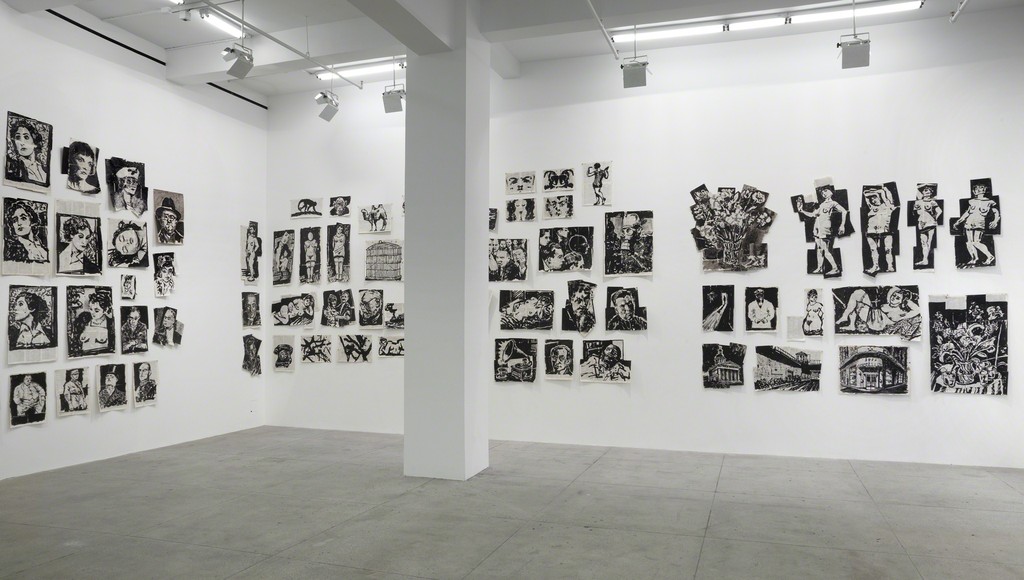 Marian Goodman Gallery is pleased to announce an exhibition of new Drawings for Lulu by William Kentridge and a suite of linocut prints specially created for THE LULU PLAYS, a limited edition artist book published by Arion Press in 2015 which will be on view in our Third Floor Project Space.

The exhibition opens on Monday, November 2nd and runs through December 19th. The drawings are shown on the occasion of the publication and on the occasion of the presentation of Alban Berg’s opera, Lulu, with direction and staging by William Kentridge, premiering at The Metropolitan Opera, New York on Thursday, November 5th. Kentridge’s production of Lulu, sung in German, is conducted by Lothar Koenigs with musical direction by James Levine. There will be eight performances, through December 3rd. This is a co-production with the Dutch National Opera and the English National Opera.

Presenting the original 67 illustrations by William Kentridge for a limited edition book from Arion Press, adapted from hundreds of drawings Kentridge made to be projected on the stage of the opera, of which 120 are currently on exhibit, the gallery exhibition also includes the book and a suite of four linocut prints signed by the artist. This original material for the book and opera underscores the artist’s inspiration from silent films of the 1920s and 30s, the time in which Lulu was composed.

As William notes, “the drawings, made with brush and ink on dictionary pages between 2011 and 2015, were created for use in the production of the opera. The physicality of ink – black ink, ink as blood, the harsh lines and clarity of images corresponding to the ruthless world, becomes an aesthetic equivalent of the instability of desire, a central construct in the Lulu opera. Lulu is both less and more than she wants to be, and more and less than her suitors imagine her to be. As such, she is often represented in a fractured formation in the drawings; constructed on multiple sheets; created to deconstruct and to fall apart. As femme fatale, she exists in many forms and there are myriad women representing her. The images used in the opera production span the period of the plays at the turn of the twentieth century to the opera in the early 1930s. Amongst the images are translations from Beckmann, Kirchner, Klimt, Nolde, Kollwitz, as well as images from documentary and the fictional films of the period.”

Featured in the book The Lulu Plays are original plays by Frank Wedekind –Earth-Spirit and Pandora’s Box-- on which the opera’s libretto was based, giving us a rare chance to become acquainted with the literary origins of the opera. These two plays from the turn of the last century changed the course of drama, not just in Germany but worldwide, and have had a profound effect on film and opera as well.

Master printer Andrew Hoyem who worked with Kentridge to establish the sequence of the 67 images in The Lulu Plays through the front matter, the first play, Earth-Spirit, with its prologue and four acts, then the Entr’acte between the two plays, and the second play, Pandora’s Box, in three acts, explains: “The sequence begins with portraits of Wedekind, Berg, and Schoenberg, then follows the story line of the drama. The prints show the influence of films from the 1920s and 1930s, as Kentridge acknowledges above. Also, he has used existing photographs and artworks as sources for his portraits of Wedekind’s characters. As a conceit, he has used historical figures to represent certain characters, such as having the young Alban Berg play the son of Dr. Schön, Alva; Gustav Mahler play the Count Casti-Piani, a high-class pimp; Richard Strauss play the banker Puntschu; and Sigmund Freud play the Stage Manager, who, has no speaking lines in the play. The soprano singing the role of Lulu in the Metropolitan production, Marlis Petersen, whose hair is in the style of Louise Brooks, is portrayed in some of the depictions of the Lulu character in the book. To warn the reader of the violence in the plays, the endpapers evoke spatterings of blood.

“An entr’acte section, separates the two plays, because Alban Berg wrote into his libretto that the opera should have a film sequence at its mid-section, showing Lulu’s arrest, trial, and incarceration, then her escape engineered by the Countess Geschwitz. The cinema director Heinz Ruckert shot a silent film to the composer’s specifications. The original film has been lost, so subsequent productions have had new
movies made to comply with the composer’s wishes.”

The Opera. Alban Berg’s Lulu (1937 / 1979) is a masterpiece of twentieth-century opera. The Austrian composer Berg (1885 –1935) began to teach himself music when he was fifteen and later studied with Arnold Schoenberg for six years. In 1905, at the age of twenty, he had seen a production of Wedekind’s Pandora’s Box, staged in Vienna by his friend Karl Kraus, and determined to create an opera version. But work on his other opera, Wozzeck, intervened, as well as instrumental, orchestral, and vocal pieces, so he did not begin his Lulu until 1929. The opera was left uncompleted at his death in 1935, although he had finished the third act in particell format (short score). His wife Helene Berg forbade completion of the final act and allowed only performances of the first two. But after Helene’s death, the opera was completed by Friedrich Cerha and premiered in 1979 in Paris, conducted by Pierre Boulez. Berg himself had written the libretto, which was very faithful to the two Wedekind plays, even down to constructing the scenes in the three-act opera to follow the seven acts in the two plays. As a composer, Berg was influenced by his teacher Schoenberg’s twelve-tone technique and by his theory of developing variation. They were lifelong friends, and Berg dedicated Lulu to Arnold Schoenberg in honor of his sixtieth birthday,

The Plays. Benjamin Franklin Wedekind (1864 –1918) was conceived in San Francisco and born in Hanover, Germany, to a Swiss mother and a German father, and grew up in a Swiss castle. He lived in Munich most of his adult life. He claimed American citizenship until the First World War, when he was required to have a German passport. Initially, he worked in business, then in the circus, and became an actor and singer. He starred in satirical cabaret and began to write for the theater. At age 34 he became a dramaturg at the Munich Schauspielhaus. Wedekind died at the age of 53. The “Lulu” plays, Erdgeist / Earth-Spirit and Die Büchse der Pandora /Pandora’s Box, published in 1895 and 1904, respectively, followed this first major play, Frühlingserwachen / Spring’s Awakening (1891).

“In 1929, the silent film director G. W. Pabst released Pandora’s Box, starring Louise Brooks as Lulu, which continues to be regarded as a great classic of the cinema. In the film adaptation many details were changed, but the main story line was faithful to the Wedekind plays.

“The Arion Press publication honors the artistry of Frank Wedekind, a celebrated radical who was censored, banned, and even jailed for his stage expressions against conventional behavior, although he aspired personally to upper-class respectability. His borrowings from circus, pantomime, vaudeville, and Grand-Guignol aimed to give pleasure and immediacy on stage rather than a distanced literary satisfaction. An accomplished actor, Wedekind would demonstrate, when directing, a harshly stylized technique of disjointed actions and puppet-like movements, using, according to Berthold Brecht, his “metallic, hard, dry voice” in a riveting manner. He influenced Expressionism, Dadaism, and the Theaters of Cruelty and the Absurd. In Brecht’s estimation, Wedekind “belonged with Tolstoy and Strindberg among the great educators of the new Europe”.
Arion Press, 2015

William Kentridge was born in 1955 in Johannesburg, where he currently lives and works. His work has been exhibited widely throughout the world. Most recently Notes Towards a Model Opera was presented at the Ullens Center in Beijing, China (2015). At the end of the year this show will travel to The National Museum of Modern and Contemporary Art, Seoul where it will be presented as Peripheral Thinking. A major traveling exhibition, Fortuna, has been touring South and Central America since 2012 and is currently at the Museo Ampara, Puebla, Mexico through October 2015. Other recent solo shows have been presented at the Espoo Museum of Modern Art, Espoo, Finland (2014); ICA Boston, Boston, Massachusetts (2014) and The Metropolitan Museum of Art, New York (2013).

Kentridge has participated in Documenta (2012, 2002, 1997) as well as the Venice Biennale (2015, 2005, 1999 and 1993). In 2010, Kentridge received the prestigious Kyoto Prize in recognition of his contributions in the field of arts and philosophy. In 2011, he was elected as an Honorary Member of the American Academy of Arts and Letters, and received the degree of Doctor of Literature honoris causa from the University of London. In 2012, Kentridge presented The Charles Eliot Norton Lectures at Harvard University and was elected member of the American Philosophical Society and of the American Academy of Arts and Sciences. Also in that year, he was awarded the Dan David Prize by Tel Aviv University, and was named as Commandeur des Arts et Lettres by the French Ministry of Culture and Communication. In 2013, William Kentridge was awarded an Honorary Doctorate in Fine Arts by Yale University. In 2014 he received an Honorary Doctorate in Literature from the University of Cape Town, and in 2015 was appointed as an Honorary Academician of the Royal Academy in London.