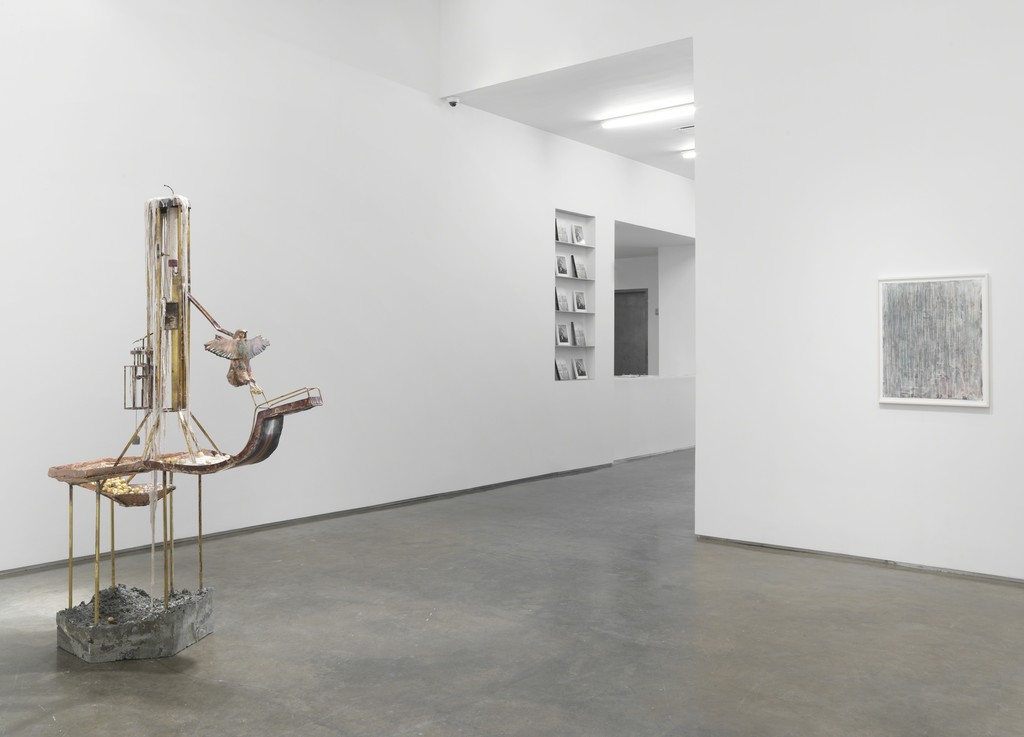 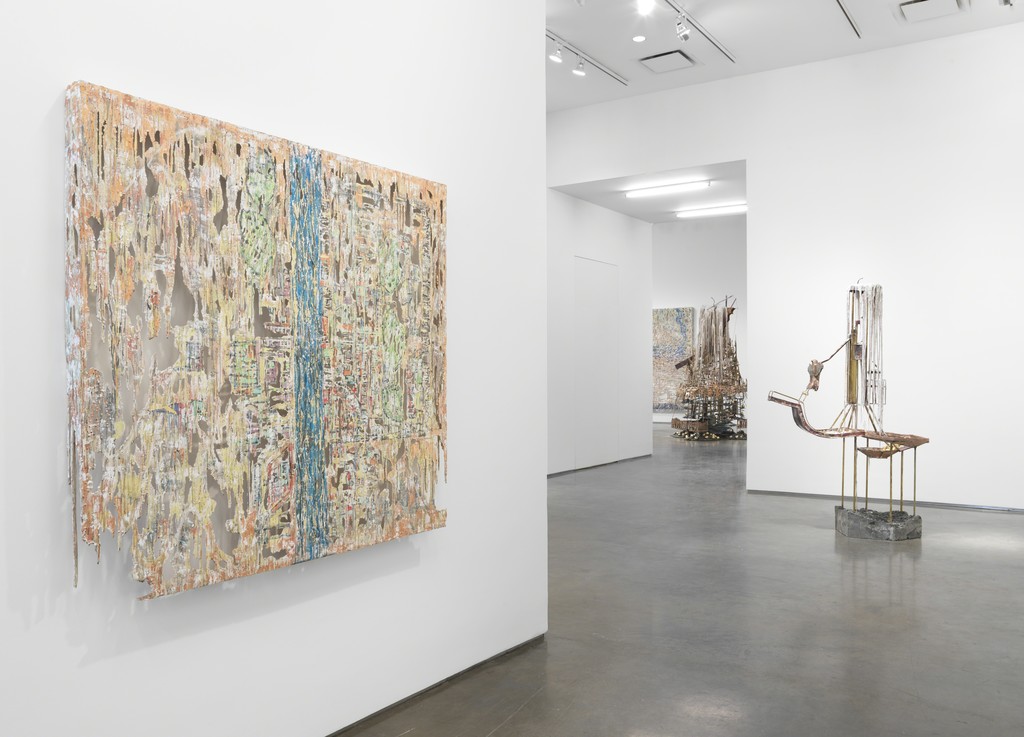 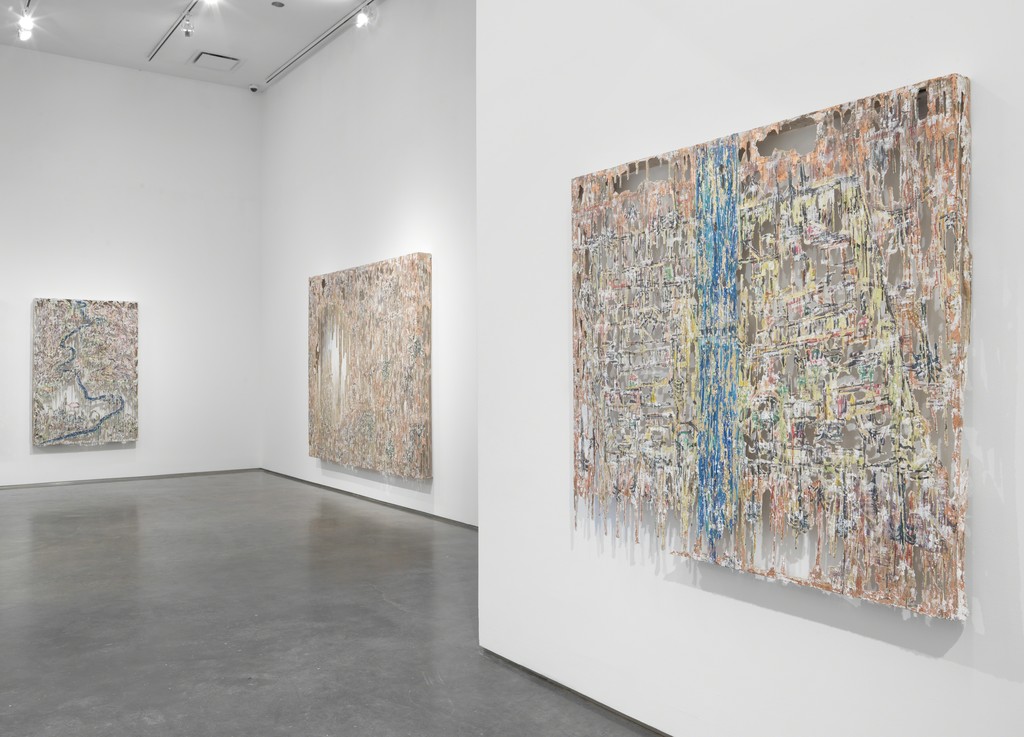 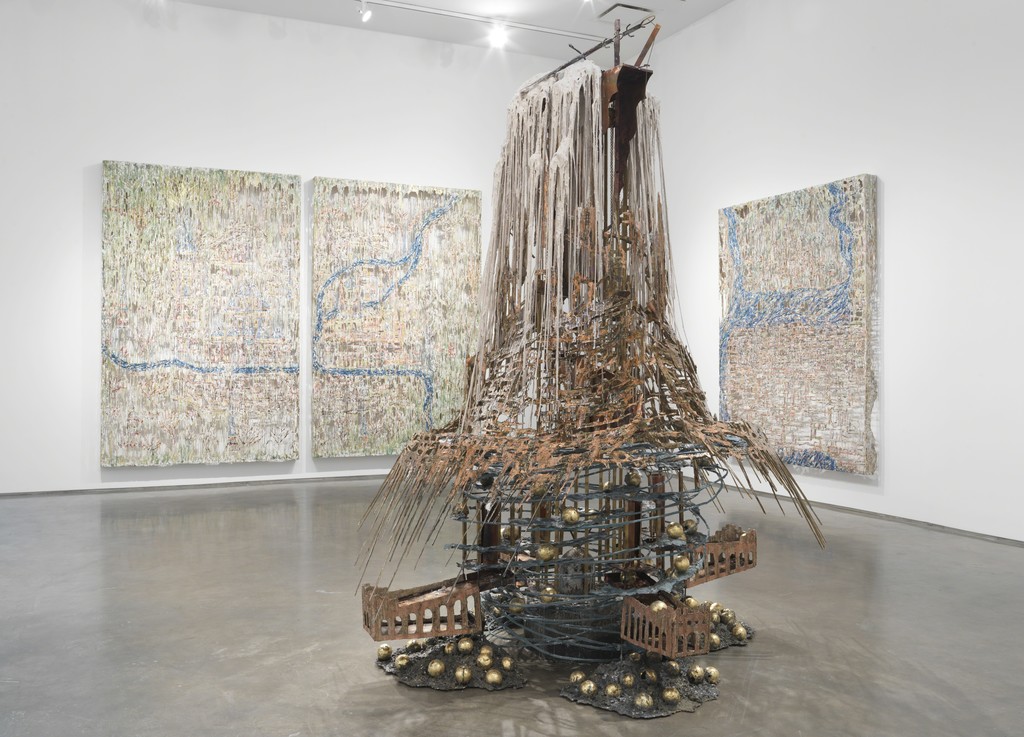 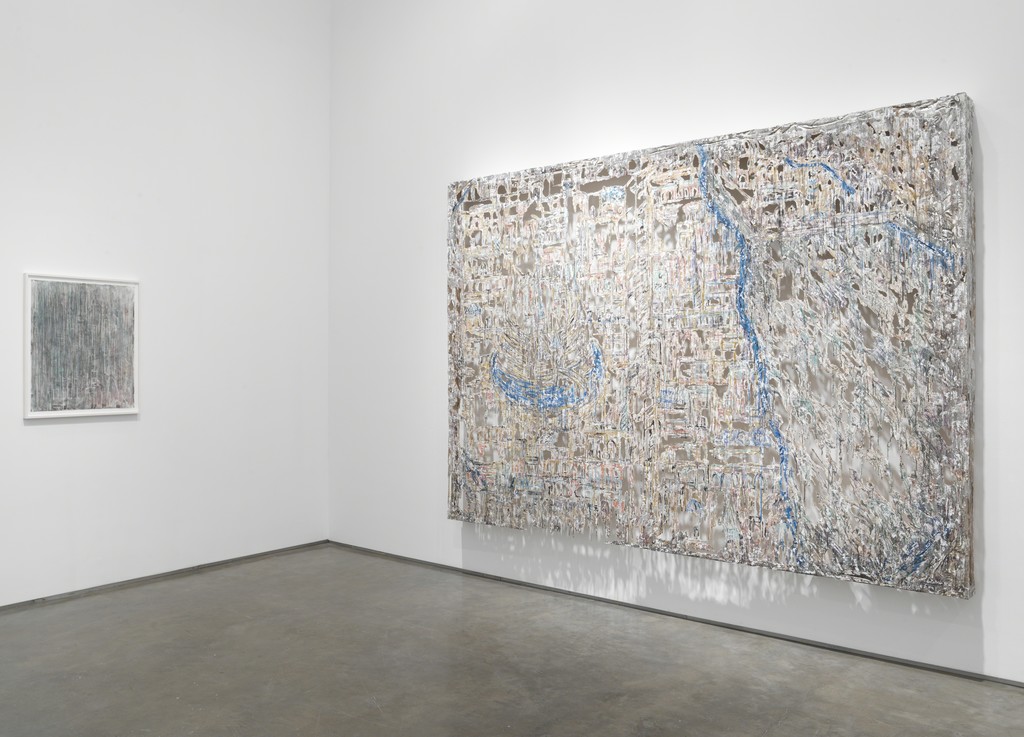 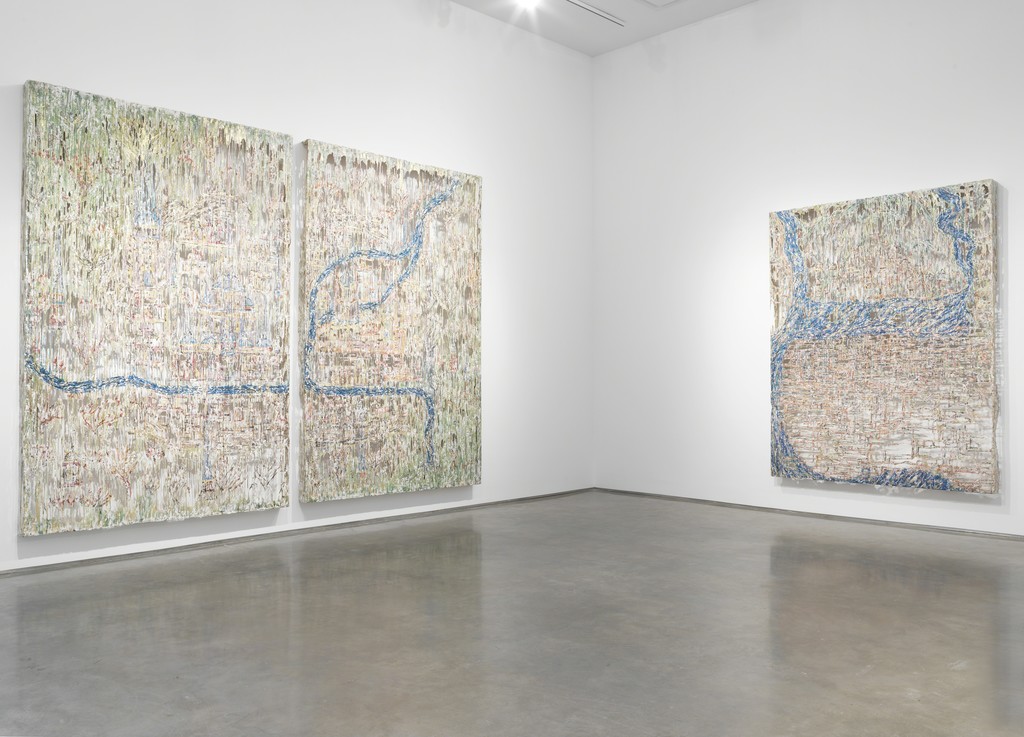 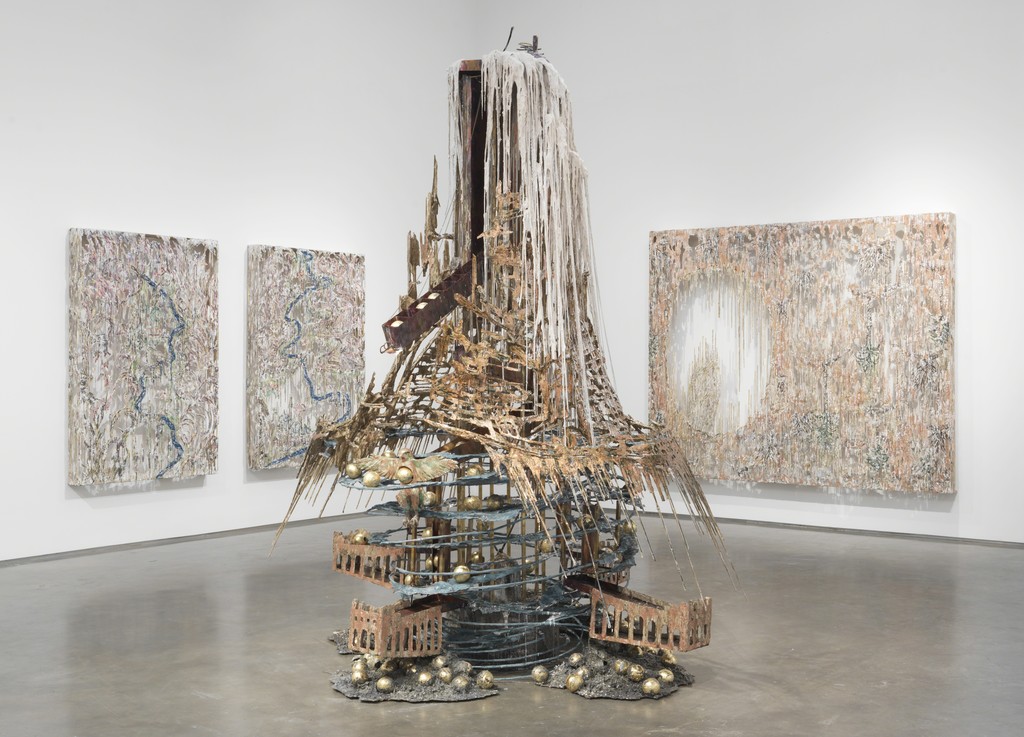 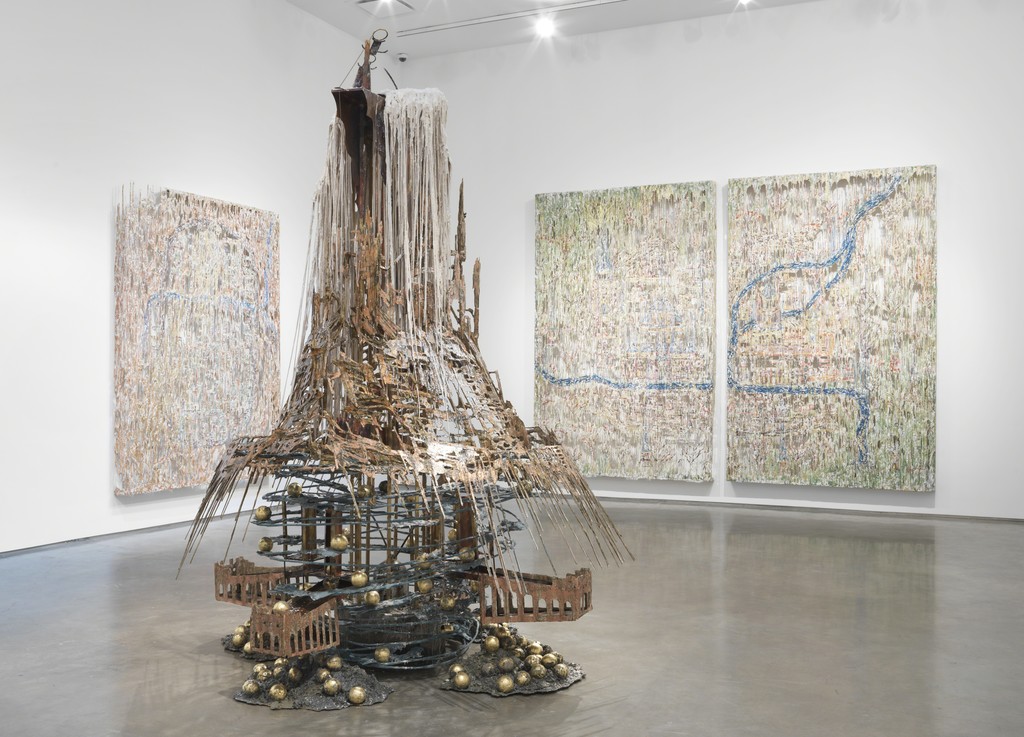 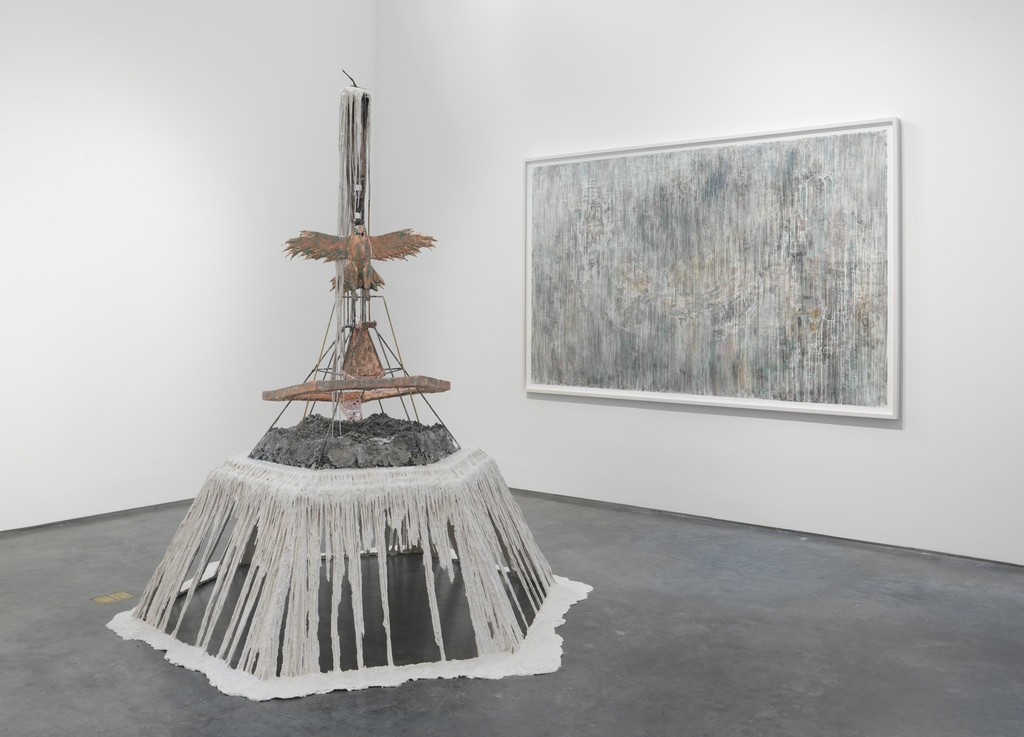 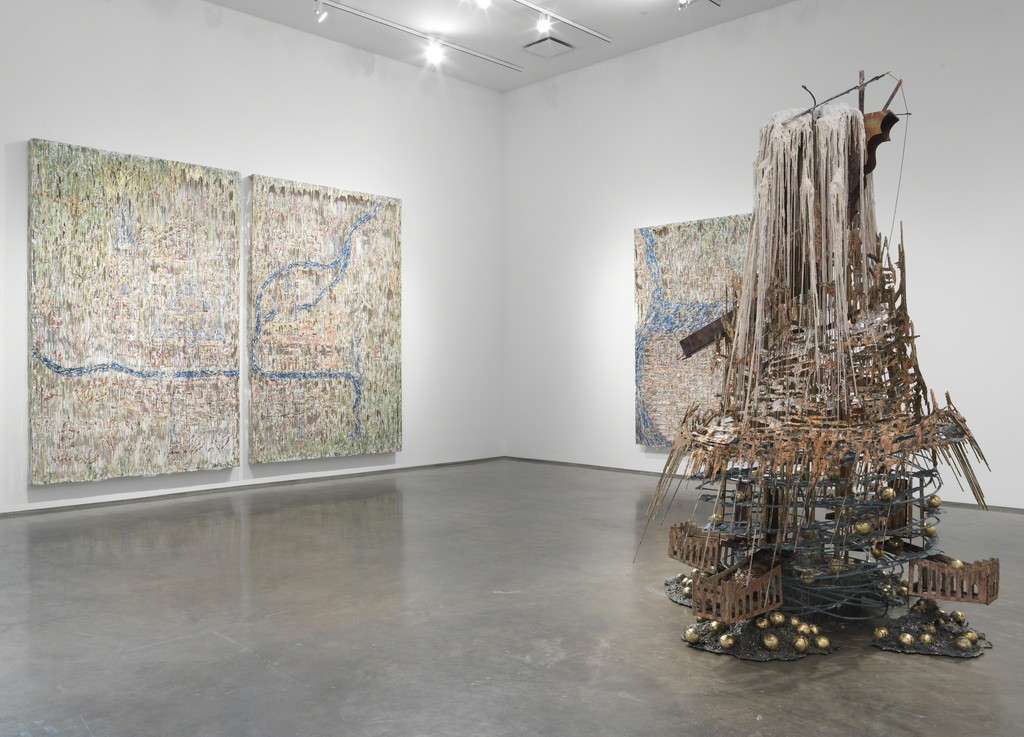 Marianne Boesky Gallery is pleased to present Falcon’s Fortress, Diana Al-Hadid’s third solo exhibition with the gallery. The exhibition brings together sculpture, works on Mylar, and the artist’s largest presentation of wall panels seen in New York, all of which are created by layered drips of material that form both their physicality and imagery. These seemingly frozen drips conjure an illusory space where landscape and architecture meld and objects dematerialize and generate simultaneously. For Falcon’s Fortress Al-Hadid looks to the past, resurrecting ingenious contraptions while reminding us of the contributions of intrepid scholars from the Islamic Golden Age and beyond.

Al-Hadid returns to an interest sparked seven years ago in innovations in early time-telling devices, namely those perfected by the 13th century inventor and genius Al-Jazari, and outlined in his “Book of Knowledge of Ingenious Mechanical Devices.” Where she previously took inspiration from him for the creation of a fictional water clock, for this show she closely examined his candle clock devices, which measure the passage of time by the decreasing weight and shortening length of candlesticks. For one such work, Al-Hadid constructed the core operational elements of the “Candle Clock of the Swordsman,” adding her own design modifications to expose the internal mechanics for audiences to view. Al-Hadid activated the clock timed to the August 2017 solar eclipse, honoring the long history of Islamic scholars and astronomers, who established observatories as early as the 9th century C.E. The activation of the clock concurrently memorialized this rare event and completed the sculpture as “candle wax”—actually made with gypsum—overflowed onto the work. The alteration of the “candle wax” reflects the artist’s continued play with material illusion.

Al-Hadid’s unique process of controlled dripping and pooling of materials is seen clearly in her wall panels. With the panels, the structure and the skin of the work are one. In effect the brushstroke precedes the canvas, with the painted image diligently reinforced and the voids created as a result of areas left unpainted. For the works in Falcon’s Fortress, Al-Hadid rotated her panels in the process of making, causing the drips to flow in different directions as she builds up the scenes, appearing as if woven. The resultant work is somewhere between tapestry and fresco, the image carefully stitched together and the material permeated by pigment. Architectural forms and landscapes disappear into abstraction as quickly as they emerge, drawing the viewer into a liminal space between the two.

For this series of panels, Al-Hadid looked to another Islamic polymath, the 15th-century, Bosnian-born Matrakçi Nasuh. A renowned mathematician, cartographer, and swordsman, Nasuh was also a celebrated miniaturist who traveled with the Ottoman army painting highly detailed panoramic views of the cities and suburbs between Istanbul and Baghdad, and other territories on his expeditions. His delicate collection, “Menazilname,” was a vividly painted catalogue of the various edifices, campsites, waterways, flora, and fauna that populated the Empire. One such depiction is of the Citadel that dominates the city of Aleppo, the artist’s birthplace, which Al-Hadid casts and bends to form a “sheath” or protective fortress around the internal mechanisms of another of Al-Jazari’s candle clocks, in which balls measuring the passage of time fall through a sculpted falcon. Placed at the center of the exhibition, the sculpture connects to the other works through the recurring image of the falcon, which plays the role of observer, documentarian, and perhaps even guardian. When viewed together, the falcon appears to alight from the clock traveling through the various lands, on a journey through history and ingenuity.