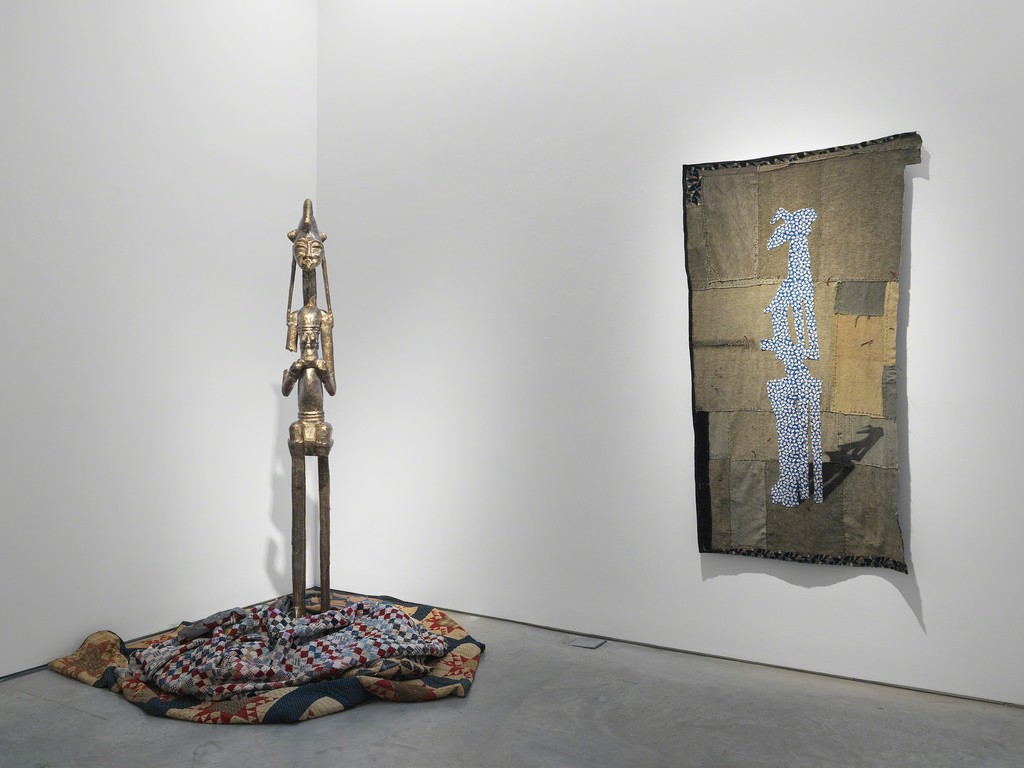 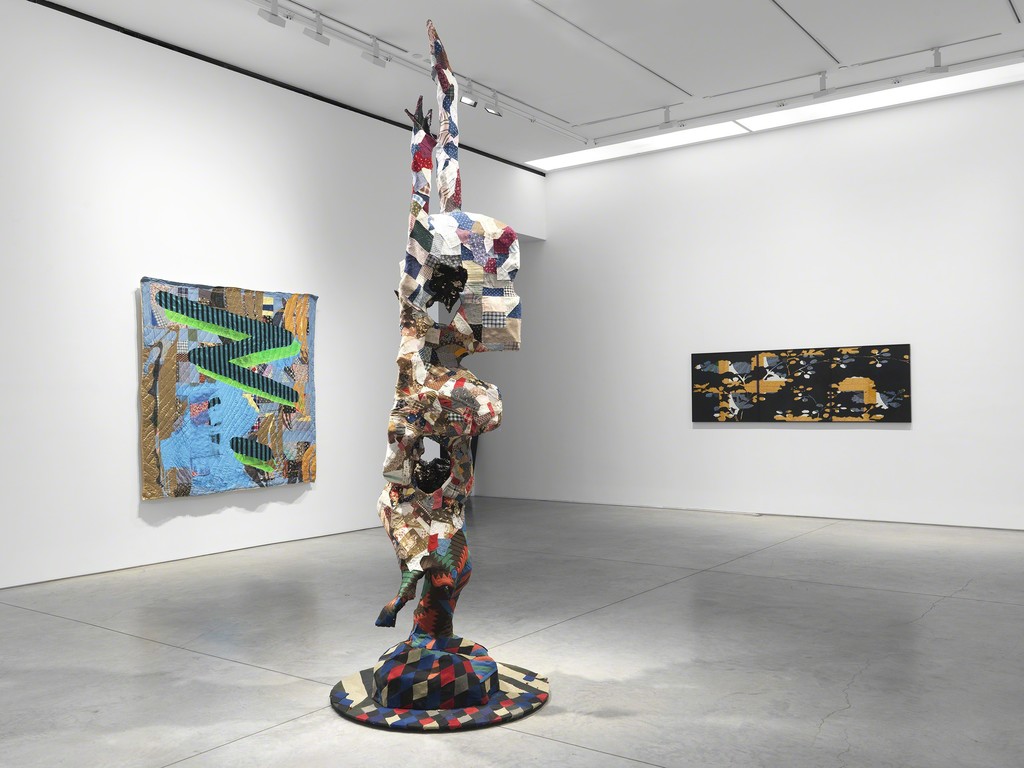 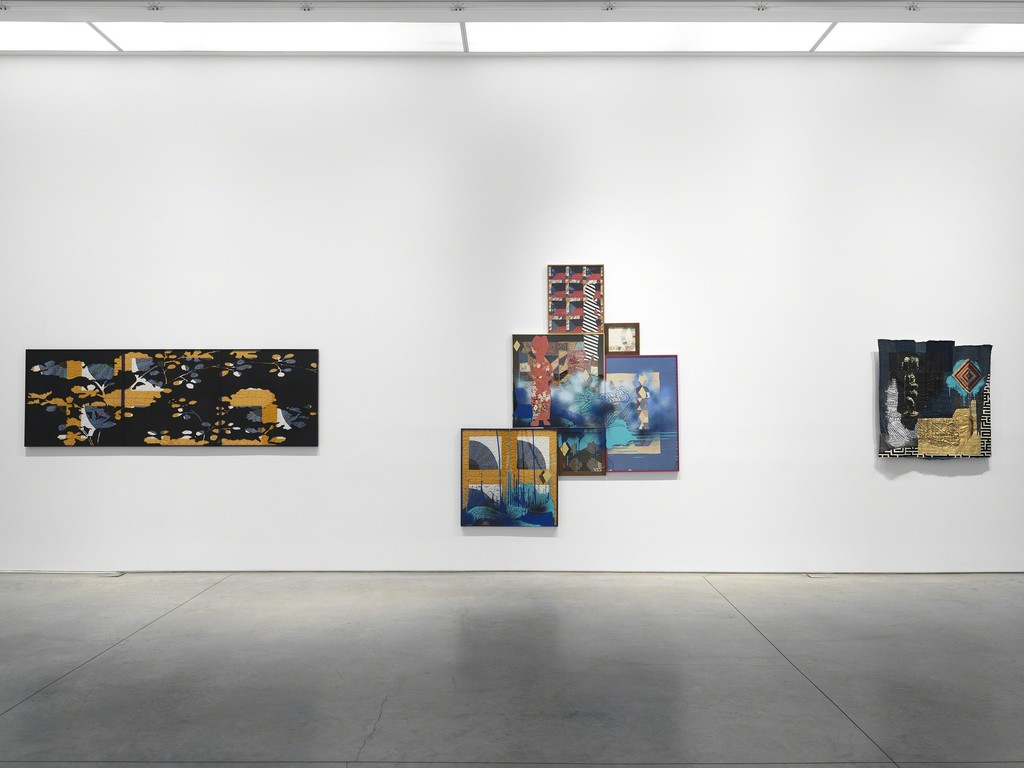 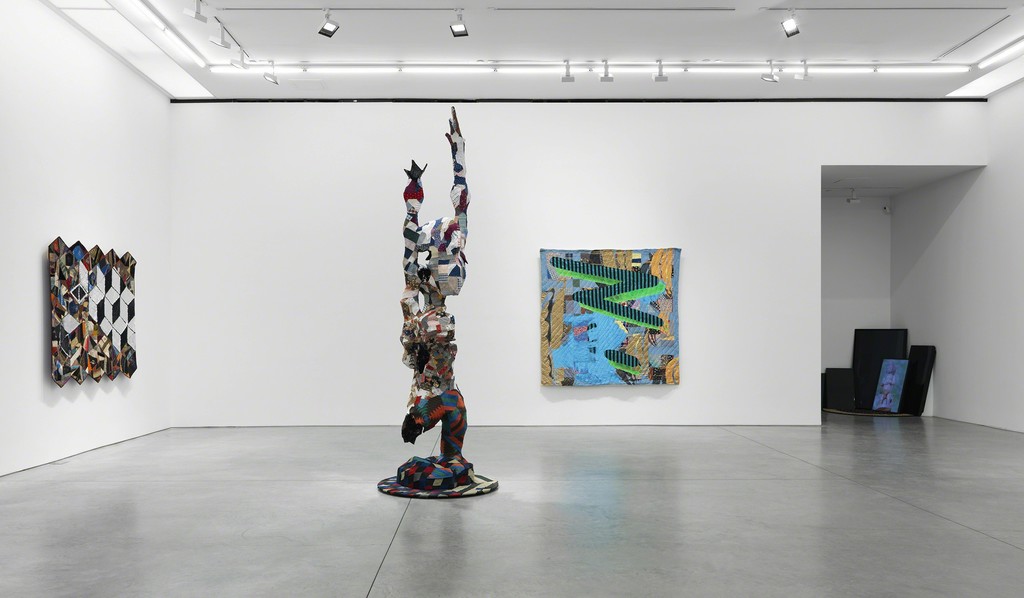 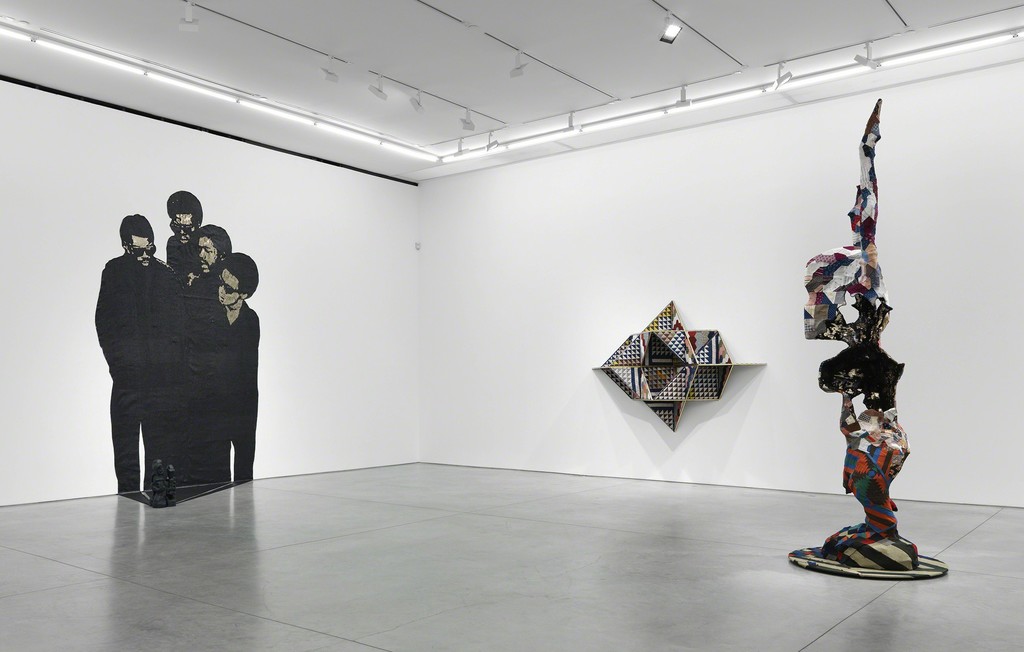 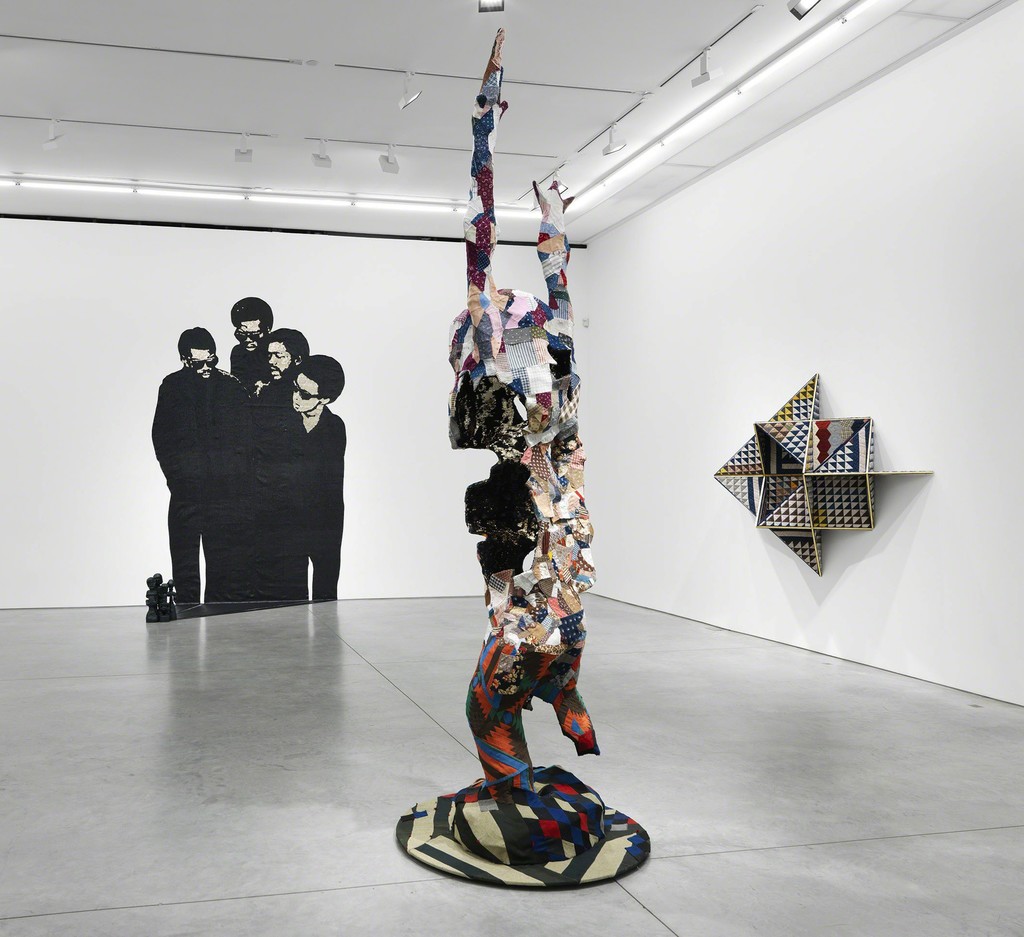 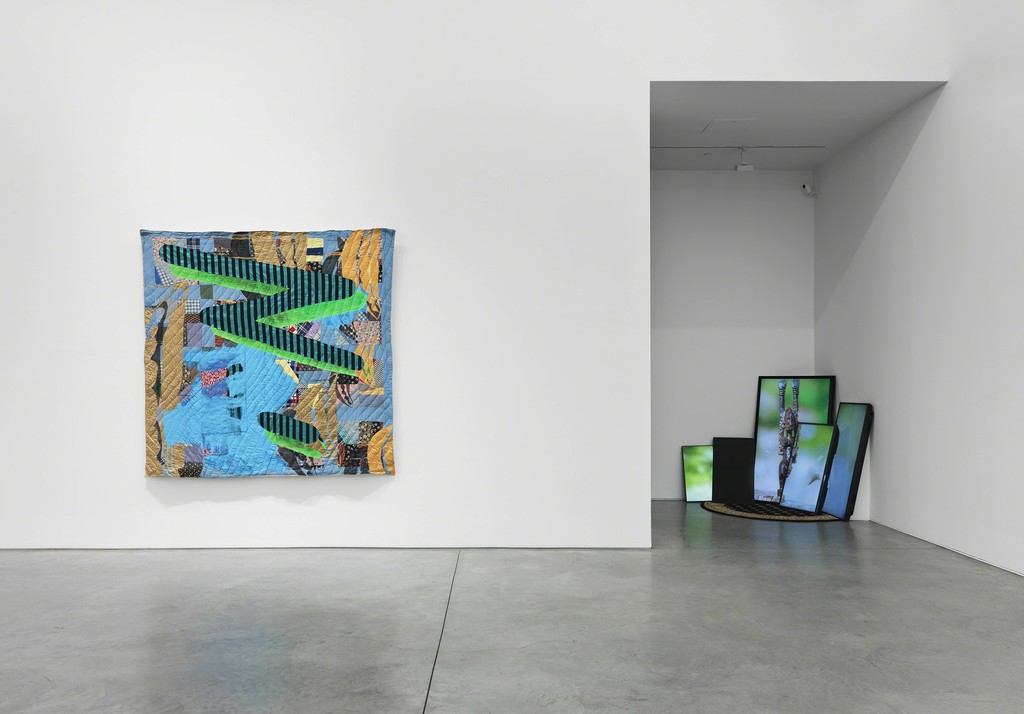 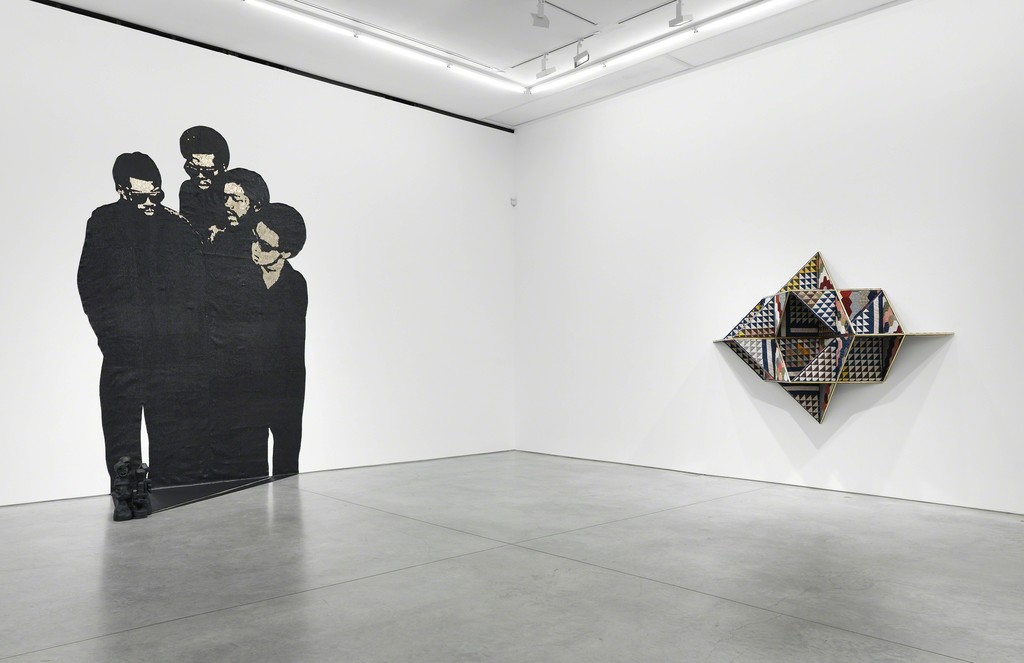 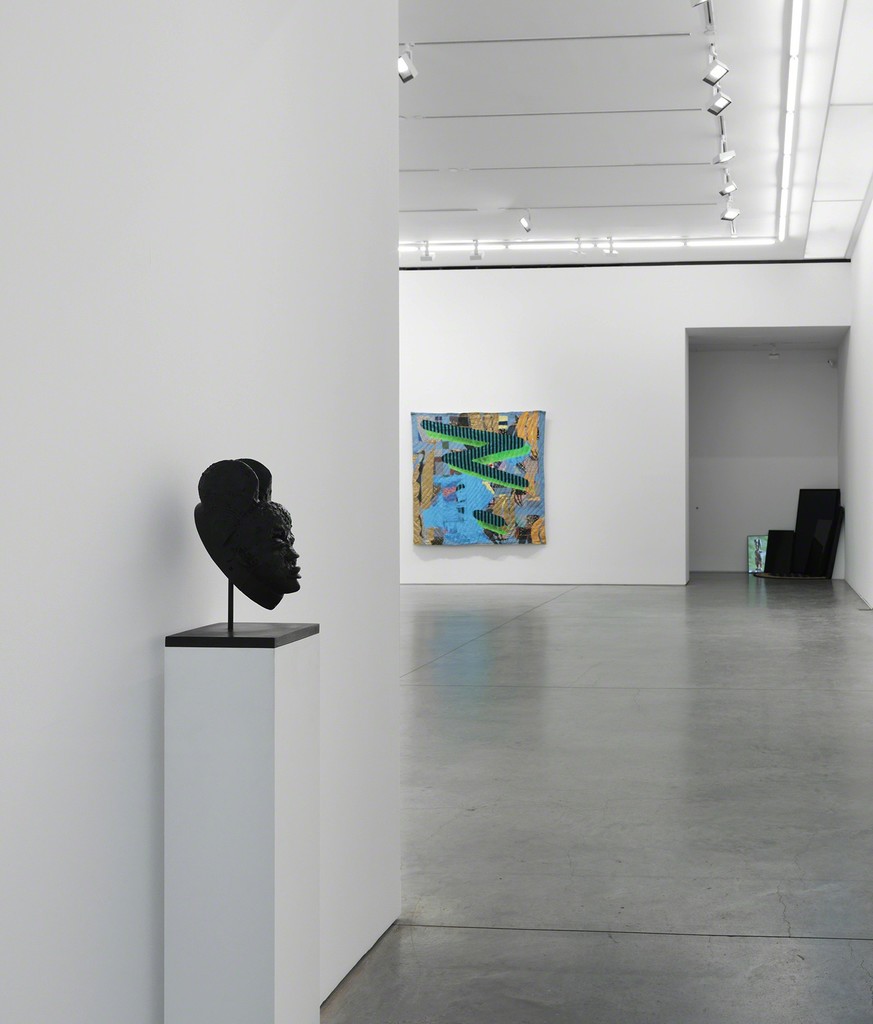 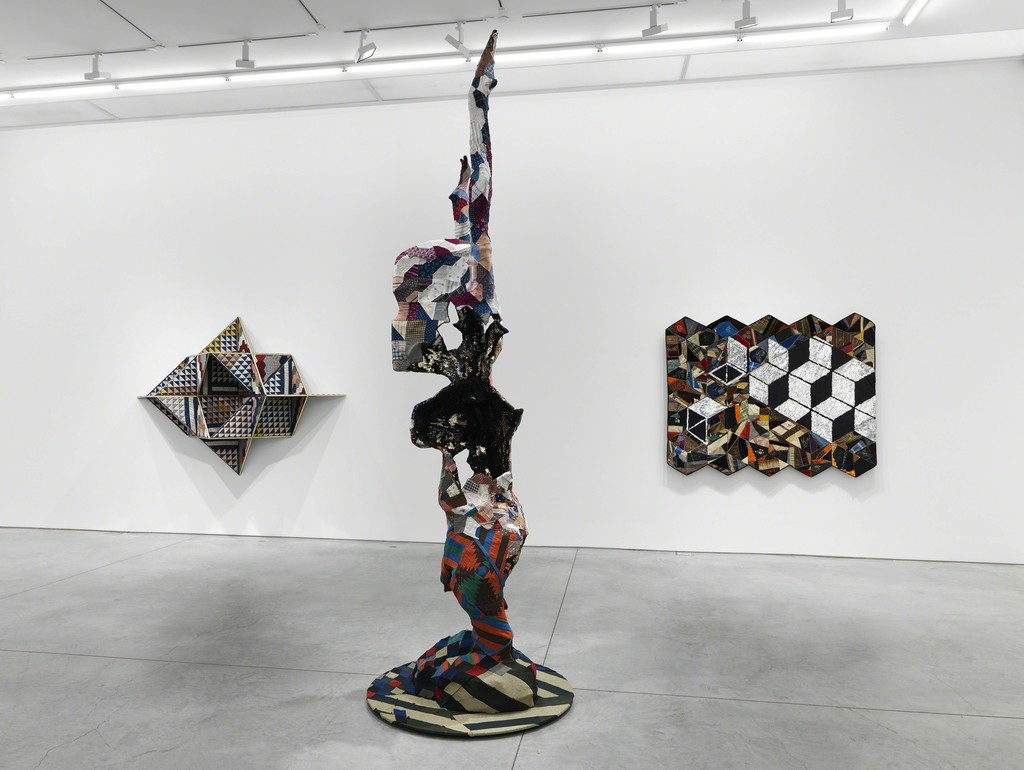 Marianne Boesky Gallery s pleased to present Selah, Sanford Biggers’ first solo exhibition with the gallery. Through symbolic gestures and imagery Biggers creates an experience that highlights often overlooked cultural and political narratives in American History. The artist’s expansive body of work encompasses painting, sculptures, textiles, video, film, multi-component installations, and performance. Biggers’ syncretic practice positions him as a collaborator with the past, adding his own voice and perspective to those who made and used the antique quilts, African sculptures, and cultural imagery he references. His work speaks to current social, political, and economic happenings as well as to the historic context that bore them.

“Central to the theme of this exhibition is the potential of objects to transform our experience and understanding of the human condition. This includes a cycle of life and death, and within it a relationship between the living and the dead. Veneration both honors those who have passed and seeks their guidance and perspective. In this way, Seated Warrior acts as a gatekeeper to the rest of the exhibition, allowing visitors to meditate on both the experiences of the dead and on the path forward for those of us still here,” said Biggers. Seated Warrior is part of the artist’s ongoing BAM series responding to recent and ongoing occurrences of police brutality against Black Americans. The series of bronze works are made from wooden African sculptures that the artist collected, dipped in wax, and transmogrified with piercing bullets and then subsequently cast in bronze and accompanied by a video recording their “ballistic” sculpting. Seated Warrior, punctured by a single gunshot, expands the series beyond the recognition and remembrance of these tragedies into an exploration of the human condition and the desire for transcendence.

The show’s central figure, also entitled Selah, stands over ten feet tall with its arms raised. Like the BAM works,its shape originates from a wooden African sculpture of a figure preparing to bend in worship or prayer. The posture bearing a striking resemblance to one of “hands up”. Covered with antique quilts, and lined with sequins, Selah also shares direct connections with the artist’s well-known textile works in which the body is a critical component. The antique quilts serve as signifiers of bodily protection, presence and absence, and the conflated histories that are sewn onto each surface. The quilts provide warmth; hold the legends of their use as signposts on the Underground Railroad; and contain the presence of the original makers’ hands in the stitches, appliques, and patterns. Drawn to respond not only to the patterns and colors of the textiles, but to their deeper meanings, Biggers paints and draws directly on the quilts using acrylic and spray paint, tar, charcoal and oilstick. This dismantling and reassembling of patterns has also led Biggers to recently expand the quilts dimensionally into multifaceted wall works, creating a congregation of histories secreted away in niches and nooks.

“These quilts in most cases are over hundreds of years old. Some have already been altered and re-contextualized by subsequent owners and I see myself as a late collaborator, contributing to their history and function in this present moment. Perhaps decades from now, this work will also be re-contextualized, creating an ongoing narrative over time,” said Biggers. “It’s very much like history itself, a patchwork of experiences, perspectives, and reportage that attempt to construct a single narrative but these works recognize that history is always subject to time itself, and subsequently unfixed.”

This interplay of history, narrative and perspective is further typified by “Overstood,” a towering sequin silhouette on the south wall of the gallery accompanied by a group of simulated African statues carved by the artist appearing to cast the tall shadows. At quick glance the portraits could be mistaken for a group of soul singers. But, a more studied examination reveals the visages of Ben Stewart, George Murray, Bobby Seale and an unnamed observer at a press conference in Oakland, California on November 21, 1968 during the longest and most violent student-lead protest in American history—a protest which culminated in the establishment of the College of Ethnic Studies at San Francisco State University in 1969. Biggers’ shadowed figures remind us that the pursuit of social justice and equality remains just as relevant today, as it was fifty years ago, and in the fifty years prior and prior to that.

Biggers’ practice has been celebrated through solo exhibitions nationally and internationally, including at the Museum of Contemporary Art Detroit, Massimo de Carlo Gallery, Massachusetts Museum of Contemporary Art, Brooklyn Museum, and Sculpture Center, among numerous others. His works have appeared in venues worldwide, including the Metropolitan Museum of Art, Barnes Foundation, Tate Britain and Tate Modern, Whitney Museum, and the Studio Museum in Harlem, New York as well as institutions in China, Germany, Hungary, Japan, Poland and Russia. He has participated in notable exhibitions such as Prospect 1 New Orleans Biennial, Illuminations at the Tate Modern, Performa 07 in New York, and the Whitney Biennial. His works are also included in the collections of the Museum of Modern Art, Walker Art Center, Whitney Museum, Brooklyn Museum and Bronx Museum. In winter 2017, Biggers was awarded the prestigious Rome Prize in Visual Arts by the American Academy in Rome. He is Associate Professor and Director of Sculpture at Columbia University's Visual Arts program. Originally from Los Angeles, Biggers has been based in New York since 1999.