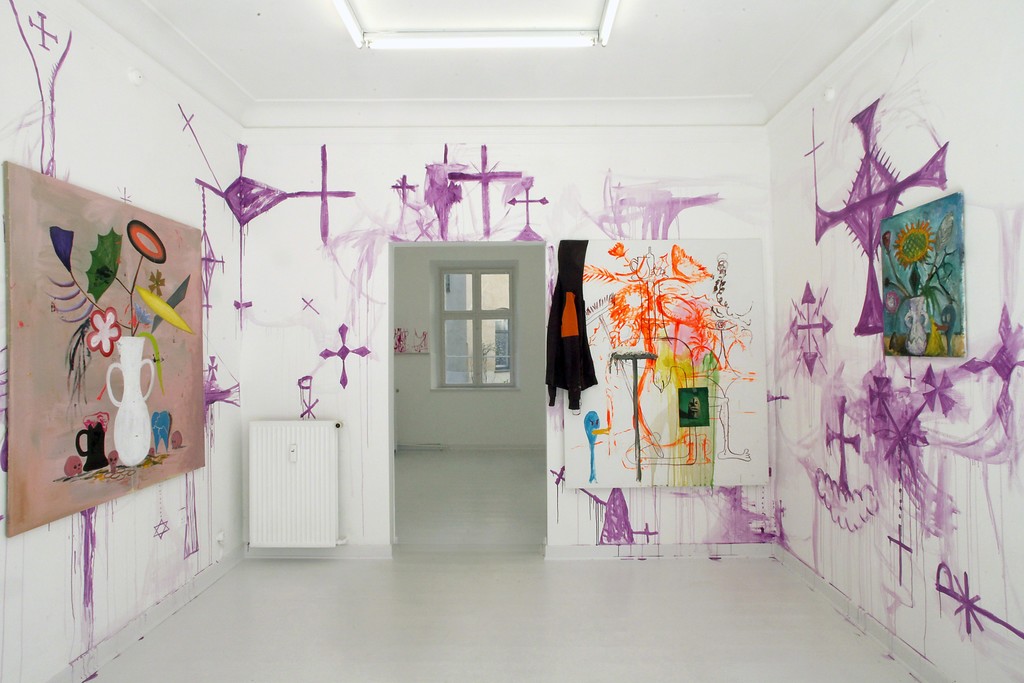 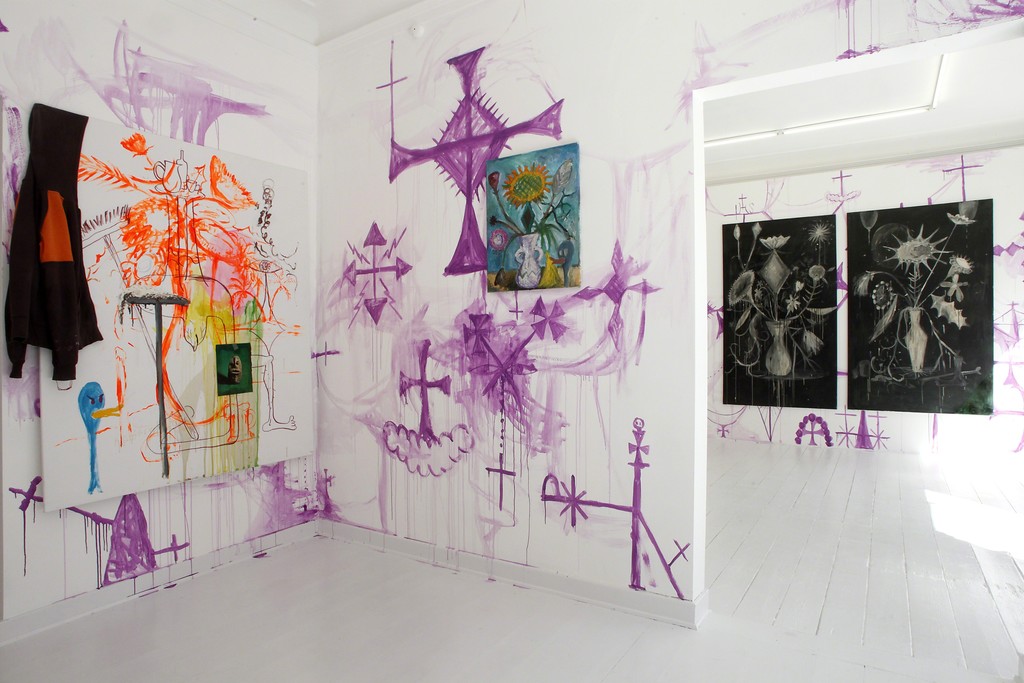 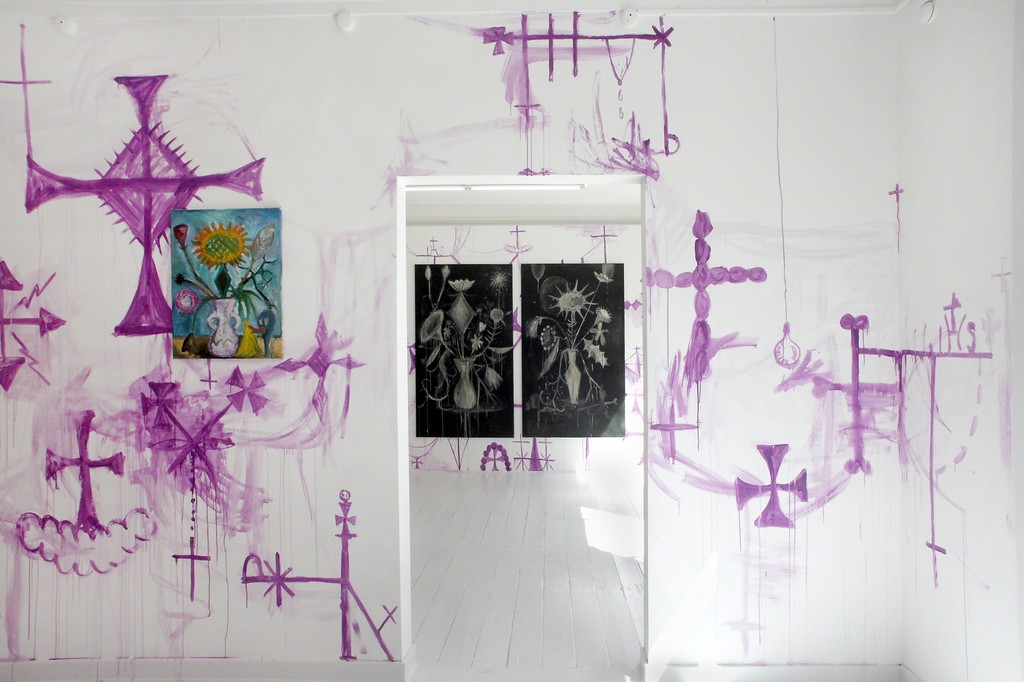 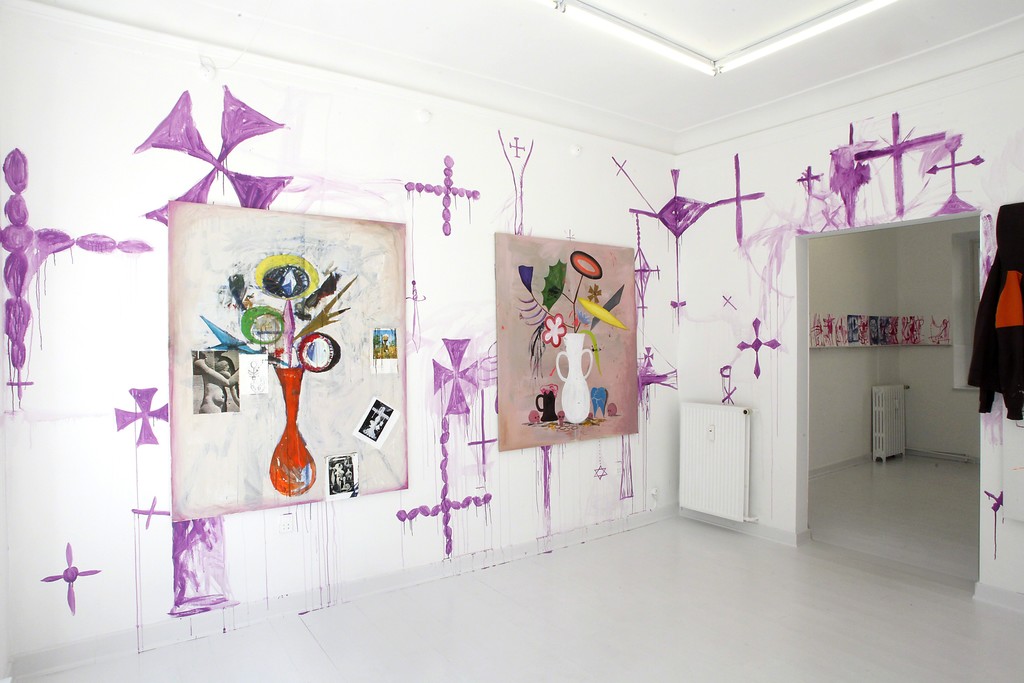 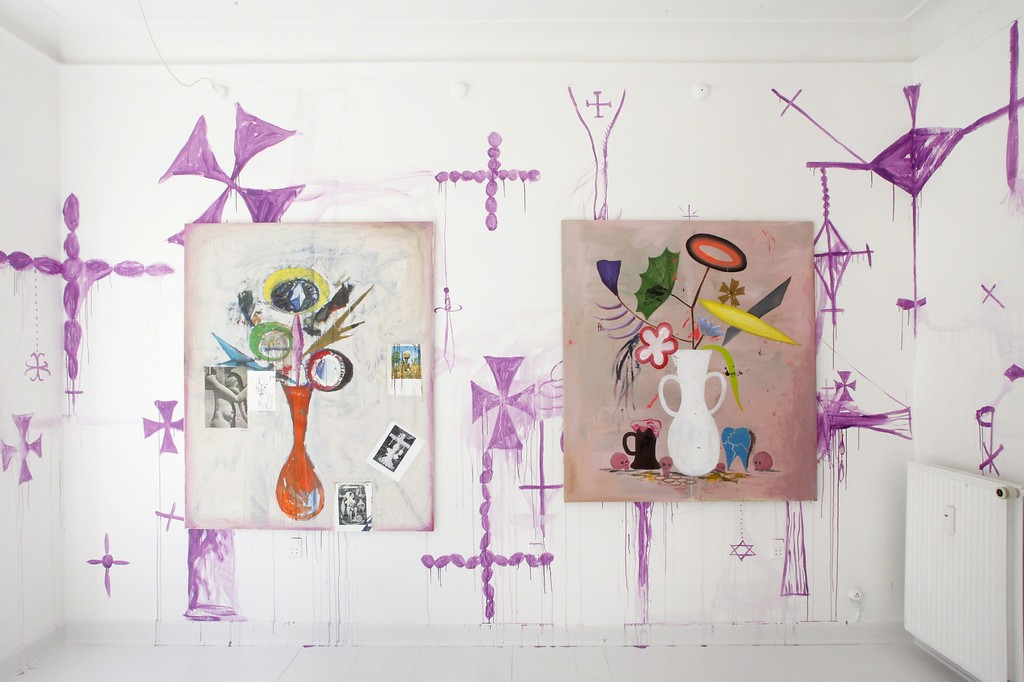 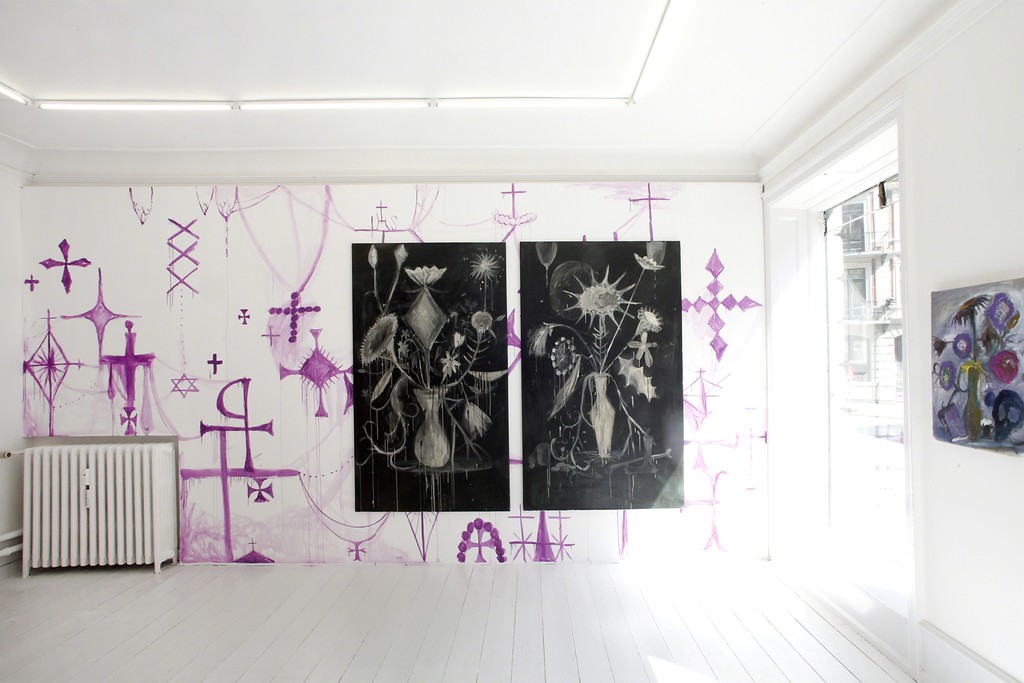 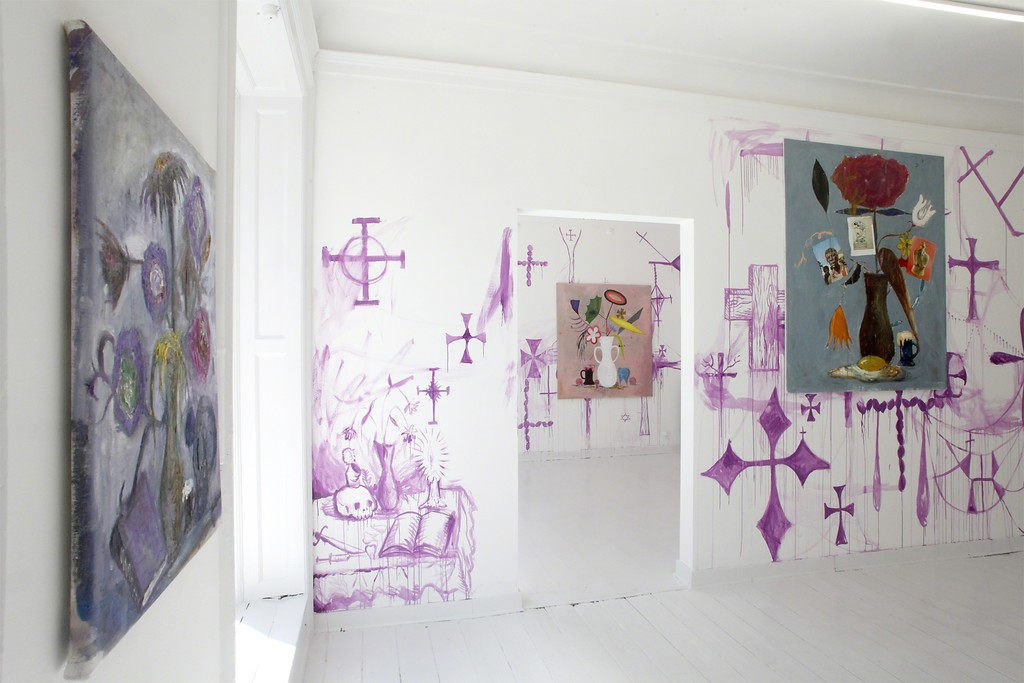 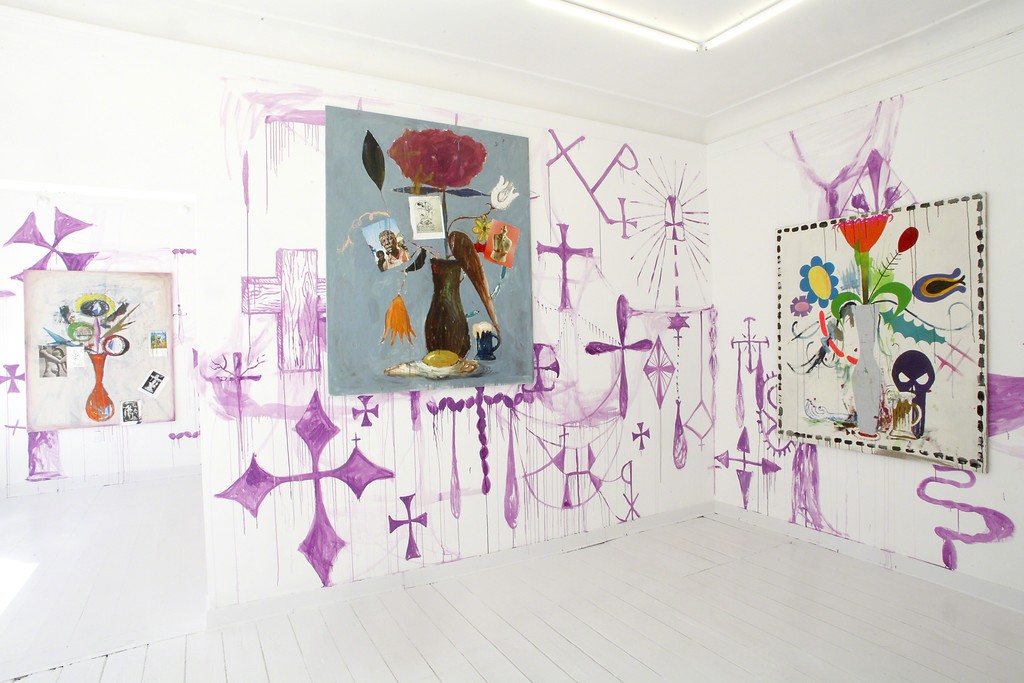 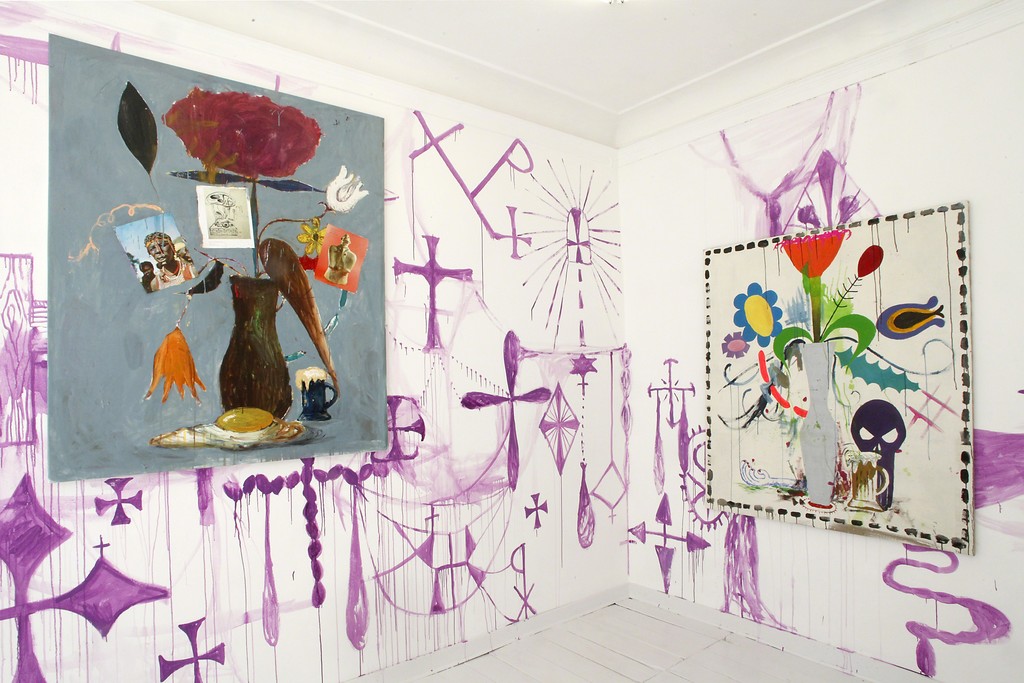 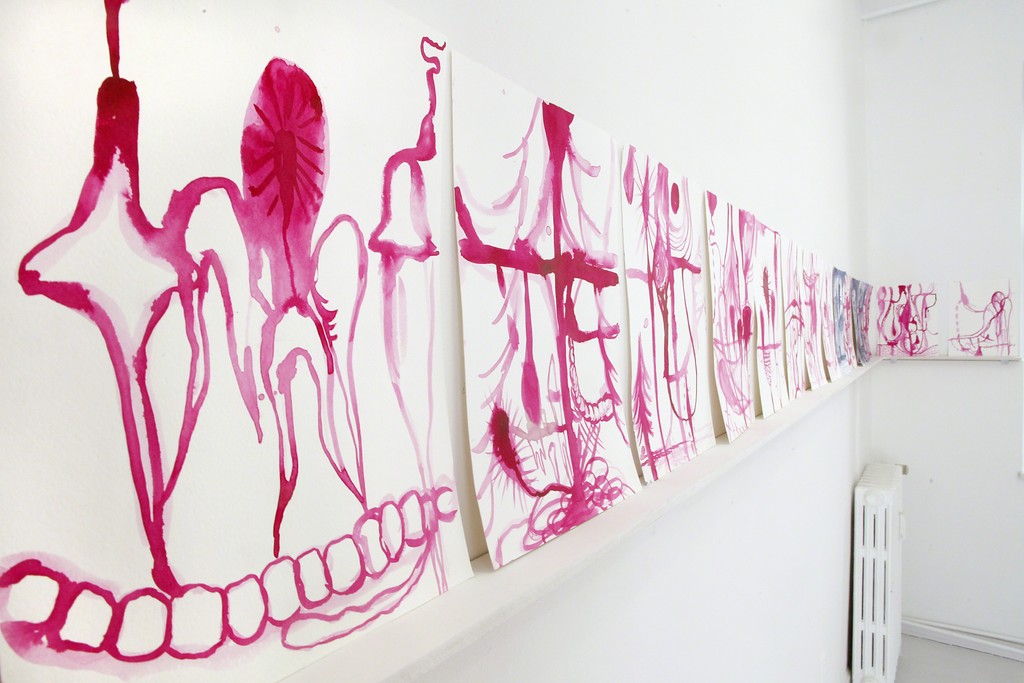 It is with great pleasure that we welcome you to the opening of the gallery with Manuel Ocampo’s solo exhibition Monument to the Pathetic Sublime.

Manuel Ocampo emerged out of nowhere when the heyday of 1980’s Postmodernist art was coming to a close, giving way to an urgent voice that sought to level the cultural field through the representation of the ”Other”. Ocampo was born and lived under Ferdinand Marcos’ grip, through the period of martial law, while attending Catholic school for his primary education. He was trained by local priests to make copies of devotional retablo paintings, which considerably composed his formal art training. In the time right after the People’s Power Revolution toppled Ferdinand Marcos Ocampo migrated to California from the Philippines. Within such conditions he wrestled with the trinity of the spiritual (Spain), the material (US), and the self (the Philippines).
By the early 1990s, his reputation was firmly established, and he is known for fearlessly tackling the taboos and his bold use of a highly charged iconography that combined Catholic imagery with motifs associated with racial and political oppression.

Monument to the Pathetic Sublime presents a new series of paintings and works on paper made especially for the exhibition. They are a new exploration for Ocampo regarding his signature aesthetic of negation. His familiar iconography includes crucifixes, swastikas, Star of David, excrements, genitalia, sausages, fetuses, ghosts, entrails, chicken drumsticks, toilet, teeth, feet, hands, sperm, egg yolks, rats, roaches, hooded figures, used condoms, liquor bottles, money, drugs, flowers, etc. which are already symbolically powerful on their own as images of authority and its opposite, the abject, but in his hands all together produce an apocalyptic tone that touches the nerve of the times.
Ocampo's work appear to us as terrifyingly undeniable yet at the same time incomprehensible and complicated, since their meaning is always shifting and contradictory, in tandem with the artist's penchant for switching his mode of production from one aesthetic to another. Though the particular iconography he uses allows them to be construed as expressions of post-colonialism (and thereby postmodernist), the distinct character which makes Ocampo's work stand out from any sort of category is essentially tied to the work's idiosyncratic negation of such labels. What makes the current work so unique, as Ocampo's drive to kill all predictability in reading his work, is the elimination of the comfort of illusion, in the conscious abandonment of unnecessary extravagance demanded of craft, and the absence of a representative backdrop that constitutes the explanatory context or reason common to all paintings - which renders this work abstract in the manner that can only be his.

Manuel Ocampo (b. 1965, the Philippines) has been a vital presence on the International art scene for over 20 years, and has participated in ground breaking shows, such as Helter Skelter at MOCA and various international biennales in Berlin, Venice, Sevilla, Kwangju, as well as Documenta 9 og Asia Pacific Triennale. He is featured in critical publications on contemporary art, such as Vitamin P: New Perspectices in Painting and Art Now: 137 Artists at the Rise of the New Millennium. Today he is the most internationally active artist from the Philippines exhibiting from Manila to Luxembourg, Berlin to New York and Melbourne to Copenhagen, bringing with him a unique world view that blends history, politics, religion, society, identity, and aesthetics in a personal language that remains critical as it is autonomous.