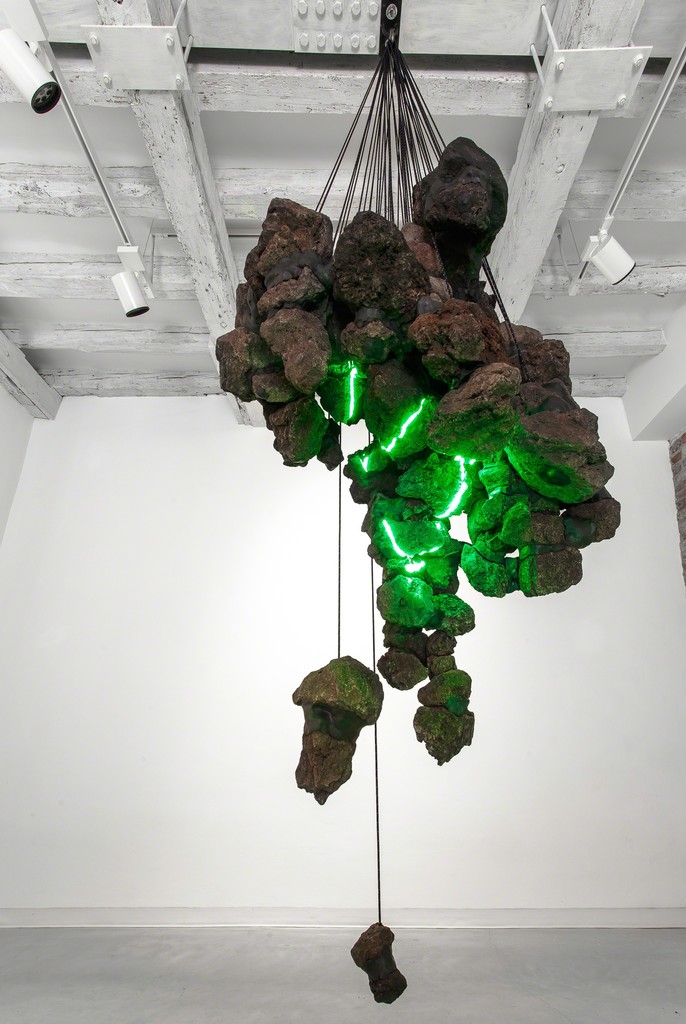 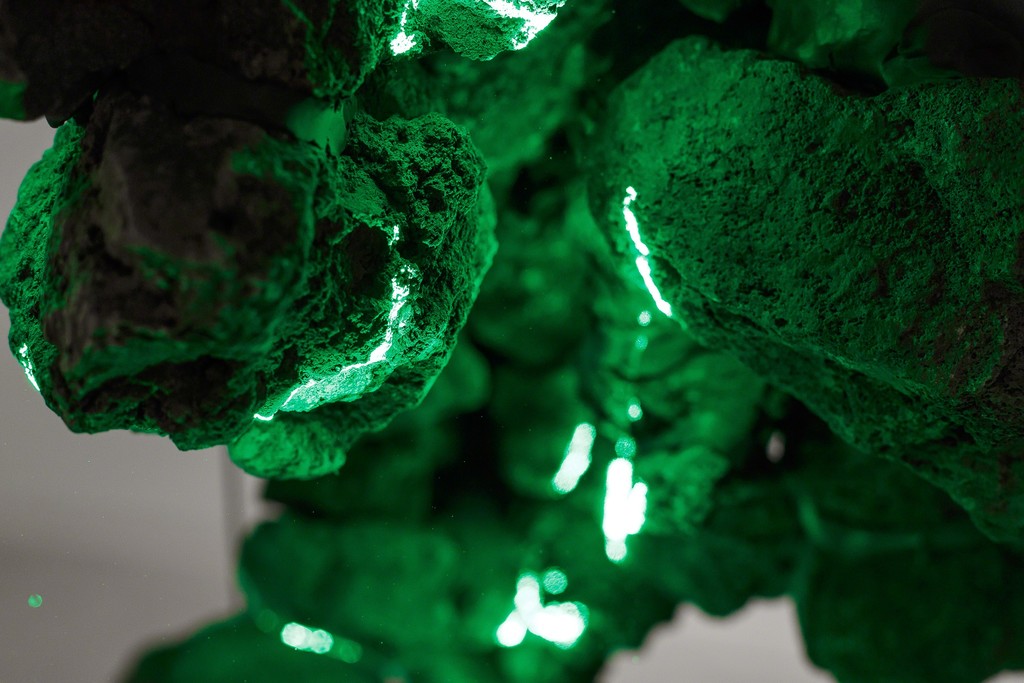 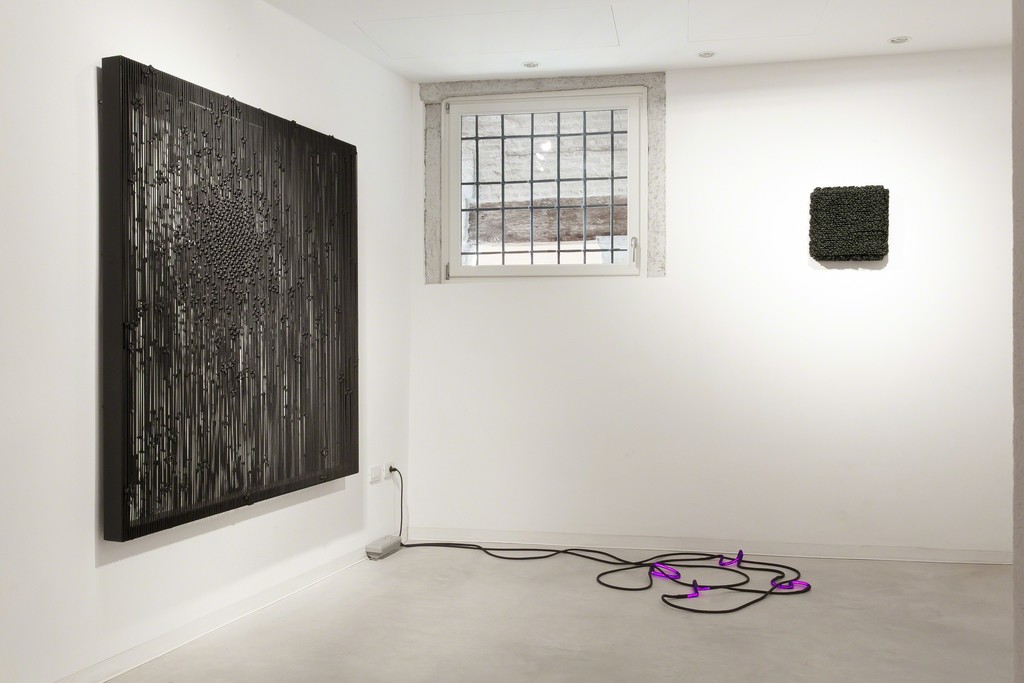 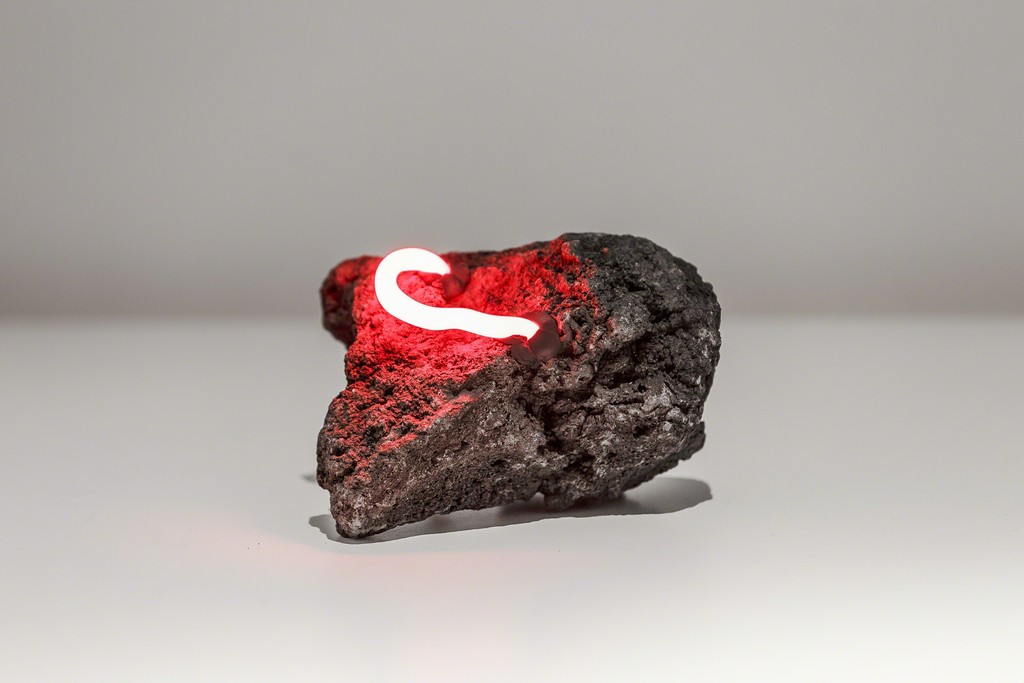 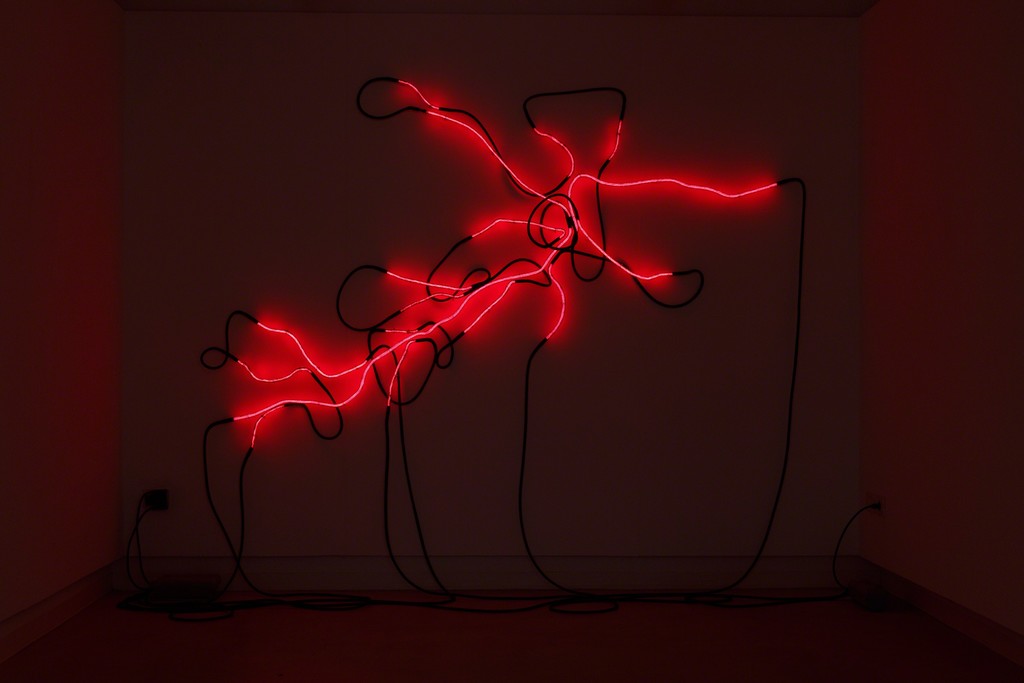 The exhibition presents a new series of works made specifically for the spaces of Marignana Arte by the artist
Arthur Duff, an American artist born in Wiesbaden in 1973 (who lives in Vicenza). Light as means of verbal
information and flow of cognitive energy, for years at the heart of the artist’s creative thinking, is interpreted
in these recent works with new coordinates that point to unfamiliar directions of investigation.
Duff’s light is not one of an atmospheric or exterior vibration, but a light conceived as the complex space of
a continuous and shifting vital process occurring between cosmic interstellar regions, telluric depths and
implied digital virtual realities. One of the pieces made for the occasion, Things with beginnings, renders
emblematic this explicit dimension of “the primordial” in his present research: a black volcanic stone is
associated with a green laser light that projects verbal elements on the surface of this immemorial material.
The stone that emitted a deflagrating light in turn reabsorbs light, creating a complex sculptural space,
between physicality and virtuality. The work that gives the show its title, Things with endings, utilizes in an
unusual way another luminous material–neon light–that is filtered either by a chromatic coating or an elastic
weave wrapping and becomes a physically determined projection of its letters, expressively expanding the
neutral space of the linguistic information.
The visit is completed by several wall pieces: a camouflage embroidery and a work made of perforated
paper that focus on the physical and perceptive interaction of several planes and viewpoints, creating a
vision of depth and virtuality, along with some new pieces of the artist’s characteristic knotted works.
Layered and clustered knots, their reciprocal configurations reuse some fragments of stellar clusters shown in
Charles Messier’s 18th-century astronomical catalog making them interactive, and playing on the opposition
between microcosm and macrocosm, where the insertion of green and orange in the dominant black
surface, in a sort of residual pulsing of energy, presents the two variants of density and rarefaction.
These are works that exploit and renew several of the artist’s recent creations: at the MACRO Museum of
Contemporary Art Rome (2009), Villa Pisani at Bagnolo di Lonigo (2012), Castelvecchio in Verona (2012),
Palazzo Malipiero in Venice (2013), including the work Black Stars_M13 – M92 presently shown at Palazzo
Fortuny in Venice.
In the laser projections, based on the combination of artificial light and spatialized language, as in the
knotted stratifications of implied stellar fragments, light is for Duff the metaphoric possibility prior to a transit,
a voyage, in the world of information as a potentially infinite physical and dynamic material. Indeed Duff’s
work has always concentrated on the creation of complex spaces of experience, both visual and physical,
that use laser projection or the pulsation of images (either luminous or obtained through patterns and
embroidery) to bring forth ever surprising configurations, dialoguing with the spatial and cognitive
coordinates of a present henceforth almost entirely arisen from experiences of digital and virtual reality. In
these recent works, his experiments appear to have taken the form of a voyage into the future, in primordial
landscapes of a matter without humanity, where the only human signal left is precisely the illuminating
connection of language.