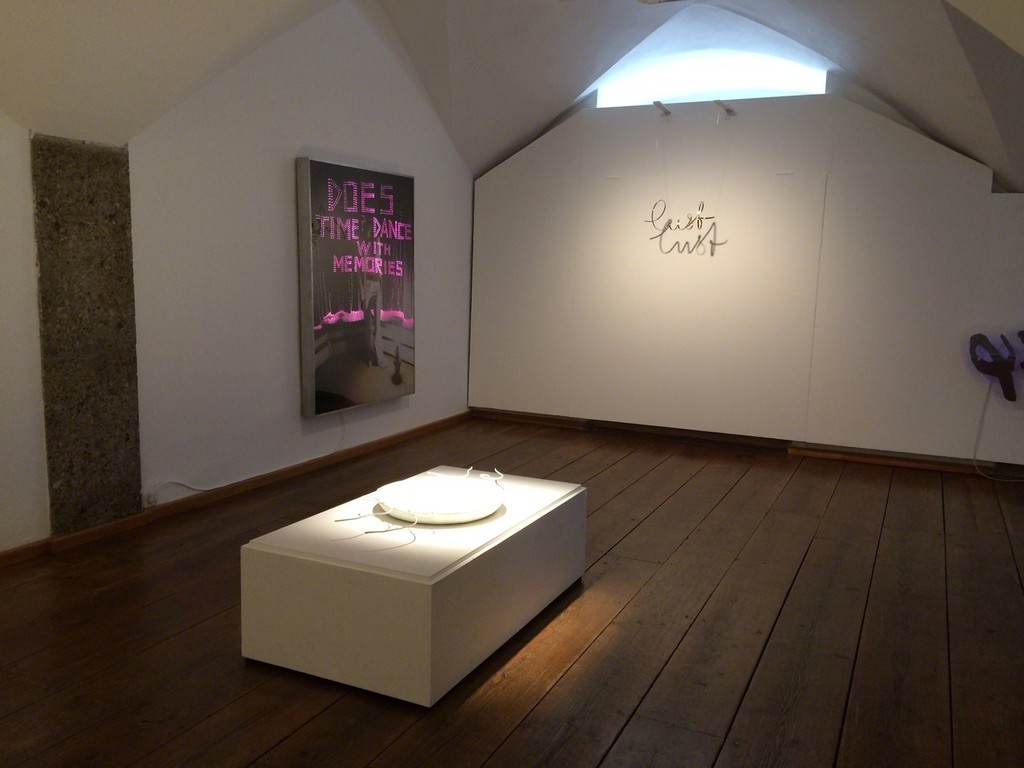 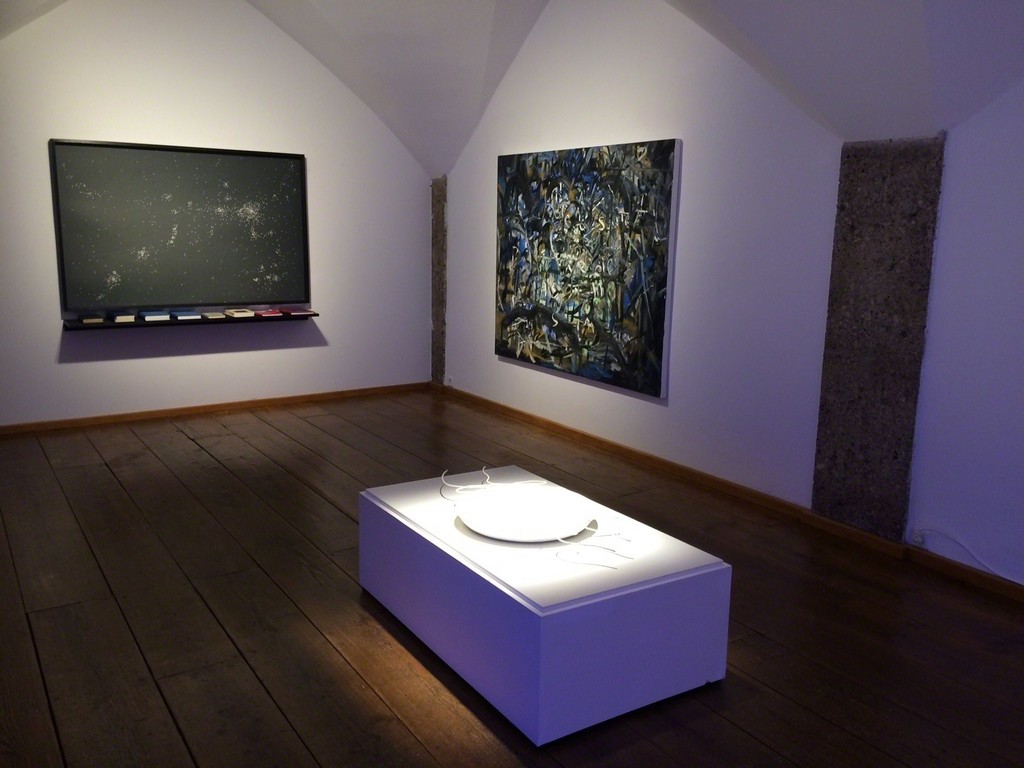 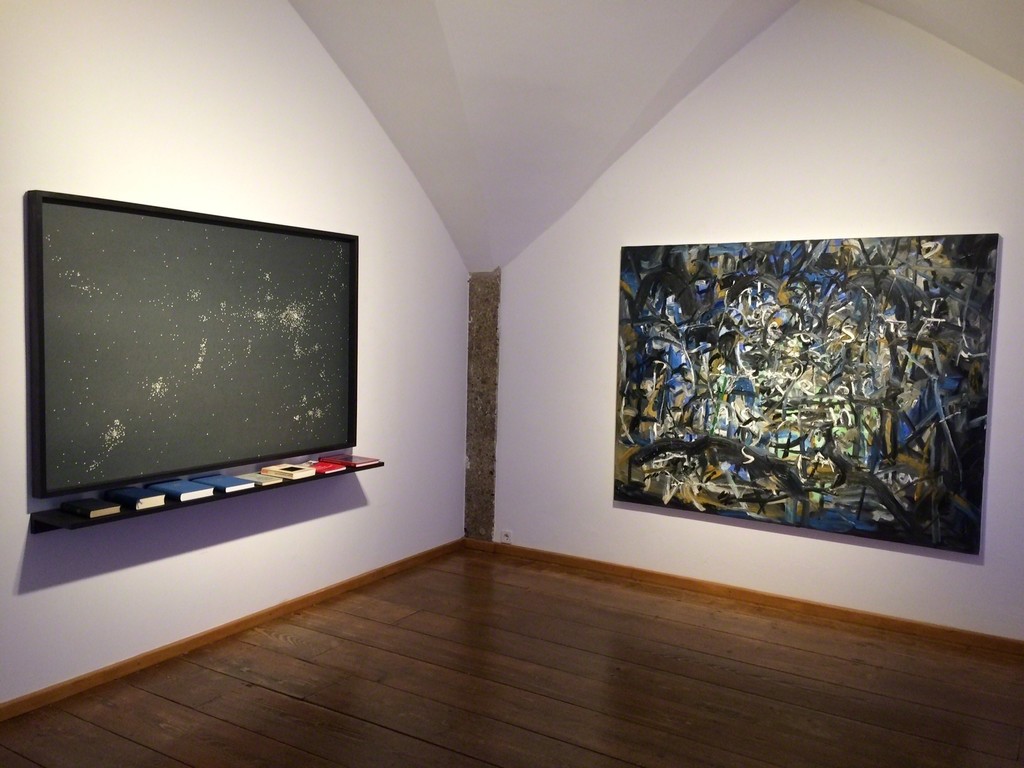 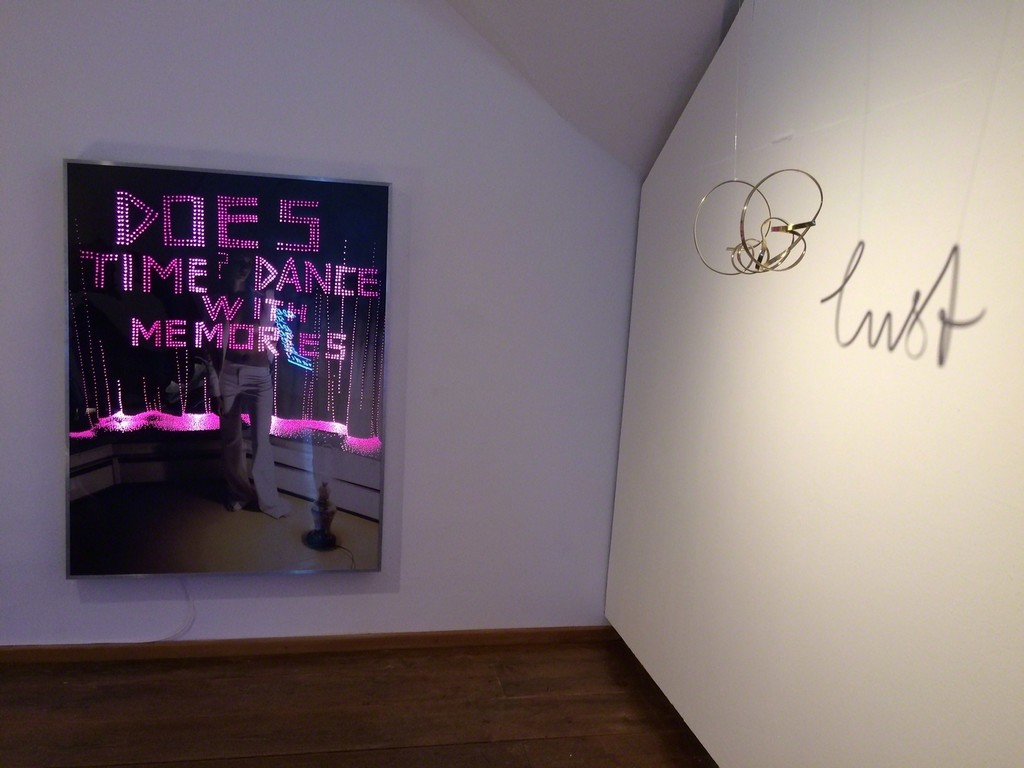 Mario Mauroner Contemporary Art Salzburg, Residenzplatz 1
Opening hours: from Monday to Saturday from 11 AM to 6 PM
or by prior agreement (+43 662 845185)

Letters and words, numbers and codes, signs and symbols — since the avant-garde movements in the 20th Century, texts and fragments of scriptures have been used in manifold ways as a form of artistic expression in paintings, graphics, collages, sculptures and installations. How words become visualized and how they serve as artistic practice is the central topic of this year’s exhibition during the Salzburg Festival at the Gallery Mario Mauroner Contemporary Art Salzburg.

As Hugo Ball captured it in his Dada Fragments (1916): “The word and the image are one. Painting and composing poetry belong together. Christ is image and word. The word and the image are crucified.” This statement not only implies that the re-emergence of the visual appearance of scripture in the avant-garde started from literature, but also emphasizes the strong bound of scripture and picture to religion.
Historically speaking, the interaction of scripture and picture has a longstanding tradition, as for example in medieval scripts and illuminations. “The picture as reproduction of scripture was a matter of course to the gothic painters, i.e. that of the Holy Scriptures,” writes the literary scholar Peter Bürger, and continues: “To the point that characters were shown in pictures, for example as banderols, which served as a medium between the transcendental and the mortal world or as banderols with the name of the portrayed saint. The change occurred in the Renaissance with the upcoming of the perspective picture-space, oriented on the viewpoint of the spectator. The image then became an illusionistic depiction of a scene.”

The division of image and scripture was long-lasting: “It was not before 1910 that cubist artists all of
a sudden began to integrate letters, scripture fragments and newspaper scraps into their work, either by painting or gluing”, as media scientist Reinhard Döhl states. They were inspired by the word-image-experiments of Stéphane Mallarmé, who was interested in the visual appearance of language, especially in regard to typography. These experiments were followed by intermedia concepts in the fine arts: “cubism, futurism, and above all the œuvre of Marcel Duchamp finally led the way to an unconstrained convergence of literature and visual art. The once established boundaries between visual representation and verbal expression began to dissolve,” Toni Stooss observes. Literature, graphics and fine arts started to blend more and more into the art movements of the 20th Century, their tendency towards intermedia approaches consolidated. Nowadays, various artists make use of letters, numbers, words, text passages and digits in such diverse ways as design element, naturally loaded with meaning.

A strong link between image and scripture arose from the emergence of abstract art, although the artists still felt the need to somehow give a comment, even though their message could mislead their viewers. A good example for this are the works by Antoni Tàpies, who puts mysterious codes in the pictures, which give indications for interpretation.

One can trace the complex entanglements of scripture and picture in all exhibited works at Mario Mauroner Contemporary Art. Language, material, light and shadow are the ingredients out of which the Belgian artist FRED EERDEKENS (* 1951) forms his characteristic sculptural objects. His artistic twisted wire creations are brought to life by the play between light and shadow: the sculptures cast shadows on different surfaces and transform to word and text fragments. The poetic shadows clearly make the ambiguity of language to subject of discussion.

BRIGITTE KOWANZ (* 1957) also prefers working with light and text. Her most significant
œuvre “Addition — Lux es lo que se ve” (2002) exposes spatially based light art. Sequences of numbers are there to be summed up, but the total of the numbers result in alphabetic characters:
a subtle play with encoding and decoding. “Light is, what you see” …

BRUNO PEINADO, born 1970 in Montpellier, confronts us with the daily flood of images.
He challenges our remembrance and awareness with reflections as well as visual and linguistic “approaches”. The familiar lettering becomes evident as an aberration on second glance only:
“Wild” Disney.

The œuvre of the swiss artist DANIELE BUETTI (*1955) consists of photography, video, sound, drawing, sculpture as well as digital-assisted media. In the 1990s he became famous for his photographic works in which he disfigured perfect beauties by adding scars, advertising slogans and logos. In his perforated large-size photographies/light boxes, Buetti also deals with the glamorous fashion world, with youth culture and the obsession with beauty by using texts in his works.

“I can remember how I used to visit these little shops with my mother in Barcelona, which used metallic curtains to protect from flies and mosquitos. I think, poetry protects us against the flies and mosquitos of life,” said the Catalan sculptor JAUME PLENSA (* 1955) in an interview. This memory exactly describes his artistic œuvre, in which the written word is of special significance. His mostly oversized figures, often formed out of a net composed of metal letters, are meditative and combine the human body with space and time. In dealing with Sigmund Freud’s writings, which again and again appear as symbols in his objects and images, Plensa also discusses social conventions and taboos.

The Austrian artist JOCHEN HÖLLER (* 1977) plays with established concepts of information transfer, classification and language systems in his “paper-works”. Thereby, he refers to Foucault’s attribution of the importance of the archive: “I am not going to describe the archive neither as the totality of texts, which are stored for a civilization, nor as the entirety of traces, which could be saved after their fall, but rather as the game of rules, which determine the occurrence and dis­appearance of statements, their short survival and their obliteration…” Höller’s preferred tool is
the scissors to cut out words, fragments and whole sentences from books and rearrange new word-orders, sentence-constructions, but also huge language-generators or fragile bookworms and more.

In his “Money pieces,” an artwork made out of original banknotes, CARLOS AIRES (* 1974 in Ronda, Malaga) refers to the excesses of our capitalist-orientated society and questions to what extend our wishes and desires are focused on material things. Furthermore, he uses political connotations for nearly all of his works.

VADIM ZAKHAROV (* 1959 Tadschikistan) is an obsessive (text-)collector. Since more than
30 years he gathers an archive of conceptual art, that comes into artistic focus again and again. Zakharov works with his collecting mania not only against the disappearance of cultural memory,
in fact he is creating his very own artistic identity: The archive becomes art to him. In his “Movies in One Drawing” he transforms and reduces famous classics of film history by projecting them onto the (projection-)screen. He then paints over the relevant accents — be it architectonical elements, textual overlays, silhouettes and so on — and hereby freezes the various moving images. Hence, the film-concentrate results from the constant overpainting of the several film-images. Text fragments are often the only textual references.

Hans STAUDACHER (* 1923 in St. Urban/Ossiacher See) is regarded as one of the most important representatives of non-figural painting and the lyrical Informel in Austria. “I work like a fencer,” says Staudacher about himself. “On the one hand very aggressive, on the other hand I try to bring poetry into my works.” Scripture and picture form a poetic connection especially in his work. In a manifest from 1960 Hans Staudacher speaks about “new painting and poetry”: “Abstract art is handwriting, color, dance, game, sign, inspiration, speech, word, excess, movement, speed. It is not transferable, not understandable, it is exuberance — and all of this because it has strength.”

The Austrian sculptor, graphic designer, photograph and media artist Hans KUPELWIESER (* 1948) repeatedly overrides the mechanism of media and material in his often room-spanning sculptures and he prefers to move within the boundaries of two- and three-dimensionality. His kinetic object
“K-Effect” seems to withstand the laws of optics. “The mirror is not only bent concavely, but also possesses an additional curvature. The artist discovered this optical phenomenon by accident: ‘The effect isn’t described in the literature,’ said Kupelwieser. And so he names it without further ado after himself: K for Kupelwieser-Effect.” (Michael Ortner)

The overlapping of scripture and picture in the present context is from extraordinary diversity and furthermore well-known in the mass media. Nevertheless, the question of decipherability arises. Superficially, scripture and language is easier to unravel than a picture. “Language is the most complete tool to create as well as to destroy meaning. Playing with words is a wonderful mechanism, because in the same sentence we praise the meaning of language only to question it shortly after,” said Octavio Paz. The works on the issue of scripture and picture vary in genre and media.
They are exhibited in the exclusive ambience at Mario Mauroner Contemporary Art Salzburg (Residenzplatz 1) and invite you to a special encounter with contemporary art.