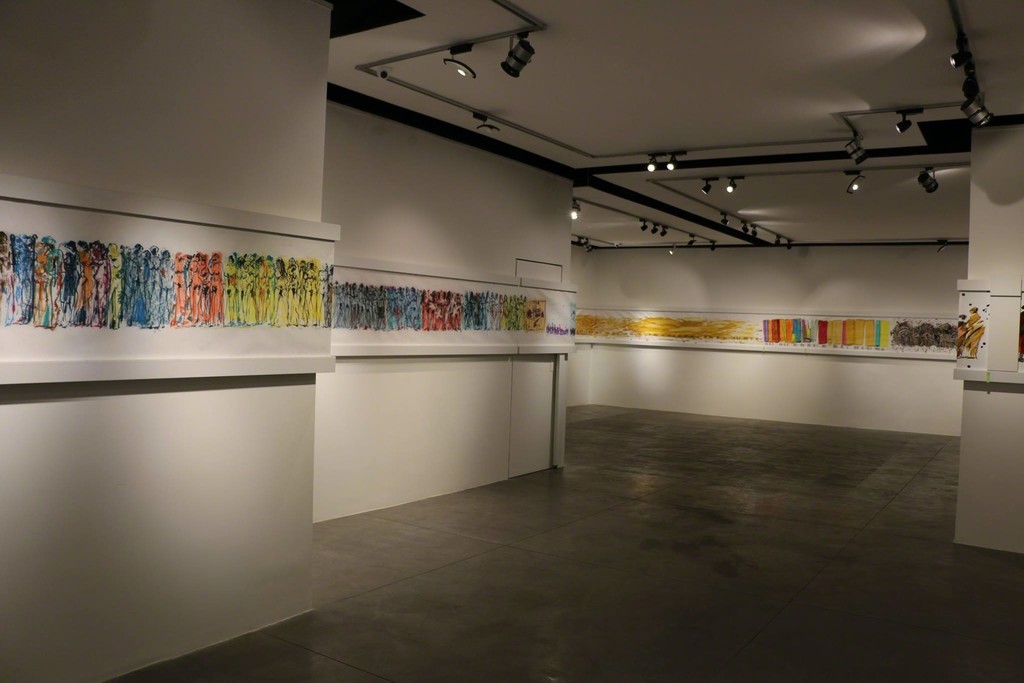 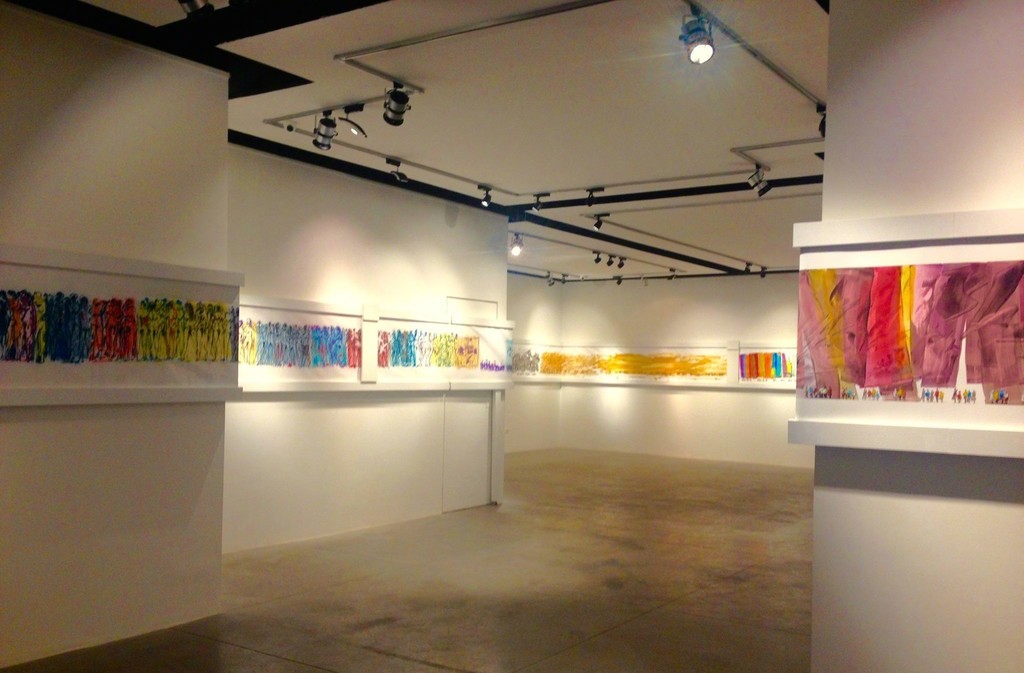 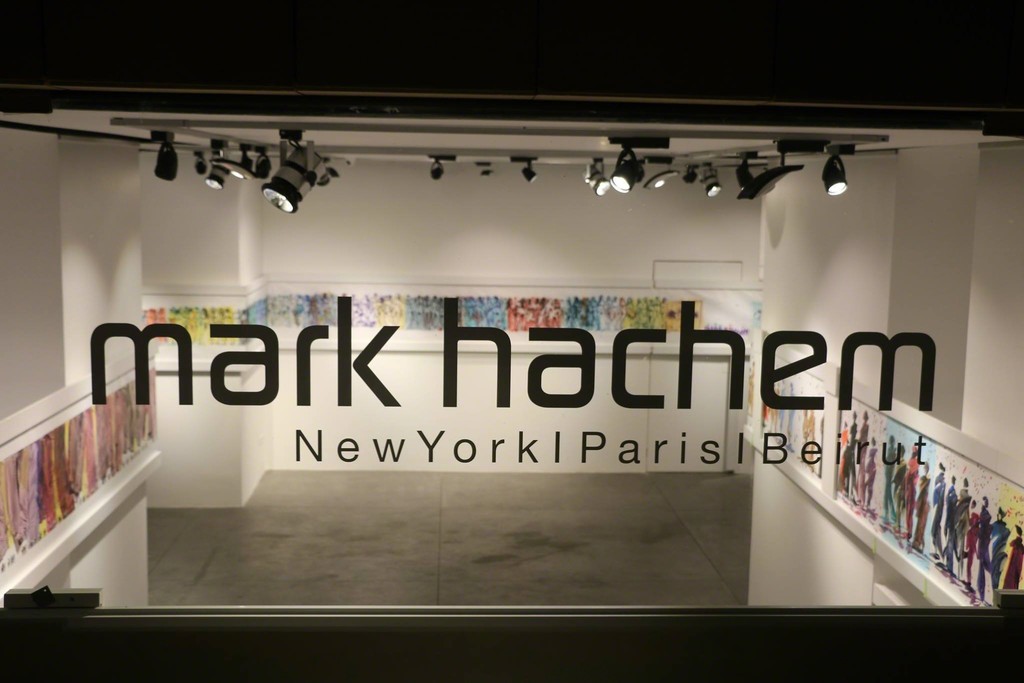 Mark Hachem Gallery is honored to present ‘Artworks on Paper Cut to Order’, a happening installation by the artist Chaouki Chamoun, derived from the artist’s architectural background. An unchained flow of masterpieces unwinds on a paper roll, unveiling at each step a surprising revelation. While, traditionally, the conception and realization of the artwork is confined to the privacy of the artist’s studio, who measures, cuts, and frames what would be an aesthetically unique entity, Chaumon calls on to the spectator, inviting him to engage in the artistic process.

This unprecedented formula invented by this architect artist, is both an installation within the artwork, and a potential ‘Happening’ with a social and aesthetical dimension. The outcome reveals more about the audacious personality of the artist, even when his main concern is the involvement of the ‘other’. Withunique manual skills, Chamounconveys his love for art and mankindin a strikingly original way, overstepping any aesthetical, moral and physical boundary.

An ever-expanding crowd of female nudes, elegantly dressed men, knights with their backs turned against the viewers; a storm of colors, of threatening monochromes, and “mythical landscapes” miniaturized – all this unfolds before the spectator’s eyes, marked by the rhythm of a fake chronology,all unified by a pseudo narration. What is ultimately revealed is the classical ‘Chamounian’ composition, where the characters are confined to the lower edge of the paper, while the deceiving absolute pervades the space above. An illustrated parchment paper, recounting a mysterious story through an innovative figurative calligraphy. All conveyed with a touch of lyricism and discrete elegance.

The artist’s individuality is questioned, as the ownership of the artwork is extended to a multitude of people sharing different social, financial, cultural and religious backgrounds. The aesthetic judgment is left to chance, to the spectator’s sensitivity, to the ‘other’, who determines the fate of the artwork guided by his own cultural curiosity.

BIOGRAPHY
Born in Lebanon, in 1942, Chaouki Chamoun received his Diploma of Higher Studies from the Fine Art Institute at the Lebanese University in 1972. In 1975, he graduated with a Master of Fine Arts from Syracuse University, N Y. Between 1975 and 1979 he was a full time fellow at the PhD program at New York University, NY concentrating on Aesthetics and Studio Art.

Chamoun has had over thirty One-Man Shows since 1975, exhibiting in New York, Beirut and other cities in the United States, Europe, Hong Kong and the Arab World. He has also participated in over fifty group Art Shows and biennales since 1968 including the Rochester Memorial Museum (1974), theSoursouk Museum in Beirut (1984-2008), Sotheby’s Exhibit and Auction in London (Oct.2007), and Christie’s Exhibit and Auction in Dubai (Oct. 2007).

His work is internationally acquired, and heavily reviewed. He is also featured in several art books and his book “The Art and Life of Chaouki Chamoun” was launched by SAQI in London, 2013. Chamoun taught art at several universities since 1974 in Lebanon and the USA, also pursuing a career as an acclaimed interior architecture designer, collaborating with major New York design firms.His high-end projects include Saks Fifth Avenue, Bloomingdale, Jordan March and Dressbarn in New York, Washington, Chicago, and sanFrancisco.

Chaouki Chamoun registered a distinguished record sale for a living Lebanese artist at Christie’s at the auction in 2007, and Art Price ranked him in the top 50 newly auctioned Artists worldwide. In its 2011 ballot, the ‘Arabian Business Magazine’ named him one of the power 500 most influential professionals Arab in the World. Notably, his works have been generously acquired in several charity auctions since 2008 benefiting students and children in educational, health and social institutions in Beirut and other Arab cities, among others the Lebanese American University, Brave Heart, Tawasul,andSeri-Art.