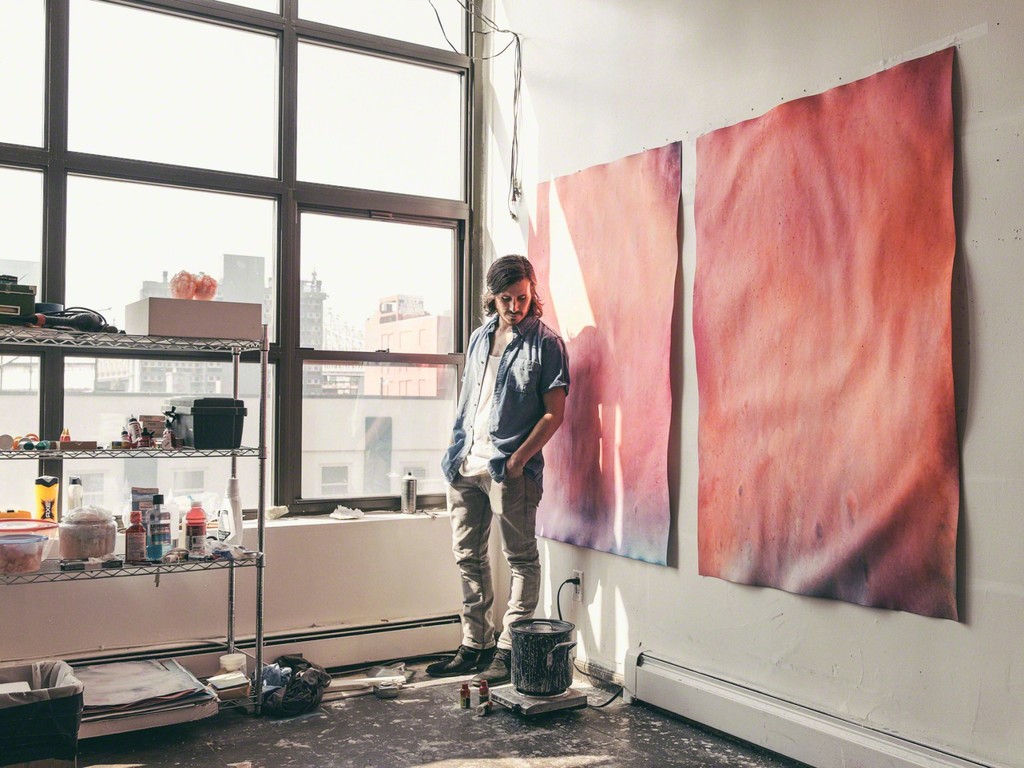 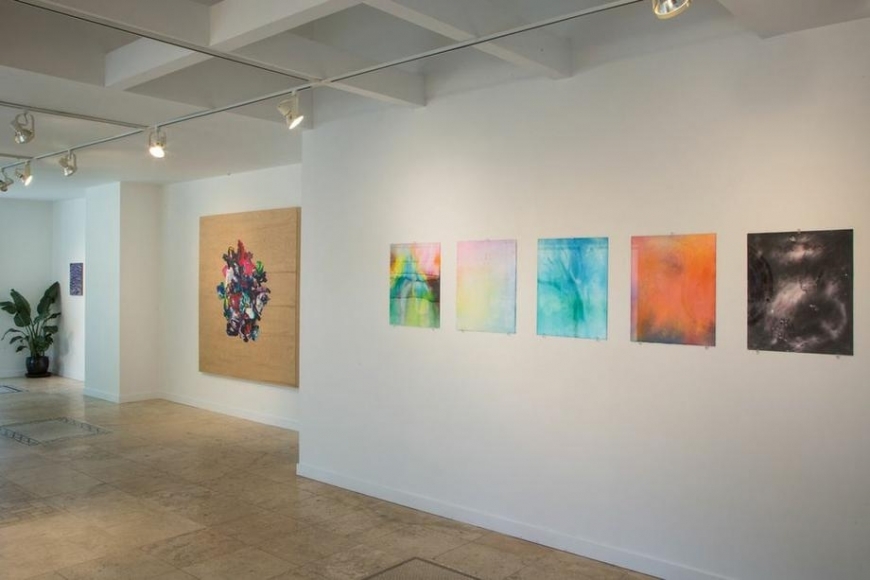 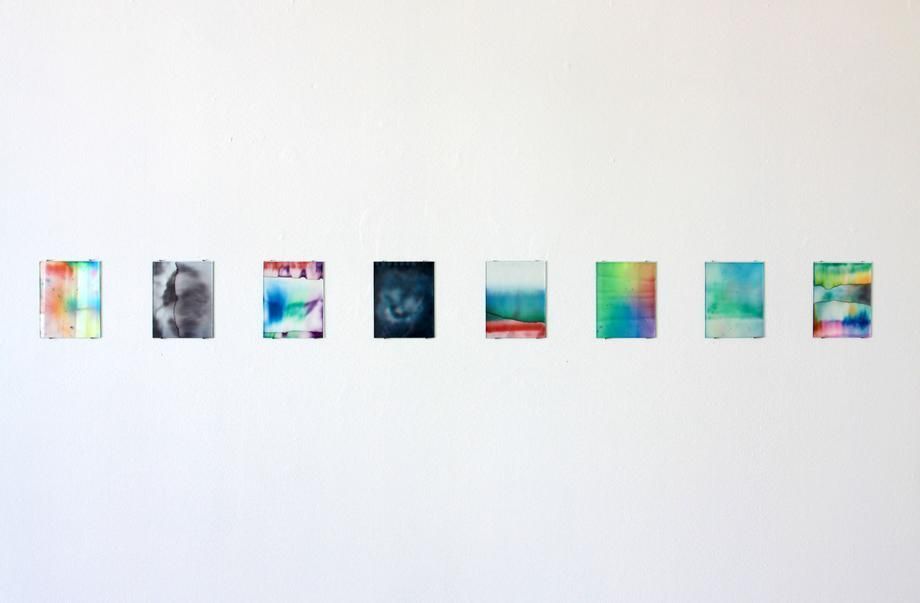 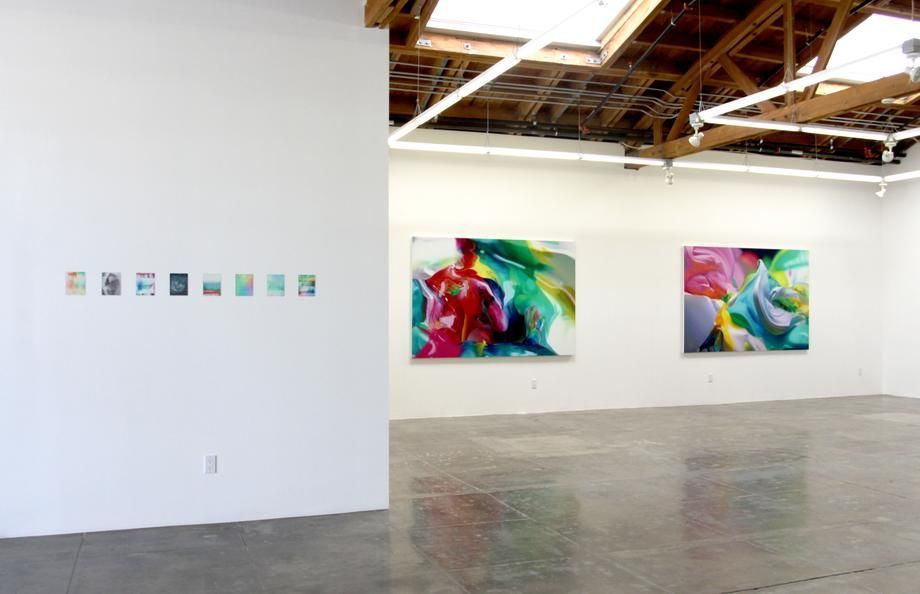 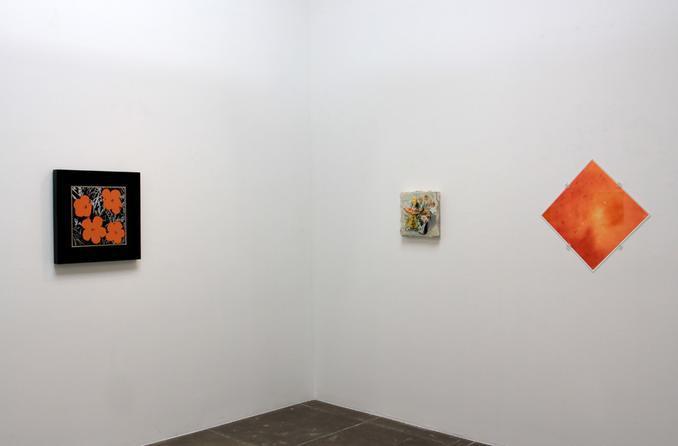 Mark Moore Fine Art is proud to present "Altered States," an exhibition focusing on Ben Charles Weiner's mixed media drawings. Illuminating a lesser-known aspect of the artist's practice, "Altered States" presents new drawings, along with earlier works that serve as precedents. In these works, Weiner engages with household products at a physical and chemical level. The drawings use principles from gelatin sliver printing to record an imprint of the chemical reactions between inks and drugs (both legal and illegal), expanding upon Weiner's practice of synthesizing process painting and photorealism.

Weiner begins his drawings by coating a sheet of Chromatography paper in a single color of ink. This heavy-cotton lab paper is used in forensics and art conservation to determine the identities of chemical substances. Weiner mixes a solution of a respective drug into a pan of water, using substances such as Aspirin, Codeine, Molly, Marijuana, 5-hour Energy and Vodka. He then soaks the ink-coated paper in this solution, letting the drug break the ink down into a surprising array of prismatic patterns to create, in Weiner's words, "a material embodiment of altered perception." Weiner soaks and re-soaks the paper as many times as necessary to arrive at an image he finds compelling, resulting in works that meld painterly action with chemical reaction.

Weiner anchors his investigation with formal allusions to historical movements including Monochrome and Colorfield painting, and in doing so sheds new light on these movements. His drawings begin as literal Monochromes, and it could be said that once soaked in drugs, they remain Monochromes, albeit seen through the lens of their respective drug. Where Monochrome painters such as Yves Klein isolated pure color as an experience unto itself, Weiner's drawings position perception itself as a medium, to be manipulated through drug use.

Indeed, the luminous, hazy fields of chemical color in Weiner's drawings beg the question of whether altered experience is inherently abstract. In "The Doors of Perception," Aldous Huxley postulates that drugs break down filters that organize, and give form to, an otherwise overwhelming flood of abstract visual information absorbed by our senses. Mark Rothko's paintings could easily support this, given his well known appetite for anti-depressants and alcohol.

However, Weiner draws no distinction between legal and illegal drugs in his choice of substances. Thus, he positions drug-use not an escape from reality, but as a behavior integrated into our daily routines. In this sense, the drawings reflect his conceptual interest in the relationship between consumerism and mortality within daily consumption routines, and our daily struggle to resist the entropic forces that pull at our mortal selves.

Weiner (b. 1980, Burlington, VT) received his BA from Wesleyan University (CT). He also studied under Mexican muralist José Lazcarro at Universidad de las Americas (Mexico) and has worked closely with artists Jeff Koons, Kim Sooja and Amy Yoes as an assistant. He has exhibited his work widely across the United States and in Mexico with solo shows in Los Angeles, New York and Puebla, and group exhibitions in Chicago, New York, Miami, New Haven, Ridgefield, Los Angeles and Riverside. His paintings can be found in the Sammlung/Collection (Germany), the Progressive Collection (OH), The Microsoft Collection (WA), and the Frederick R. Weisman Foundation Collection (CA). The artist lives and works in New York City.

For additional information on Ben Charles Weiner, please check out our website at: