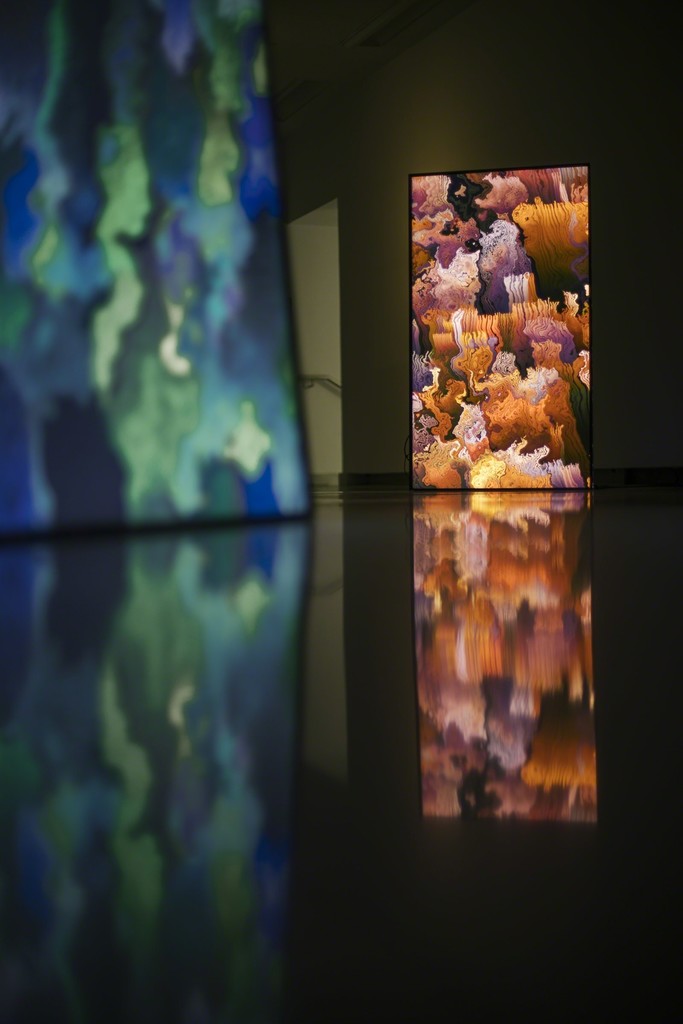 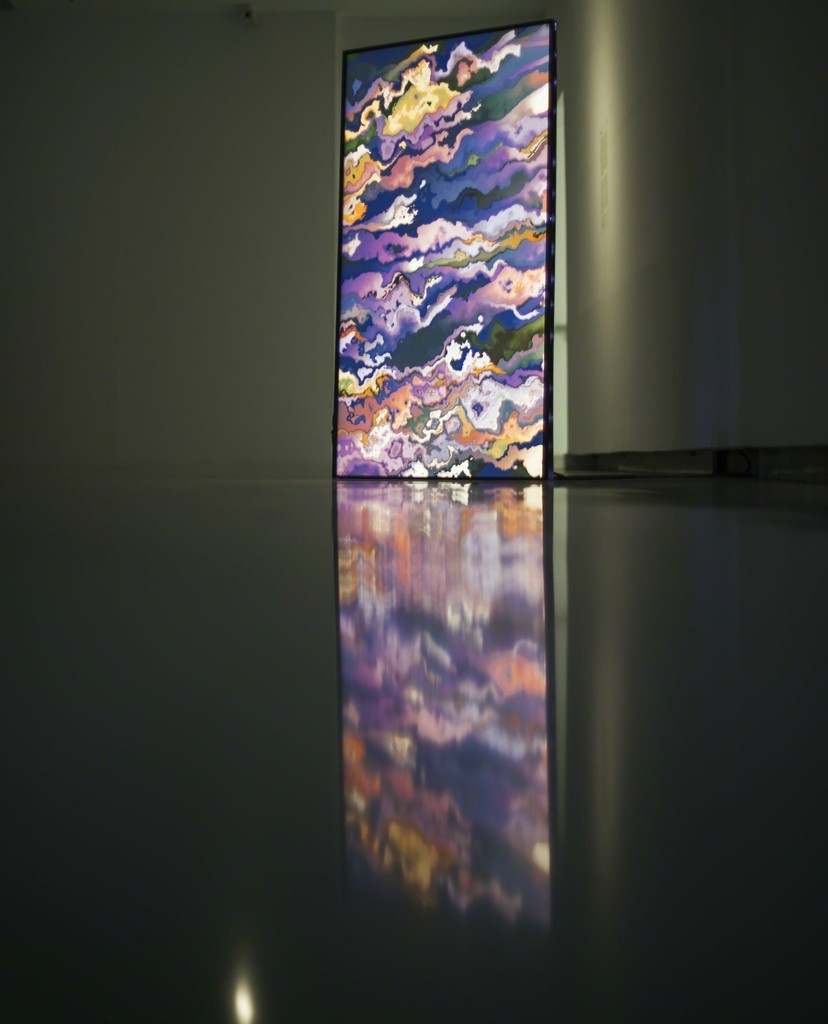 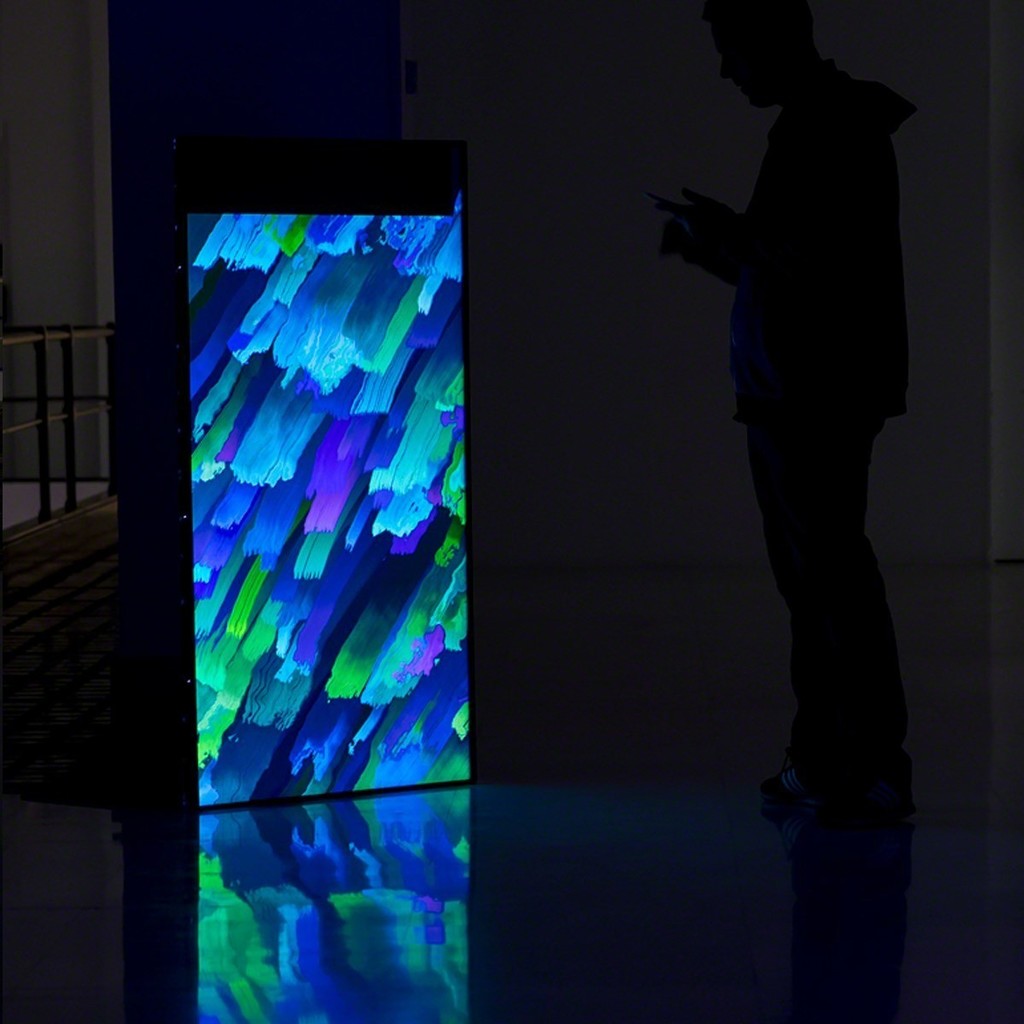 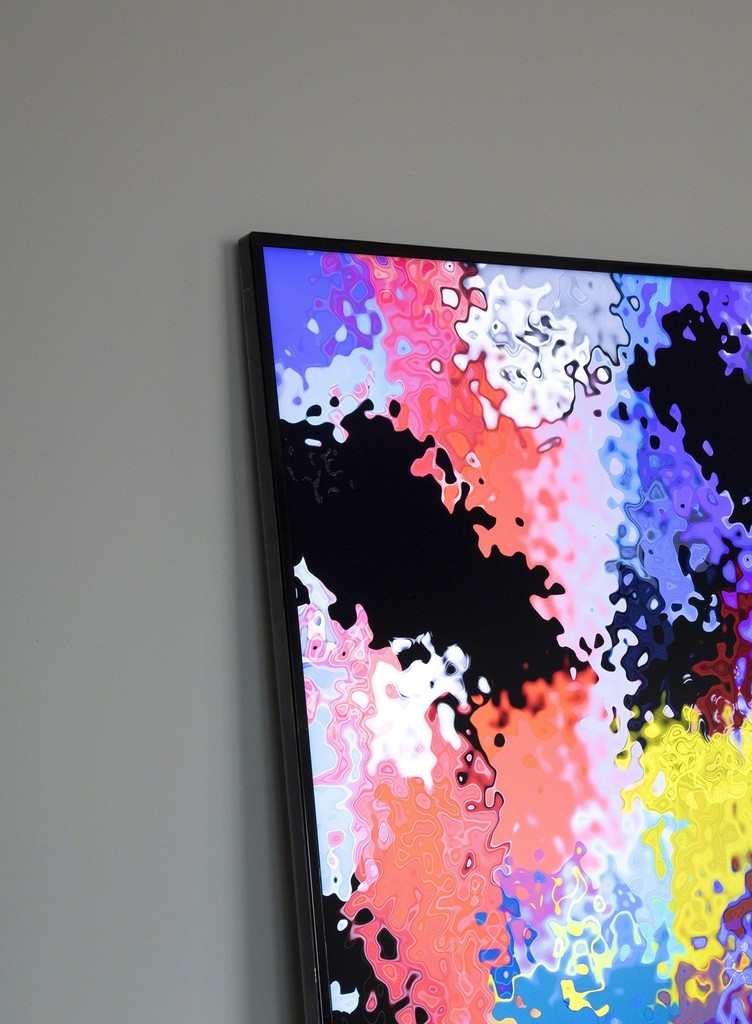 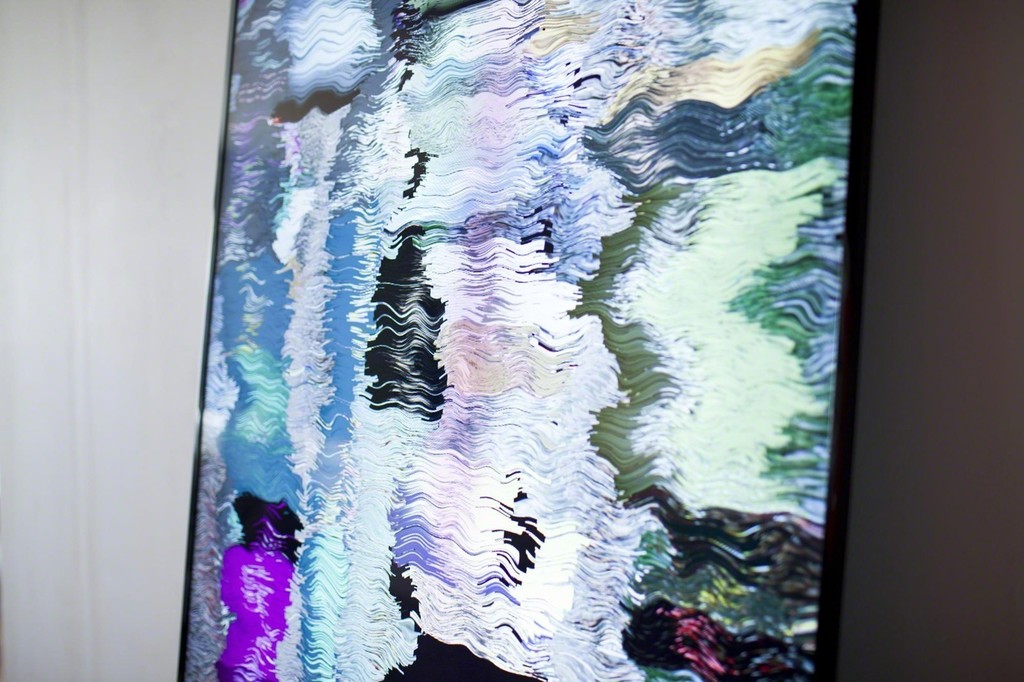 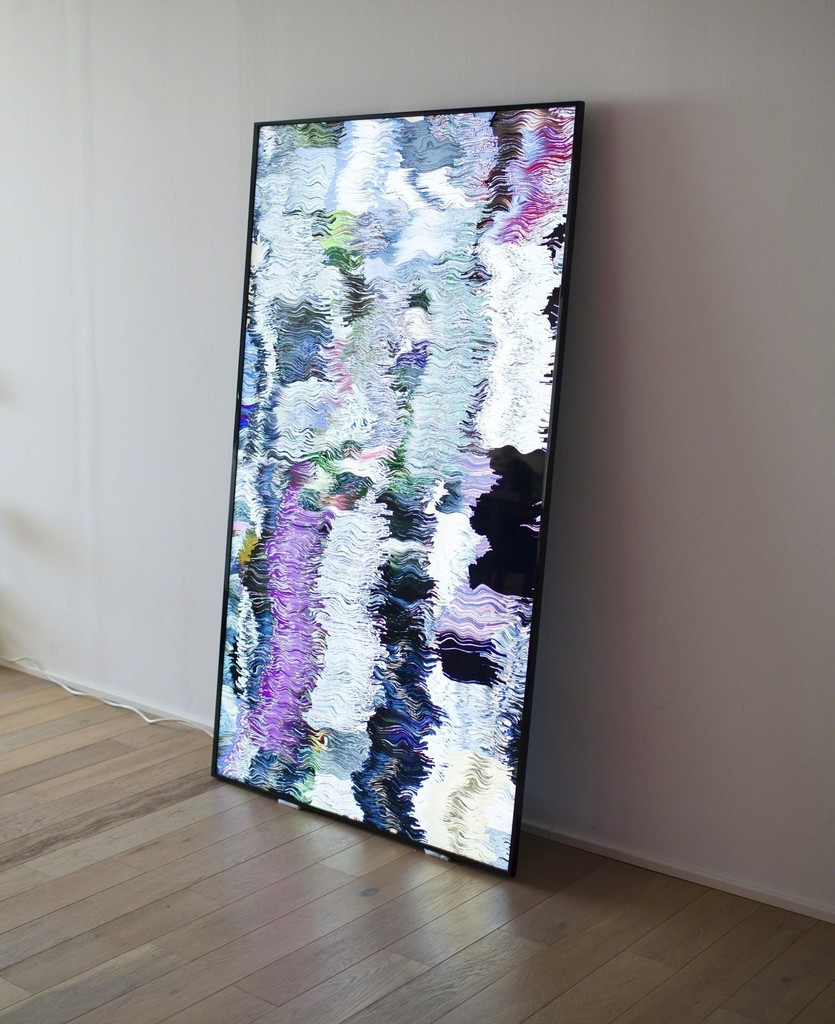 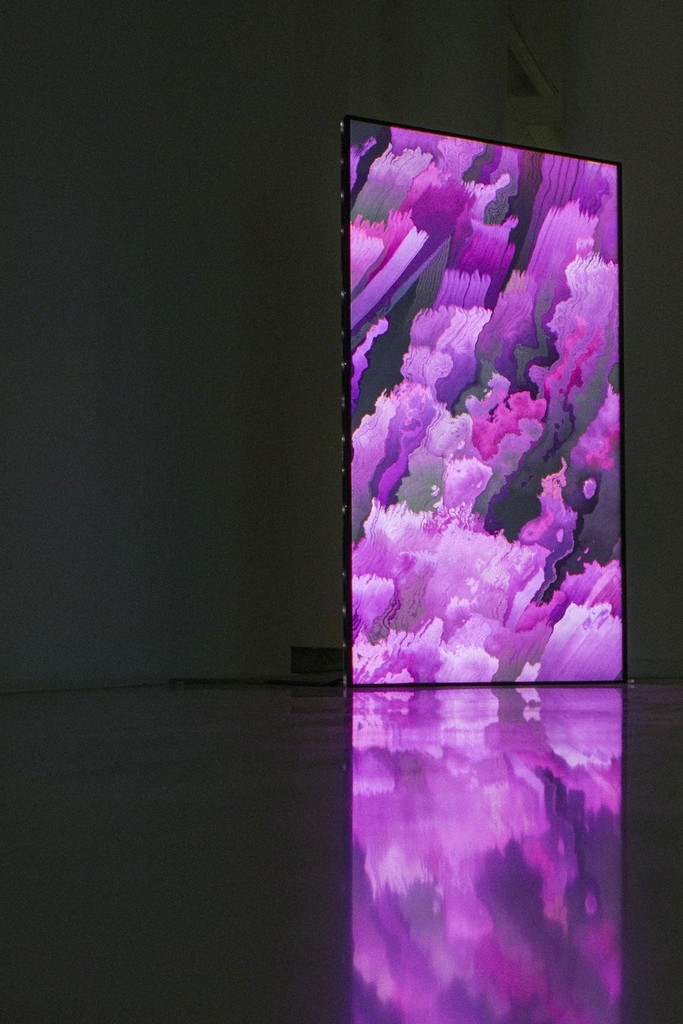 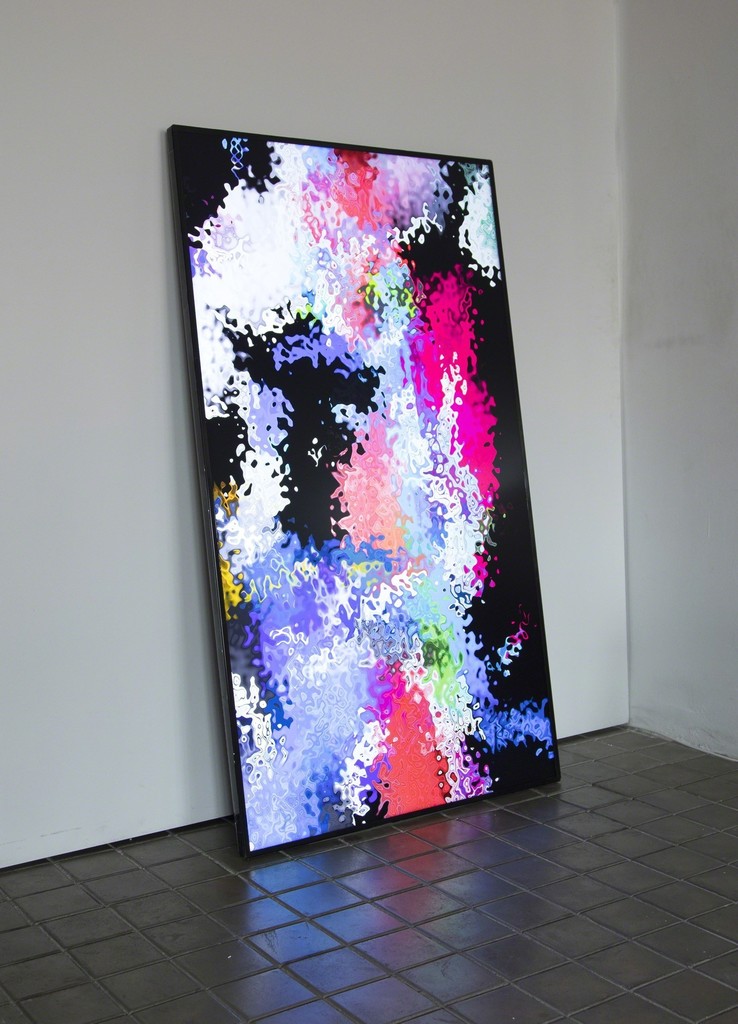 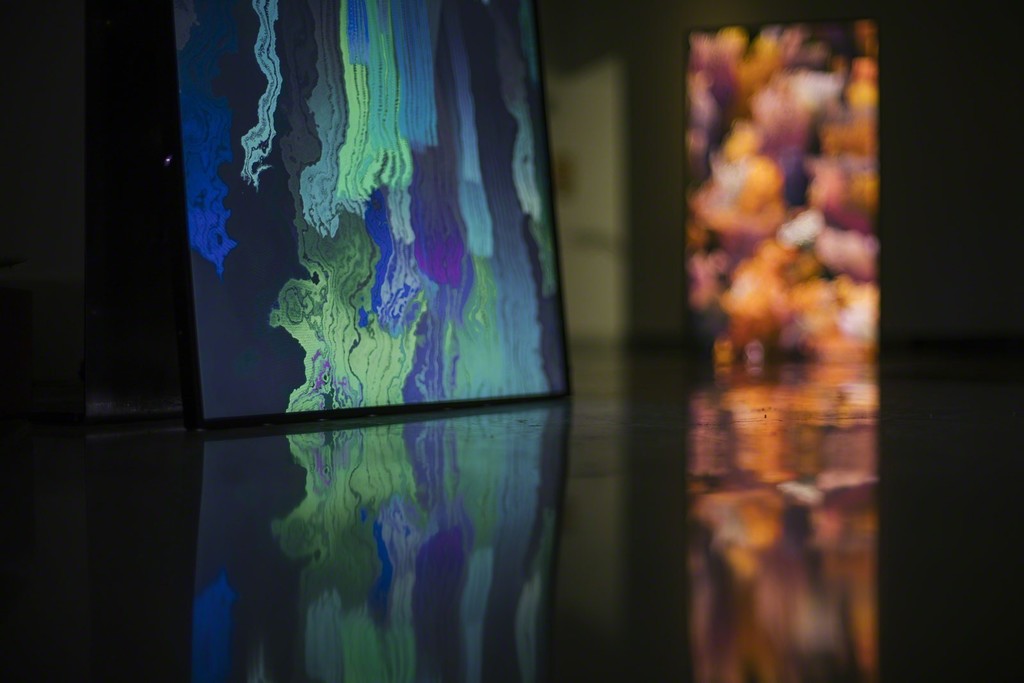 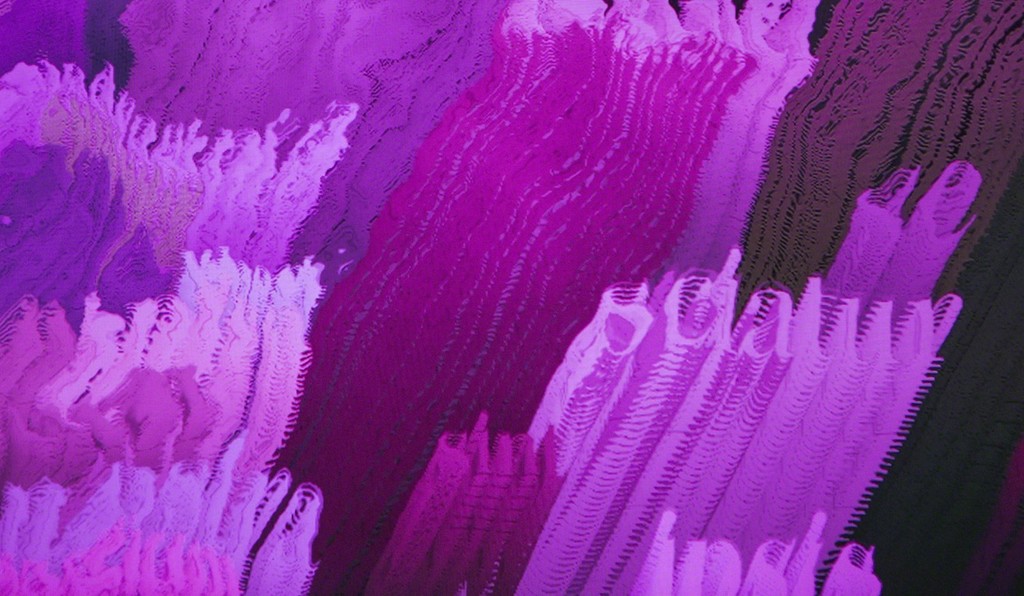 Daniel Canogar’s recent works riff off painterly abstraction. However, the palette of these artworks is not painting, but rather data. He creates generative electronic animations that are constantly mutating; connected to the Internet, they use live feeds to capture the incessant flow of information that has flooded our world. The artworks attempt to give face to the immaterial yet ubiquitous presence of data that has crept into our lives in more ways that we can imagine. This expanding data-driven universe affects how we gather information about the world, determines our economic livelihood, and tracks each and every one of our online activities.

Canogar’s artworks are not data visualization tools, but rather artistic reinterpretations of electronic information. Cannula invites users to create liquid compositions using YouTube queries. Ripple is connected to news web pages and downloads videos from these outlets as they come online. The resulting artwork is a textile-like animation created with the news of the day. Ooze melts logos from the companies that form the NASDAQ index fund, creating a dynamic animation determined by the ascending and descending market value of the traded companies. The Draft Series uses texts from foundational documents of our democratic system – the US Constitution, the Declaration of Human Rights and the Magna Carta - and distorts them with real-time wind data of the cities where these documents where signed. All these artworks resort to abstraction to capture the unrelenting excess of this new algorithmic reality.

Born in Madrid (1964) to a Spanish and an American mother, Daniel Canogar´s life and career have bridged between Spain and the U.S. Photography was his earliest medium of choice, but he soon became interested in the possibilities of the projected image and installation art. His fascination with the technological history of optical devices, such as magic lanterns, panoramas and zoetrope, inspired him to create his own projection devices. Fox example, in the late 90s he created a multi-projection system with fiber optic cables. The resulting artworks were mobile-like hanging sculptures that projected images onto surrounding walls.

With the advent of digital technology, the artist continued re-conceptualizing visual media as sculpture. By projecting video animations onto salvaged obsolete electronics, he was able to metaphorically reveal the collective dreams trapped within DVDs, old calculators, video-game consoles or found computer hard drives. Also notable are Canogar´s public artworks using flexible LED screens. Like with his earlier fiber optic cable installations, he once again reinvents an existing technology to suit his artistic explorations; by using flexible LED tiles, he is able to create twisting ribbon-like screens for atriums and public spaces.

In a recent artist statement, Daniel Canogar describes his work in this way:

"Memory, and its loss, is a central theme in my work. Unless we remember, we are condemned to an amnesiac present, texture-less and flat, lacking the perspective of time. My recent artwork tackles such issues in different ways. I have scoured junkyards, recycling centers and flea markets, looking for examples of aging technologies that defined our existence in the not-so-distant past. What we throw away holds an accurate portrait of who we were. VHS tapes, 35 mm film, hard discs, CDs, to name just a few obsolete mediums that I have used in my art, are all depositories of our memories. When tossing them out, we are also discarding an important part of ourselves. By projecting video animations onto old media, I attempt to reignite life back into them so as to reveal the shared memory they hold within."

"I have also projected large-scale video animations on emblematic monuments and historic buildings in cities across the globe. I contact local communities and create events that allow participants to project themselves literally, and metaphorically, onto their surroundings. In this way they claim the history of their city as their own. Using green-screen technology, I often record performers acting out climbing motions that when projected onto a building’s façade, create the illusion of their ascent to the top. By “conquering” these buildings, they become active participants of a shared history, rather than mere spectators of an urban reality."

"I like to break away from the confines of the flat screen and create three-dimensional installations that conceptualize media as sculpture. My LED screens are clear examples of this approach. After years of research, I have developed a flexible LED tile that allows me to create screens with complex curving shapes. Thus, I can make screens that bend and twist and respond to the specific features of the architecture that contains them. These works invite viewers to seek out multiple perspectives in discovering the artwork, incorporating their movements in and around the work as a crucial component of their experience. To be a spectator all too often means to remain on the sidelines of what we are watching. I want my artwork to activate an engaged viewer, one that experiences seeing as grounded in a moving sentient body. With this full-bodied gaze, I believe we not only have a richer experience of our world, but are also able to claim a place in it for ourselves."

Canogar has created numerous public art pieces, including Tendril, a permanent sculptural LED screen for Tampa International Airport; Travesías, a sculptural LED screen commissioned for the atrium of the European Union Council in Brussels; Constelaciones, the largest photo-mosaic in Europe created for two pedestrian bridges over the Manzanares River, Madrid; and Asalto, a video-projection presented on various emblematic monuments including the Arcos de Lapa in Rio de Janeiro, Union Station in Toronto, Puerta de Alcalá in Madrid and this church of San Pietro in Montorio in Rome.

His recent work includes "Fluctuations" at Sala Alcalá 31, Madrid; Storming Times Square, screened on 47 of the LED billboards in Times Square, New York; "Echo", a solo exhibition at bitforms, New York, and Max Estrella Gallery in Madrid; "Vórtices", an exhibition exploring issues of water and sustainability at the Fundación Canal Isabel II in Madrid and Synaptic Passage, an installation commissioned for the exhibition "Brain: The Inside Story" at the American Museum of Natural History in New York.

Daniel Canogar received an M.A. from NYU ant the International Center for photography in 1990. He presently lives and works in Madrid and New York City.

You can find additional available works now available by this artist and prices on our ARTSY website at: www.artsy.net/mark-moore-gallery

For more information on this work and the Mark Moore Fine Art resale art program please check out our website: www.markmoorefineart.com