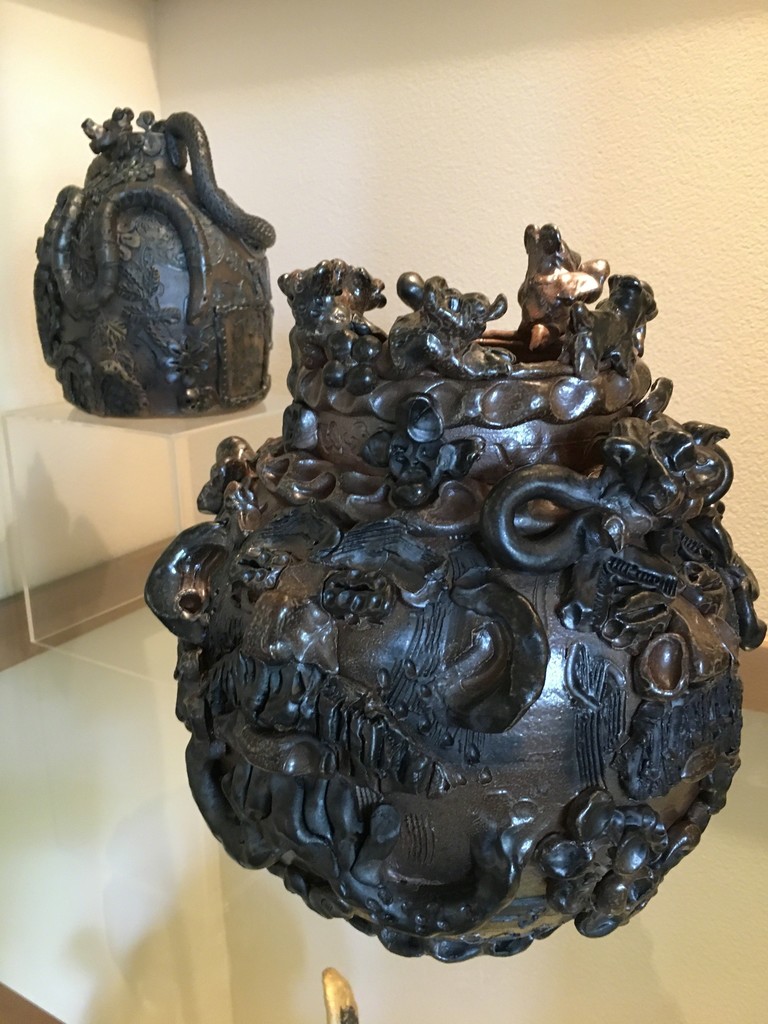 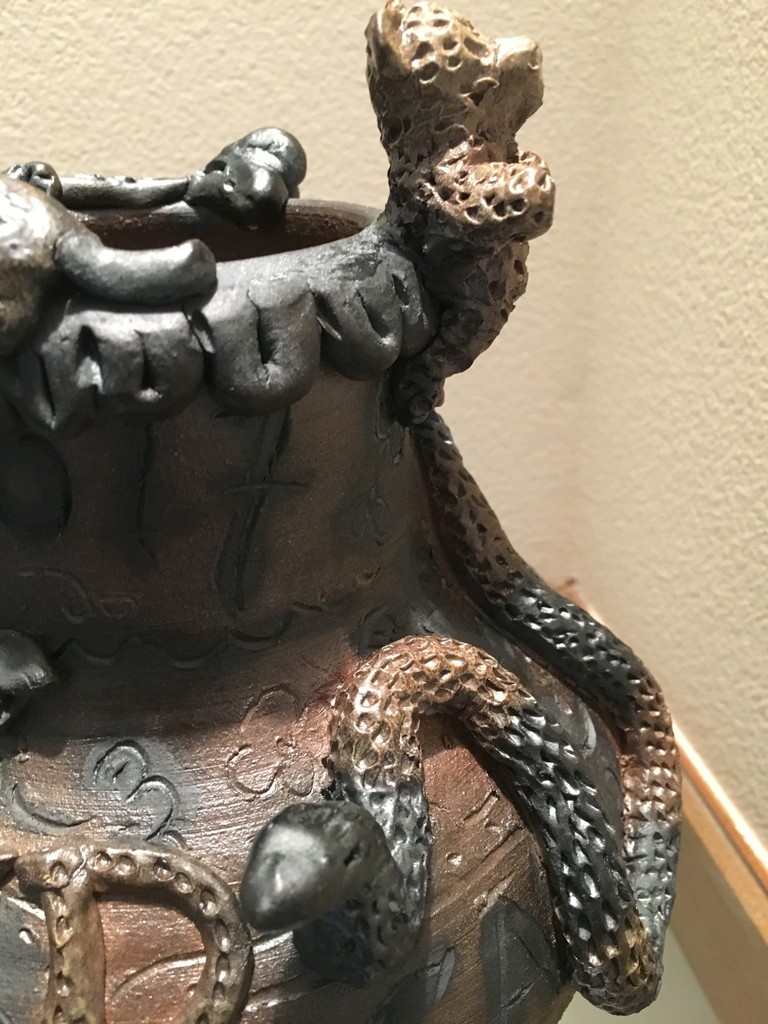 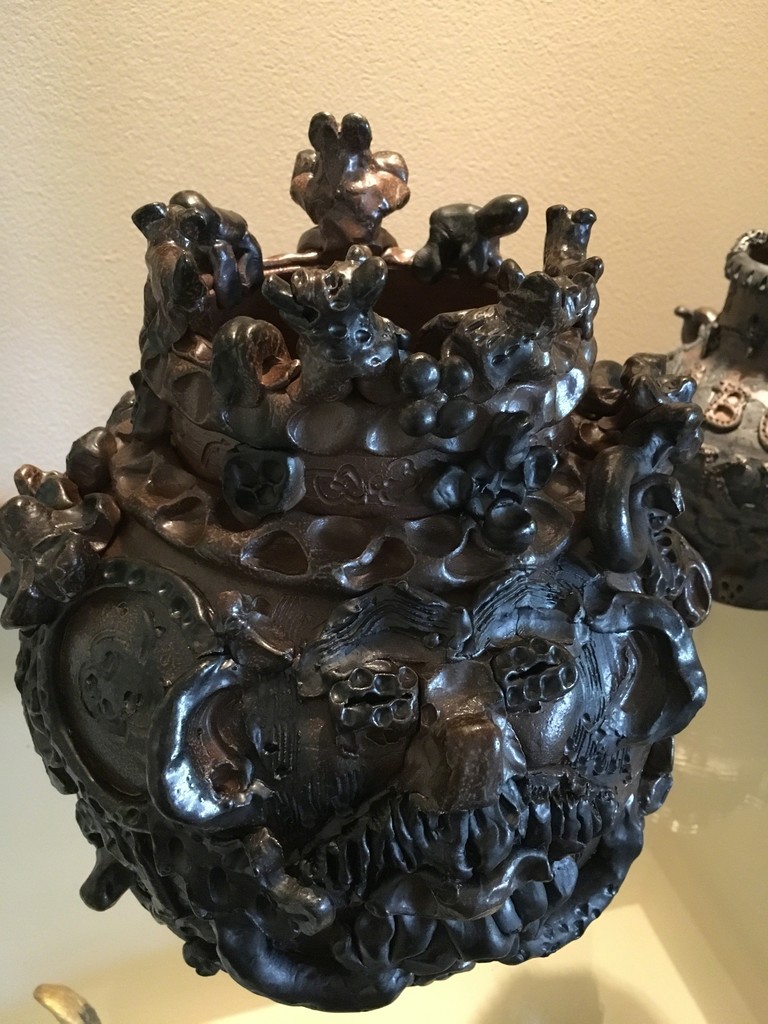 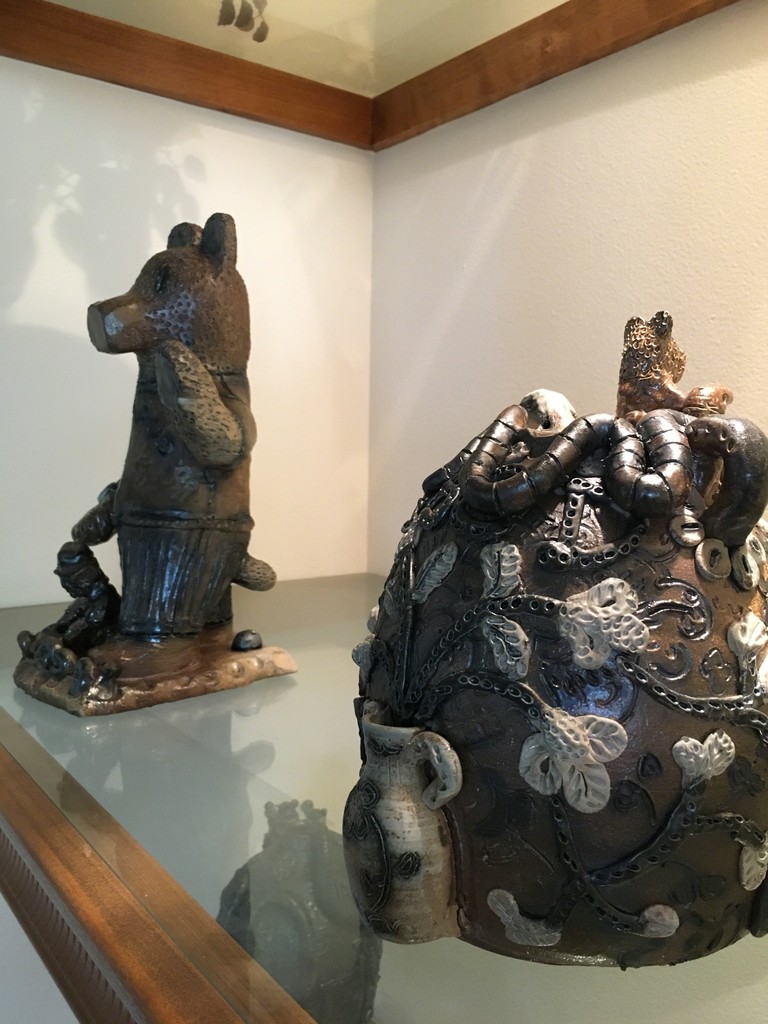 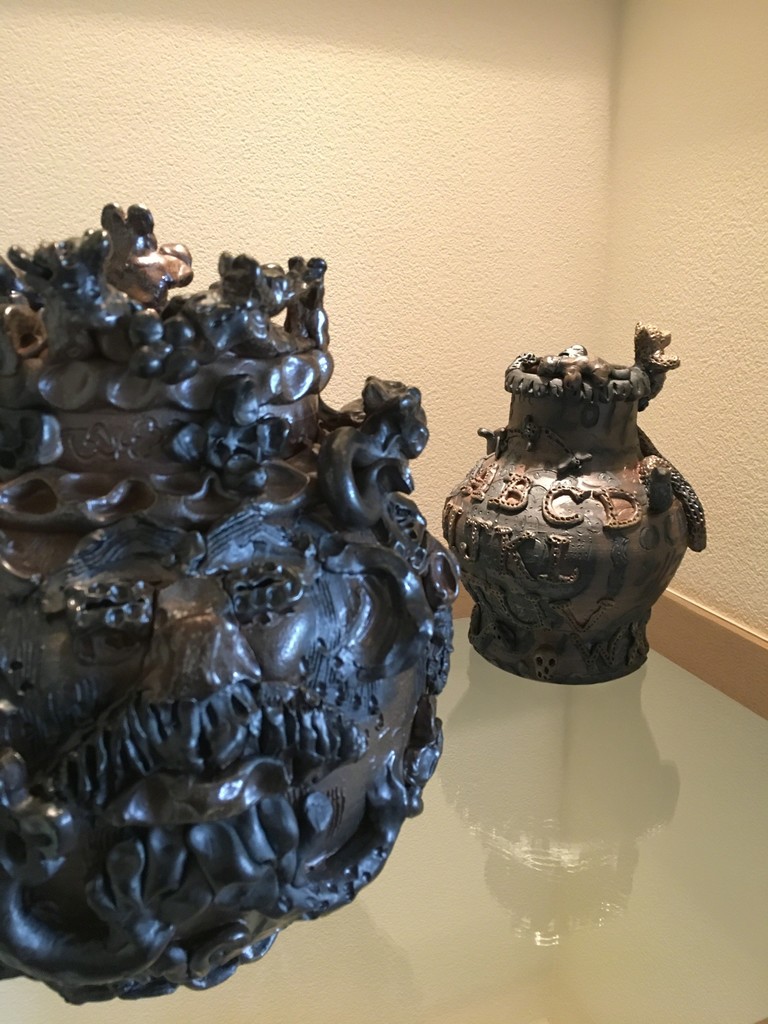 JEFFRY MITCHELL's art radiates with a charming appeal, marked by an exuberant abundance of forms, materials, and techniques. From his earliest experiments with resin and paper to his extended engagement with ceramics and his latest multi-part installations, Mitchell has consistently investigated the decorative and the theatrical and blurred distinctions between art, craft, and functionality.

Mitchell has developed a distinctive visual language full of symbolic characters like alphabet primers, flowers, elephants, bears, and other flora and fauna. What might first appear as child-like sweetness or nostalgic sentimentality quickly gives way to complex emotional content and deeper narratives that touch upon his identity as a creative artist and gay man as well as his working class Catholic background. Mitchell also responds to specific aspects of the history of art, craft, and visual culture. He fashions sophisticated twists on sources as diverse as Chinese funerary sculpture, folk art, Russian Constructivism, watercolor nature illustrations, and modernist assemblage.

Jeffry Mitchell was born in 1958, the fourth of nine children of working-class parents. After experiencing a largely itinerant childhood owing to his father’s career, Mitchell continued this nomadic lifestyle in his young adulthood. Although his family eventually established a somewhat permanent residency in Seattle, he decided to attend the University of Dallas in Irving, Texas, and spent a semester in Rome, an experience that had a profound effect on his work. After graduating with a BA in painting, Mitchell moved to Japan to teach English and landed an apprenticeship with a production potter in Seto (known as one of the “Six Old Kilns” in traditional Japanese pottery). Impressed and changed by his experiences abroad, Mitchell returned to Seattle in 1984 and enrolled in a printmaking class at the Cornish College of the Arts. This spurred his decision to pursue an MFA in printmaking at the Tyler School of Art, Temple University in Philadelphia. During his studies he returned to Rome, setting up a studio in the basement classrooms at Villa Caproni. Notable solo exhibitions of Mitchell’s work include: Like a Valentine: The Art of Jeffry Mitchell, 2012-2013, Henry Art Gallery; Some Things and Their Shadows, 2009, Kittredge Gallery, University of Puget Sound, Tacoma, WA; Shiny Happy Pretty (with Tina Hoggatt), 2008, Missoula Art Museum; Hanabuki, 2001, Henry Art Gallery; My Spirit, 1992, New Museum of Contemporary Art, NY; and Documents Northwest: The Poncho Series, 1990, Seattle Art Museum.

Among contemporary artists from the Northwest, Jeffry Mitchell stands as a major figure in ceramics, sculpture and drawing. As stated in a recent review in WHITEHOT magazine on his recent retrospective:

“Beyond the intricacies of influence informing Mitchell’s work, the thing that strikes you at this retrospective is how auteur-like the artist is. A real Renaissance man, Mitchell makes every medium his plaything, literally, and not without grace.”

“People like to describe his effortless touch as “casual.” Despite the fact that plenty of effort obviously goes into the production of each piece, the handmade ease is exemplary of a deliberate, regional brand of romanticism that champions Ruskinian anti-industrialism. Sure, it’s a cliché, but it’s a genuine sensibility that shies away from fussy finish and slickness and embraces the political potential of art forms that champion rather than shy away from the cheesy associations of craft. We’re not talking the glass factory gloss of Chihuly. Rather, Mitchell’s kind of craft speaks a language of touch (handmade) that’s emphatically personal and communal. His practice is a metaphoric laying on of hands, and essentially one of transubstantiation, turning raw material into something spiritual by pushing the psychological, human softness of craft to its limits. Lumpy, erotic pottery imprinted with his message (his massage) is merely the tip of the iceberg. Typographical alphabets written on vellum are watery and hand-lettered, like an illicit note. Installations illuminated by the dull blaze of naked lightbulbs shining through paper cut-outs look like lo-fi gobos casting whispered sweet-nothings at a wall. “HELLO HELLO” they say. Always, Mitchell extends an invitation to engage. (“HELLO HELLO” is iterated over and over in his pieces like a mantra. Like a valentine.) This is why everyone is ensorcelled by Jeffry Mitchell.”

View highlights of this Portland Art Museum Artist Talk in which Jeffry Mitchell discusses Bear-shaped vessel by an unknown Chinese artist at this LINK.

This video features contemporary artist Jeffry Mitchell. Mitchell is one of many prominent Northwest artists represented in the Henry Art Gallery's permanent collection at this LINK.

In addition, I have taken the liberty of placing all available work on the Mark Moore Fine Art ARTSY webpage for easy reference. You can find all the details and images of all the Mitchell works currently available at: