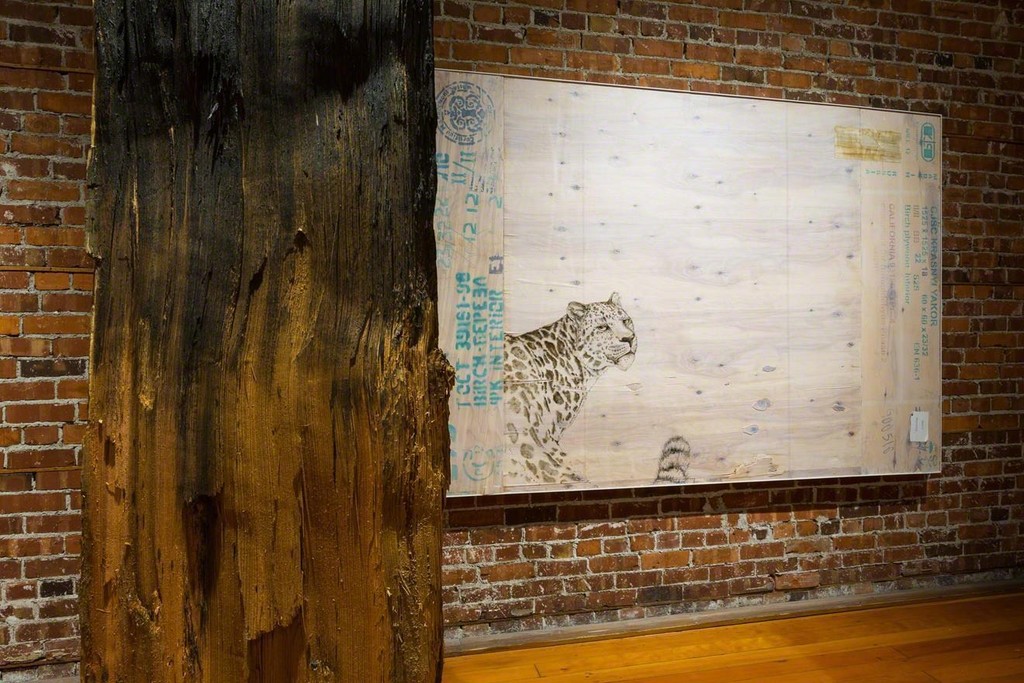 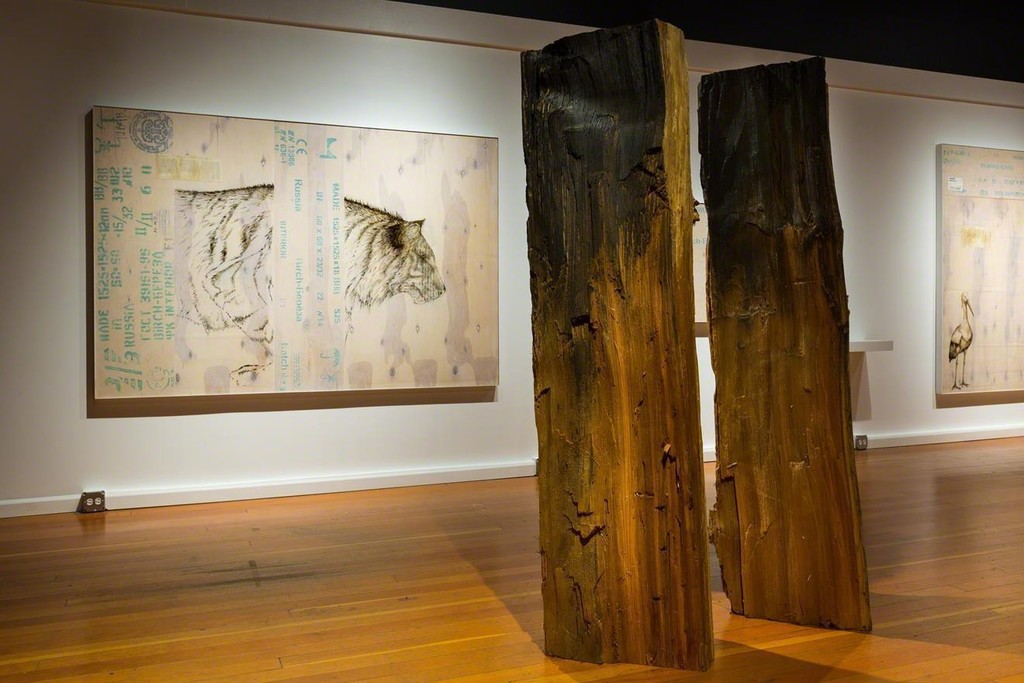 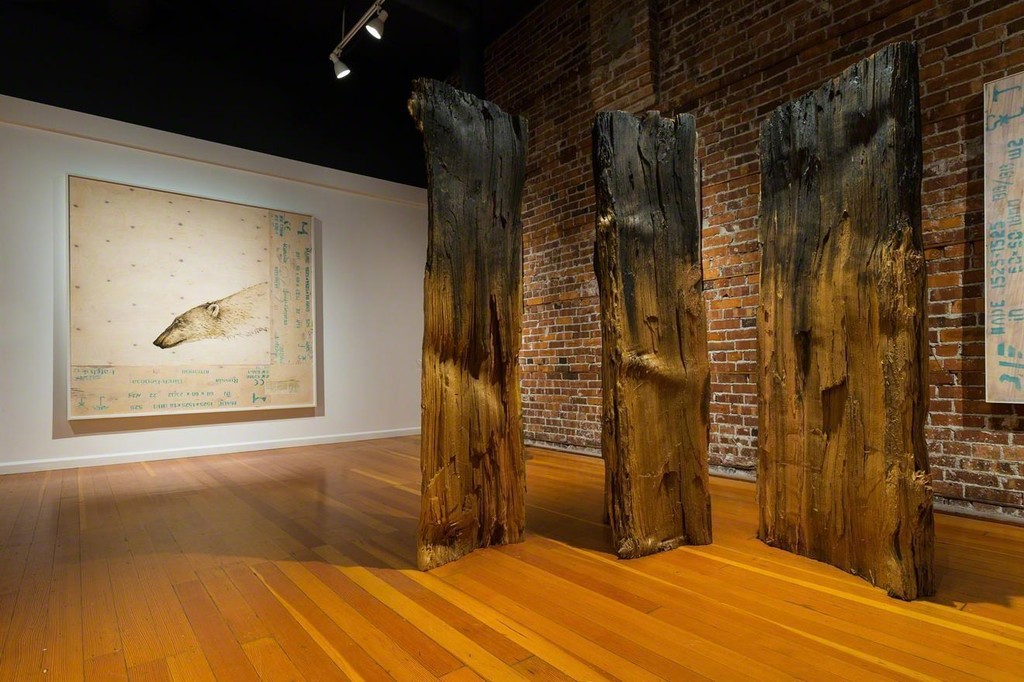 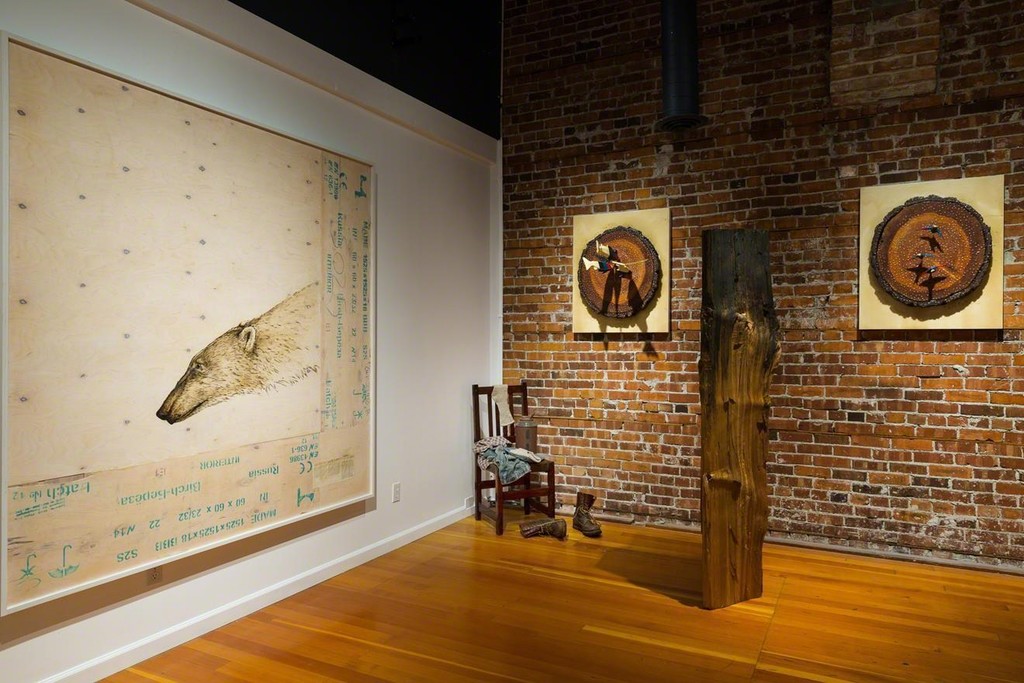 Joseph Rossano’s recent exhibitions conveys a deep admiration for nature, science and history. While the interdisciplinary systems of the natural world are highlighted through his works, Rossano’s show serves as a sampling of different organisms and their connections to one another.

A lifetime of observation flows onto veneer, renderings, "Pleistocene Dreams and Northwest Natives" reveal a personal history, mixing past, present, and fantasy. The implausible made plausible in the subtle combining of creatures, like the jack rabbit and sabretooth cat, a species that at once presents a contradiction, carnivore, herbivore, both, or ruse?

Spawned from a fascination with creatures that no longer inhabit our planet the drawings of this series serve as investigations for larger works destined to accompany multi-media installations. A merging of inspiration, these drawings in graphite and tar depict the real and the unreal by combining an interest in the Pleistocene Overkill, with the effect of invasive species on their native brethren. Each, seemingly validated by references to taxonomy.

In-gallery, truth and fantasy are positioned side-by-side. Light-hearted in nature and delicately rendered in graphite and tar, the images fade into their wood backgrounds beneath layers of clear finish and whitewash. Renderings of true Northwest Natives, like the Columbia Blacktail Deer and Steelhead Trout serve to further confuse viewers.

Species indigenous to a given region are represented on flora from that same region. Baltic Birch acts as a background for the Atlantic salmon while Big Leaf Maple serves as backdrop for the Fisher Cat. Creatures displaying morphological traits of our very own Anthropocene epoch intermix with those lost to this world 10000 years ago, imposters portrayed on the same wood.

These faux creatures trick their viewers as the renderings pass for something that might just have existed. Neither the reticulated shrew, sabretooth jackrabbit, or the oscillated trout can be found in the fossil record. The deception is furthered through a commingled DNA sequence, or Latin species name, accompanying many of the drawings. The truncated DNA sequences, barcodes, of an extant creature, mammal and reptile are combined in these works - the resulting species can only be described as a Pleistocene Dream.

Ultimately, an investigation of what one thinks they understand in nature is at the core of these works. What one will find is humor.

JOSEPH ROSSANO, born to clinicians and research scientists, graduated from Louisiana State University as an artist. His path joined him, via mentorship, collaboration, and exhibition, with renowned artists and institutions including Dale Chihuly, Judy Pfaff, The Pilchuck Glass School, Waterford Crystal, Museum of Glass, the South Australia Museum, and Google.

Integrating cutting edge technology and science with his art, Rossano engages and challenges the viewer to reflect upon humankind’s impact on our planet and its varied ecosystems.

Much of his youth was spent exploring the North Shore of New York’s Long Island and hiking in the Catskill Mountains. These were formative years that evolved a life focused on creating environmental awareness through art. Rossano now lives and works 65 miles north of Seattle, with his home and studio nestled in the temperate rainforests of the Pacific Northwest.

Rossano is the co-founder of Conservation FWD, and is the artist creating not only the organization’s inaugural show (Conservation from Here) but also defining the vision for future collaborations between the art and science communities.

For additional information on this artist please click on the following link here:
http://www.markmoorefineart.com/artists/joseph-rossano