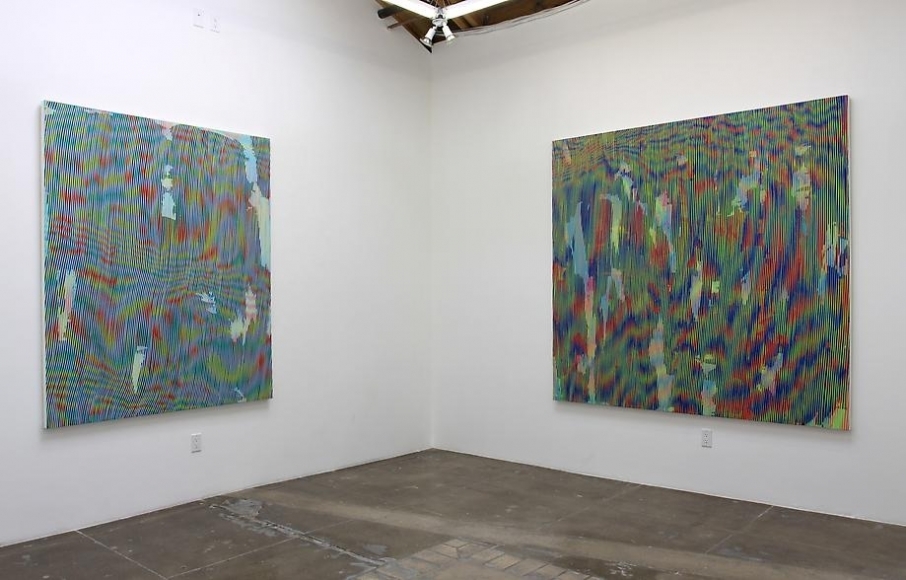 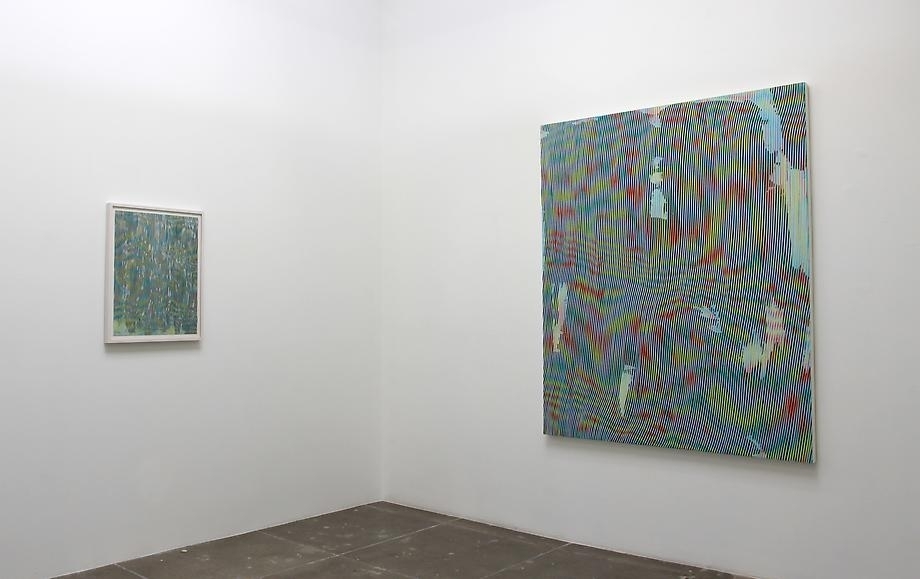 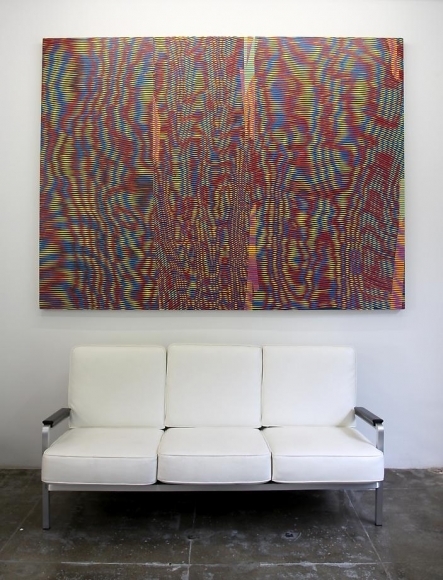 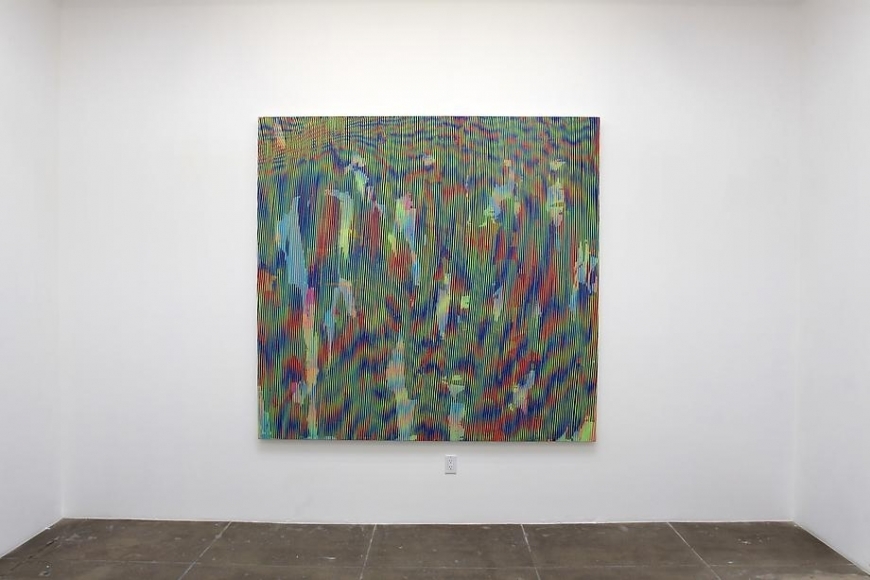 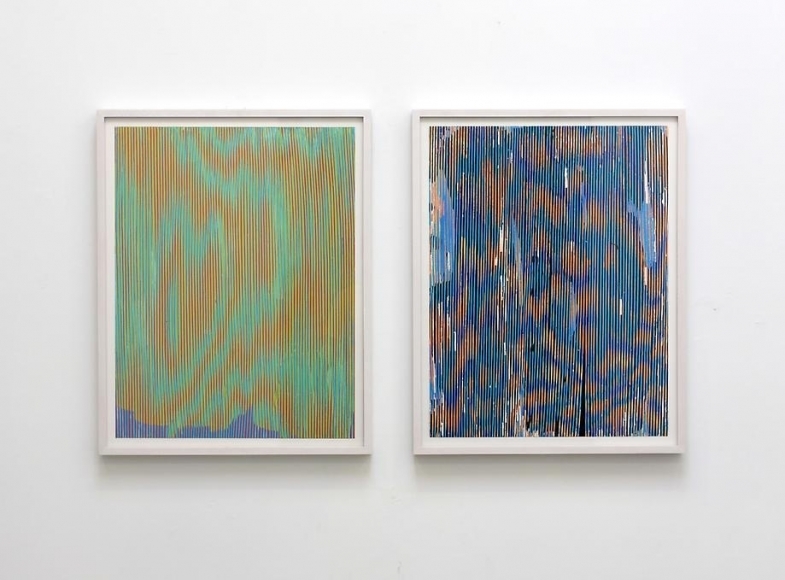 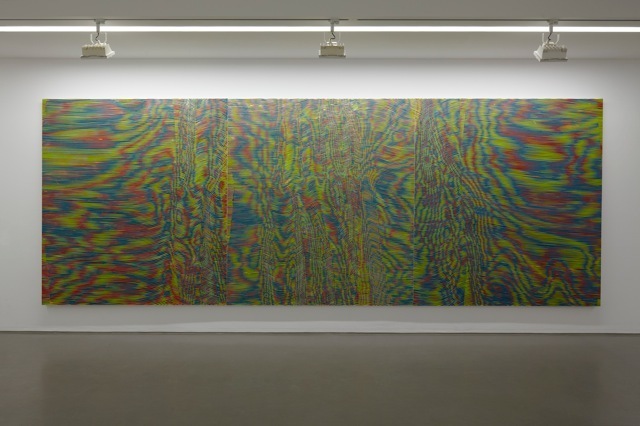 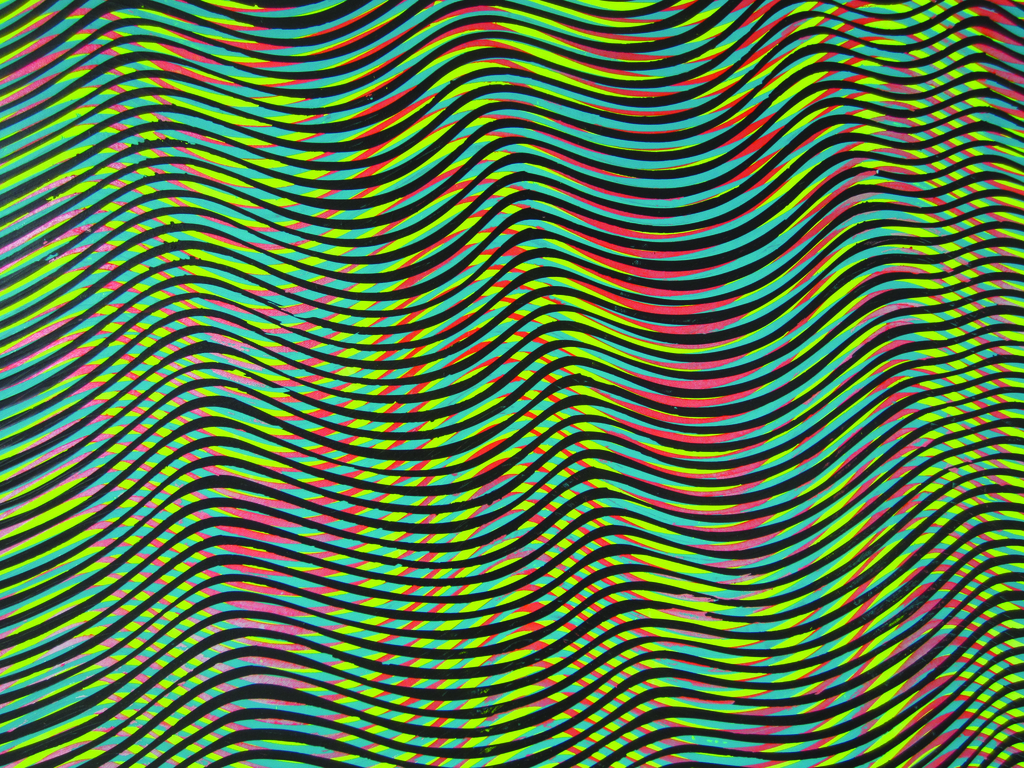 Oppermann's compositions are achieved through equal parts rule and spontaneity. Painting layers upon layers of nearly identical lines and waves, Oppermann crafts hallucinatory abstractions that flicker, expand, contract, and undulate based on the unique vantage point of an individual viewer. Her attuned use of hue, space, and contrast induce a kind of visual interference that embodies her concerns about the way information is disseminated – oftentimes generating strains between regions of glitches and consistency to illustrate the inherent flaws between transmission and perception. Oppermann's divergent studies in Neuroscience and Color Theory, coupled with her interest in comprehension and cognition yield these unsettling terrains – distorted topographies that achieve the familiar tension felt between physical and digital interface. While at times, Oppermann's hand appears extraordinarily controlled and calculated, her paintings simultaneously broadcast a competing technique born of impulsiveness and imperfection. Like the visceral reactions derived from manufactured imagery and information, Oppermann's paintings elicit an instinctive sense of attraction and curiosity.

“I would say that when you look at my paintings you see yourself seeing. They are sometimes a little challenging to look at, After-images and simultaneous contrast create sensations of movement, flashes and flickers of light, illusions of depth and space, uncomfortable tensions. If you look at them for a while they literally start moving, and you end up blinking and wondering what is going on – you are watching your visual system bug out. It is a little over- whelmed by the information coming in, and is having trouble figuring out how to process it. That’s pretty cool to recognize, because most of the time we don’t give this any thought, we just assume that what we are seeing is true.” - Julie Oppermann (2016)

Julie Oppermann's work pushes the limits of visual perception, making paintings that are physically difficult to perceive. The scintillating effects arising through the calculated layering and juxtaposition of contrasting colors through repetitive line patterns elicit shuttering afterimages, optical flicker, and disorienting sensations of movement. The paintings, on one hand, reference the digital, looking as if they might be computer-generated, vector-based interference patterns; up close, however, they reveal a gestural, intuitive approach. Glitches, bleeds and mis-registrations rupture the illusory field of the moiré, creating visual noise and also highlight the basic tools at work: taped-off line patterns and paint on canvas. Where others approach ideas such as rasterization, pixelation, image compression, data loss and corruption primarily through the more obvious channel of digital media, Oppermann succeeds, instead, by effecting these phenomena directly through the medium of perception itself. The glitch, so to speak, occurs in the viewing of the work, by distorting the viewer's field of vision, and interfering with their ability to "see" and look at the painting.

Concurrently, Oppermann is also featured in another exhibition titled “Process” at the Barrick Museum at the University of Nevada Las Vegas through May 13, 2017.

This exhibition will also include works by: Julie Oppermann; Christopher Duncan; John Bauer; Lester Monzon; Kim Rugg; Kara Joslyn; Heidi Schwegler; Meghan Smythe; Christopher Russell, along with Ryan Wallace. Each of the artist’s process of creation is brought to the forefront in the exhibition. While some of the work seems very immediate visually the artists process is actually quite extensive in getting to the final image. Highlighted are the artist’s use of materials including the sun and time to create abstractions while others use computers and man made materials.

Rooted in Dada and performance theater, Process Art is a conceptual framework that allows the intangible act of creation to be made perceptible in the finished artwork. It played a key role in the careers of pioneering twentieth-century art world figures such as Joseph Beuys, Eva Hesse, Bruce Nauman, and Richard Serra. Following in their footsteps, the artists of “Process” have forged eloquent visual languages around the environmental effects of the sun, the retrieval of debris from a studio floor, and the intricate movements that a hand undergoes as it cuts and reassembles postage stamps. Visitors can expect to encounter a fresh and perhaps unfamiliar field of art-making in which energy is celebrated and the finished object is not always the principle focus.

Julie Oppermann is an artist from New York who lives and works in Berlin. She received her BFA from The Cooper Union, and a Master's in Neuroscience from the University of California, Berkeley. In 2012 she completed a residency at FAAP in São Paulo, an academic exchange with Professor Robert Lucander at the Berlin University of the Arts, and completed her M.F.A. at Hunter College. In 2013 she had solo exhibitions at Mark Moore Gallery in Los Angeles, and Galeria Árnes y Roepke in Madrid. Her work is included in numerous public and private collections, including the Museum of Fine Arts Houston (TX), and the Museum of Contemporary Art, San Diego (CA).