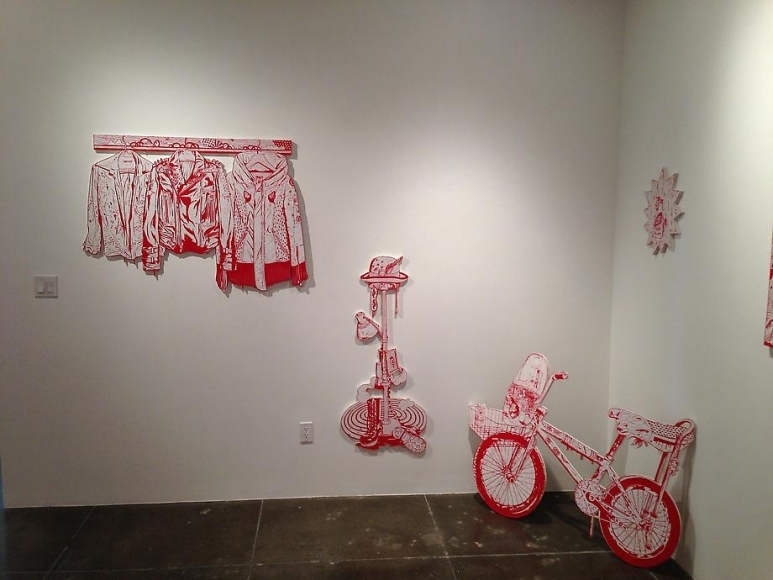 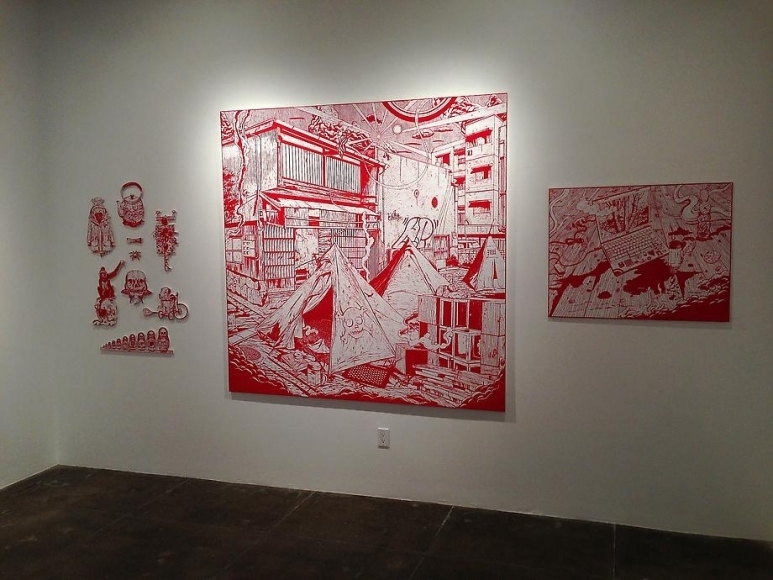 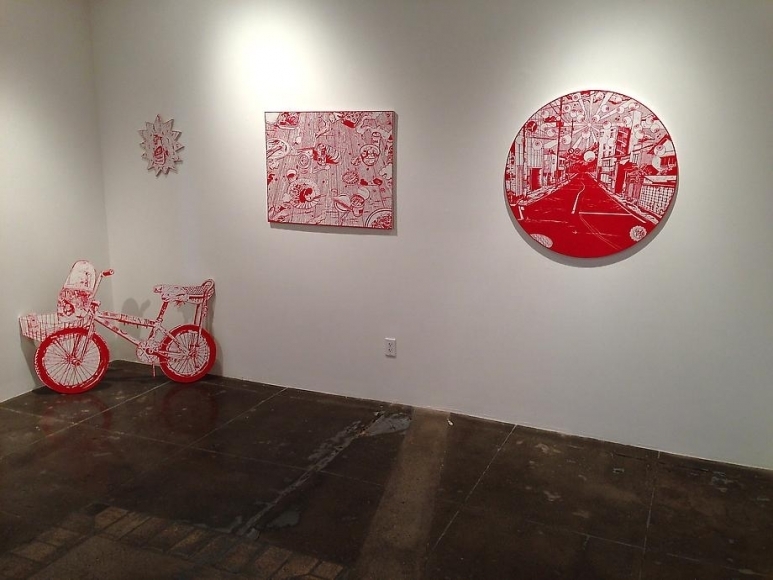 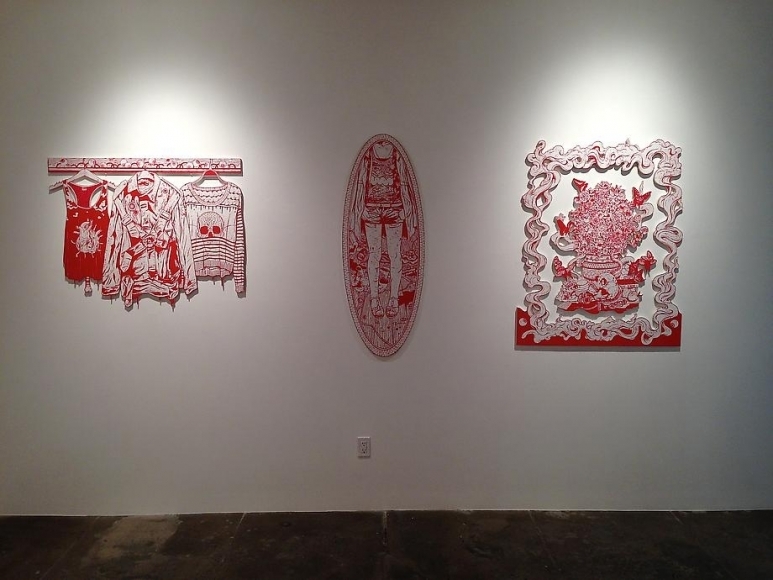 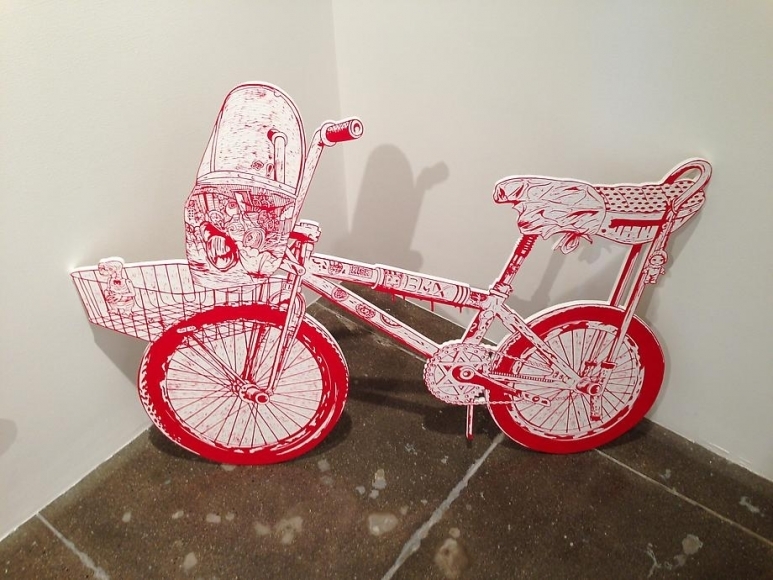 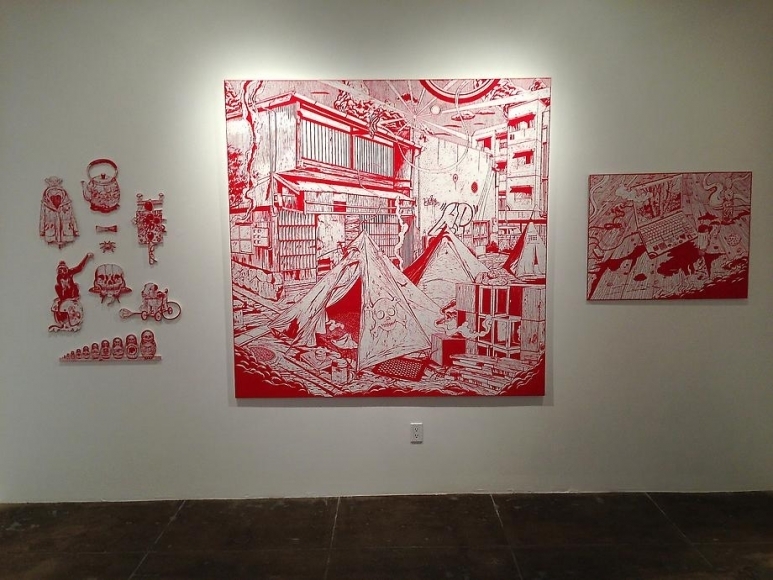 As one of the most noted figures of Japan’s ubiquitous manga and anime culture of the so called “Cool Japan”, Kenichi Yokono has been making his unique brand of art using traditional woodblock cutting techniques to question in his very own, eccentric manner the way of life of Japanese suburbia for the last Twenty Years. Mark Moore Fine Art now focuses on this highly-acclaimed talent with an exclusive on-line exhibition.

Kenichi Yokono uses woodblock methodologies to address the stark contrast between traditional and contemporary Japanese culture, as well as the confluence between Western and Eastern pop cultures. Influences from manga, anime, horror movies, and other stereotypical aspects of Japanese pop culture merge to present iconic images of buoyant kawaii (or “cuteness”) in contrast with “the horror of everyday life,” according to the artist. Also referencing his longtime interest in American skate and surf culture, Yokono’s carvings often depict a “punk rock” sensibility that speaks to a desire to break outside of customary Japanese sensibilities.

Although functioning woodblocks, Yokono’s works are without the conventional prints that have historically served as the final art object - rather, the woodblock itself is the art object; a subtle pushback against orthodox Japanese art-making that bridges past and present cultural realities. Similarly, Yokono demonstrates an interest in the Western art historical canon, oftentimes including elements of Dutch vanitas or still life painting in order to draw a parallel between popularized and underrepresented notions of mortality. As has been explored in more predominantly historicized art movements, Yokono embellishes upon the Japanese fascination (and celebration) of the delicate line between life and death, beauty and vulgarity, or normalcy and the bizarre. His meticulous craft maintains the primacy of the handmade object - through which the artist retains a tangible presence. These multiple oppositions in Yokono's work result in pieces that are rife with social critique and irony.

“Yokono's dazzling work merges the playful and the dire, the upbeat graphic punch of cartoons with dark Expressionist urgency. Yokono carves woodblocks as if for printing, painting the raised surfaces cherry red and the rest a crisp white. Raw, vibrant and irreverent, the works have one foot in the pop-dominated present and the other in the tradition-bound past.

Several of the sculptural paintings are in the shape of skateboards, and the spectacular centerpiece of the show, "Fling Mac," takes the form of a folded screen. The trademark golden arches blast upward within this four-panel landscape, a radioactive wonderland of ebullience and postapocalyptic toxicity.”

Born in 1972 (Kanazawa, Japan), Yokono was trained at the Kanazawa College of Art (Japan). He has had solo exhibitions in Tokyo, Los Angeles, Vienna and Amsterdam, among numerous international group shows at venues such as the Torrance Art Museum (CA), The Ueno Royal Museum (Tokyo), Mori Museum (Tokyo), Suzaka Manga Museum (Nagano), Hilger Contemporary (Vienna), and Joshua Liner Gallery (NY). He has participated in residencies at the McColl Center for Visual Art (NC) and the International Studio and Curatorial Program (NY), and was the recipient of the 2005 Asian Cultural Council Fellowship award, as well as the Tom Eccles Prize (NY). His work in included in the collections of the West Collection (PA), Honolulu Museum of Art, The Pigozzi Collection (NY/SWZ), and Progressive Collection (OH) among others. In addition to Mark Moore Gallery, Yokono is also represented by Micheko Galerie, a German gallery with a focus on 21st Century Art from Japan, and Unseal Contemporary (Japan). The artist lives and works in Kanazawa, Japan.