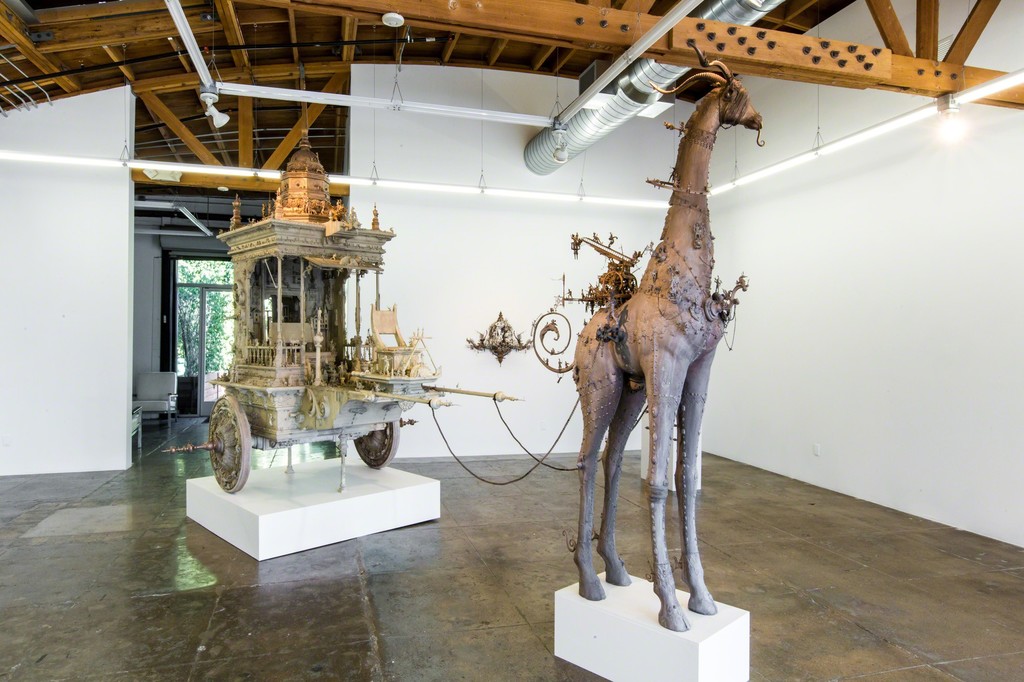 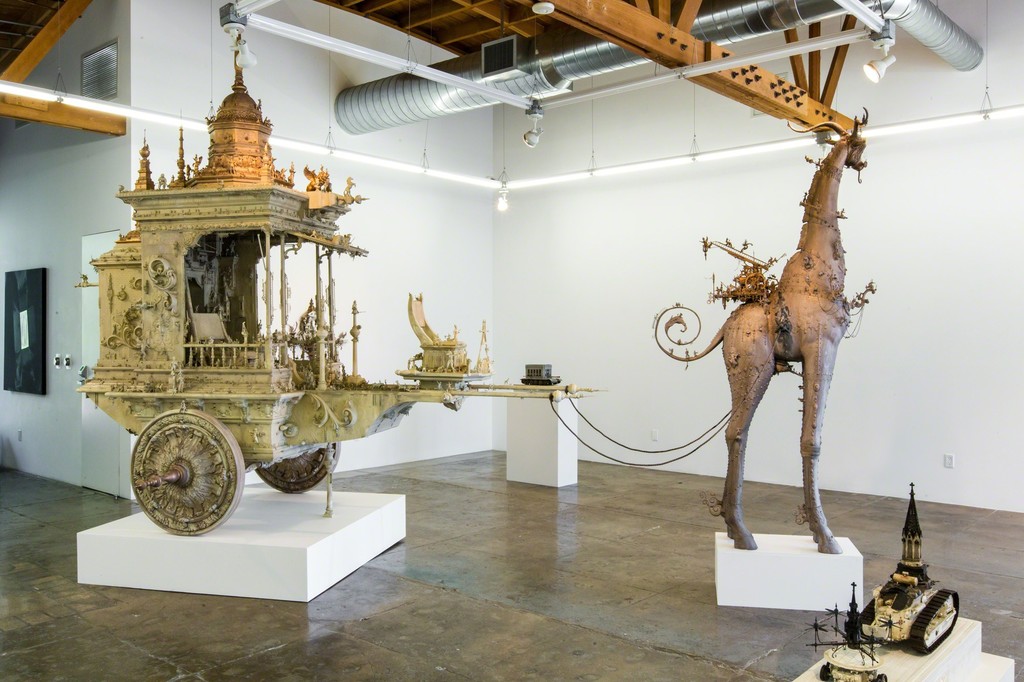 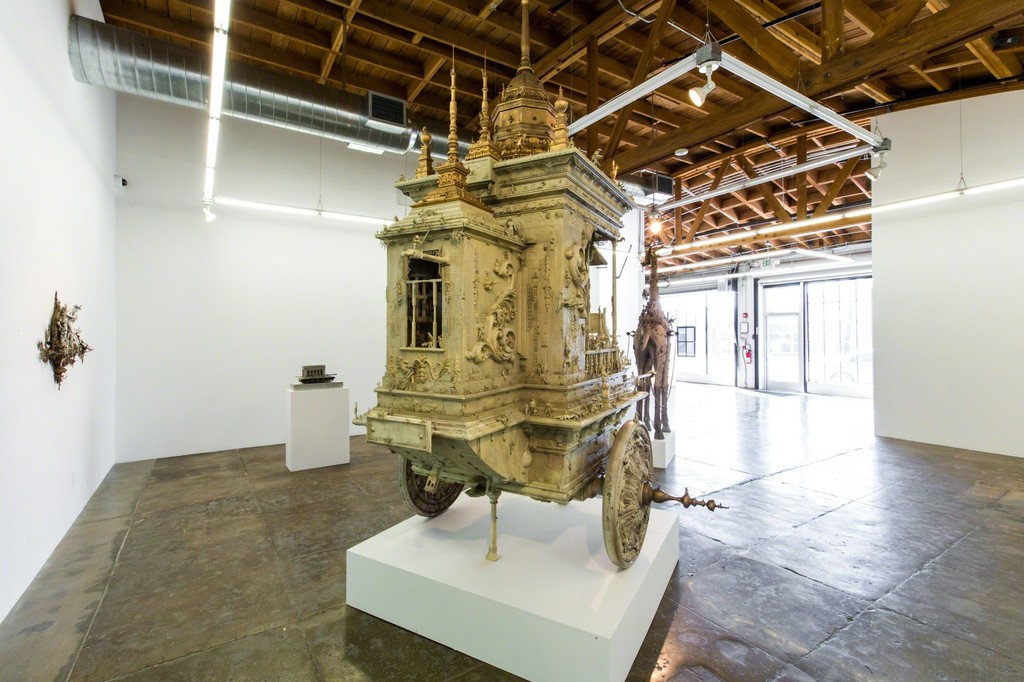 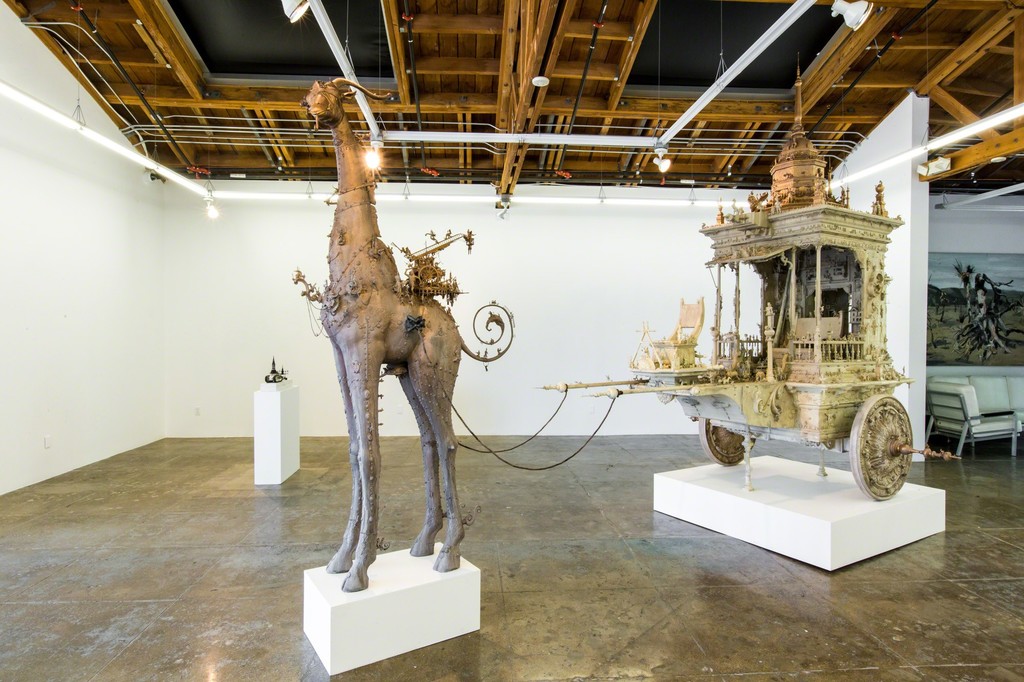 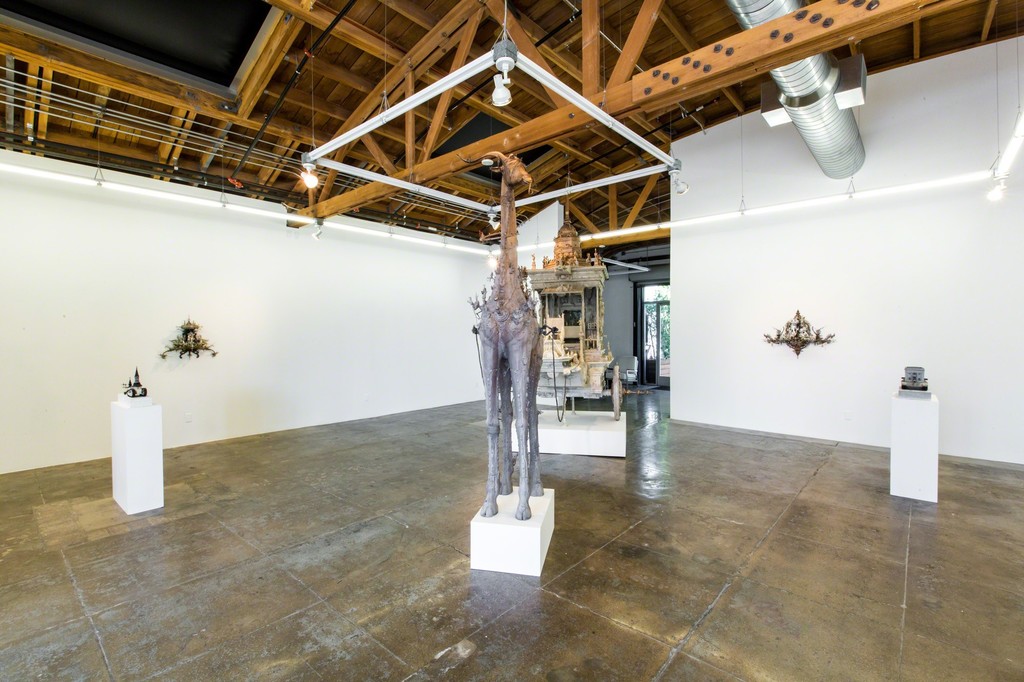 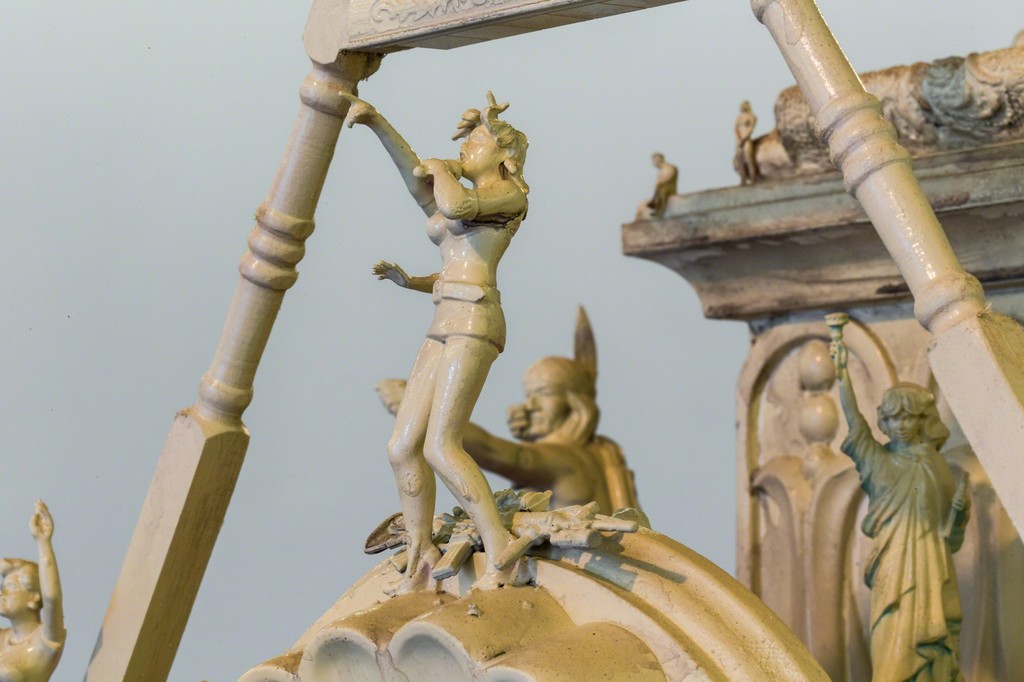 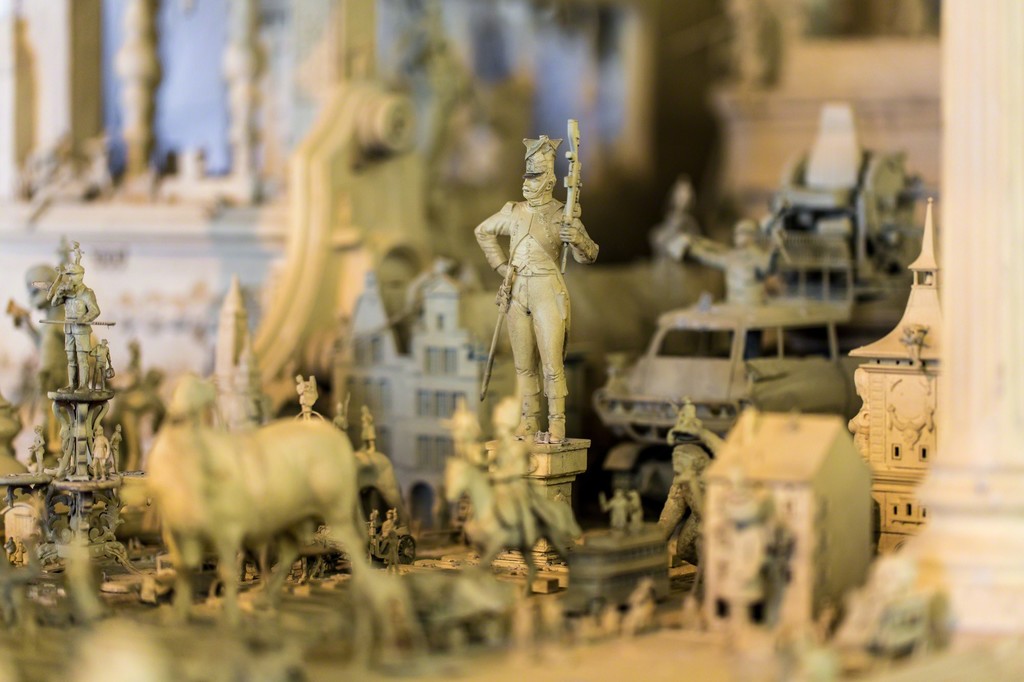 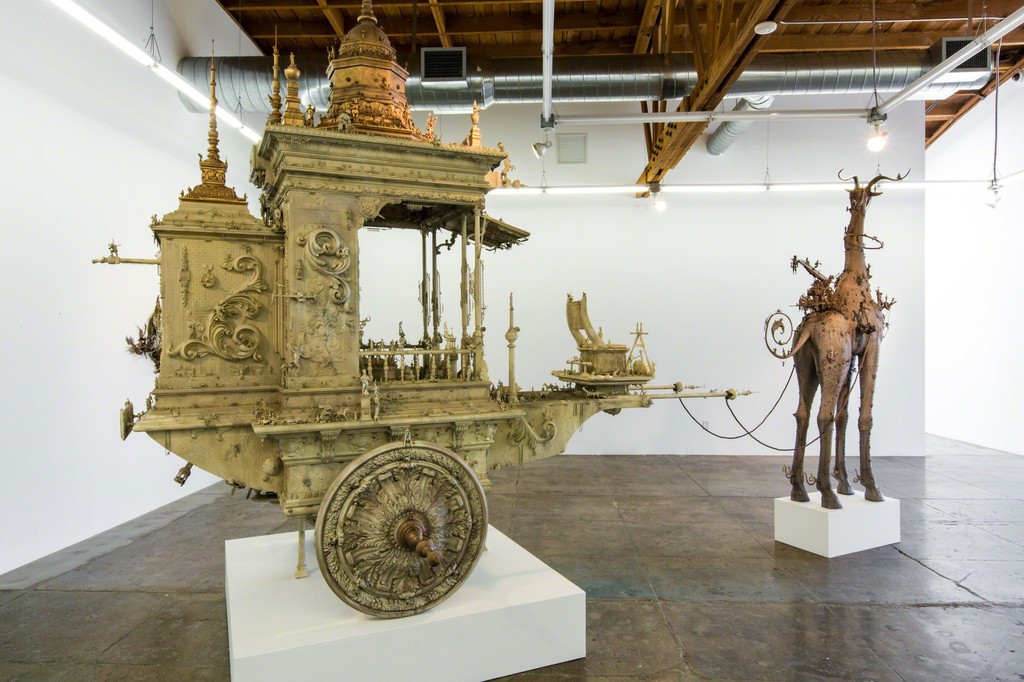 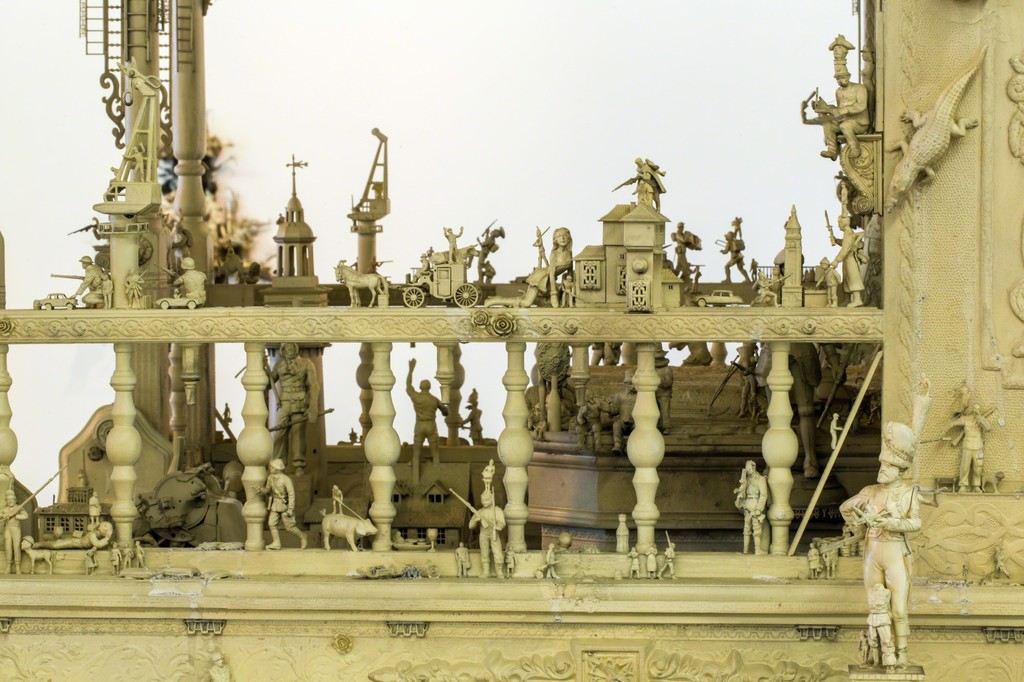 Over the last decade, Kuksi has built a career creating complex sculptures that blend antiquity with the modern world. Teeming with struggle, conflict, faith, sexuality, and power, each sculpture affords the viewer a ringside seat for a wild spectacle as the spheres of fantasy and reality collide. For this exhibition, Kuksi creates New Rome, a society rife with allegory consisting of works crafted in a hybrid style of baroque and rococo that deeply examine the human psyche. Every sculpture is created from an obsessive collection of cultural flotsam and jetsam – figurines, model parts, collectibles, craft parts, and jewelry. The final pieces, sometimes as large as 10Ft wide, are totemic like shrines that expose Kuksi’s disenchantment with the structures of power and the fallacies of man. Yet, the works are not without their romance, as the wonders of the world are presented through elaborate entaglements of miniature bears, mythical beasts, and glorious figurines. In the Los Angeles Times review of Kuksi’s 2014 exhibition David Pagel writes, “Kuksi’s Baroque confections treat history as primordial soup — a burbling stew of thrilling highlights and epic tragedies that not only resonate in the mind’s eye but also inspire all sorts of emotions — good, bad and otherwise.”

In this exhibition, Kuksi gives us the range of human emotion in thousands of pieces, making up one grandiose whole.

Kris Kuksi earned his BFA and MFA in painting at Fort Hays State University. He also studied internationally while enrolled in programs in Germany, Austria, and Italy. His work has been featured in over 100 exhibitions worldwide, including those at La Halle Satin Pierre Museum (Paris), Museum of the History of Science (Oxford), Williamsburg Art and Historial Society (New York), and the Smithsonian National Portrait Gallery (D.C.), as well as within numerous international art magazines and fictional book covers. His work is in the collection of The Crocker Art Museum (CA), and Empire Collection (KS). Solo exhibitions of his work have been presented in New York, Los Angeles, Seattle, Basel, Toronto, Berlin, Washington D.C., and Kansas City. The artist lives and works in Lawrence, Kansas, and is also represented by Joshua Liner Gallery (NY).