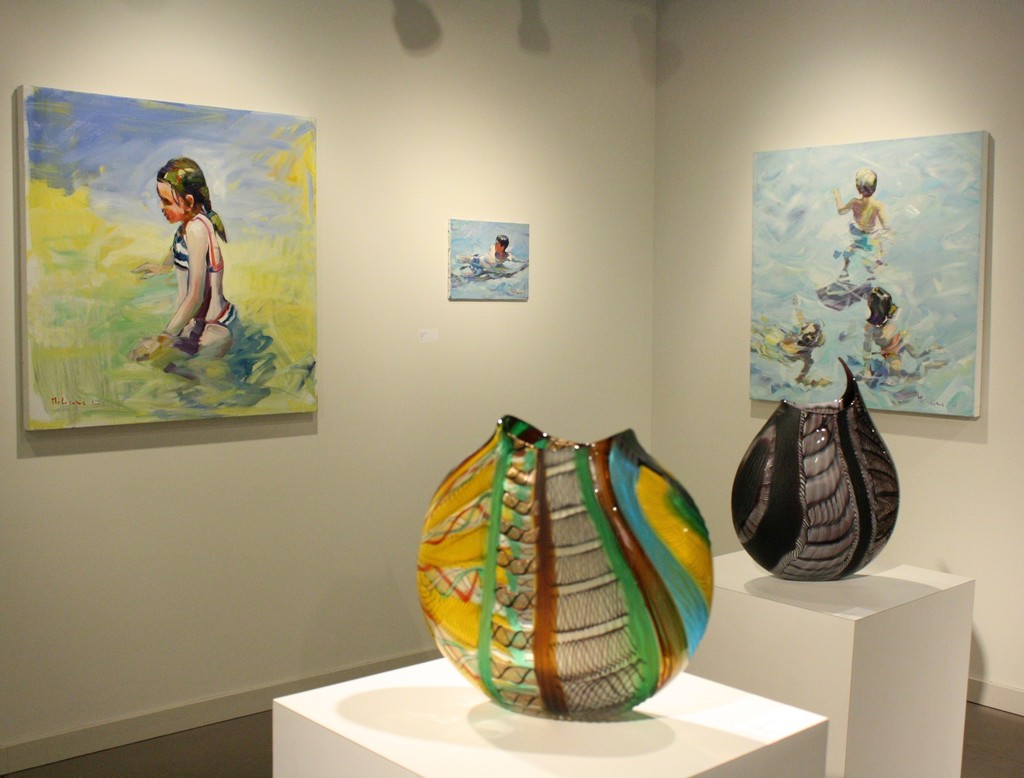 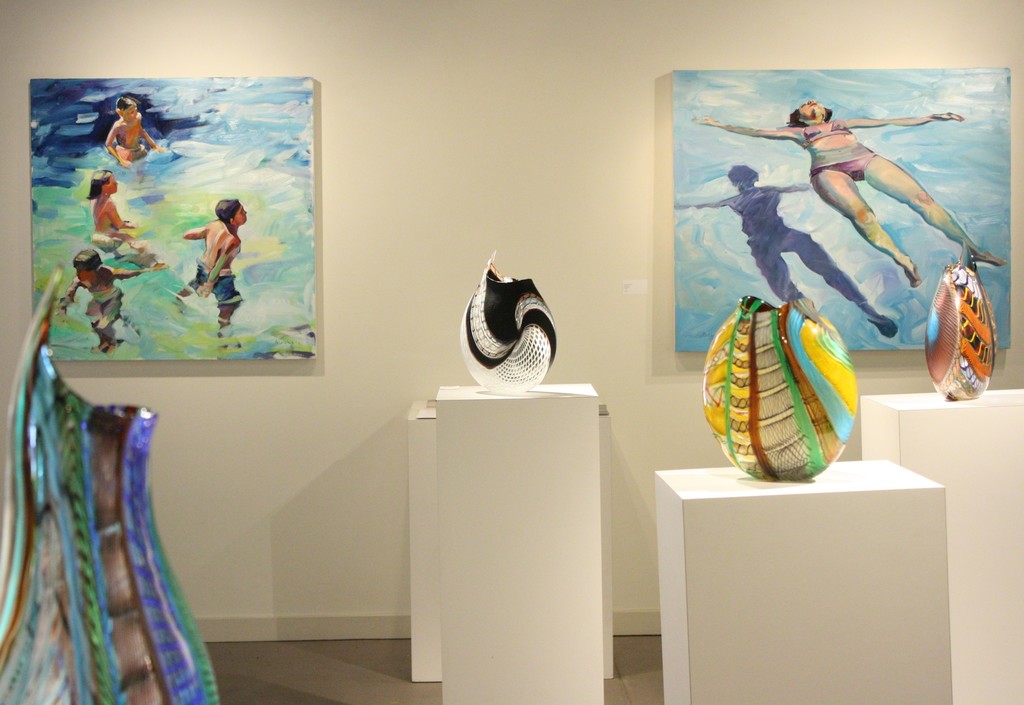 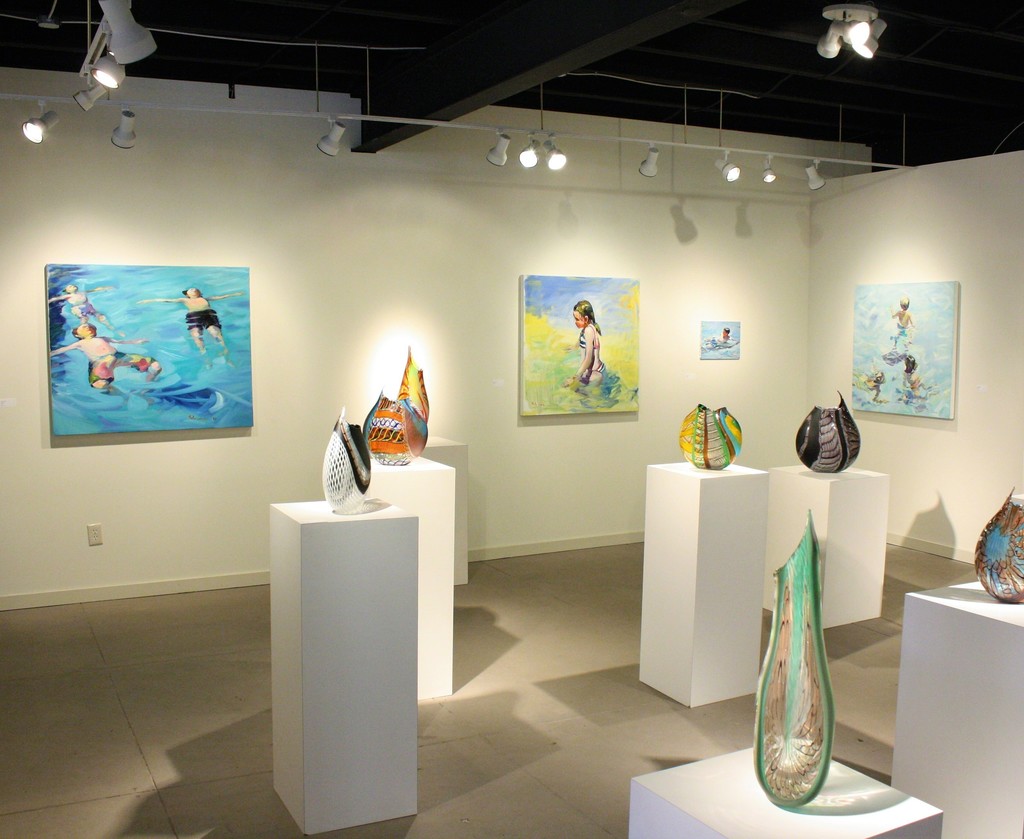 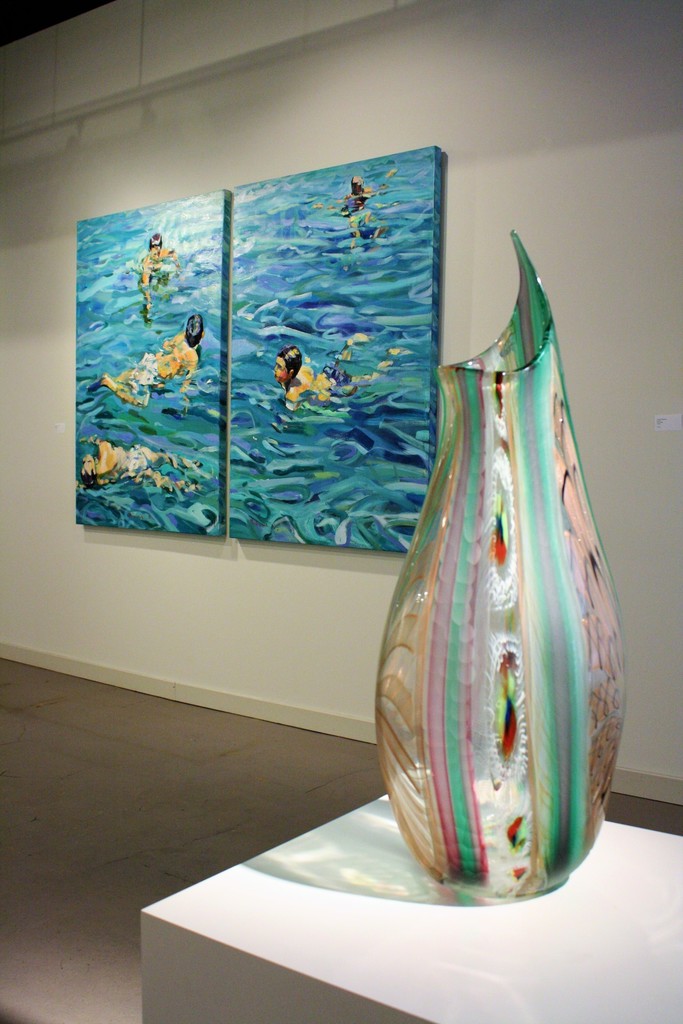 CINCINNATI, OH - Marta Hewett Gallery is pleased to announce its summer exhibition Riflessioni di Colore (Reflections of Color) featuring two exceptional Italian artists: Claudio Malacarne and Gianluca Vidal. The exhibition will be on view from August 11th through September 30th, 2017. The gallery will host an opening reception on Friday, August 11th from 6-8 pm. This event is free and open to the public.

Painter Claudio Malacarne and glass artist Gianluca Vidal are accomplished artists in their mediums. While both artists have had exhibitions in the United States this is the first time their work will be shown together. For centuries Italy has been home to artists who have mastered their craft. Malacarne and Vidal continue this heritage. The exhibition is a celebration of gesture and color and a unique opportunity to experience contemporary Italian artwork at its finest.

Riflessioni di Colore will feature works from Claudio Malacarne’s Water series. Immersed in cool expressionistic pools of color, the figures depicted in Malacarne’s paintings appear relaxed and comfortable. Unaware of the gaze of the viewer, the subjects float, swim and wade through the compositions. Water encompasses the entire format of the canvas devoid of land or a horizon, leaving only the gesture and emotion of the subjects. The subjects appear youthful and preoccupied with their own space, their eyes closed or gazing into an implied distance. The landscape, inspired by the Mediterranean Sea, is familiar to most as a place of leisure. Rendered as infinite space, it becomes a metaphor for a safe environment where the figures share an intimate experience with the viewer. Each composition is like a memory — a moment that is familiar, yet hard to place in time. A tribute to the aquatic scenes depicted in the paintings of neo-expressionist artist Eric Fischl, Malacarne finds a unique voice in his gestural brush strokes and bold palette of colors.

Each piece Gianluca Vidal creates is a dizzying exercise in rich color, movement and texture, reflecting the intricate fabric of his native city and studio home in Venice. From these he twists, bends and pulls them into spectacular murrine and zanfirico pieces. These complex murrine follow a tradition revived by Venetian glassmakers in Murano in the early 16th century. The pieces are cut and prepared on a metal plate in a pattern that will result in Vidal’s signature compositions of brilliant colors and shapes. The colors are carefully curated and range from warm earth tones to a cool aquatic spectrum. Vidal then prepares a “gather” of hot glass (around 2,400 degrees) on the end of his blowpipe. The gather is rolled over the warmed glass murrine pieces in a “pick-up.” Vidal proceeds with the careful process of re-heating, rolling, shaping, blowing and adding more glass until he has all the pieces perfectly fused together. The blowpipe is switched to a “punty” and attached at a different location so the artist can change the “axis” of the vase. This technique is only mastered by a small number of artists and allows for the dramatic fluid patterns found in Vidal’s glass work. The next step involves removing the vase from the punty and putting it into an annealing kiln, where the vase is slowly and carefully cooled over 48 hours. The annealing process gives the vases their strength. After the vases are cooled they are carved or ground with a variety of sizes and shapes of grinding wheels to give Vidal’s glass works their unique surface texture. While carrying on the traditions of Venetian glassmakers, Vidal and his contemporaries have pushed the medium to a new level in contemporary glass.

Claudio Malacarne (b. 1956) was born in Mantua, a city surrounded by lakes in northern Italy. Over the years he attended the studio of the master Enrico Longfils. Malacarne ranks among the most prolific colorists of our time. His major works and small compositions immediately attract attention for their radical use of color, fueled by a continuous rhythmic play of colors. His full-bodied strokes, stretched out on the canvas with broad gestural action, show a vigorous painting and highly communicative style, bringing the viewer a strong emotional impact. Very often they represent sunny and colorful landscapes, inspired by the Mediterranean.

After discovering the Spanish realism of Joaquín Sorolla, with his inquiring eye and his Fauve color, Malacarne has in the last decade become the artist of "bathers and swimmers." In these paintings one perceives the influence of Matisse, but also the charm and wonder of Rimbaud and Valéry. Since 1986 Claudio Malacarne has exhibited throughout Europe. He has participated in many international exhibitions including Art Fair Innsbruck, Artinvest Rivoli , Gent Belgium Art Exhibition , EuropART in Geneva, various editions of Arte Fiera and miart .

Gianluca Vidal (b. 1976) was born in Venice and at the age of 14 started to work with glass at the Studio Vetreria DP, on the island of Murano. Here he studied under the glass maestro Imperio Rossi. After two years he moved to the studio of Effetre Internationalas the youngest glass worker in the studio. Under the tutelage of the masters at Effetre, Vidal began to learn the most difficult glass techniques, and his talent as a glass maker began to emerge.

Vidal has worked over the years with many of the most important glass maestros in Murano, including Afro Celotto, Silvano Molin, Luciano Pavanello, Giancarlo Tagliapietra and Dino Vio. His colleagues gave him the nickname “Crema,” because of his natural ability to gracefully shape glass as a “cream.” The master glassmakers of Murano are able to blow very thin and airy forms that are delicately shaped, using only a few simple iron tools. These tools are virtually the same today as they were a thousand years ago.

In 2000, while working at the artistic glass factory Schiavon, Vidal again had the opportunity to work with the great maestro Afro Celotto, whom he had also known at Effetre. One year later, after learning the techniques of filigrana, mosaics, and tesserae murrines, he decides to open a new studio with Celotto and Carlo Tagliapietra. Celotto’s 2009 departure from the studio gave Vidal the chance to express his own talents and energy. Today Vidal owns his own glass studio in Murano. This is the artist’s second exhibition at Marta Hewett Gallery.