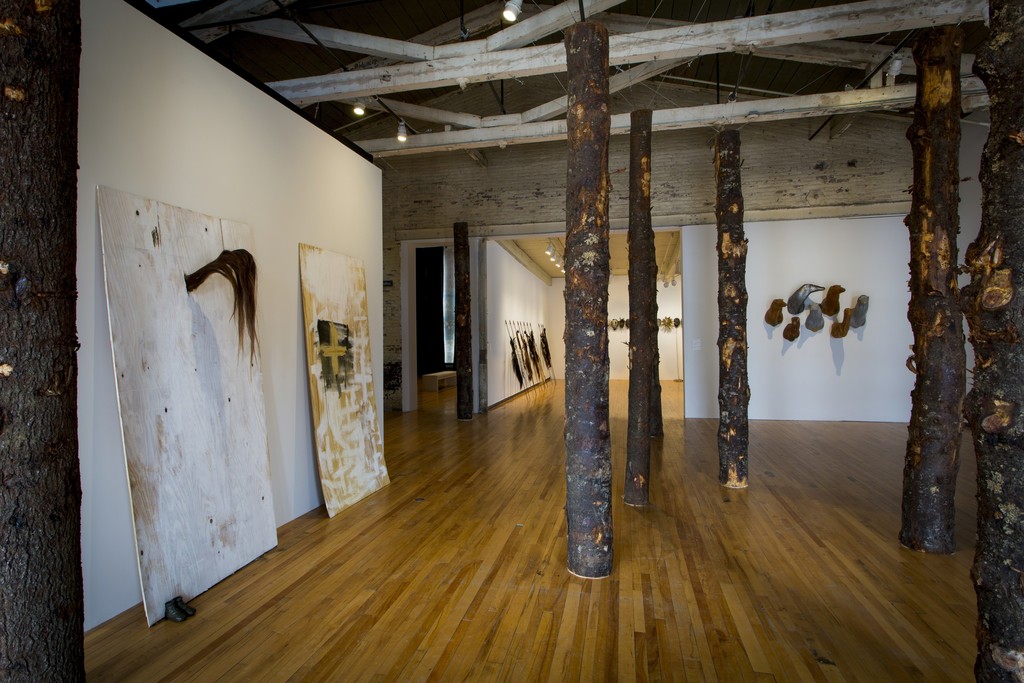 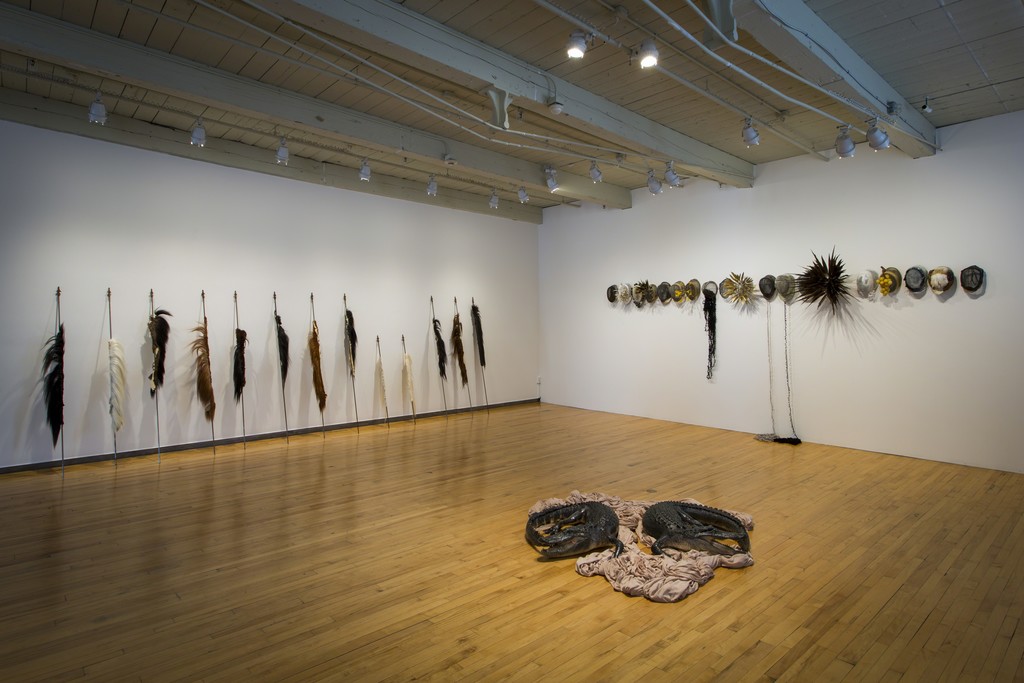 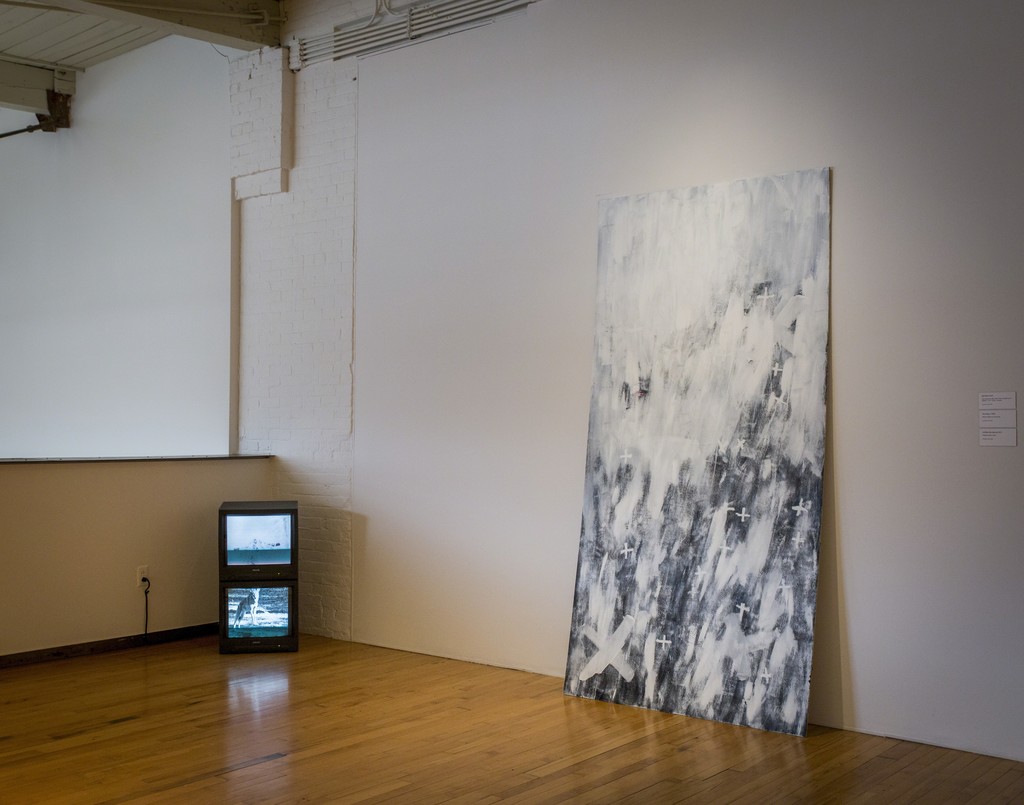 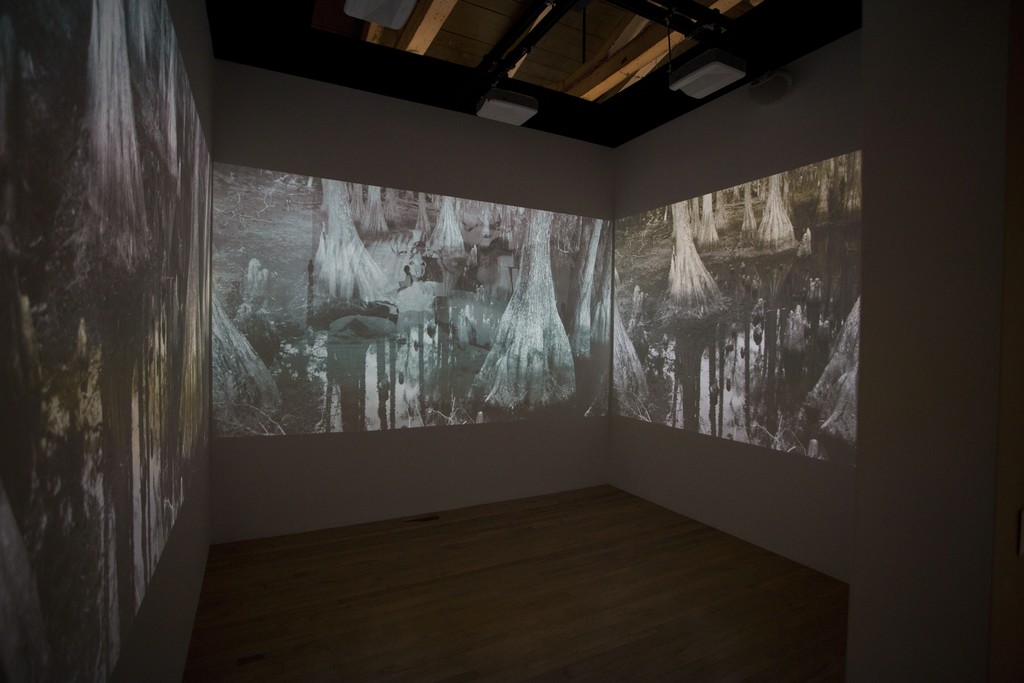 NORTH ADAMS, MASSACHUSETTS — Allison Janae Hamilton’s evocative work is influenced by the sights and sounds of the contemporary southern landscape. Her photographs, videos, sculptures, and installations feature images familiar to the north Florida and Tennessee landscapes that are home to her family: boiling swamps and tall pines, vespid wasps and green anoles, wild horses and white clapboard houses. At MASS MoCA — in her first solo museum exhibition — Hamilton presents an ensemble of existing and new works, including a new installation that looks at how history, labor, land, violence, myth, and spirituality intersect in the present. The exhibition’s title, Pitch, suggests not only the resin material of pine trees mined in the turpentine-making industry of the area, but also the myths and fables that take place in the pitch-black hours of night and an array of noises heard in the environment that inspires Hamilton, from the sounds of animals to those associated with labor and song. The exhibition opens with a reception to celebrate the artist on March 24.

Throughout Pitch, Hamilton conveys a sense of a place that is both magical and menacing — where Spanish moss decorates the knotted trees, music fills the humid air, and alligators roam the shallow waters. For Hamilton, this terrain and its inhabitants are not the stuff of fiction or gothic fantasy, but “tangible matter of palpable consequence.” In MASS MoCA’s third-floor gallery, towering, twelve-foot pine logs evoke the tall pine forests of north Florida. Wandering through the trees, the curious will find the entry to an intimate space featuring a new iteration of the artist’s video FLORIDALAND. The atmospheric, four-channel video envelops the viewer in a kaleidoscopic experience of the sights and sounds of the landscape with images of shimmering ponds, reflected clouds, and masked characters who roam the coast on horseback and dance through marshy fields. The audio is a combination of nature sounds, traditional lining hymns, noises recorded in-studio, and other sounds inspired by African-American sacred harp and shape note singing from the Florida-Alabama coast.

The installation comes alive with an array of objects that the artist has collected from the area — and altered in various ways. These include tambourines, fencing masks, horsehair, and taxidermy molds. Cast-off treasures and knick-knacks provide a glimpse into stories not often told, and add a sense of the uncanny to the environment Hamilton creates. The artist imagines that these seductive and sometimes strange relics belong to an unseen caretaker who inhabits the landscape. The world the artist creates is part fact, part fiction — flights of the imagination rooted in the real history and memories of a place. Visitors will encounter references to the literal and metaphoric scars of the pine industry and the turpentine camps (not unlike the slave plantations once located on the same land), along with the music that grew out of this labor and the resilient spirit of the workers.

The people and animals who live on this land are as important in Hamilton’s narratives as the place, and family members often populate and help produce many of her performance-based works. A selection of photographs in the exhibition features images of friends and family performing within the landscape. Churches, porches, pine trees, lakes, and fields provide the setting for imaginary tableaux that bring to mind both the dream-like images of Sally Mann and the psychologically tense portraits of Diane Arbus. In The Hours. (2015) a girl in a bright yellow dress and green hair ribbons sits on the front stoop of a house, two suitcases packed. On her head, she wears the skull and antlers of a stag that obscures her face. In Brecencia and Pheasant II. (2018), a woman dressed in her Sunday best, wearing a mask made from a fox head and feathers, holds a pheasant. Like a natural part of the forest that surrounds her, she appears, like the pheasant, to be an integral part of the ecosystem, rooted in the place.

Three commanding, full-sized alligators in the exhibition are also part of the rich Florida ecosystem and are powerful figures in Hamilton’s work. A common creature in the region and one that is both predator and food source, alligators are a symbol of the symbiotic relationships between the inhabitants of the land (the artist grew up in a family network of hunters). Twisted into circles, the alligator sculptures reference the mythical Greek ouroboros (the serpent devouring its own tail), reminding us of an eternal cycle of destruction and renewal. They also function as a tangible manifestation of other monsters that we live with, lurking but often invisible, like the racism that is most dangerous when hidden.

A mix of personal realities and epic narratives, the artist’s rich vision of the rural landscape is a lens through which she explores the intersection of agricultural, environmental, and social histories that continue to inform the present. Hamilton creates a world that is moody and complex, acknowledging the legacy of an ugly past that seeps into the present while celebrating the beauty and culture that persist.

About the Artist
Allison Janae Hamilton was born in Kentucky in 1984 and raised in Florida, and her maternal family’s farm and homestead lies in the rural flatlands of western Tennessee. She received her Ph.D. in American Studies at New York University and her MFA in Visual Arts at Columbia University where she studied with Sanford Biggers and met mentor Joan Jonas. Hamilton was a 2013-2014 Fellow at the Whitney Independent Study Program. She has exhibited at museums and institutions such as the Studio Museum in Harlem, New York, NY; Smithsonian National Portrait Gallery, Washington, D.C.; the Jewish Museum, New York, NY; the Museum of Modern Art, New York, NY; Fundación Botín, Santander, Spain; the Museum of Contemporary Photography, Chicago, IL; and the Tacoma Art Museum, Tacoma, WA. Hamilton has been awarded artist residencies at Recess, New York, NY; Fundación Botín, Santander, Spain (selected by Joan Jonas); the School of Visual Arts, New York, NY; and the Rush Arts Foundation, New York, NY. Her artwork has appeared in publications such as Transition Magazine, Women and Performance, Arte Al Limite, NKA: Journal of Contemporary African Art, and Artforum. She lives and works in New York City.

About the Curators
Susan Cross is Curator of Visual Arts at MASS MoCA.

Larry Ossei-Mensah is a Ghanaian-American independent curator and cultural critic who has organized exhibitions at a variety of venues throughout New York City, featuring artists Firelei Baez, ruby amanze, Hugo McCloud, Brendan Fernandes, and Derek Fordjour, among others. He has contributed to publications such as NeueJournal, Uptown, and Whitewall Magazine, and has written about Derrick Adams, Mickalene Thomas, Kehinde Wiley, Lorna Simpson, and street artist JR, among others. Ossei-Mensah is also the co-founder of ARTNOIR, a global collective of culturalists who design experiences aimed to engage this generation’s dynamic and diverse creative class. ARTNOIR has organized programs with artists, authors, and organizations such as Wangechi Mutu, Yaa Gyasi, Hank Willis Thomas, Knopf, Random House, The New York Times, Harvard, NYU, Tumblr, and Black Lives Matter. Ossei-Mensah was the 2017 Critic-in-Residence at Art Omi and currently serves as a mentor in the New Museum’s incubator program, NEW INC., in addition to being a member of MoMA’s Friends of Education.

Images
High-resolution images are available through this link: bit.ly/AllisonJanaeHamiltonPitch

Gallery admission is $20 for adults, $18 for veterans and seniors, $12 for students, $8 for children 6 to 16, and free for children 5 and under. Members are admitted free year-round. The Hall Art Foundation’s Anselm Kiefer exhibition is seasonal and will reopen on May 26, 2018. For additional information: 413.662.2111 x1 or visit massmoca.org.

Hours
MASS MoCA is open from 11am to 5pm, closed Tuesdays, through June 22. From June 23 through September 3, MASS MoCA’s galleries are open seven days a week — from 10am to 6pm Sundays through Wednesdays and from 10am to 7pm Thursdays through Saturdays.