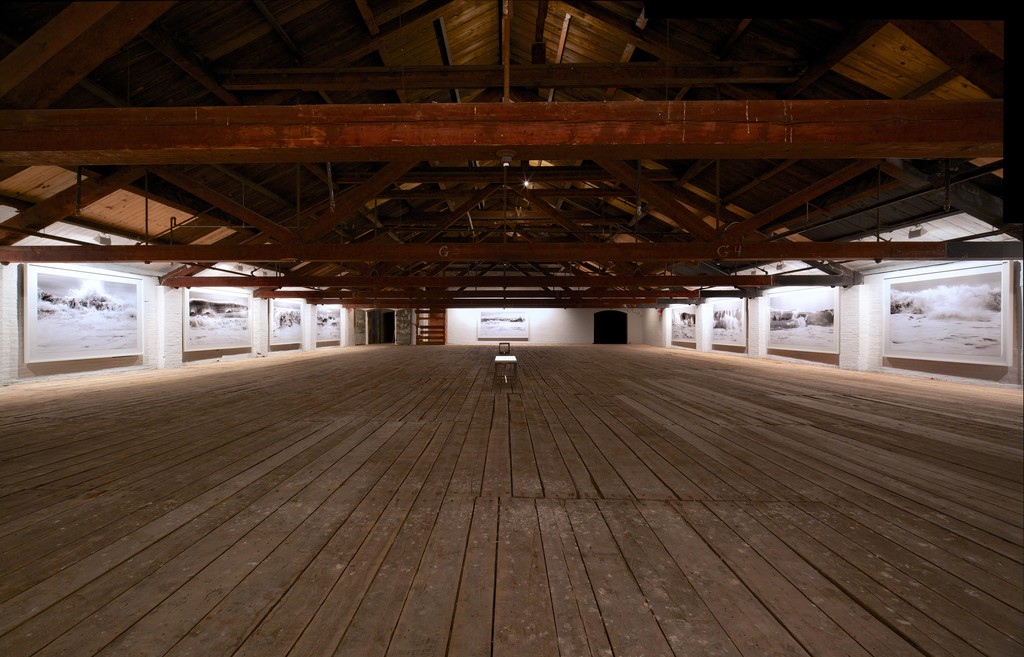 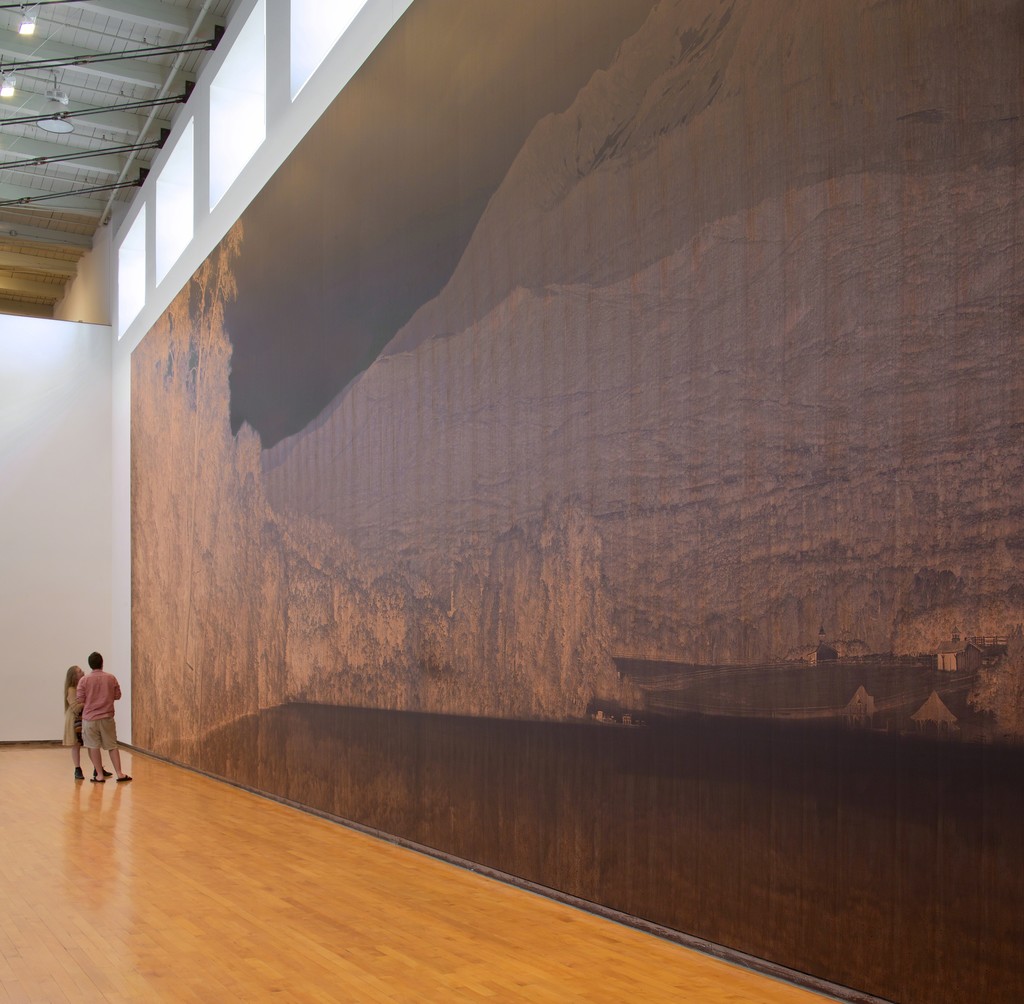 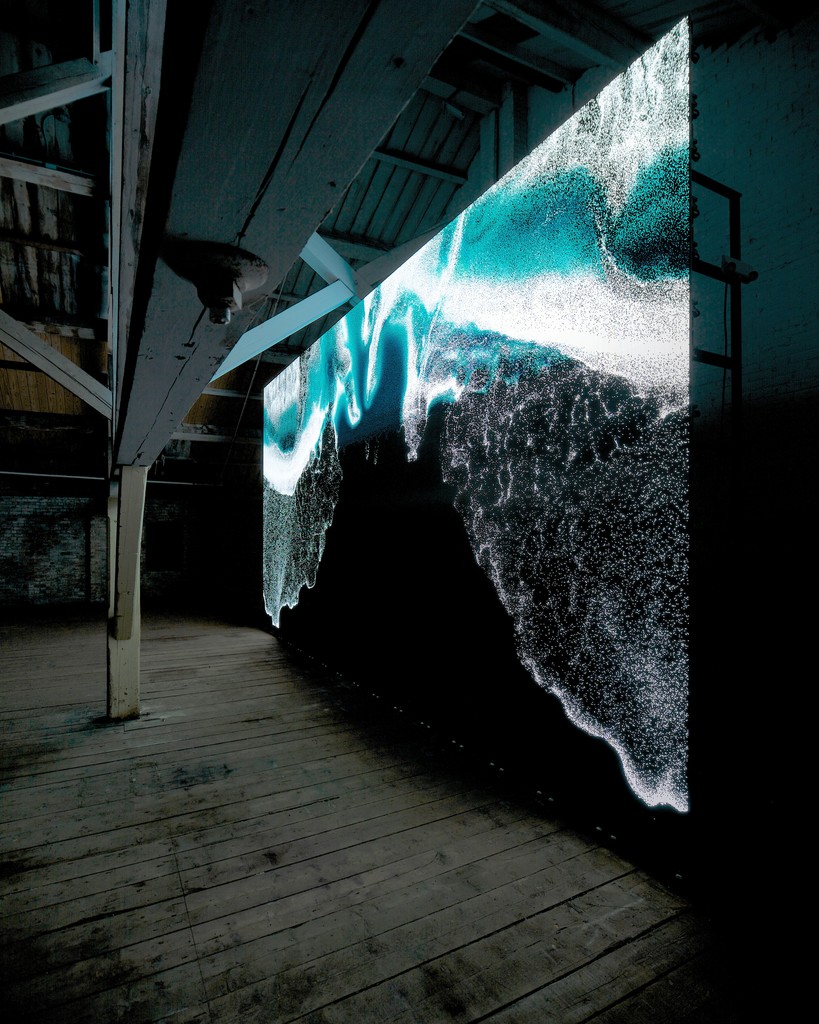 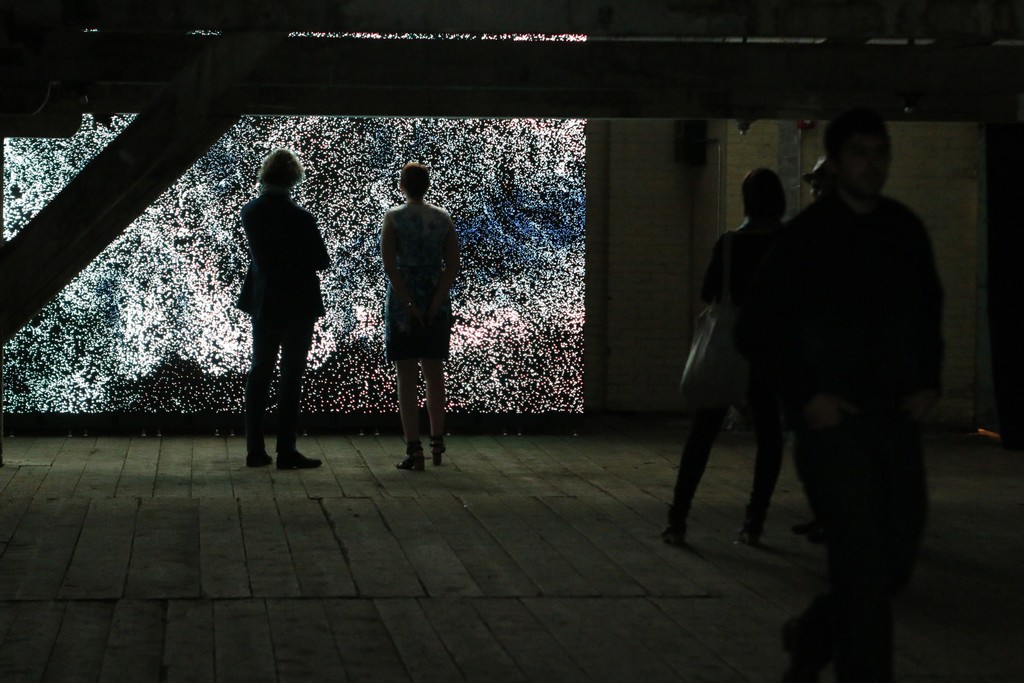 North Adams, Massachusetts — In this major mid-career museum survey, Landscape Seen & Imagined documents Clifford Ross’s longstanding project to reconcile realism and abstraction. The exhibition takes place throughout two buildings, six galleries, and an exterior performing arts courtyard. Among other works, the exhibition includes a 24’ high x 114’ long photograph on raw wood that spans the length of MASS MoCA’s tallest gallery and an immersive installation of animated video on twelve separate 24’ high screens. Ross’s hyper-detailed photographs of hurricane waves and mountains are included along with a new “invisible art” project featuring animated virtual elements only accessible by means of the viewer’s smartphone. The exhibition opens on May 23, 2015, with a reception for the artist, followed by a second phase beginning June 26, 2015, which launches the immersive outdoor video installation and the augmented reality experience.

“While this show is about acute observation and the leaps into abstraction that can happen with close viewing, it is also about the divergence between the world as we see it and as we imagine it might be,” notes MASS MoCA Director Joseph Thompson.

Large-scale high-resolution photographic works are the source material and centerpiece of Ross’s exhibition. For his Hurricane series, Ross wades into the surf while tethered to land, capturing vivid images of ocean waves during severe coastal storms. For his Mountain series — which takes Mount Sopris near Aspen, Colorado, as its subject — Ross invented and patented his so-called R1 camera, using it to create some of the highest-resolution single-shot landscape photographs ever produced.

To reach what Ross calls “the essence of my subject,” the artist makes imaginative and inventive use of both traditional and new media, including printing on unexpected surfaces, ambitious computer rendering techniques, and startling, architecturally scaled applications of augmented-reality software. Equal emphasis is given to multimedia works that embrace unusual forms of abstraction drawn from minutely detailed observations of nature.

In the museum’s tallest gallery, for example, Ross’s Harmoniums — small details extracted from the large Mount Sopris image and then accentuated with bright hues — are made visible to visitors through their smartphones. Juxtaposed against the stark power of the mountainscape — which is rendered as a negative in black ink — the Harmoniums infuse the viewing experience with color and interactive movement.

The exhibition also includes a new series of video works entitled Digital Hurricane Waves, shown in a minimally improved, 12,000 square-foot space never before utilized at MASS MoCA. Within a loft-like trussed gallery adjacent to the space containing the first American exhibition of Ross’s new large-scale Hurricane prints, computer-generated renderings of complex fluid dynamics are projected onto large screens, which combine to form what the artist calls a Wave Cathedral.

Deeply anchored in tradition, Ross’s radical and technologically advanced Mountain photographs are influenced by his fascination with Albert Bierstadt’s and Frederic Church’s iconic views of the American West, which he studied while at Yale University and which he has described as “my salvation from the certain death of a narrow aesthetic inheritance — namely Clement Greenberg’s formalism and the Color Field tradition I was born into.” Ross embraces Turner, Courbet, Hokusai, and 19th-century photographer Gustave Le Gray as predecessors to his Hurricane series. His interest in the interplay of realism and abstraction — the seen and imagined — relies on sources that range from Rembrandt to Pollock, Cezanne to Northern Sung painter Fan Kuan.

About the Artist
Clifford Ross (born in 1952 in New York City) earned a B.A. in art and art history from Yale University in 1974. Following an early career in painting and sculpture, Ross began his photographic work in 1994. His milestone Hurricane series was commenced in 1996. Ross’s recent collaborations include a multimedia installation with Pan Gongkai, president of the Central Academy of Fine Arts in Beijing, and a 3.5 ton, 28' x 28' stained glass wall with architects Mack Scogin and Merrill Elam for the U.S. Federal Courthouse in Austin, Texas. Ross is a visiting artist with the NYU Tisch School of the Arts’ Interactive Telecommunications Program, contributing editor for BOMB and Blind Spot magazines, and editor of Abstract Expressionism: Creators and Critics (Abrams), and serves as Chair of the Helen Frankenthaler Foundation. His work has been widely exhibited in galleries and museums in the United States, as well as in Europe, Brazil, and China, and can be found in numerous public collections, including the Museum of Modern Art, the Metropolitan Museum of Art, and the Solomon R. Guggenheim Museum in New York City; the J. Paul Getty Museum, Los Angeles; and the Museum of Fine Arts, Houston.

The first book, devoted to Hurricanes, is edited by Jay Clarke, curator of prints, drawings, and photographs at the Clark Art Institute, and includes authors’ essays by Phong Bui, curator, art critic, editor, and publisher of the Brooklyn Rail; Ms. Clarke; Orville Schell, environmentalist, art critic, contributing author to The New Yorker and director of the U.S.-China Institute at the Asia Society, New York; and the first part of a two-part interview with the artist by Mr. Schell.
The second book includes texts by David Anfam, author of the Mark Rothko catalogue raisonné and the forthcoming Clyfford Still catalogue raisonné and senior consulting curator, Clyfford Still Museum; Quentin Bajac, chief curator of photography, the Museum of Modern Art, New York; Arthur C. Danto, art critic for The Nation and Johnsonian Professor Emeritus of Philosophy, Columbia University; Jack Flam, art historian, Distinguished Professor of Art and Art History at Brooklyn College, and The Graduate Center of the City University of New York; Nicholas Negroponte, Chairman Emeritus and Founder of the MIT Media Lab and author of Being Digital; and Jock Reynolds, director of the Yale University Art Gallery, New Haven, Connecticut; and the second part of a two-part interview with the artist by Mr. Schell.

Images
A collection of high-resolution images is available here: bit.ly/1zw1aBd.

About MASS MoCA
MASS MoCA is one of the world's liveliest (and largest) centers for making and enjoying today's most important art, music, dance, theater, film, and video. Hundreds of works of visual and performing art have been created on its 19th-century factory campus during fabrication and rehearsal residencies, making MASS MoCA among the most productive sites in the country for the creation and presentation of new art. More platform than box, MASS MoCA strives to bring to its audiences art experiences that are fresh, engaging, and transformative.