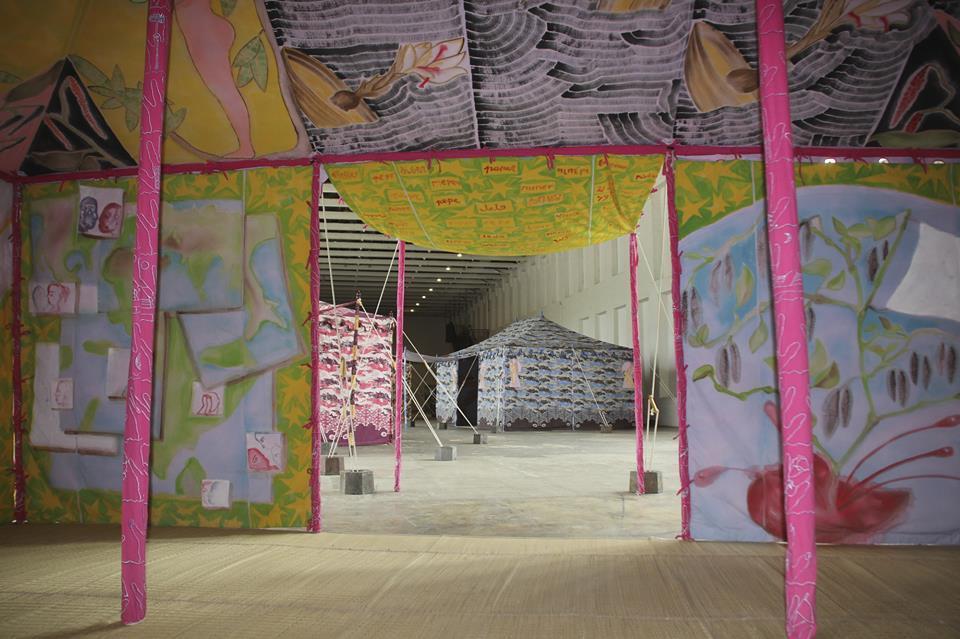 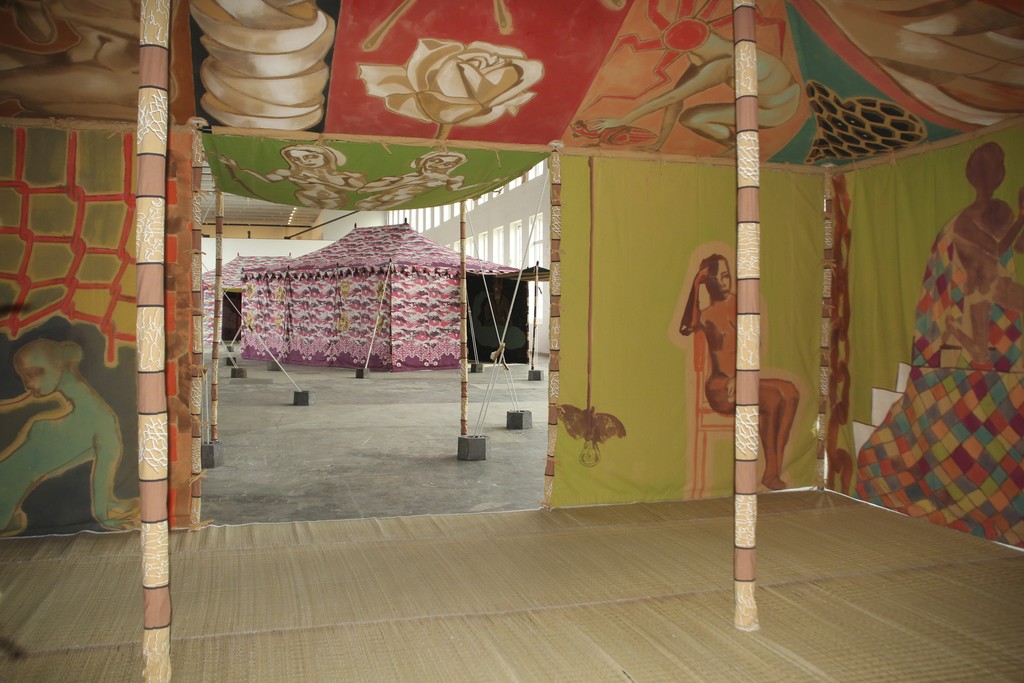 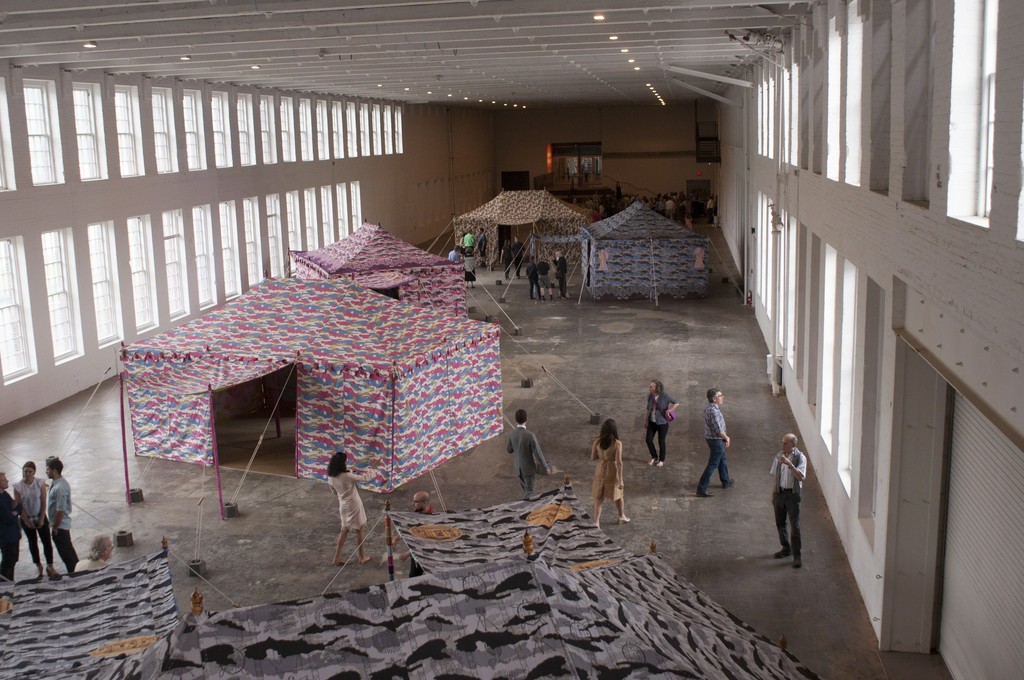 “I’m told I am a nomadic artist,” artist Francesco Clemente once dryly noted. In Encampment — a multi-part 30,000 square foot installation occupying MASS MoCA’s largest gallery — Clemente’s transitory experience of changing geographies, diverse cultural climates, and indeed consciousness itself infuses his imagery and art with a particularly rich range of references and meaning. For the past three decades Clemente has traveled often, dividing his work and primary residences between Varanasi, India, and New York. Informed by the logistical realities and production opportunities of making art in wildly disparate locations, his aesthetic investigation of states of flux delves into the nature of passage itself. “I believe in this movement of generating and dissolving, and regenerating and dissolving again — this is a technique for the mind to become and remain awake,” Clemente explains. Passages between bodily pleasure and changing spiritual states, between acts of destruction and creation, and between the seen and unseen are all at the heart of Encampment, opening at MASS MoCA in North Adams on June 13, 2015, and remaining on view through early January 2016.

The show’s centerpiece — gathered at MASS MoCA for the first time as a complete ensemble — is a suite of six painted canvas tents, which, as Clemente noted, “were generated by reflection on my own life, and my own needs; it was as if I didn’t have a home, but wanted one.” Created over the course of three years from 2012 through 2014, in collaboration with a community of artisans in Rajasthan, India, the large 2-pole structures (each measuring some 10’ x 18’ x 12’ high) transform MASS MoCA’s signature Building 5 gallery into a kind of tent village, inhabited by painted human figures both supine and in motion, and emblematic symbols and signs both obvious and arcane. Secured in place by ropes and special cast-iron weights, the exteriors of the large bamboo and fabric tents are richly decorated with hand-printed woodblock designs, carved after drawings by Clemente. The patterns recall the camouflaging on the uniforms and gear of the Indian Army in Rajasthan — the visual resonance of which is heightened by the region’s complex social, political, and military relationship with Pakistan, whose border it shares. Closer inspection of the camouflage patterns reveals esoteric texts, embedded icons, human silhouettes, and other subtle signs, all intricately outlined with hand-embroidered gold-colored thread. Inside the tents, walls, ceilings, and entryways are awash in richly toned jewel-like paintings. Depictions of love and carnal desire are juxtaposed with trompe l’oeil paintings of framed portraits of Clemente, for example, in which the artist’s arm and hand reach through the frame, grasping towards viewers. Implicating our very presence in the museum, Clemente draws visual parallels between erotic voyeurism and the spectatorial enjoyment of art.

As an installation, the tents combine to create a beautiful world of color and strangely alluring hospitality. Passing by and through the tents, the viewer is led to a darkened, theatrically lit space, where Clemente presents four large-scale sculptures. Resembling altars or guideposts that at first appear to be fabricated of wood and other organic materials, the vertical sculptures are, in fact, built and cast from aluminum. The four works — Earth, Moon, Sun, and Hunger — incorporate both traditional forms and references to contemporary life: in Moon, for example, a bronze-colored stereo sits atop a metal work box balanced precariously atop a base made from silvery branches. Taken together, the works suggest both a maker and viewer in states of transitory suspension, caught, perhaps, between a life lived directly, without mediation, and reality experienced one step removed, as an observer, or as a consumer of culture. Quoting Guy Debord’s seminal text, The Society of the Spectacle, the flag that hangs from the top of Hunger is embroidered with the words “the spectator feels at home nowhere because the spectacle is everywhere.”

In a third mezzanine gallery overlooking the tent encampment, the exhibition includes a stunning new suite of 19 erotically charged paintings, rendered in bright washes of watercolor and exquisitely detailed brushwork in solid body ink. Drawing on the tradition and craft of Mughal miniature painting, the watercolors combine decorative motifs with dreamy imagery that shifts between abstraction and figure painting. Sharply juxtaposing abstract interludes with scenes of love and intense desire, the paintings layer textures and color forms in ways that appear almost collage-like in their spatial complexity. The finely detailed, hand-painted miniature patterns in gouache an unusual visual register to the transparent watercolors, layering silhouetted bodies in sinewy vines and other organic shapes, and confusing traditional distinctions between figure and ground. In India, Clemente “found a place that was utterly contemporary and with the same vitality and drive that I knew of in the West, but in completely alternative terms.” In this new series of paintings, he draws on Indian and Western European traditions to create a hybrid visual language with which to relate intimate tales of sensual and spiritual encounter.