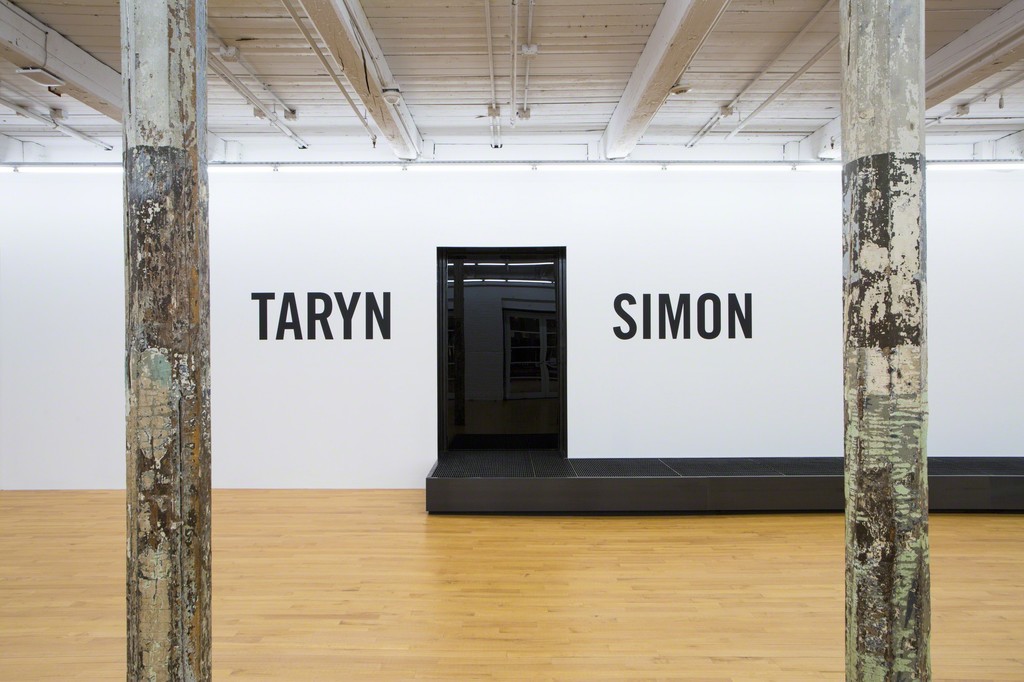 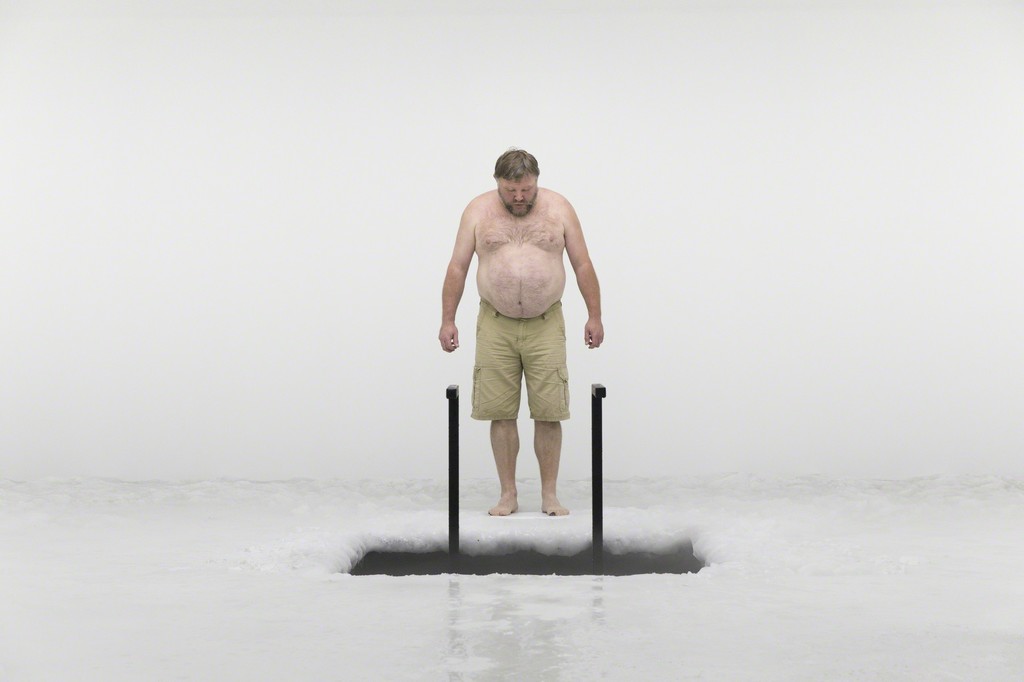 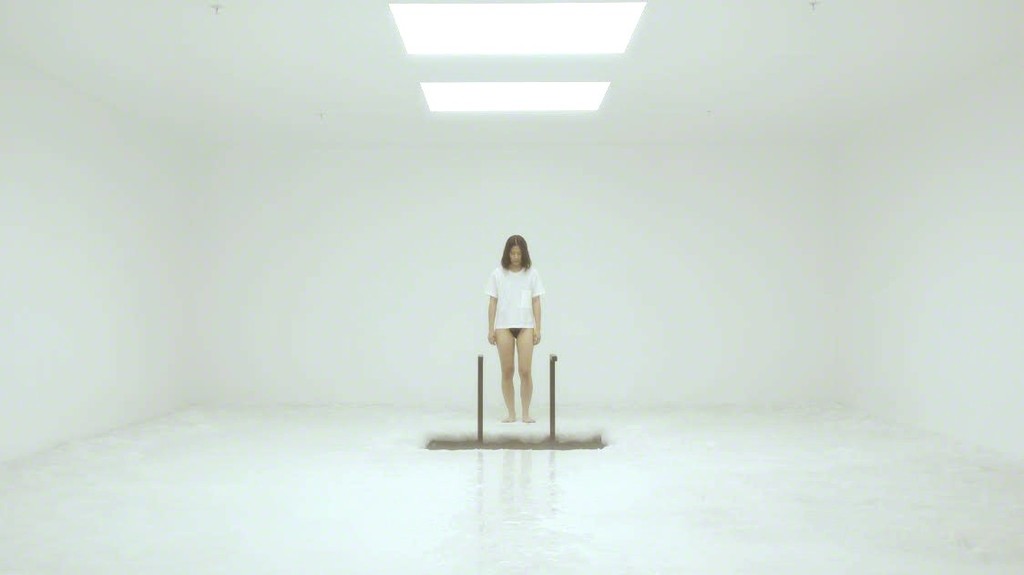 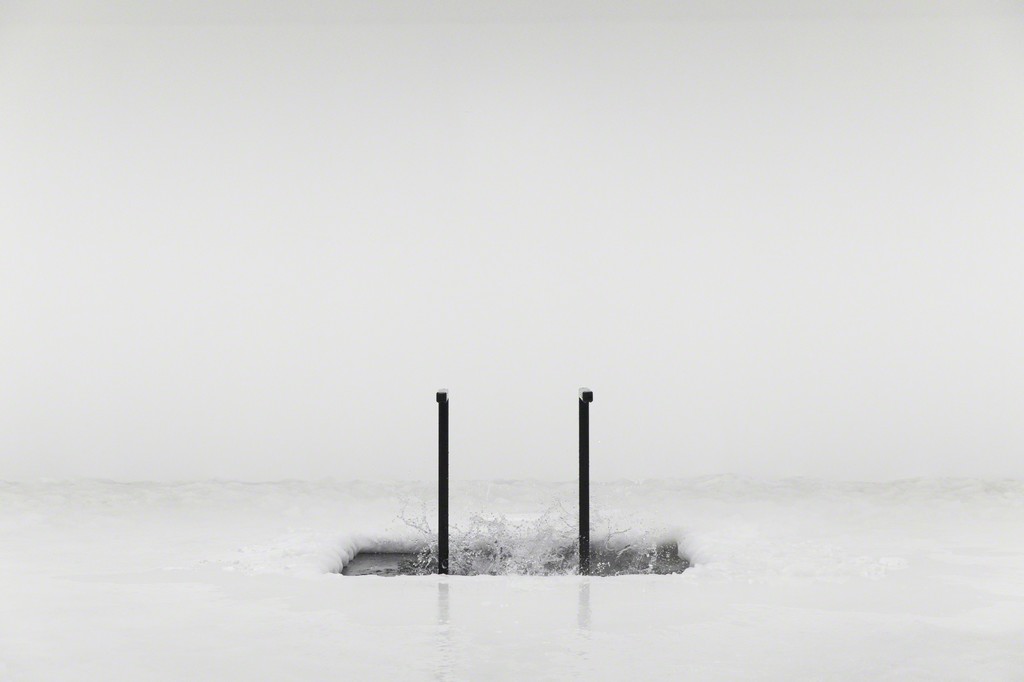 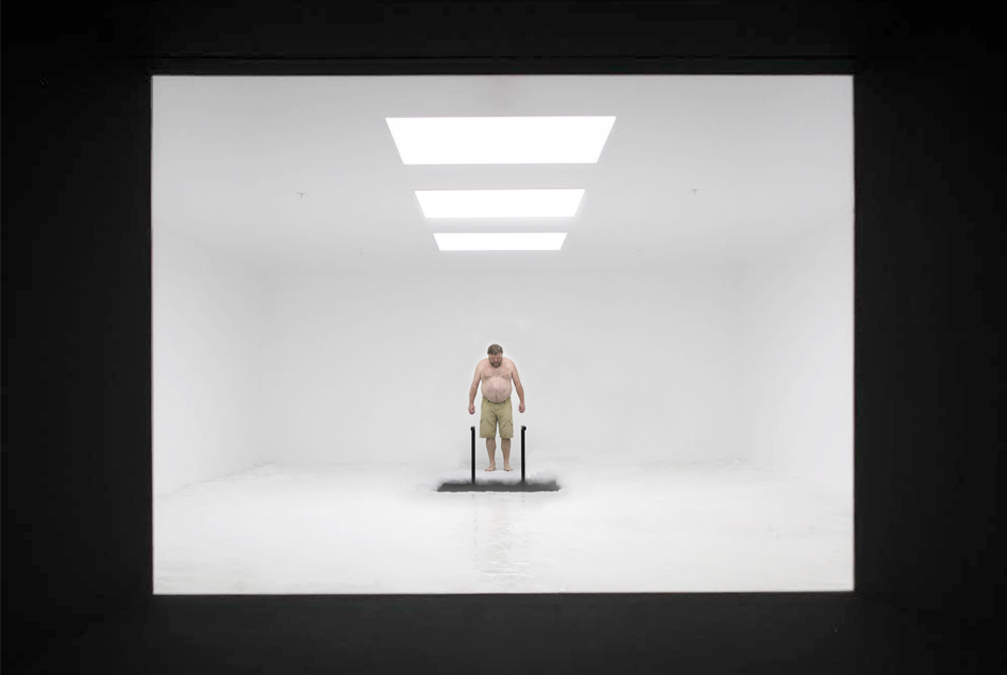 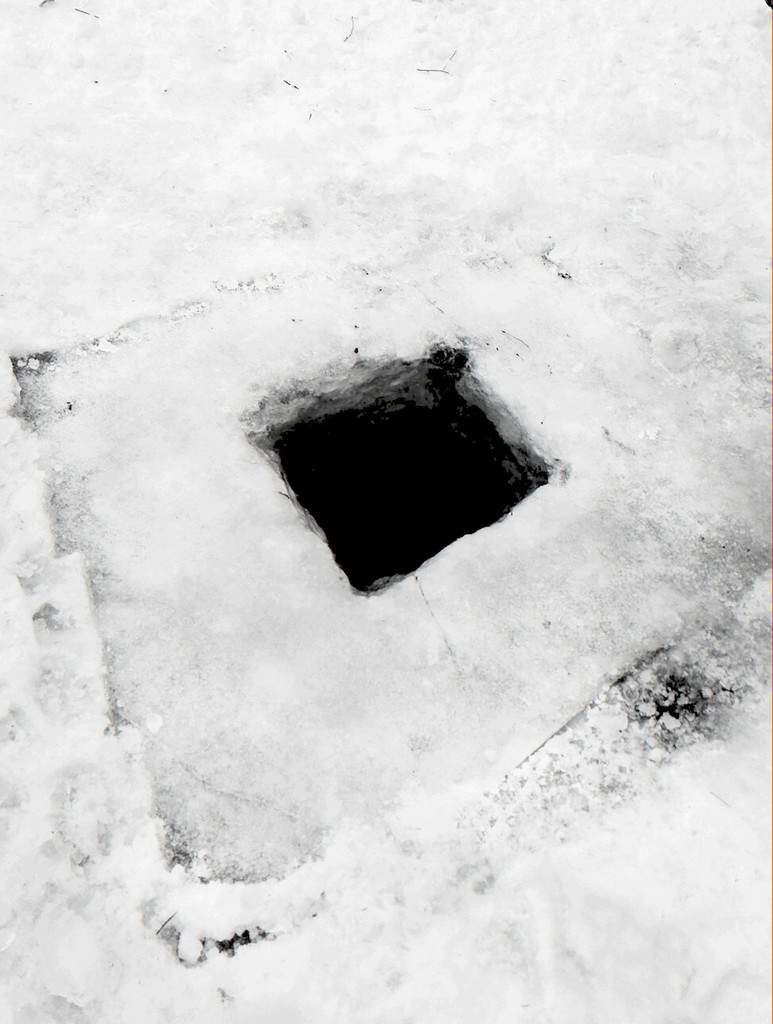 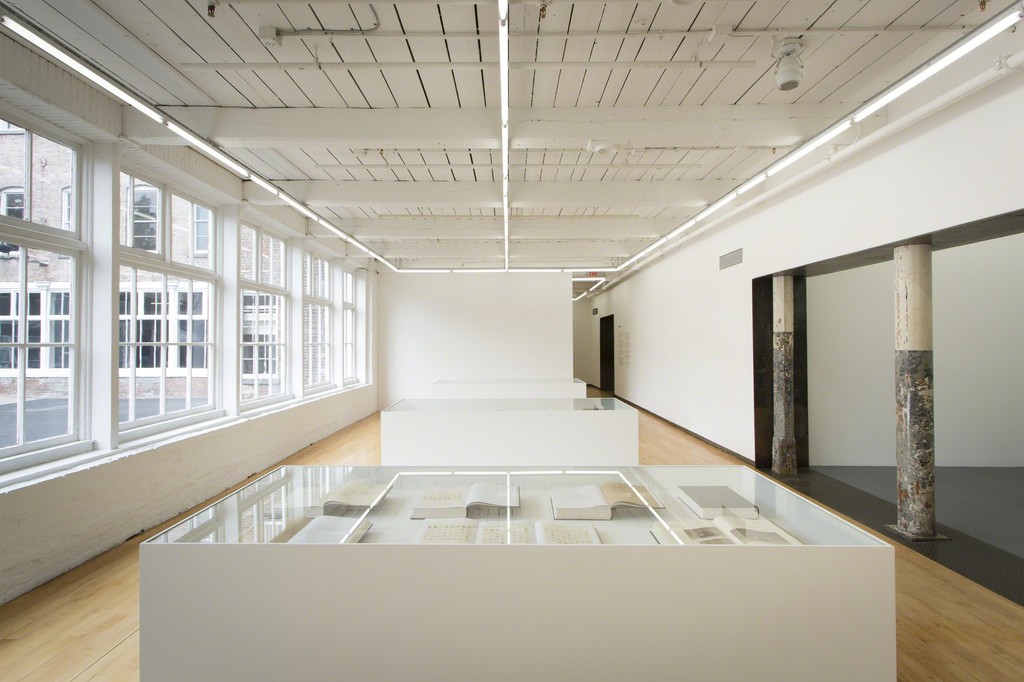 In an ambitious exhibition featuring two new installation-based commissions, artist Taryn Simon activates the rituals of applause and the cold water plunge, examining individuals’ campaigns for public admiration, the status of physical community spaces in the digital age, and our persistent desire for a quick fix. Simon’s exhibition opens at MASS MoCA on Saturday,
May 26, with a reception that evening.

Children learn to seek applause from an early age — an ambition for approval that continues to shape public performances. Clapping transmits contagiously: individuals clap to signal consensus, out of love, to join the crowd.

Rooted in the artist’s longtime interest in the systems that support power structures, and building on her recent work with sound, thresholds, and sculpture, Simon’s uncompromising, timely exhibition examines how public performance collides with private intentions and experiences. Filling the museum’s expansive first-floor galleries, Simon’s exhibition features large-scale immersive works — Assembled Audience and A Cold Hole — as well as the first-ever major museum installation of the artist’s bookwork.

In the dark interior of Assembled Audience, visitors are consumed by a densely layered soundscape of percussive strikes — thousands of individually recorded claps, which Simon has composed to generate a new virtual crowd. In A Cold Hole, the gallery floor is replaced by an expanse of solid ice with a single square hole cut from its center. Both visitors and performers are intermittently invited to jump into the icy water below. Visitors can view A Cold Hole through a cinemascopic aperture from a darkened adjacent gallery.

Clapping and cold-water immersion have historically functioned as modes for public demonstration, proof of worship or praise, and as a means by which individuals seek reassurance and empowerment. In this exhibition, Simon isolates and inverts elements of each practice to reveal the intersection of physical action, communal spectacle, and the desire for personal fulfillment.

In addition to the two new installation works, the exhibition includes the first major museum installation of Simon’s bookwork. Since the inception of her earliest projects, bookmaking has played an integral role in her work. The technical, physical, and aesthetic realization of Simon’s bookwork — including graphic design, font choice, image organization, and the language itself — reflects the control and authority that are the very subject of her work. The installation will include all of Simon's bookwork to date, from The Innocents (2003) through An Occupation of Loss (2018).

Assembled Audience
Accounts of leaders using applause as a barometer of public opinion can be traced as far back as ancient Rome. Professional “claques” have been hired since antiquity to incite audiences to applaud at speeches, plays, and other public events, simulating approval and popularity. A system of microphones and amplifiers installed at the Nuremberg stadium allowed cheers and chants of “Heil Hitler!” to be projected back towards the crowd at Nazi party rallies. Today, artificial bots leave “likes” and comments online to bolster visible and contagious approval.

Drawing on the notion of engineered applause, in Assembled Audience Simon compresses individuals of varying corporate, ideological, and political allegiances into a single crowd. Over a one-year period, she worked with a team of local producers in Columbus, Ohio, to record the isolated applause of one person from each event held at three of the city’s largest venues: the Greater Columbus Convention Center, Nationwide Arena, and Ohio State University’s Jerome Schottenstein Center. Located in the heart of the United States’ most accurate bellwether state, Columbus is a critical gauge for predicting political outcomes and testing new commercial products. Every successful U.S. presidential candidate of the past two decades campaigned at one or more of these venues –– Donald Trump, Barack Obama, Bill Clinton, George W. Bush –– and every candidate who won Ohio went on to win the general election. Often identified as “Test City, USA,” Columbus’ demographics –– including education, race, and income –– closely mirror those of the entire country. Many of America’s largest grocery, fast food, and retail companies –– including Kroger, McDonald’s, Starbucks, Abercrombie & Fitch, and Victoria’s Secret –– use the city to test new product offerings and marketing strategies.

Applause tracks recorded at each of the three venues were isolated from events, including the Worship Awakening Conference; The 78th Conference on Glass Problems; The Columbus Blue Jackets vs. New York Rangers; Black Women Empowerment Conference; Professional Bull Riding; and concerts by the Trans-Siberian Orchestra, The Weeknd, Kid Rock, and Katy Perry. The title of each event is documented on the gallery wall, along with the names of the individuals recorded from each audience. Recordings will continue to be collected over the course of the exhibition and will be added to the composition.

A Cold Hole
In a cold-water plunge, the body is thrust into an extreme state, prompting an immediate flight response that individuals must meet with vigorous determination in order to endure. The rapid immersion delivers a physical and mental shock, slowing one’s heart rate and sympathetic nervous system –– disrupting and altering thought processes. Scientists have observed a correlation between the initial gasp upon submersion in very cold water and the “arrhythmogenic trigger” in sudden death, birth, and sleep.

Cold-water immersion has historically been used to provide rapid course correction, self-improvement, and psycho-spiritual “reset.” Participants have included Pliny the Elder, Charles Darwin, Theodore Roosevelt, Nellie Bly, and Tony Robbins. Ritual plunges have been described by those who partake in them as spiritually and psychically cleansing, effective in staving off illness, and bolstering strength, alertness, and vigor.

In Simon’s A Cold Hole, participants experience the effects of frigid water, as visitors observe from an adjacent gallery. Within the gallery, Simon arrests time –– creating a space of perpetual winter.

About the artist
A multidisciplinary artist working in photography, text, sculpture, and performance, Taryn Simon (b. 1975) creates work resulting from rigorous research guided by an interest in systems of categorization and the precarious nature of survival. Simon’s works have been the subject of exhibitions at the Louisiana Museum of Modern Art, Copenhagen (2016-17); The Albertinum, Dresden (2016); Galerie Rudolfinum, Prague (2016); Garage Museum of Contemporary Art, Moscow (2016); Jeu de Paume, Paris (2015); Ullens Center for Contemporary Art, Beijing (2013); Museum of Modern Art, New York (2012); the Tate Modern, London (2011); Neue Nationalgalerie, Berlin (2011); and Whitney Museum of American Art, New York (2007). Permanent collections include the Metropolitan Museum of Art, New York; the Tate Modern, London; the Guggenheim Museum, New York; Centre Georges Pompidou, Paris; and the Los Angeles County Museum of Art, Los Angeles. Her work was included in the 56th Venice Biennale (2015). Simon’s installation, An Occupation of Loss (2016), co-commissioned by the Park Avenue Armory and Artangel, premiered in New York in 2016. An Occupation of Loss, presented by Artangel, will premiere in London in 2018. Simon is a graduate of Brown University and a Guggenheim Fellow. She lives and works in New York.

Images
High-resolution images are available through this link: bit.ly/TarynSimonMM18

Gallery admission is $20 for adults, $18 for veterans and seniors, $12 for students, $8 for children 6 to 16, and free for children 5 and under. Members are admitted free year-round. The Hall Art Foundation’s Anselm Kiefer exhibition is seasonal and will reopen on May 26, 2018. For additional information:
413.662.2111 x1 or visit massmoca.org.

Hours
MASS MoCA is open from 11am to 5pm, closed Tuesdays, through June 22 (open Tuesday, February 20). From June 23 through September 3, MASS MoCA’s galleries are open seven days a week — from 10am to 6pm Sundays through Wednesdays and from 10am to 7pm Thursdays through Saturdays