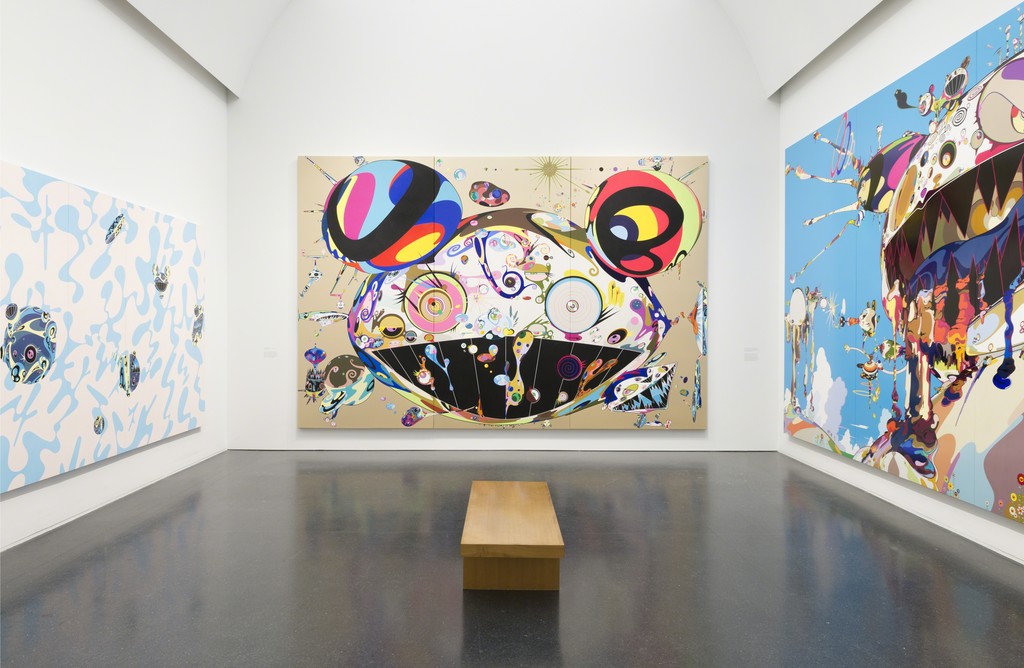 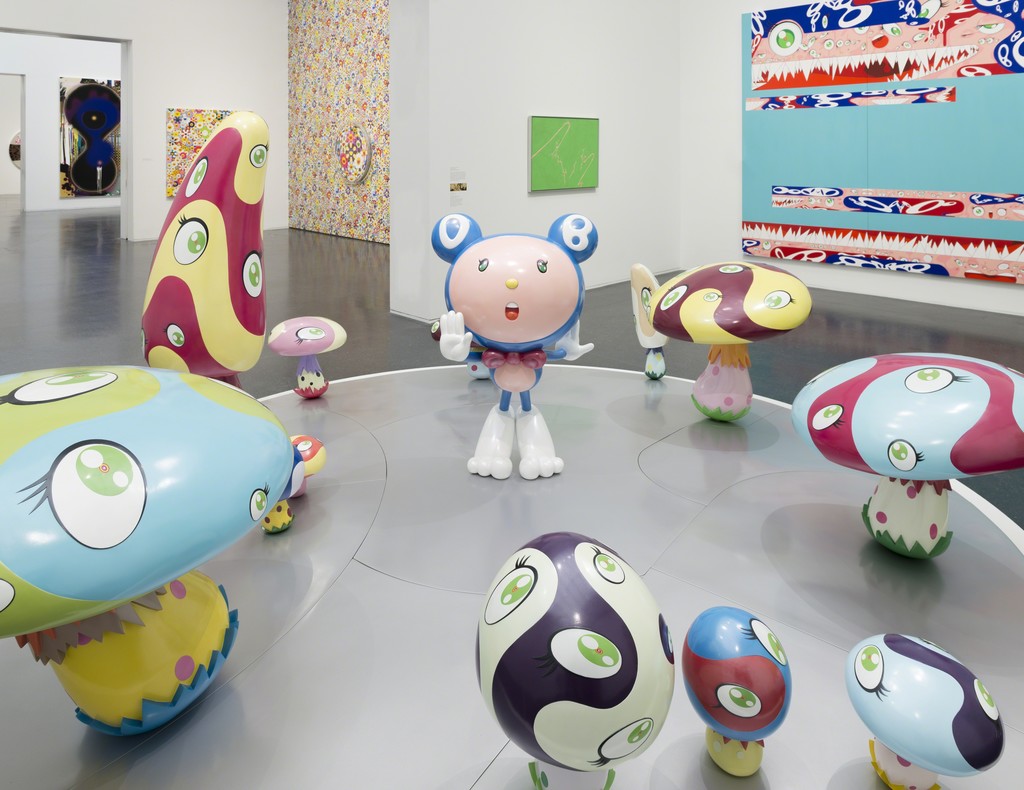 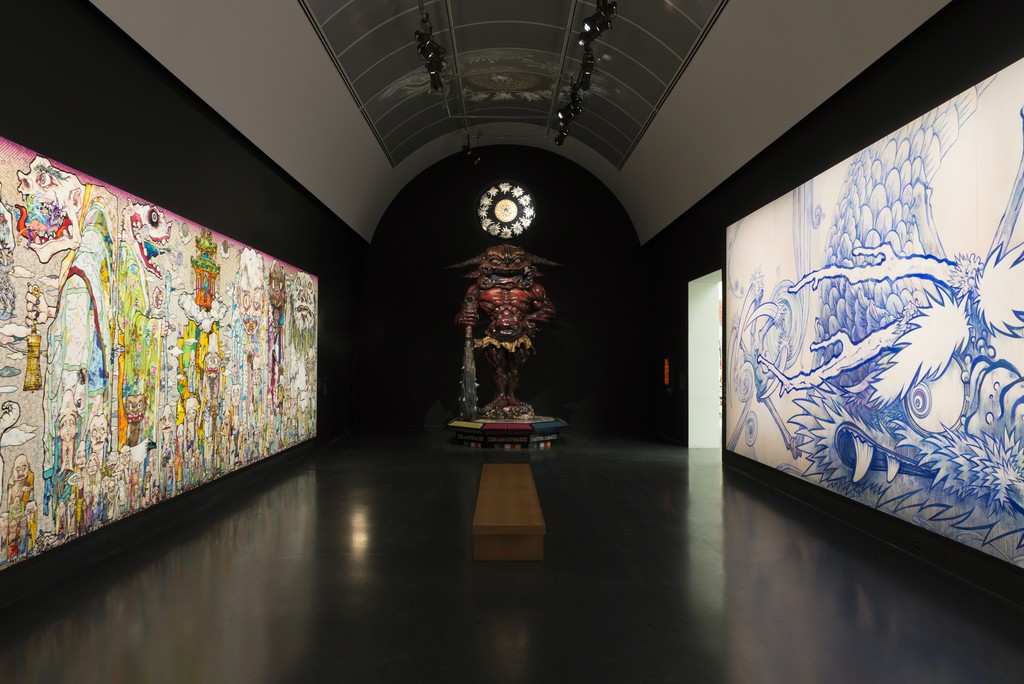 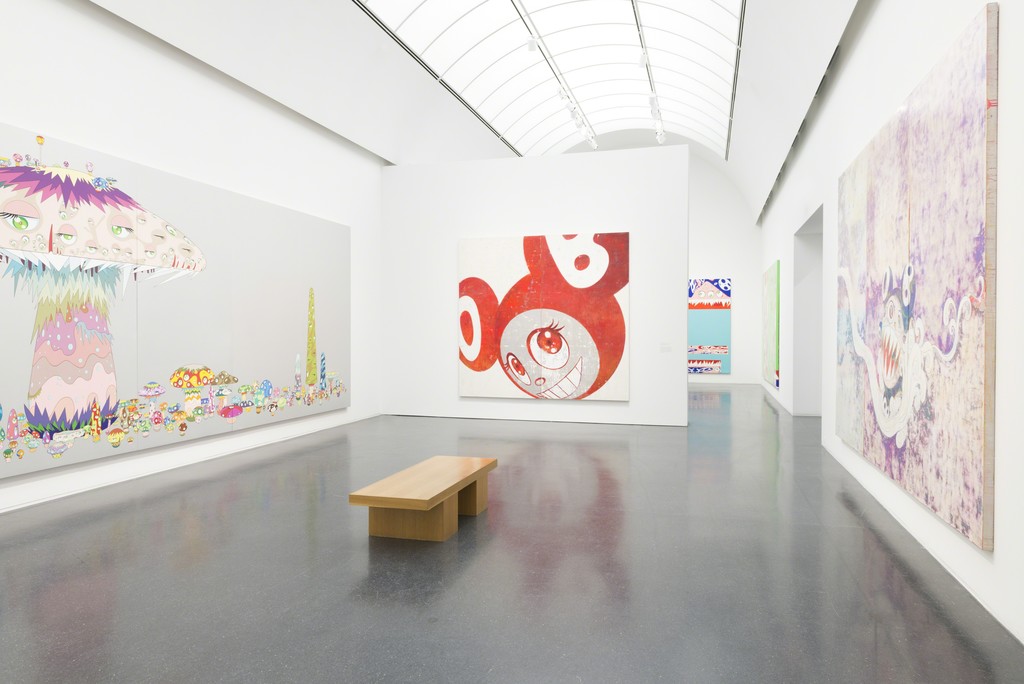 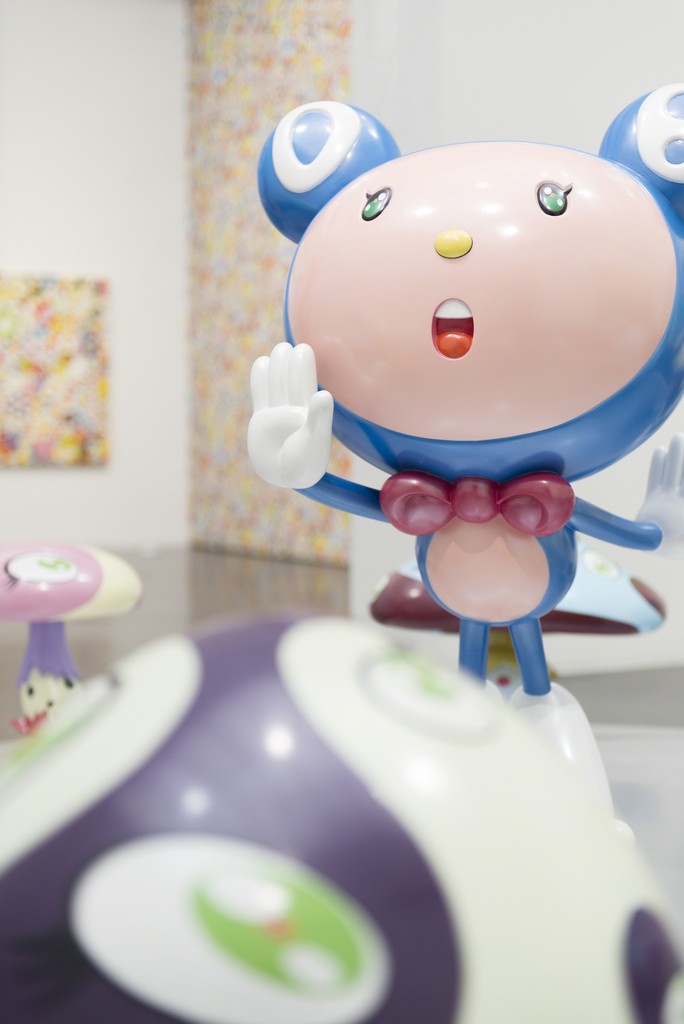 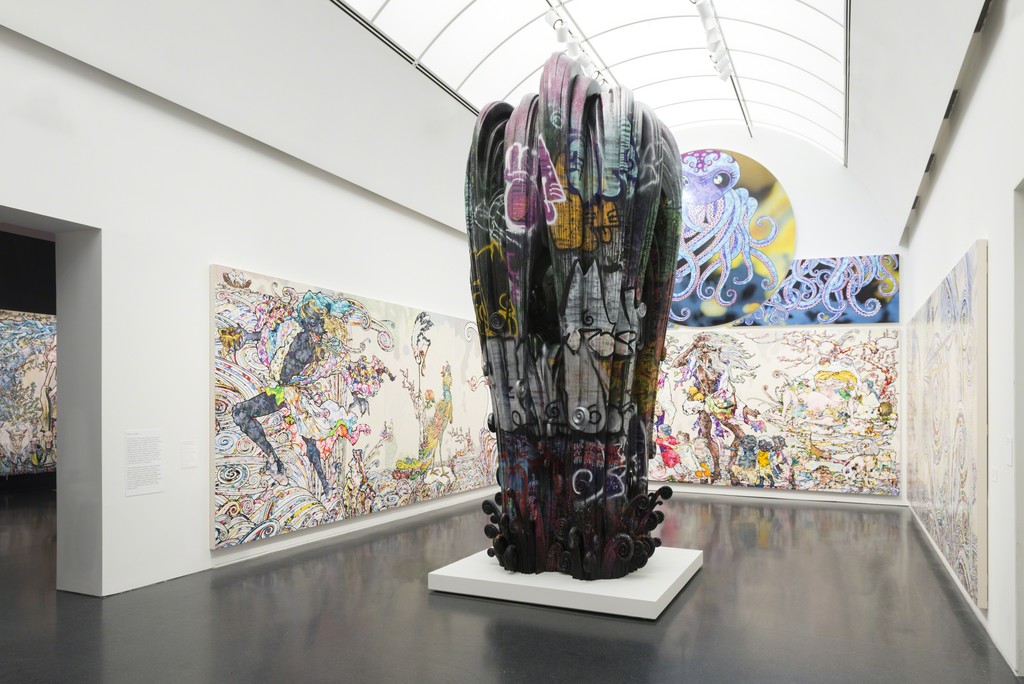 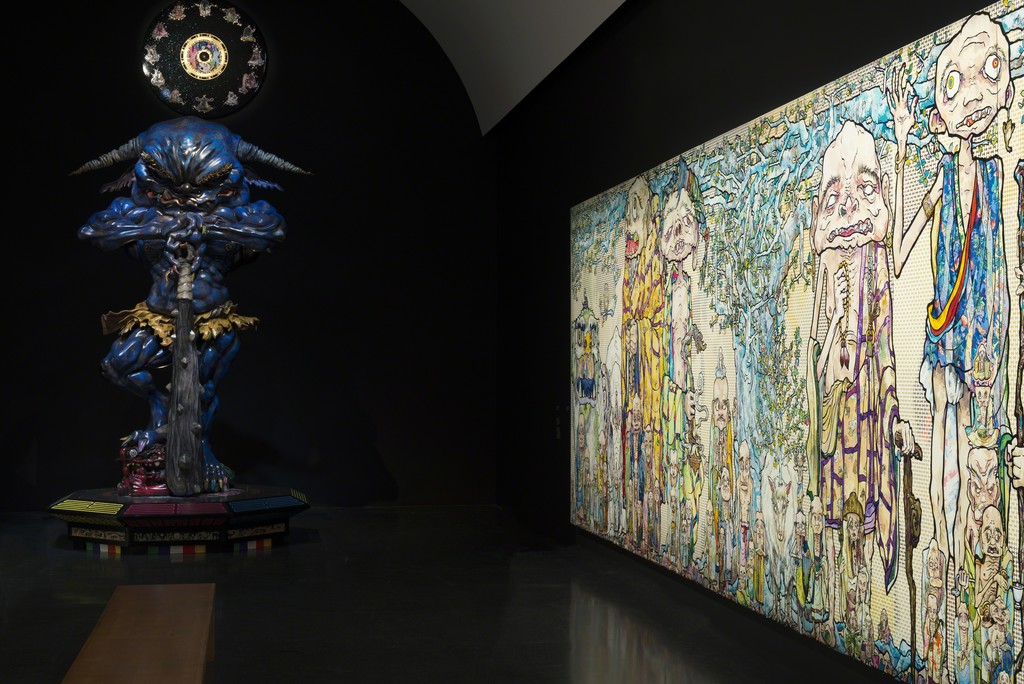 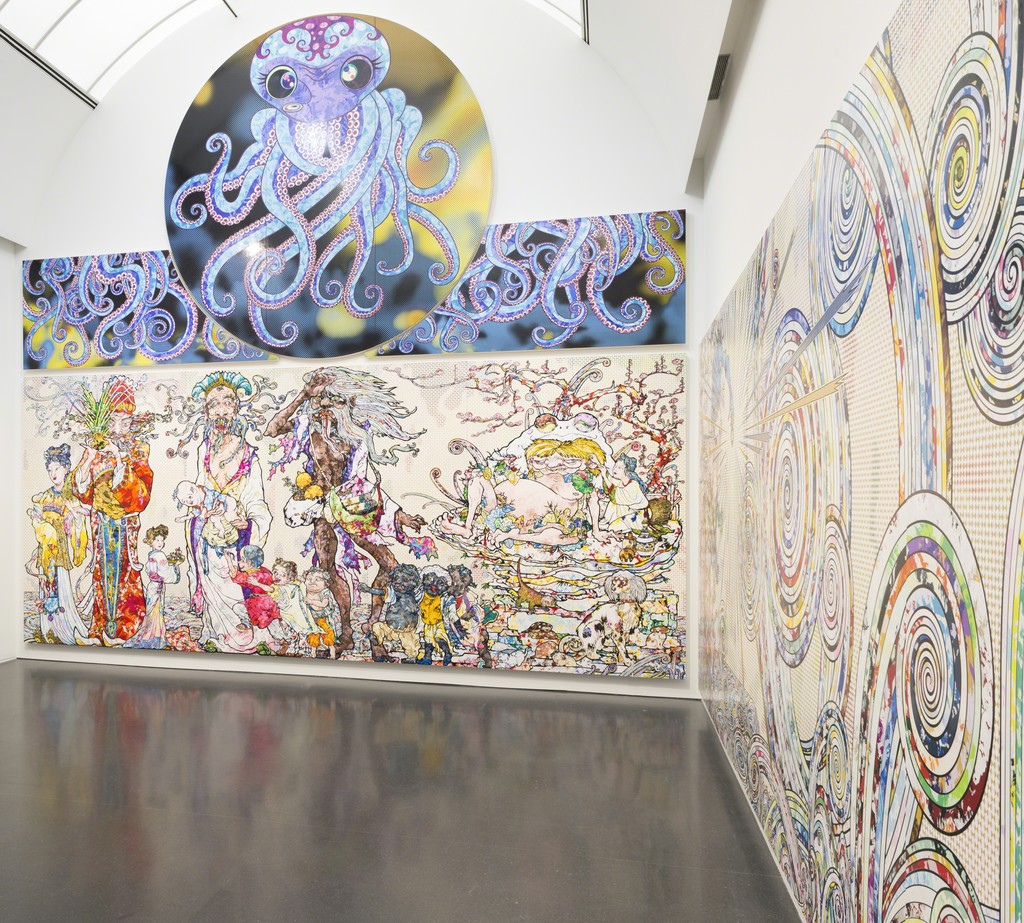 This summer, the Museum of Contemporary Art Chicago presents the highly anticipated major retrospective Takashi Murakami: The Octopus Eats Its Own Leg, showcasing more than three decades of Murakami’s paintings from his earliest mature works—many of which are being shown in North America for the first time—to his most recent, never-before-seen paintings. Across over fifty works, this seminal exhibition of extraordinary, monumental paintings reveals the consistent, universal themes that have guided his work, reflecting his exquisite level of craft and insightful engagement with history. Takashi Murakami: The Octopus Eats Its Own Leg is curated by MCA Chief Curator Michael Darling and is on view at the MCA Chicago from June 6 to September 24, 2017. The exhibition is presented in partnership with ComplexCon.

One of the most imaginative artists working today, Murakami has created a colorful cast of characters inspired by folklore, art history, and popular culture, that blurs the boundaries between high and low, ancient and modern, eastern and western. His signature style, which he calls “Superflat,” pairs traditional Japanese painting techniques with a contemporary, animé-inspired aesthetic within a flattened picture plane. For this exhibition, Murakami has produced a new group of paintings that are being shown for the first time, including The Octopus Eats Its Own Leg, a 114-foot masterwork made up of over 35 panels that surround visitors in the gallery. The title of this work and the exhibition is a Japanese folk saying that hints at the process of rejuvenation. An octopus in distress can chew off a damaged leg to ensure survival, knowing that a new one will grow in its place. Similarly, Murakami often feeds off his own prior imagery, or that of Japanese history, in order for new work to emerge.

Murakami is widely known for both his fine art and commercial output—including collaborations with pop icons such as Kanye West and fashion house Louis Vuitton—and this exhibition presents the first serious survey of his work as a painter. It provides a sustained analysis of the artist's relationship to the traditions of Japanese painting while borrowing from the Pop Art tradition. Murakami picks up visual cues from the world of mass production and playfully equates himself with a corporate entity. These works can be seen as an early example of Murakami’s interest in the power of branding and global commercialism.

Influenced by animated films (anime), comic books (manga), and global branding, Murakami created Mr. DOB, a recognizable character that would be his cartoon-ish alter-ego. This stylized mouse character continues to evolve to this day. Part brand ambassador, part self-portrait, Mr. DOB has paved the way for other characters throughout the artist’s career. From his first, highly simplified version in 1993, Mr. DOB would become more complicated as time went on, turning into a radioactive mutating monster, but the core characteristics of round face and ears with the letters D, O, B are always consistent.

The continual adaptation of his iconic Mr. DOB figure reveals Murakami’s interest in the mutant form stretching back to his earliest Nihonga paintings. Shown together, Murakami’s cast of characters, including DOB as well as his palette of signature motifs, like anime eyes, jagged teeth, and bulbous letterforms, became demonstrations for the fluidity of his Superflat concept, a visual skin that could spread over and occupy any imaginable surface from paintings and sculptures to plush toys, stickers, and countless other consumer products.

For this exhibition, Murakami has produced a new group of paintings that revisit this creative partnership and will debut at the MCA. Murakami considers these extra-art-world collaborations “disruptions” to the expectations of a highly stratified system that prizes exclusivity and elitism, consistent with his superflattening of DOB characters into key chains, or jellyfish eyes onto luxury bags.

In Murakami’s rarely seen early works, he synthesizes traditional Japanese methods, materials, and formats. Trained in the Nihonga style of painting, which utilized mineral pigments for powerfully pure colors and emphasized careful craftsmanship, Murakami created works in the 1980s that began with animal imagery and an almost spiritual earthiness and evolved into pure abstraction. At the same time, the artist began to introduce more explicitly contemporary content into the works, using centuries-old materials to reference the dangers of nuclear power, comment on global consumerism, and lampoon both the excess and the self-seriousness of contemporary art.

The merging of Eastern and Western artistic traditions moved into new territory in the late 1990s, especially around Murakami’s development of his theory of the “Superflat.” This ambitious concept was meant to explain the cultural attributes of Post-World War II Japan, especially the popular image of Japan as a producer of saccharine consumer products such as Hello Kitty. Within a Superflat world, the Otaku, or maladjusted comic book geek, became the true driver of contemporary culture. Murakami’s paintings and sculptures of these years were shaped by these theories.

Mushrooms are popular in Japanese art history, but Murakami’s surreal and hallucinogenic rendering in a seven-panel painting was his largest work at the time it was made. Likewise, his smiling technicolor daisies have become one of his most popular and recognizable forms. His daisies are featured in exquisitely painted canvases, as well as stickers, plush pillows, and skateboards, among other products.

Murakami’s relationship to pop culture reached a high point around 2007, when he began to collaborate with rapper Kanye West on album covers and videos. The iconic character at the center of the visual identity was dubbed the “Kanye Bear,” meant to stand in for an adolescent West. Murakami later made a sculpture of the bear in his signature cartoonish style, replete with a gilded “Jesus piece” necklace popularized in the hip-hop community. Murakami recently revisited his creative partnership with West for a new painting, presented here for the first time.

After finding himself at the center of luxury and celebrity cultures, he began to depart from the highly commercial, cartoon-inspired aesthetic that garnered him popular acclaim. He returned to classic Japanese paintings from centuries past and researched the imagery of Buddhist monks and figures. He drew upon this more serious source material for solace and inspiration when addressing the massive earthquake and tsunami that killed over 15,000 people in 2011 and affected him greatly.

He turned to historical paintings to find an appropriate response, attracted to a legendary band of Buddhist monks called Arhats who roamed the land in an attempt to heal and comfort people. This discovery fueled a growing body of paintings featuring wizened and highly individualized groups of Arhats, and other elements of Japanese and Buddhist cultural heritage.

Murakami founded the Hiropon factory (now called Kaikai Kiki) in Saitama in 1996, first as his studio and then as an art production and art management corporation to market his art and foster emerging artists. Since then, he has become known for several high profile commercial ventures, forays into comics and animation, and his own colorful, post-apocalyptic characters, all the while diligently incorporating the traditions of Nihonga painting.

Murakami's work is in private collections and foundations as well as major public collections including the MCA's collection. Murakami was born in Tokyo, and studied at Tokyo University of the Arts, Japan, earning a BFA in 1986, an MFA in 1988, and a PhD in 1993. MCA Chief Curator Michael Darling has known and worked with Murakami for twenty years, and curated the American presentation of the artist’s Superflat exhibition at the Museum of Contemporary Art, Los Angeles, in 2001.