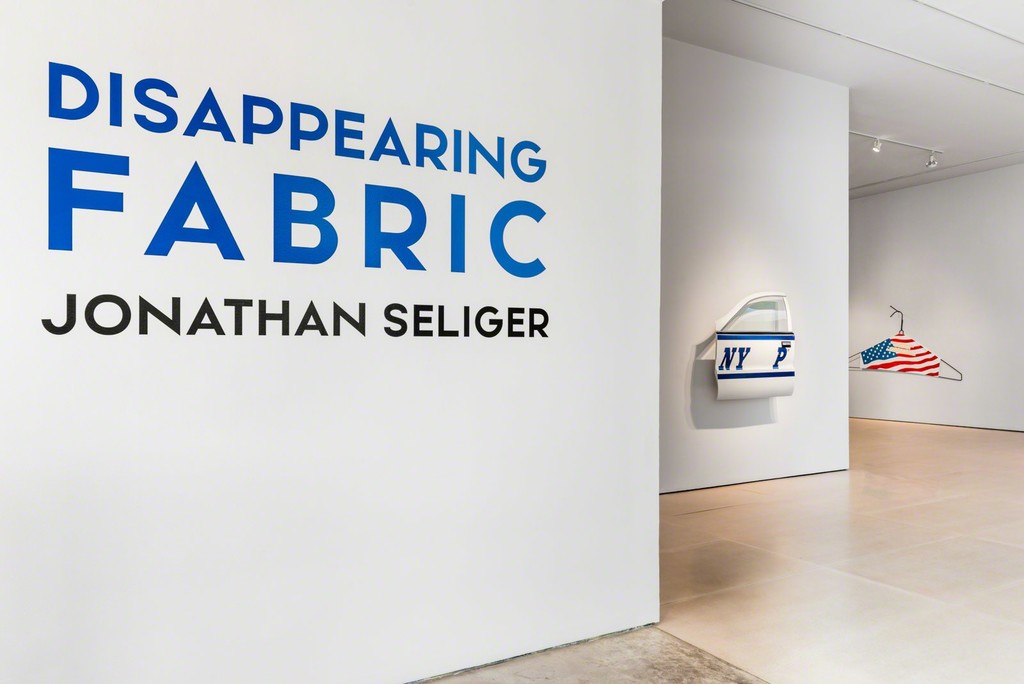 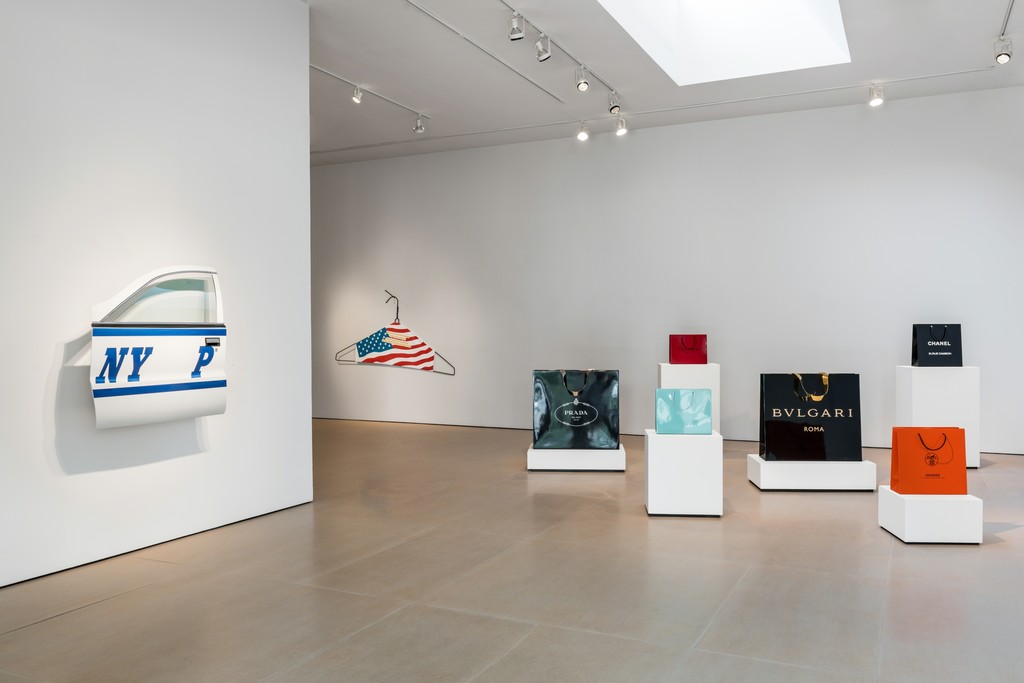 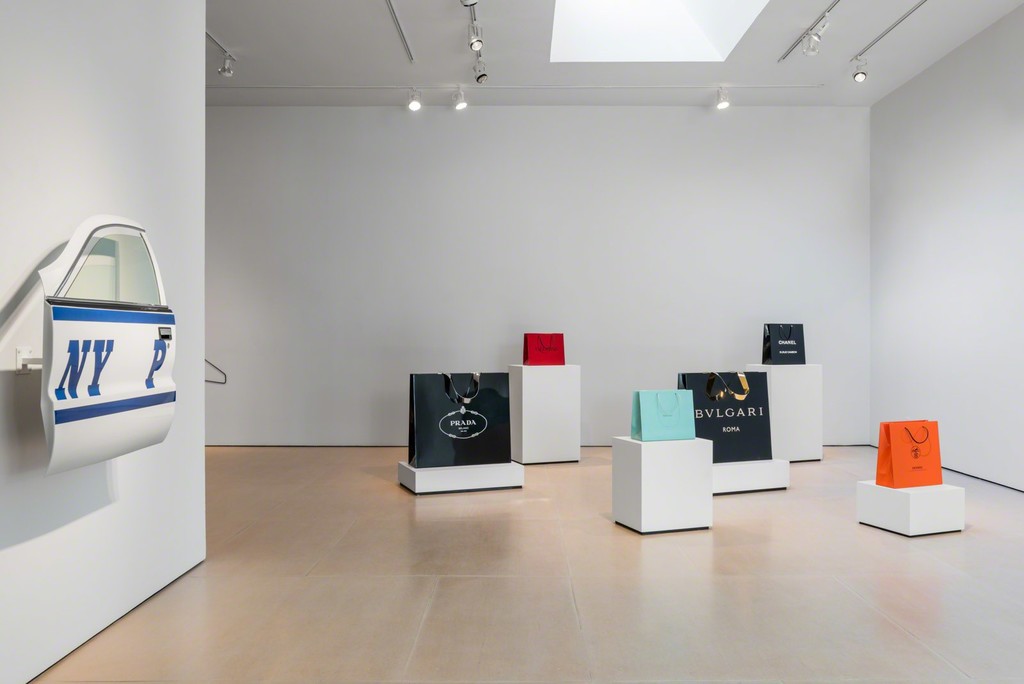 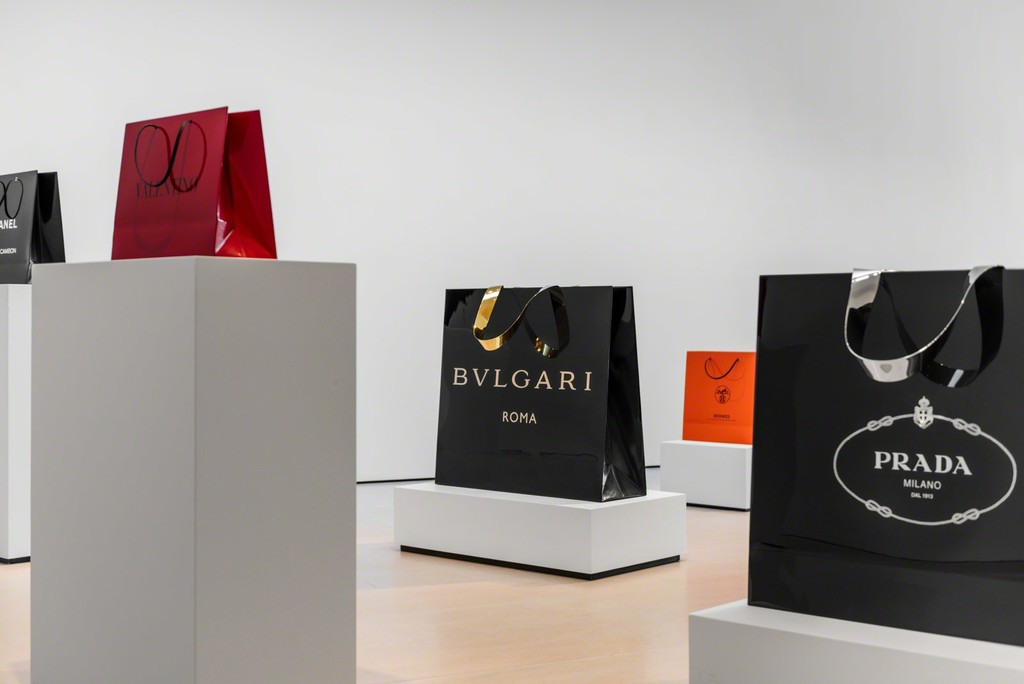 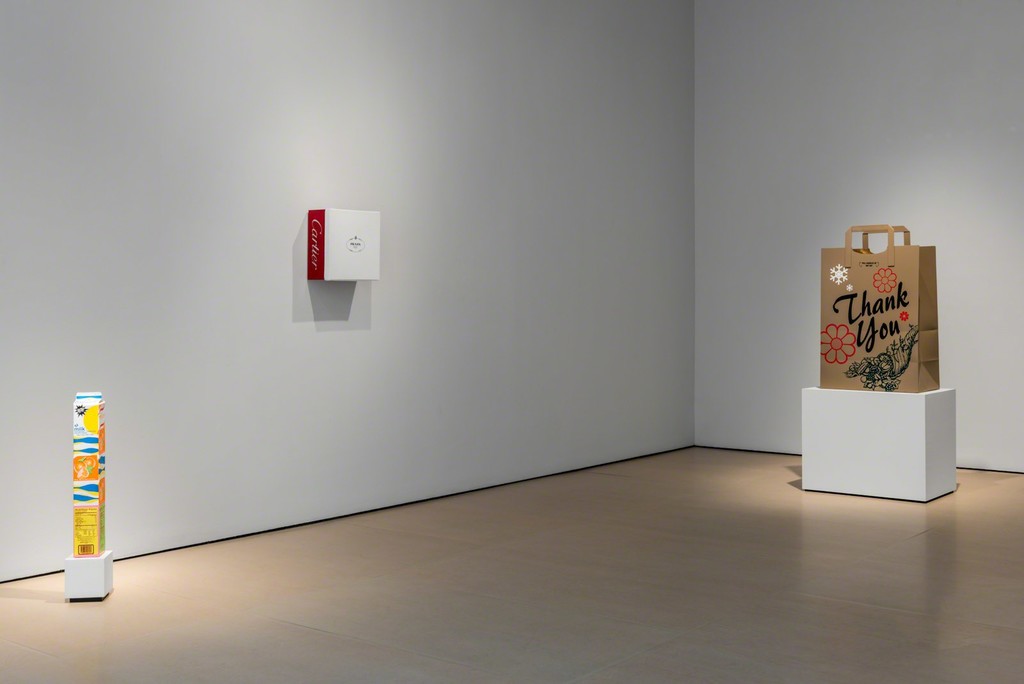 Seliger’s reverence for everyday objects places him squarely in the Pop Art tradition, with an intricate fabrication technique that calls to mind the West Coast’s finish fetish movement as well as a postmodern concern with simulacra. Through subtle shifts in scale, color, surface and even language, Seliger’s constructions are imbued with poetry, humor and social critique. For his signature luxury bags, he flawlessly reproduces the symbols of ultra-luxury and consumerism—retail bags from Prada, Chanel, Bulgari—in a blue-collar sheen of automotive enamel on bronze.

Caprice sees the disembodied door of an NYPD vehicle installed on the wall, Seliger elaborates:

The sculpture is deliberately about 15% smaller than the original door. In a way shrinking the scale even slightly made it anti-heroic; the piece was intended to touch on strife in society, the necessity for order and the impending threat of chaos, civil unrest, the dissolution and mistrust of authority, shifting polarities, and the constancy of law…. It is a cultural fragment, a relic of a bygone era perhaps… In 2008 the recession threatened the collapse of the American auto industry and how the auto industry was synonymous with American ingenuity and our mechanical, financial and cultural predominance, with what we called the American Century.

The titular Disappearing Fabric was made in 2006 around the wake of Hurricane Katrina and is equally relevant today. At more than seven feet wide, the oversized dry-cleaning hanger is draped in a fluttering American flag. The inspiration behind the piece was multi-fold: the actual damage and disintegration of garments over time, a dialogue with Jasper John’s works from the late 50-60s.

Jonathan Seliger (b. 1955) earned his BA from the State University of New York at Binghamton. He has exhibited at the The Schaufler Foundation, Schauwerk Sindelfingen, Germany; as part of the Panza Collection in Perugia, Palazzo della Penna and Galeria Nazionale dell’Umbria, Perugia, Italy; Yerba Buena Center for the Arts, San Francisco, CA; the Aldrich Museum, Ridgefield, CT; Phoenix Museum of Art, Phoenix, AZ; Museum of Contemporary Art, San Diego, CA; Blanton Museum of Art, Austin, TX, and in many other museum and galleries throughout the United States, Europe and Asia. His work can also be found in the permanent collections of the Museum of Modern Art, New York, NY; Whitney Museum of American Art, New York, NY; Weatherspoon Art Museum, Greensboro, NC; The Jewish Museum, New York, NY; The Panza Collection, Lugano, Switzerland; Magasin 3, Stockholm, Sweden; Brooklyn Museum of Art, Brooklyn, NY; and Walker Art Center, Minneapolis, MN, among others.