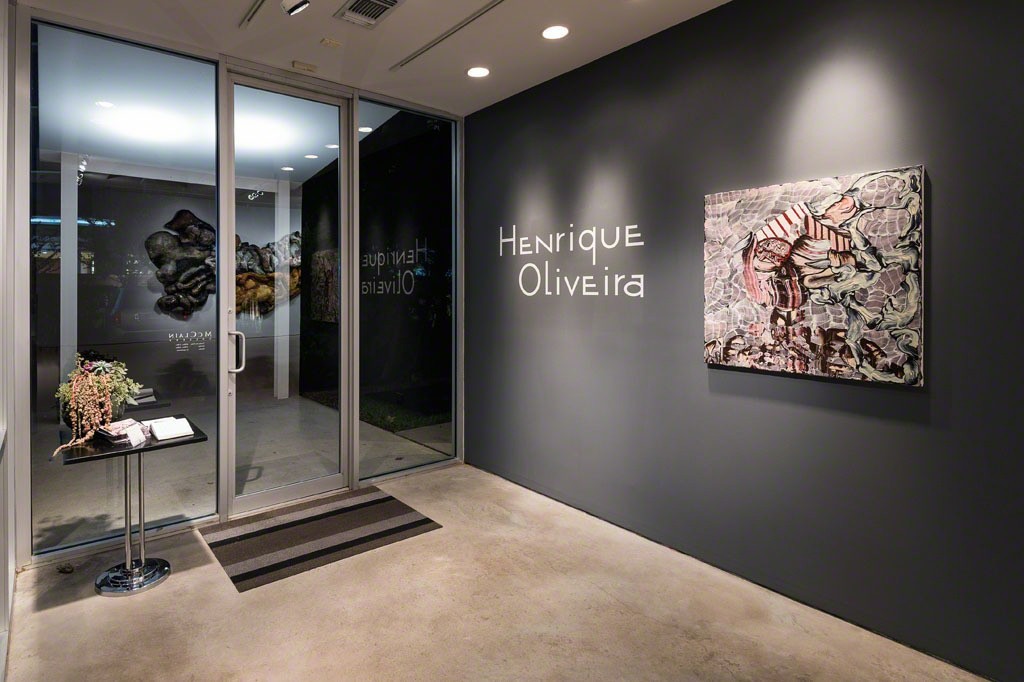 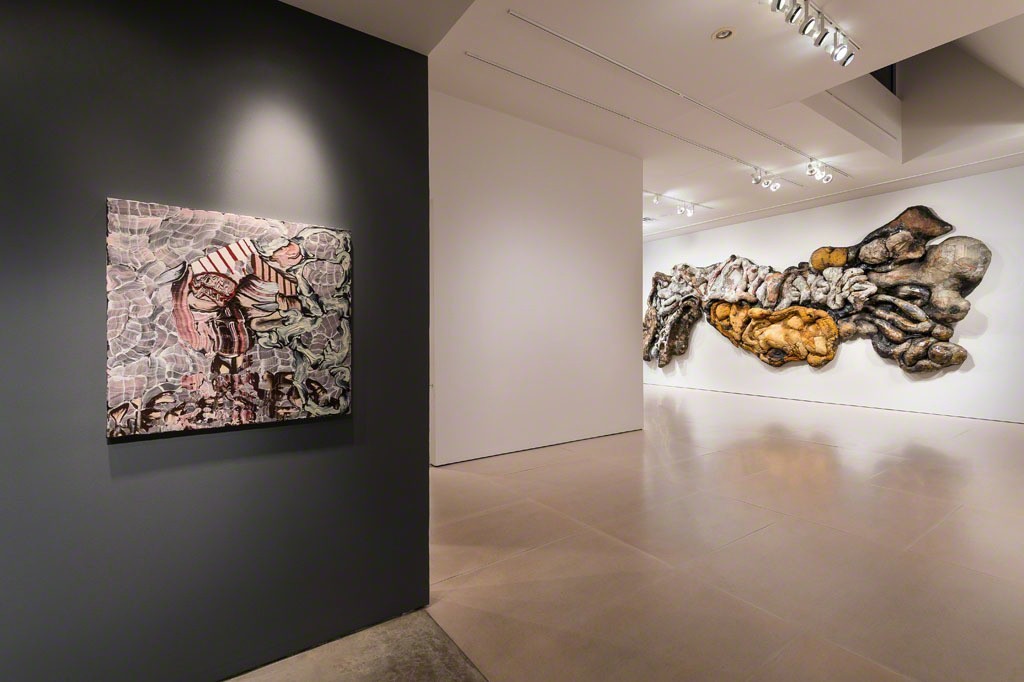 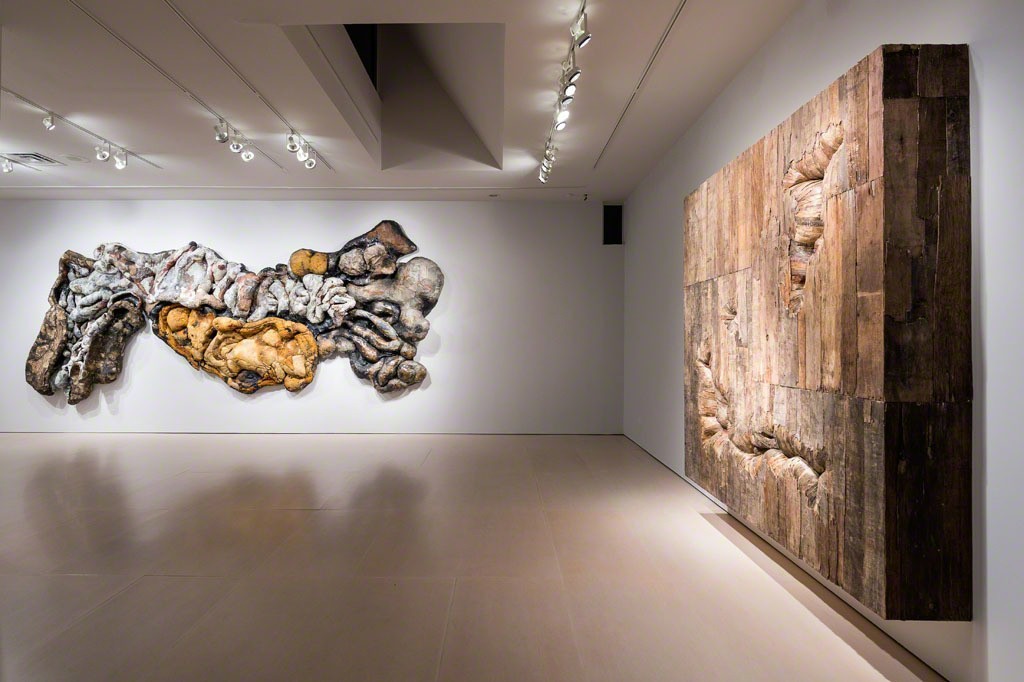 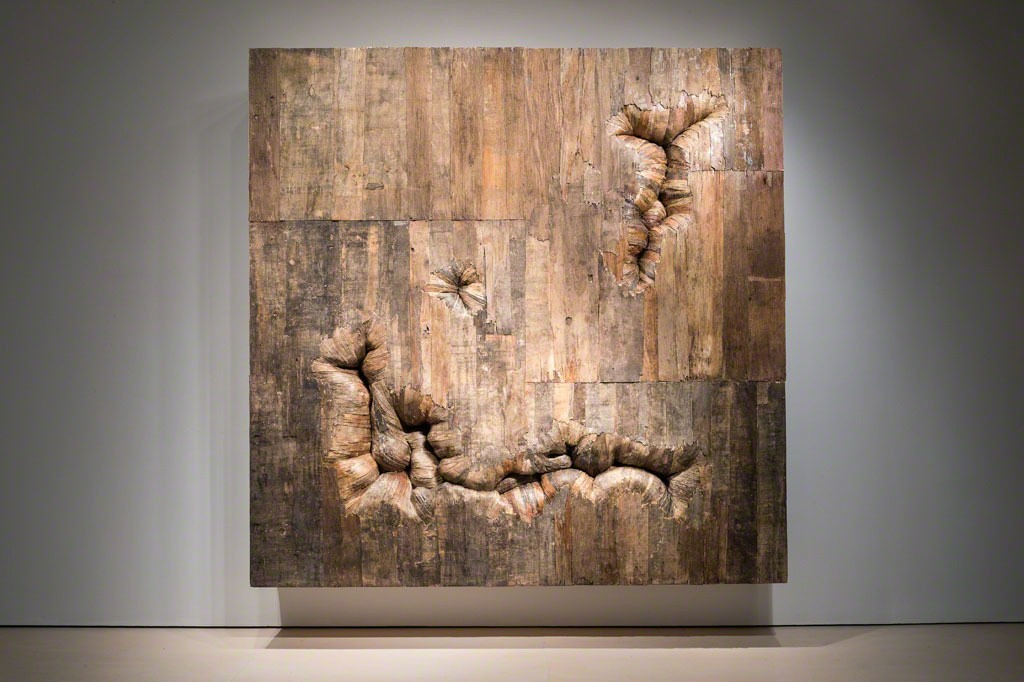 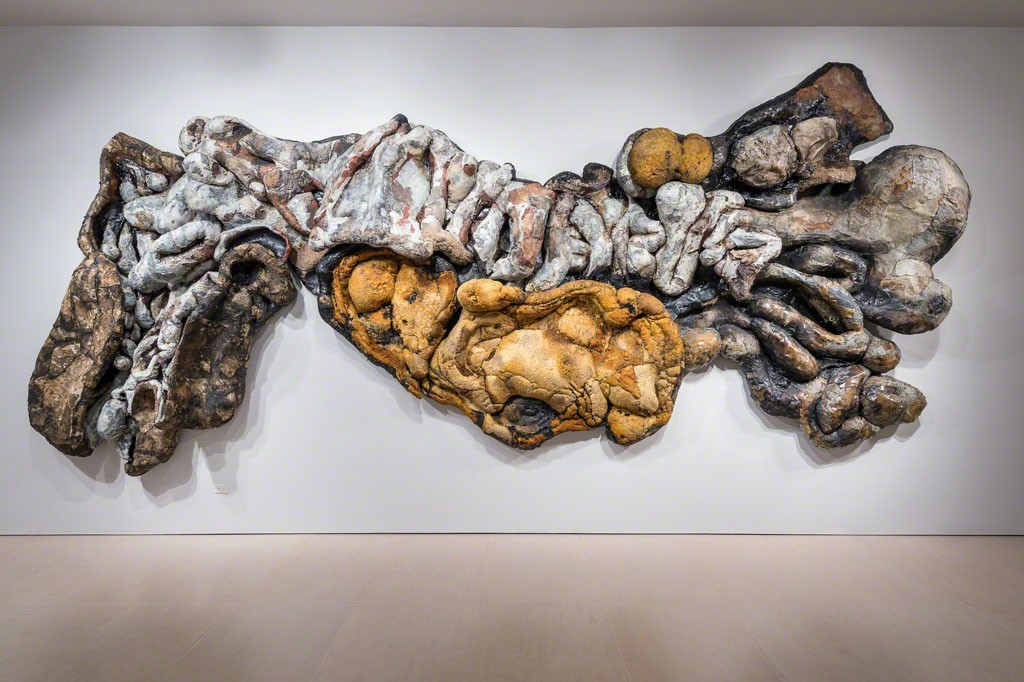 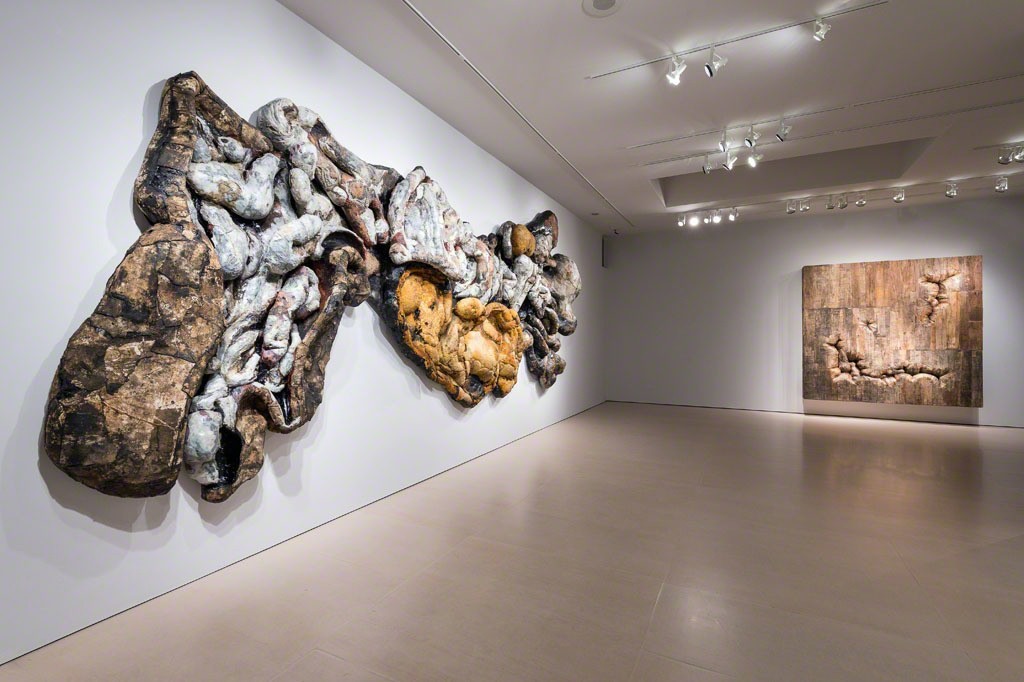 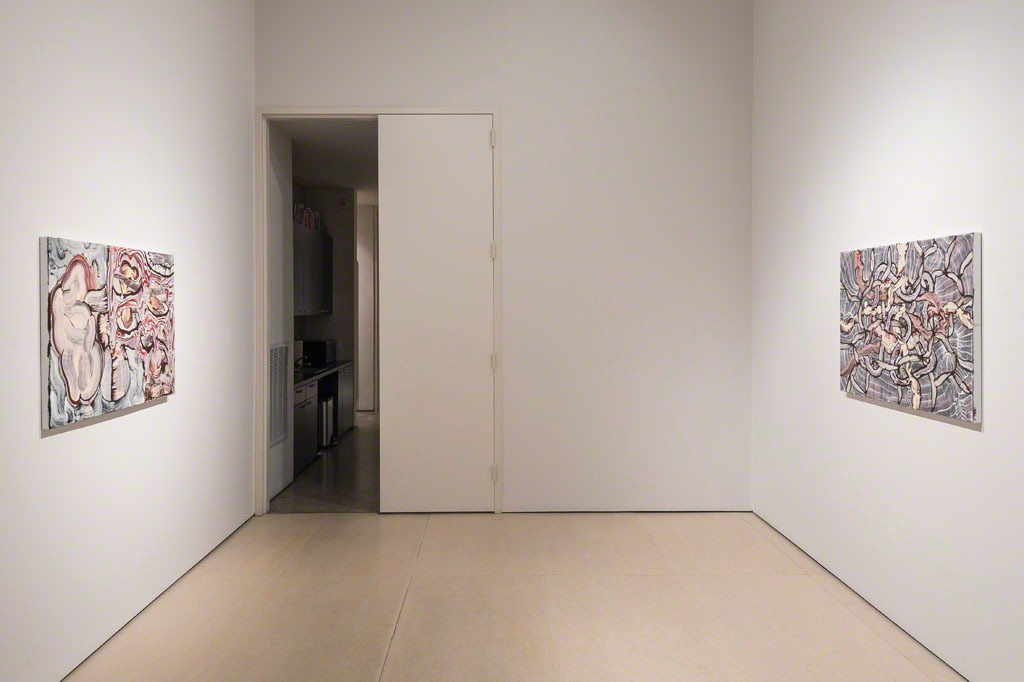 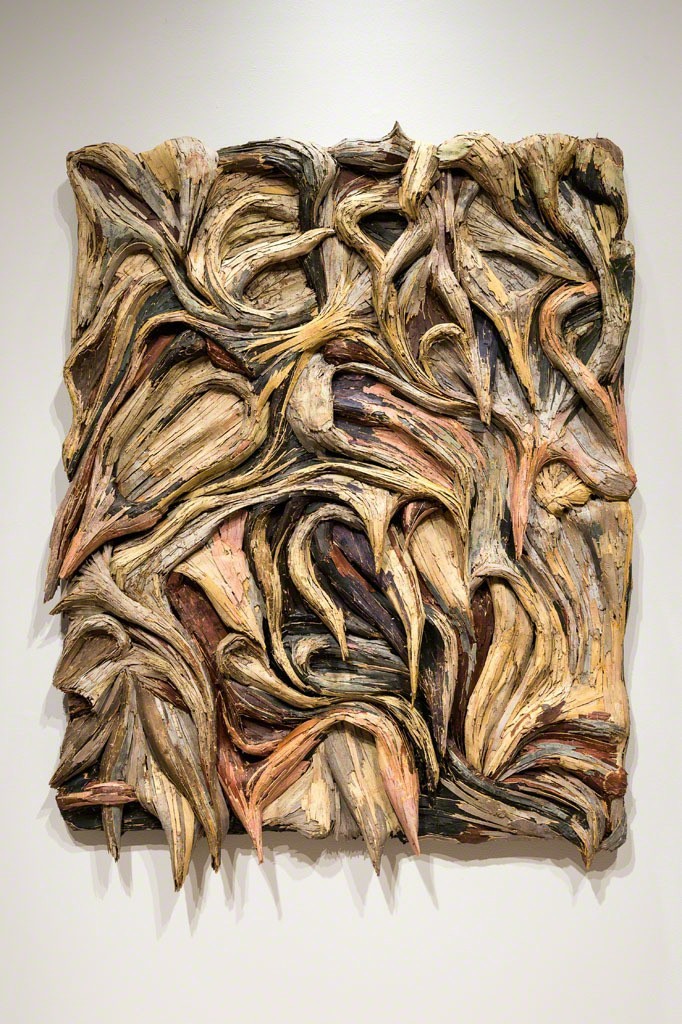 McClain Gallery is pleased to present a solo exhibition by Henrique Oliveira. This is the São Paolo-based artist's first exhibition at the gallery and will focus on his most recent body of work, including a collection of his sculptural pieces, a large-scale installation and paintings. Oliveria will be in attendance for the opening on Tuesday, November 17 from 6-8 pm and will give an artist talk on Saturday at 2pm.

Oliveira is probably best known for his immersive and site-specific large-scale installations, such as his architectural Baitogogo at the Palais de Tokyo in Paris, and his 2009 Tapumes at Rice University Art Gallery. Most recently, the Houston Airport System commissioned Oliveira to paint Travessia, which is on permanent display in the newly opened Southwest Airlines International Terminal at Houston Hobby's Airport. Henrique began his artistic career as an abstract painter and all his work grows from this classical training. His paintings are seemingly chaotic expressions of color and gestural brushstrokes that reflect his ongoing interest in the lineage of abstraction. The paintings in this exhibition are rendered from a palette of ash-hued acrylics and evoke a darker, more subdued world-perspective. Likewise, they showcase a deep-seated interest in visceral and organic materials also found in his sculptures. This particular body of work was inspired by urban poverty, human habitation, or what he calls “city disease.”

If the paintings are two-dimensional expressions of outward chaos, then his wall-dependent sculptures are those same images made flesh. One such sculpture is Xilempasto 7, made of plywood, pigments, cardboard and glue; the piece is a perfect example of how the artist uses three-dimensional elements to mimic the technique of impasto painting. According to Oliveira, the "Xilempasto" series is the kind of work, "that happens in the fissure between the genres of sculpture and painting." Likewise the 24-foot wide, Adenocalcinoma Poliresidual, is a corpulent protuberance that seems to overtake the space it inhabits, bleeding from the wall as though it hides a rotting lesion underneath. He created the structure from reclaimed plastic, asphalt, fiberglass and foam. Oliveira states, "Mostly from synthetic origin, these components aim to establish a correspondence between one of the most common disorders in the human body and the environmental aggression made by humankind." In this way, Oliveira sees the human body as a kind of portentous metaphor, which parallels the same interior disruptions of cancer or disease to the turmoil we humans inflict upon our own environments.

Henrique was born in Ourinhos, Brazil in 1973. He received a BFA in painting in 2004 and a Masters in Visual Poetics from the University of São Paulo, Brazil. Oliveira has built and shown his own form of "Land Art" all over the world and most recently at the University of Pennsylvania in Philadelphia. Henrique's work has been featured in a number of biennales in cities such as São Paulo, Brazil; New Orleans, Louisiana and The Democratic Republic of Congo. His work can be found in the permanent collections of numerous institutions and museums including Virginia Museum of Fine Arts in Virginia; the Museu Afro-Brasil and The Queensland Art Gallery in Brisbane, Australia. He was also chosen as the 2009 recipient of the Smithsonian's prestigious Artist Research Fellowship and the 2010 recipient of the Fountainhead Residency at Fountainhead Studios in Miami, Florida. In 2011, Oliveira created a 29-foot long site-specific installation for his solo exhibition at the Boulder Museum of Contemporary Art in Boulder, Colorado. In 2013 his stunning Baitogogo exhibition at the Palais de Tokyo museum in Paris was met with critical acclaim.