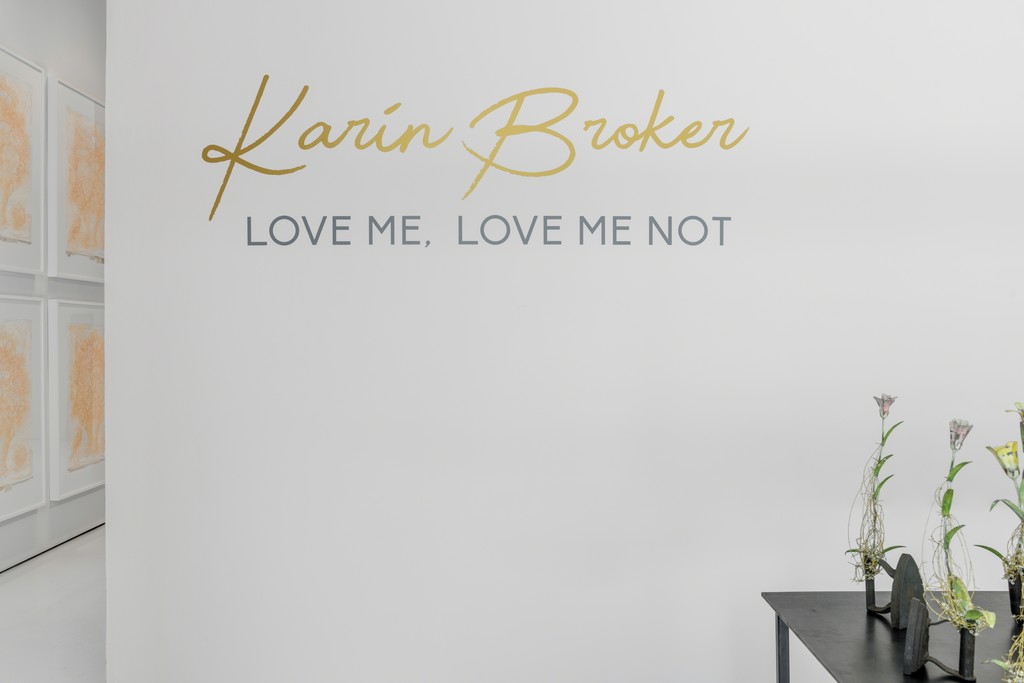 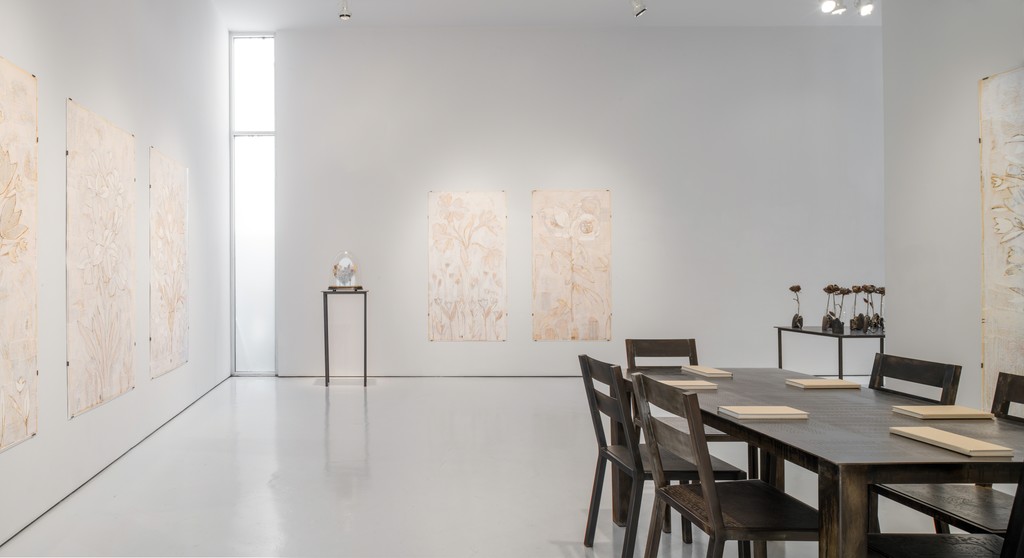 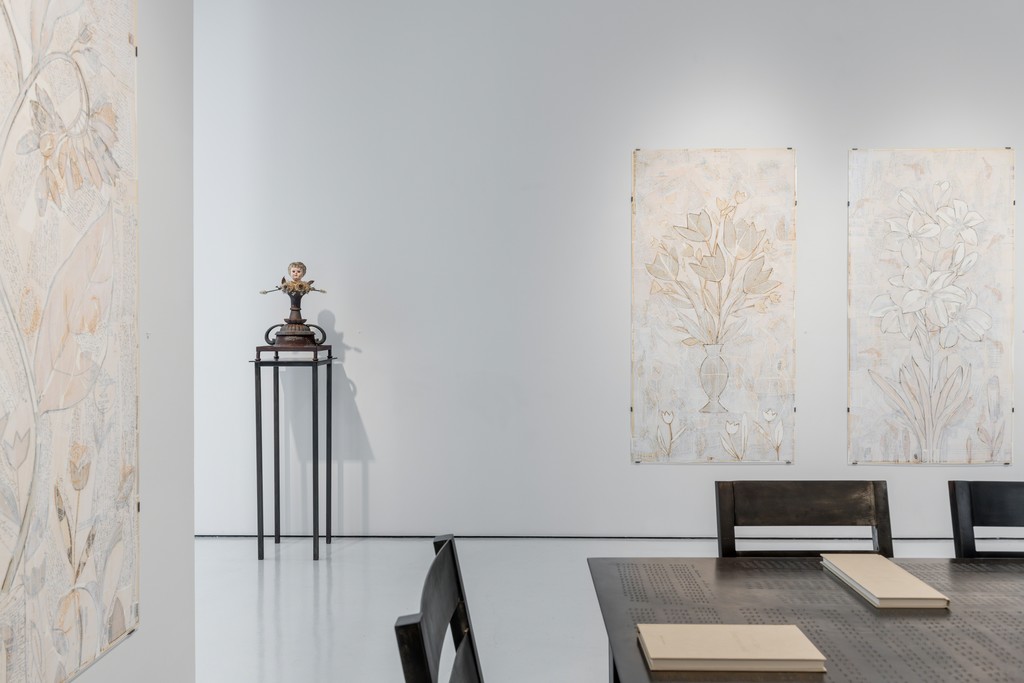 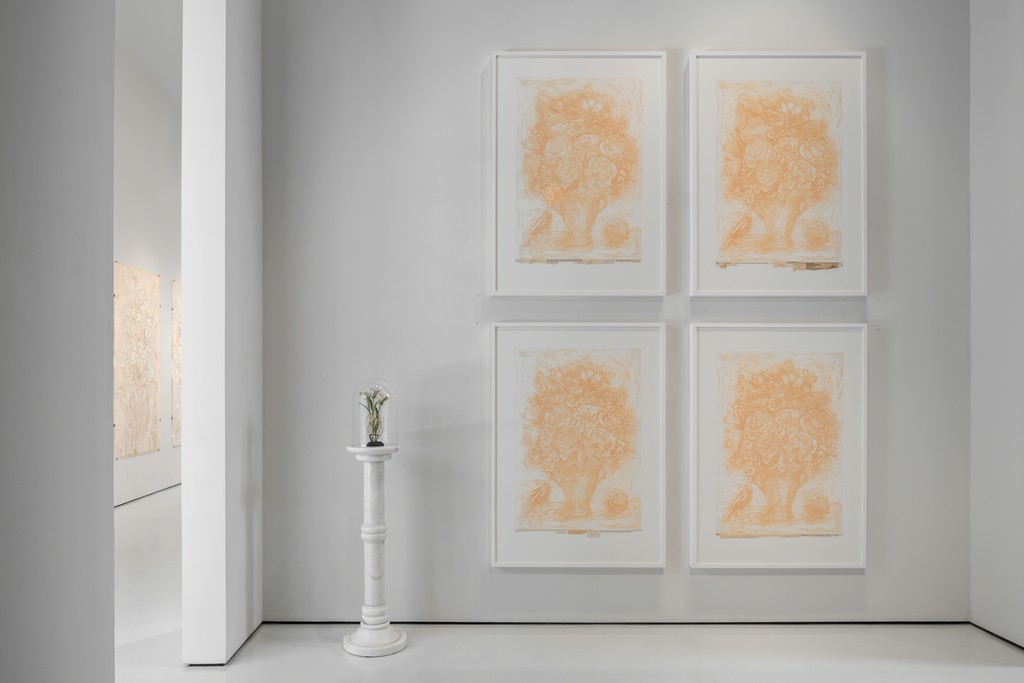 Broker’s layering of imagery, found materials, historic references and text help to draw attention to the underlying narrative of her work which highlights the contrast between the inherent strength of women and events where their strength has been disregarded or undermined.

The eleven collages appropriate a series of letters exchanged between a married couple during WWII. Every letter of their correspondence began with Kay Darling and ended with I love you, Johnny. As these collages developed, Broker began to question the mythic notion of “happily ever after” that this couple seemed to share and the fine line between perceived expressions of love and dangerous obsessions. The sentiments in the letters appear genuine, but because the letters were sent during wartime there is a subtext of concealment in activity on Johnny’s part as he writes from an active battleground. In these collages, hard truths and stark texts contrast against soft petals and fine flesh colored paper. These works also layer Broker's skill in drawing, printmaking and collage as each piece includes beautifully drawn and printed bouquets collaged with Johnny and Kay's letters among other carefully selected paper fragments.

These works are accompanied by a limited-edition artist made book that compiles Karin’s thoughts and research handwritten on each collage about shockingly brutal acts committed against women and remarkable female figures who have been overlooked in printed history. Broker feels compelled to tell these stories and as they unfold the flowers seem to act as stand-ins for the women themselves holding each other up as they battle their own individual struggles. The nostalgic narrative created by the collages and the companion books result in an anthology of romantic remnants of a time gone by, a poignant reminder of brutality towards women, and ultimately an empowering force for viewers of all genders.

A number of the sculptures created for this exhibition include antique irons called SAD irons. “Sad” is an old English word for “solid” and the term “sad iron” is often used to distinguish the largest and heaviest of flat irons. The name SAD iron seems apropos for an extremely hot to handle tool that was used by women and an object that symbolizes the laborious and unheralded work traditionally done by the female sex. Broker weaves wire and crystals around the irons which act as connective tissue for the sculpture. The ends of the metal wires left sharply pointed reference the sometimes prickly and painful history of women. Taken together, Broker’s intention for this body of work is to give the viewer a glimpse “of the power, strength and resilience of my gender.”

Born in Pennsylvania, Karin Broker received a BFA from the University of Iowa and an MFA from the University of Wisconsin in Madison. She studied printmaking under Stanley W. Hayter at the Atelier 17 in Paris. She is professor of printmaking and drawing at Rice University and has been teaching there since 1980. Broker was the 1994 Texas Artist of the Year and was awarded two grants from the National Endowment for the Arts. As a master printer, Karin has worked with a number of artists including Alice Neel, Pat Steir, Garo Antreasian and Ed Ruscha. Her artwork is in public collections nationwide including the Brooklyn Museum of Art, McNay Art Museum, Smithsonian Institution, New York Public Library, Museum of Fine Arts Houston, Museum of Fine Arts Boston, Blanton Museum of Art and many others.