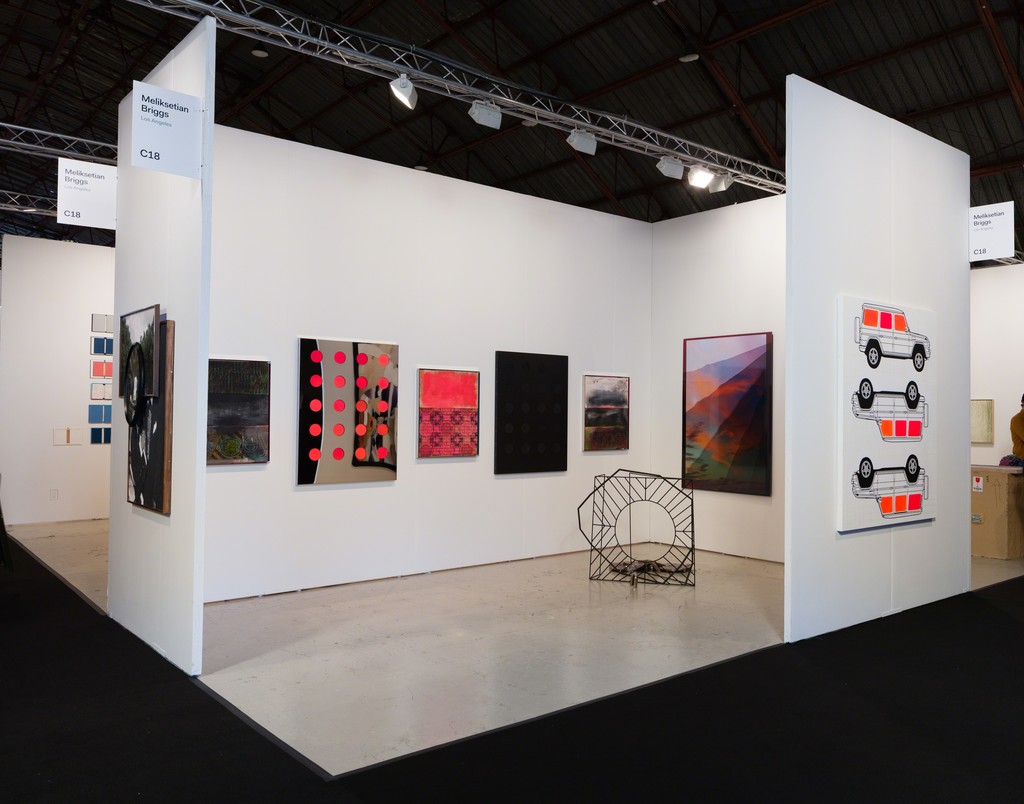 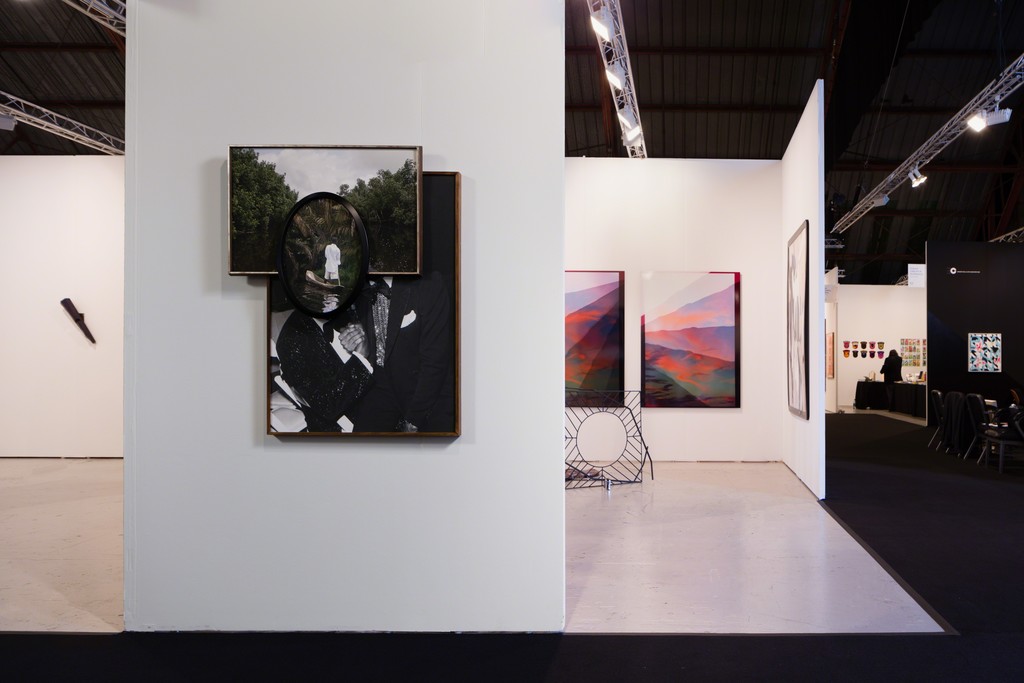 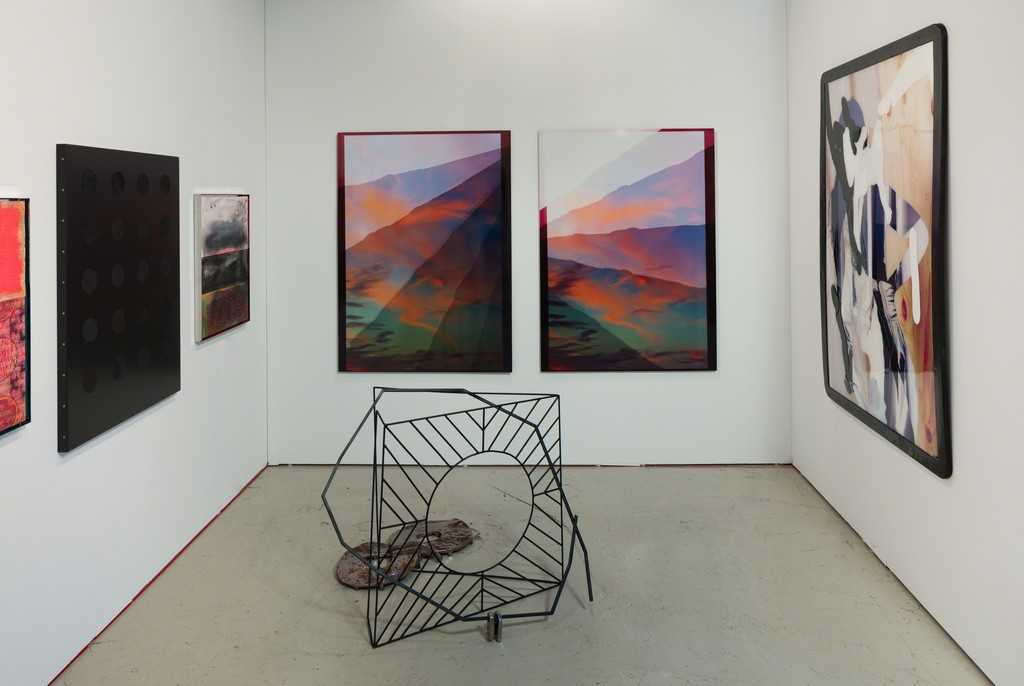 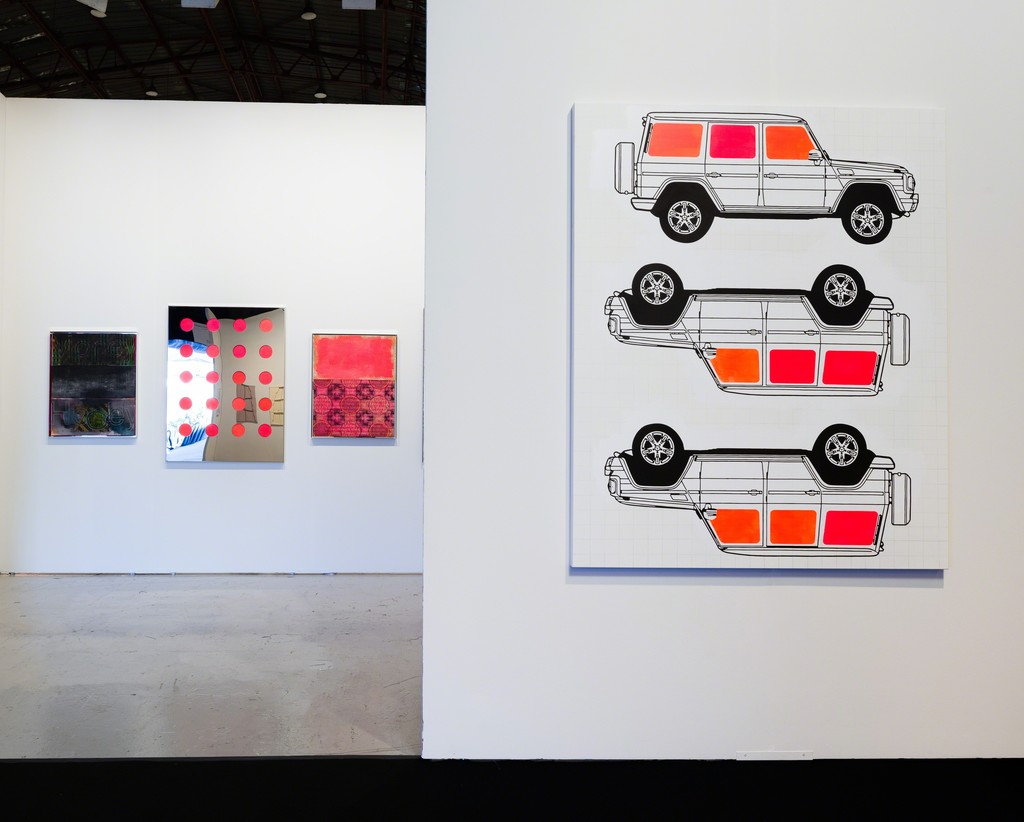 Cologne-based Johannes Wohnseifer (b.1967) works in painting, sculpture and installation. The gallery is presenting six works at ALAC, two sculptural wall works both entitled Search Engine, three paintings from the series Colony Collapse Disorder and a Class & Class Conflict painting (all 2017). His multi-referential works reflect the history of art and design, the legacy of Pop and Minimalism, corporate branding and the fetishization of desire, politics and history. His work has been exhibited extensively internationally and currently can be seen in Bunker #3 at the Boros Collection, Berlin.

The gallery will present two new paintings and a work on paper by L.A. – based Meg Cranston (b. 1960). Cranston’s latest works fuse, in her idiosyncratic way, her ongoing interest in color theory and it’s function within consumer culture vis-a-vis corporate marketing and branding strategies, and subsequent conditioning of personal and collective experience with the aesthetics and legacy of high Modernist abstraction. Cranston’s work can currently be seen in Post-Studio at the Museo Jumex in Mexico City and her work has recently been acquired by the Museum of Modern Art, New York, the Hammer Museum, Los Angeles and the Los Angeles County Museum of Art.

Angus Fairhurst (1966-2008) was a key member of a group of post-conceptual artists associated with Goldsmith’s College in London that became known as the Young British Artists (or YBAs) in the early 1990s. Working in a wide variety of media, among them painting, photo, performance, music, sculpture, collage, installation and animations, with conceptual rigor and wry humor, Fairhurst eschewed a signature style and his work resists easy categorization. The gallery will present one of Fairhurst’s Bus Shelter series, Adshel V, 2006 made of collaged and layered bus stop advertising posters, only with the text and figure removed, and poured resin - a hybrid of appropriational strategies, collage and painting and handmade, pre-digital image making. Fairhurst’s work is in such collections as the Tate, London, the Museum of Modern Art, New York and the Walker Art Center, Minneapolis.

Todd Gray’s work in general explores notions of identity, the black body, post colonialism, celebrity culture and hybridity. Two works from his ongoing series Exquisite Terribleness will be presented at the fair. This body of work features images from Gray’s own archive made during his time as Michael Jackson’s personal photographer in the 1980s, juxtaposed with images he made in Ghana where he owns a studio. In 2018, a performance by Gray (b. 1954) will be featured in the exhibition Public Fiction’s The Conciencious Objector at the MAK Center for Art and Architecture, West Hollywood opening in February and his work will be featured in the major summer exhibition Michael Jackson: On the Wall at the National Portrait Gallery, London.

Mustafa Hulusi (b.1971) mines his hybrid identity—he was born in London to Turkish Cypriot parents—to create his evocative paintings, installations, films, and photographs. By combining diverse artistic styles and references to pop culture, advertising, and Middle Eastern and Western history in his works, Hulusi investigates how different visual languages shape our perception. The two large-scale photo works at ALAC have as their subject Cyprus’ rustic and scenic Mediterranean landscape. However, Hulusi complicates the easily consumable, romanticized imagery with political reality through an artistic intervention, disrupting the uncritical digestion of the images and the logic of their aestheticization. Hulusi’s work is in international collections world-wide including the Tate, London, British Council
Collection and the Pinault Collection, Paris. In 2007, Hulusi represented Cyprus at the 52nd Venice Biennale.

Lisa Seebach (b.1981) whose new sculptural work is currently on view at the gallery, combines abstract elements in steel with familiar, seemingly everyday forms handmade in glazed ceramic. Critic Jonathan Goodman states “Seebach’s improvisatory… sculptures are linear and volumetric at once, without obvious historical precedent...the combination of line and volume leads toward what can be described as drawing in three dimensions, but at the same time, the space occupied by the forms is expansive, more or less installational.” In 2018 / 2019, Seebach will have three solo museum shows in Germany at the Kunstmuseum Moritzburg (Halle/Saale), the Kunsthalle Lingen, and the Kunstverein Braunschweig, respectively.