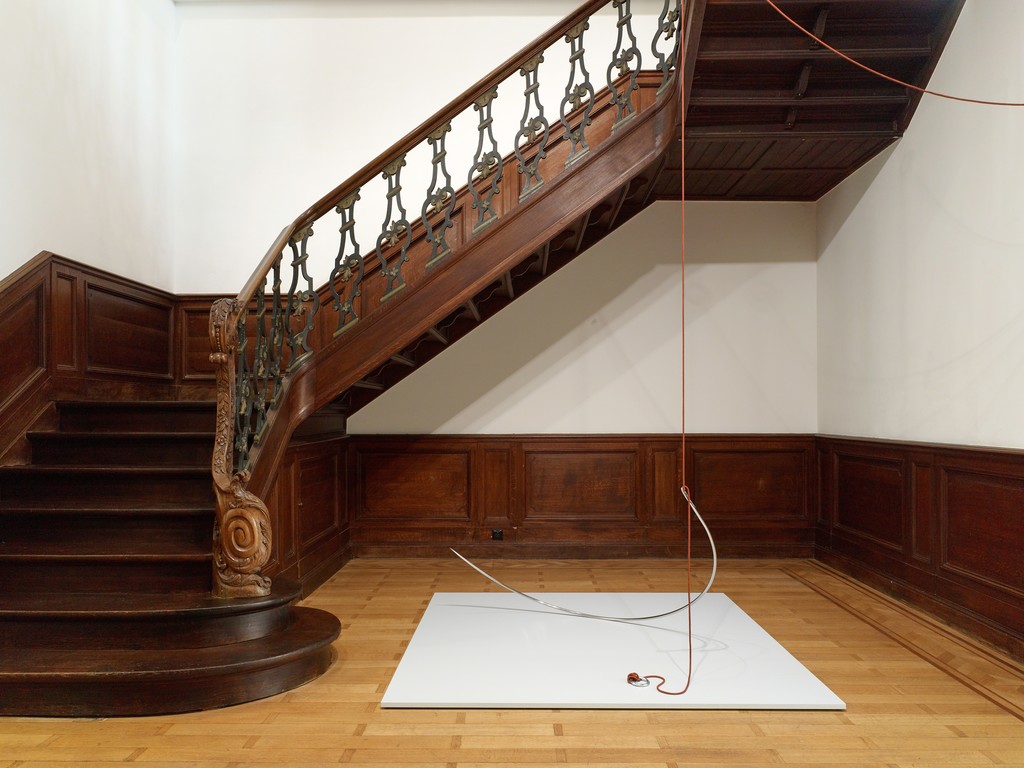 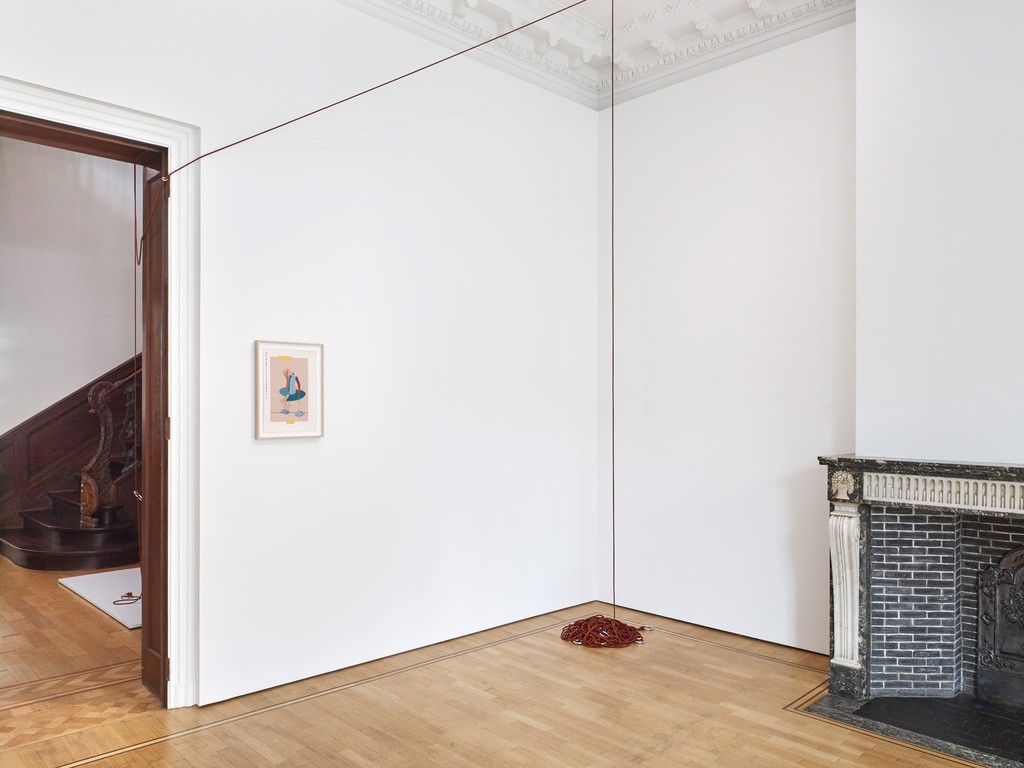 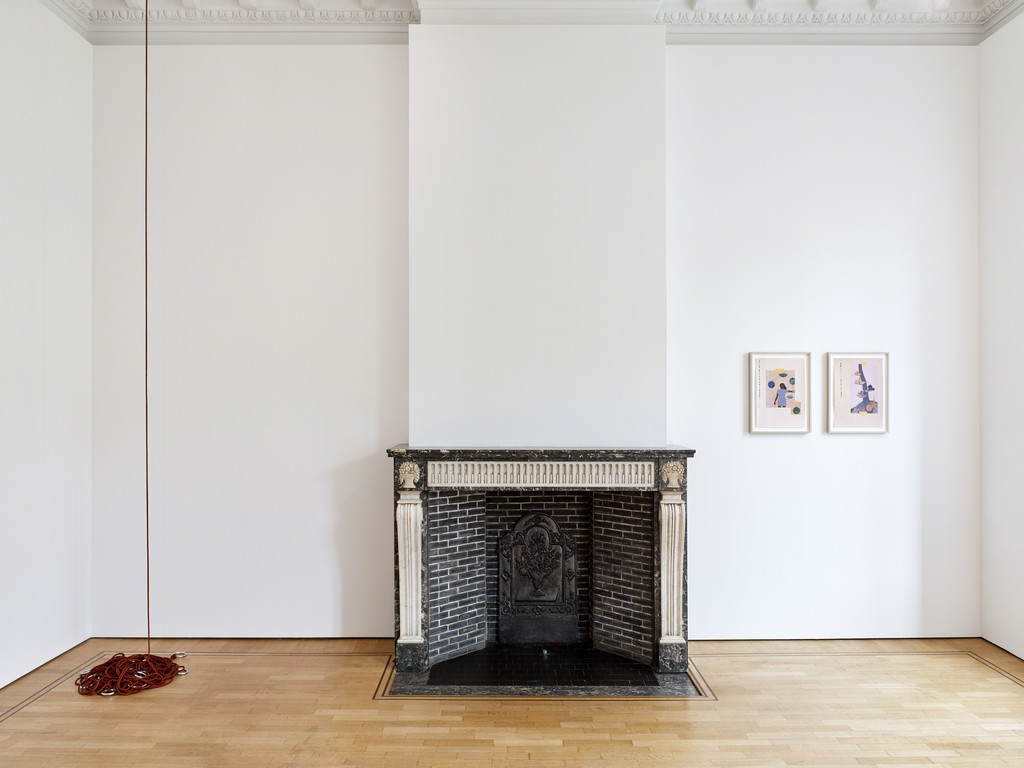 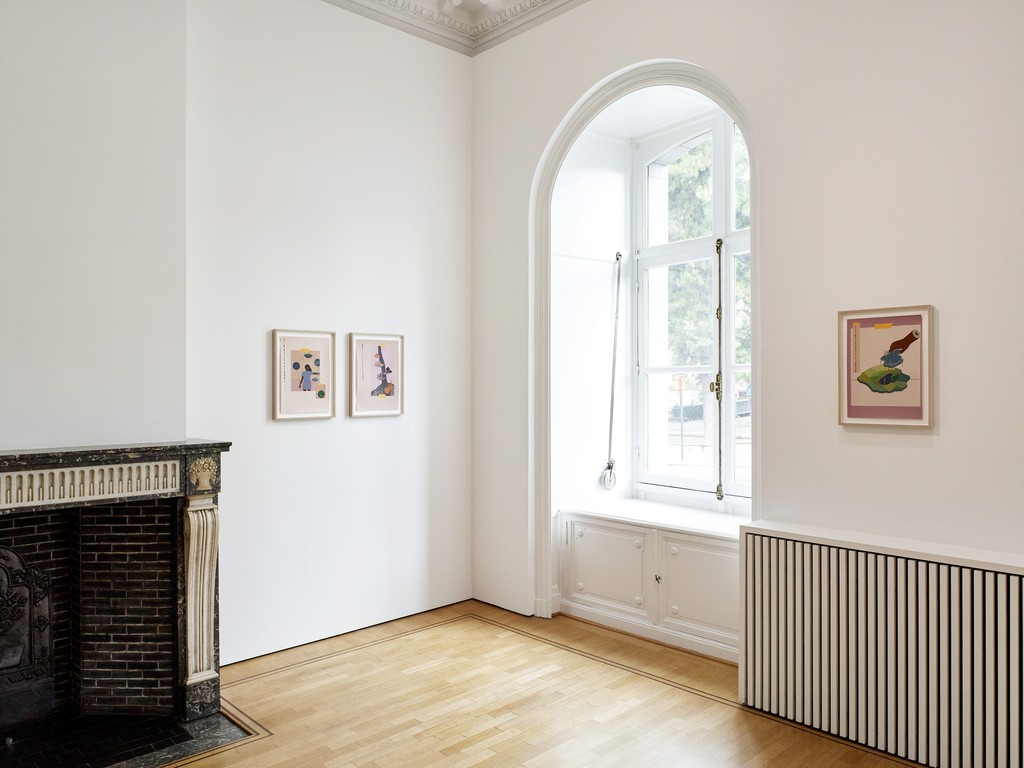 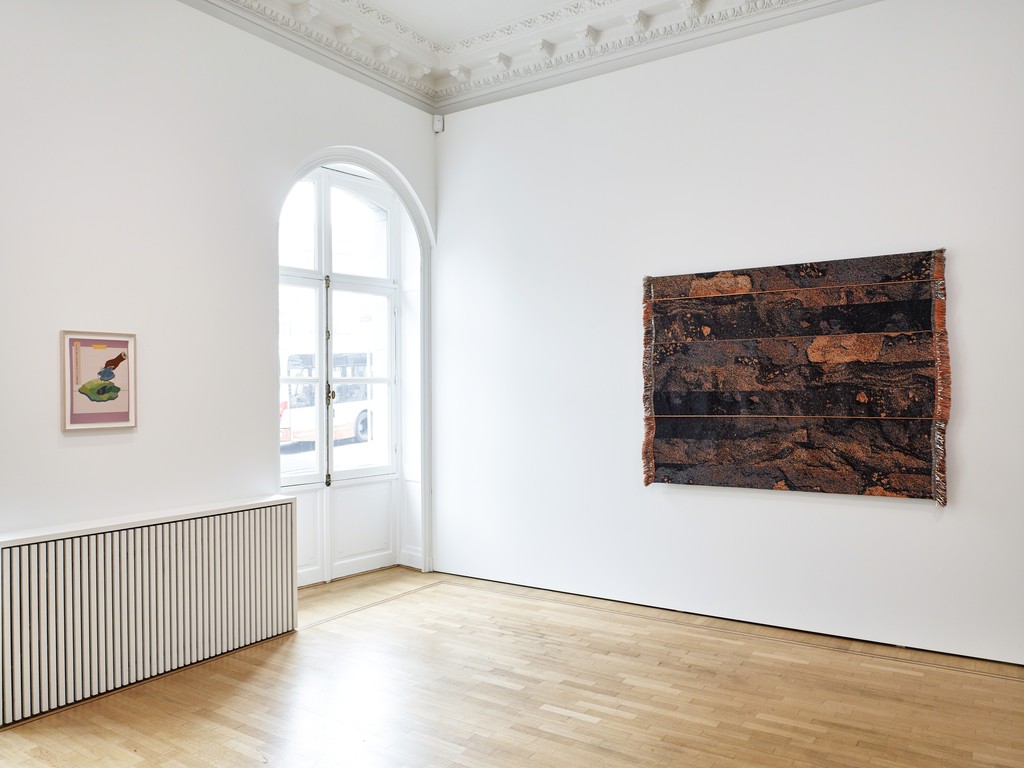 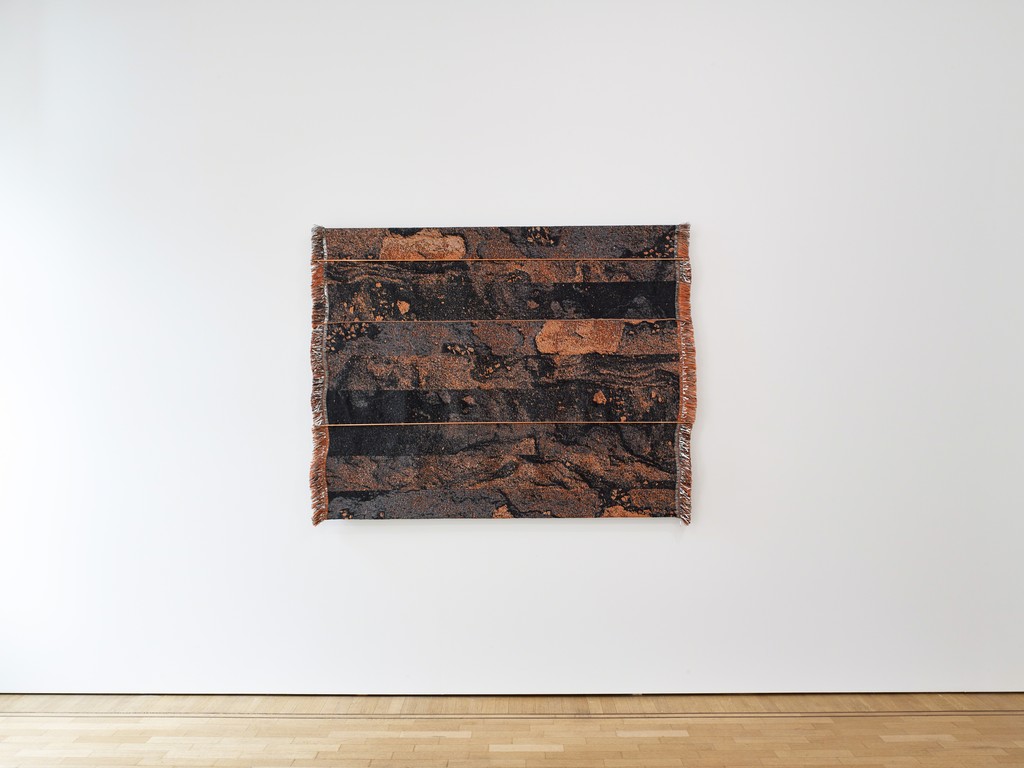 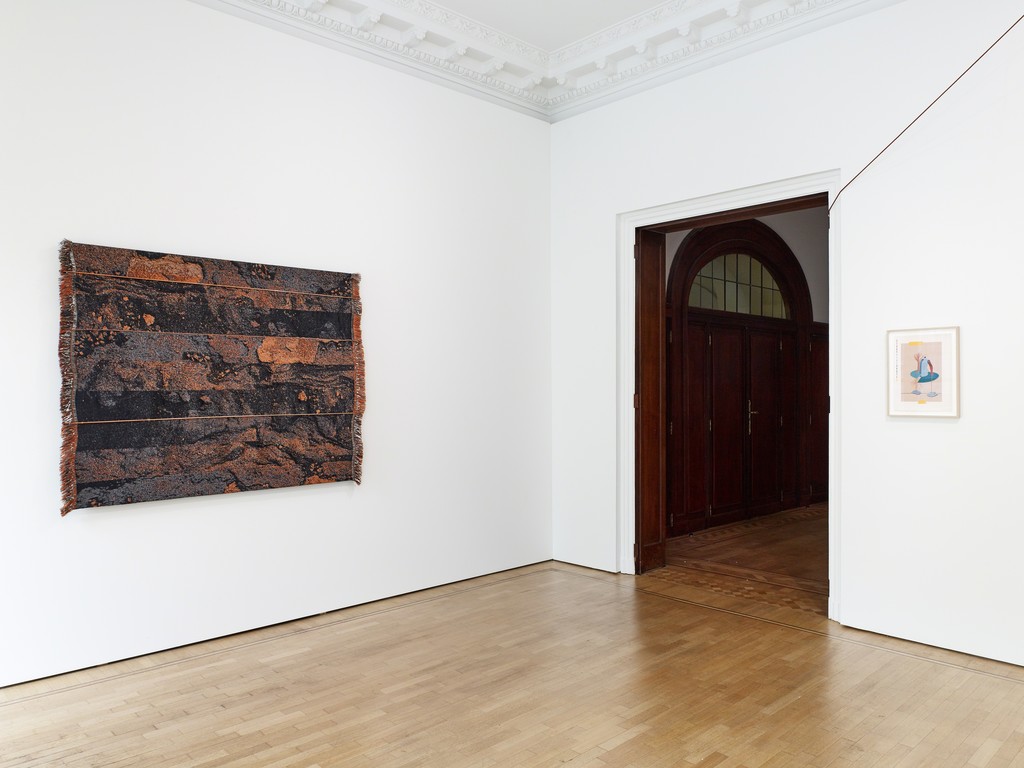 The late Carl Sagan put our existence into perspective when he uttered the famous line we are made of star-stuff. Reflecting on her place in the universe, Otobong Nkanga remarks that I was born into this planet, it was here before I arrived and hopefully it will still be here after I have left. I know my remains will be a little particle that will be part of this planet. I cannot disassociate myself from the environment I live in because I am part of it in every sense, from the air I breathe to the food I eat. [1] We are part of our planet’s seemingly infinite state of struggle and transition as atoms from past and present join, break apart, and reconfigure in the future far past our earthly existence. Part of the apparatus of power of various human civilizations has been to elevate mankind into something separate from nature, aiming to improve our material condition through degrading our material context. Interestingly, many belief systems maintain that evil spirits inhabit an underworld; is it any wonder then that violence, death, and pain ooze from the Earth’s core as part of exploitative extraction processes, and are therefore embedded in most of the materials we take for granted as part of our urban realities?

Nkanga’s practice is one of trying to draw parallels to paint the bigger picture of our interconnected existence through performance, sculpture, painting, drawing, photography and video. She explores the complex relationships between science, politics, emotion and memory that we use to find our bearing in this universe, on this planet, with our land, with each other, and within ourselves. Be it on an emotional, a political, or environmental level, we, and the entire planet are in a constant state of transition, a condition that inspires the title of Nkanga’s inaugural show at Mendes Wood DM in Brussels.

Nkanga creates generative discomfort zones in this exhibition. In a new series of drawings, a human body transitions from a whole form into progressively dematerialized seemingly post-human fragments, intertwined with similarly fractured splices of earth. Beyond the charged central images in these drawings, fleshy tones prime the paper and a stripe of a color reminiscent of a palette used to color-correct an image spans the left of the work. It appears that strips of tape adhere the central images to calibrating surfaces below them. This is a painted illusion grounding these surreal scenes into our plane of reality, creating a sense that they are part of a bigger picture that we are yet to see. This feeling that these drawings may not be final opens up room for time and the imagination to add new meaning to these powerful works of art.

Nkanga’s work incites us to leap beyond what we think we know and understand and rewire the circuits of our thinking. In the drawing Escape (2018), a serene female figure holds a series of suspended globes and severed pieces of land that revolve around her, strung together by a rope that she holds tightly in one hand. Her free arm reaches through a glove into a dimension that we cannot see, and another plane of the image presents an ecosphere that is lush and green with life; could there be another dimension that she accesses that is free of environmental destruction, even if only in her mind? In Reconciliation (2018), an incomplete mutant figure built up from fractured body parts straddles multiple planes, trying to find a sense of balance by using fragments of earth as counterweights. Reconciliation is a process of growing to feel comfortable with an undesirable or challenging situation. Nkanga was born and brought up in Nigeria and is still closely tied to her culture and land in West Africa while also living and working in Antwerp. Reconciliation is a very personal work of trying to find home and belonging in multiple places, across geographic, race, and gender divides; of trying to carry and grow roots in an increasingly fractured world; and of having the power to be a walking contradiction and to self-define identity and transition into new states of being.

Just as people and materials transition between various states, Nkanga’s works build upon each other and fragments of past works transform into new ones. Coup d'Etat (2003/2018), a suspended sculpture of a monumental needle grounded by hand-dyed thread, was born as part of a performance that no one but the artist and the photographer saw in 2003 at her final presentation at the Rijksakademie in the Netherlands. It later featured in other installation and video works such as Sustained Suture (2003) and Surgical Hit (2003). Nkanga created a set of needles, which could be seen as instruments of healing or of violence, through a process of heating and beating stainless steel, sculpting these forms during the height of the George W. Bush era which announced the invasion of Iraq. The term surgical hit was used to describe the precise destruction of targets, perverting the Hippocratic ideals behind the field of surgery. At the entrance of her exhibition, Nkanga looks at the duality of the needle and its ability to pierce, sever, join, and entangle, as well as its function as an instrument of transition. In contrast to the sterile gleaming steel, an organic two-toned rust-colored rope winds through the needle and threads across the exhibition space, also calling to mind the orange string running through her drawings and the surfaces of the tapestries in the artist’s Steel to Rust series.

Nkanga began working on the Steel to Rust series thirteen years after creating the needle form found in Coup d’Etat at the beginning of Donald Trump’s rise to political power. She reflected on the rusting state of the world’s political, industrial, and social order. Without constant care, all materials begin to oxidize. The stainless-steel needle of Coup d’Etat speaks to the simultaneously generative and destructive powers found in the utmost precision of human attentiveness. Contrary to the order-creating apparatus in Coup d’Etat, Steel to Rust inhabits the space of entropy – a phenomenon that can be clearly seen in the rusting state of big industry in the West as factories shift production and labor to developing countries and their menacing machines begin to break down. Steel to Rust - Calibration (2018) is a woven textile work chronicling the corroding state of the world, comprised of fragments of the artist’s prior experiments with tapestry-making measured against seemingly pure copper rods. Materials are charged with power structures and histories that we cannot see, and Nkanga helps us transition our minds to look beyond their shiny surfaces to experience deeper truths, perhaps even inciting us to polish up our act.