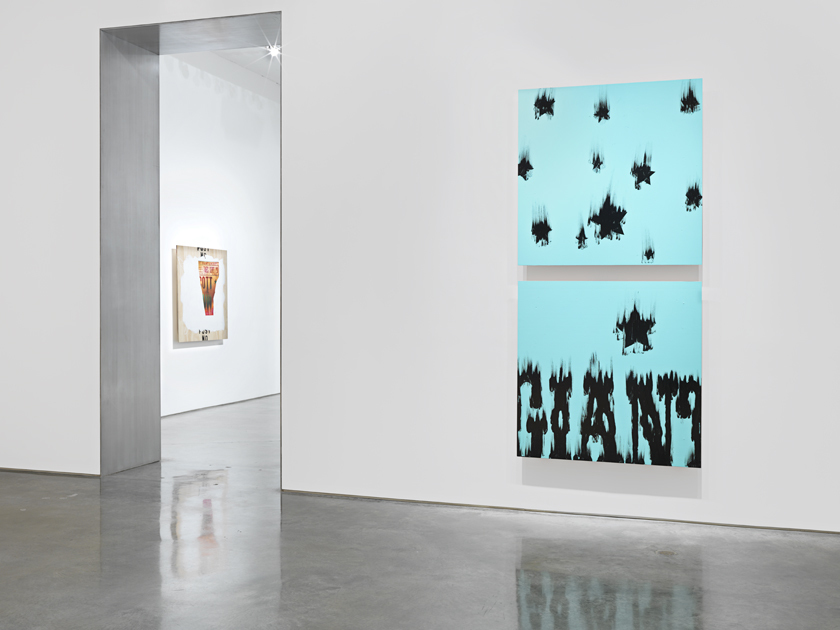 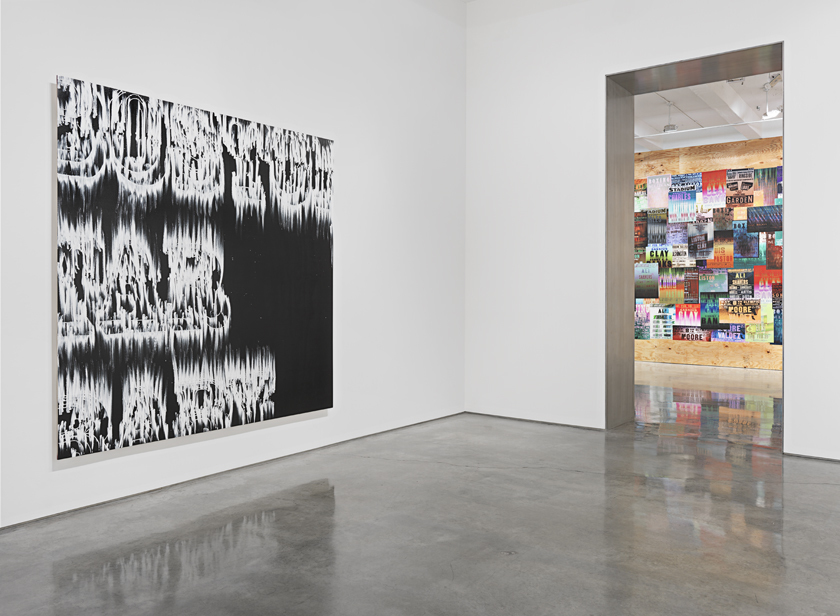 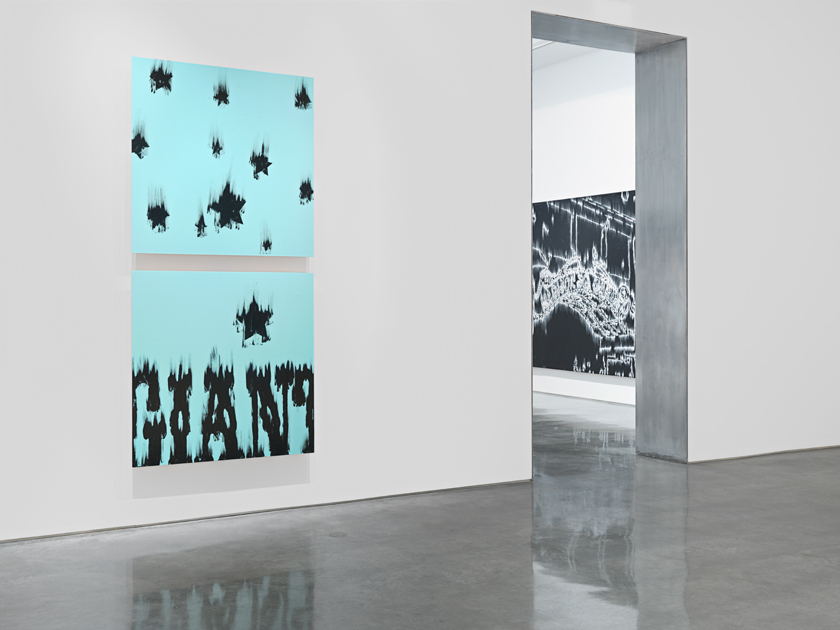 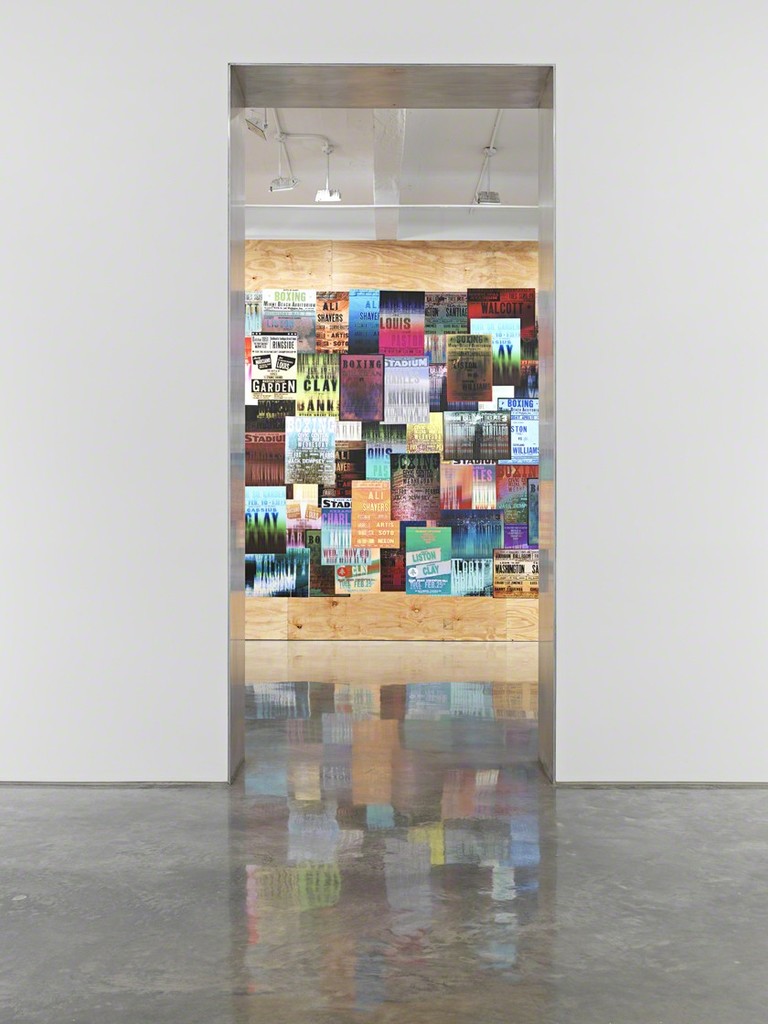 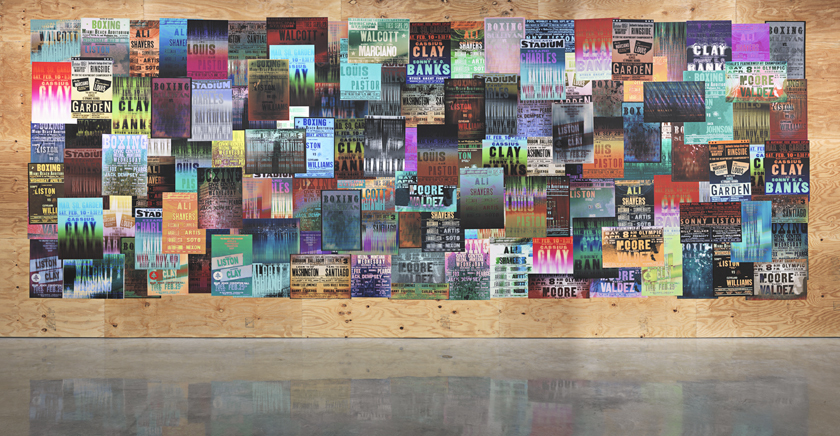 Gary Simmons presents paintings and drawings along with a 40-foot wall-installation. The immense installation on the gallery’s back wall comprises 160 posters for historic boxing matches that Simmons manipulates with saturated colors and his signature “erasure” technique, a process in which Simmons partially obscures elements of his drawings and paintings, leaving behind disintegrated traces of his subject. Mounted on plywood, the installation references ephemeral promotional posters pasted on the sides of buildings and pre-graffiti defacement. Also exhibited is a series of paintings with boxers’ nicknames. Invented by promoters and journalists, many of these names, such as “Boston Tar Baby,” were often overtly racist. Simmons is fascinated by these and less egregious names like Rubin “Hurricane” Carter for their ability to transform, if not dehumanize, boxers from men to behemoths in the minds of spectators. An expert draftsman, he meticulously paints these nicknames and then with gloved-hands defaces his pristine paintings, rubbing the surface of the works to mimic scrolling names in film credits, giving the text a sense of motion and temporality.In his painting of the famed old marquee for Madison Square Garden, the site of many legendary matches that was demolished in 1968, Simmons alludes to a bygone New York as he reflects on the mediated lens through which history is viewed. Gwen Allen writes in her essay for Simmons’ monograph “Paradise,” “While nostalgia attempts to shore up the loss of the past by substituting a romanticized and easily-consumable version of it, Simmons approaches nostalgia critically in order to prompt reflection on the conditions and processes of history and history-making.” Over the course of 20 years Simmons has often used boxing as a leitmotif in his work to address the politics of race, class and professional sports. In these latest works he considers boxers such as Joe Louis, Emile Griffith and Sonny Liston, their rises to success as champion fighters and subsequent descents. Simmons is drawn to boxing as it was one of the first sports in which black and working class athletes, however problematically, could garner public admiration and celebrity. Simmons cites Jack Johnson as one exemplar. Johnson was a virtually unbeatable boxer who was among the first athletes to regularly be in the press, on radio, in films and endorse products. In 1910 he defeated “the great white hope” James Jefferies in what was dubbed the Fight of the Century, igniting riots and instigating resentment among some whites and bringing hope to blacks. Following the now familiar but tragic trajectory of many iconic celebrities’ lives, Johnson died young in a car accident. Simmons’ exhibition “Fight Night” is a tribute to these figures. Gary Simmons is included in Prospect New Orleans, which is open through January 25. From November 14 – October 4, 2015 a newly commissioned wall drawing is on view at Perez Art Museum, Miami. Simmons is also included in the 2015 Sharjah Biennial. He has had one-person exhibitions at the Museum of Contemporary Art Chicago; Studio Museum in Harlem; Museum of Modern Art of Fort Worth; Bohen Foundation, New York; Saint Louis Art Museum; Kunsthaus Zürich; Lannan Foundation, Los Angeles; and the Hirshhorn Museum, Washington DC. His work has been included in shows at the Museum of Modern Art, New York; Whitney Museum, New York; Menil Collection, Houston; San Francisco Museum of Modern Art; Walker Art Center, Minneapolis and the Stedelijk Museum, Amsterdam. Simmons thanks printmaker David Adamson, whom he worked with to make his boxing posters.Watch a time lapse video of the installation process of Fight Night at Metro Pictures.