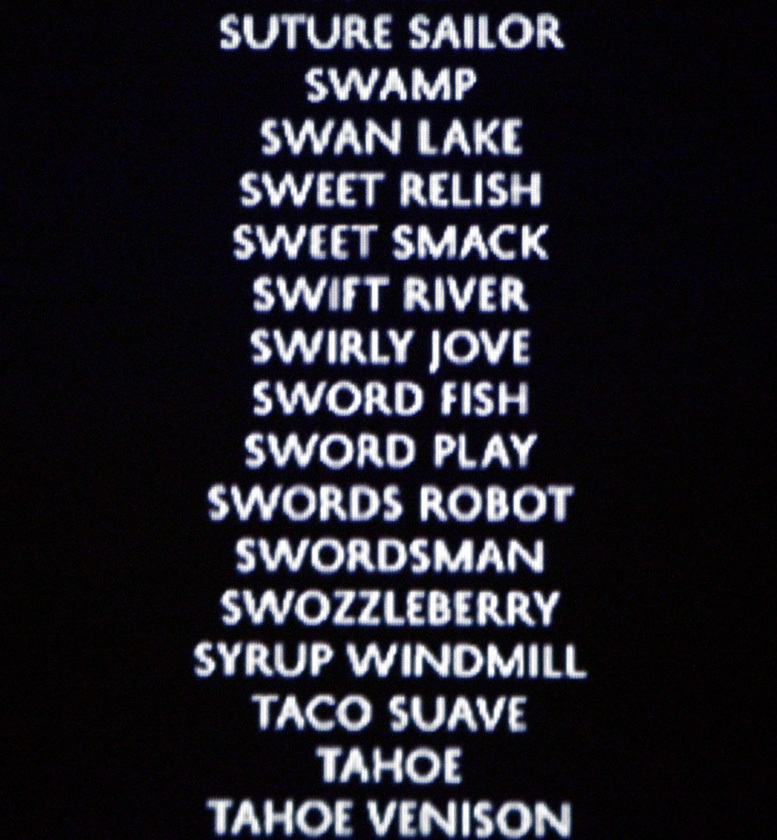 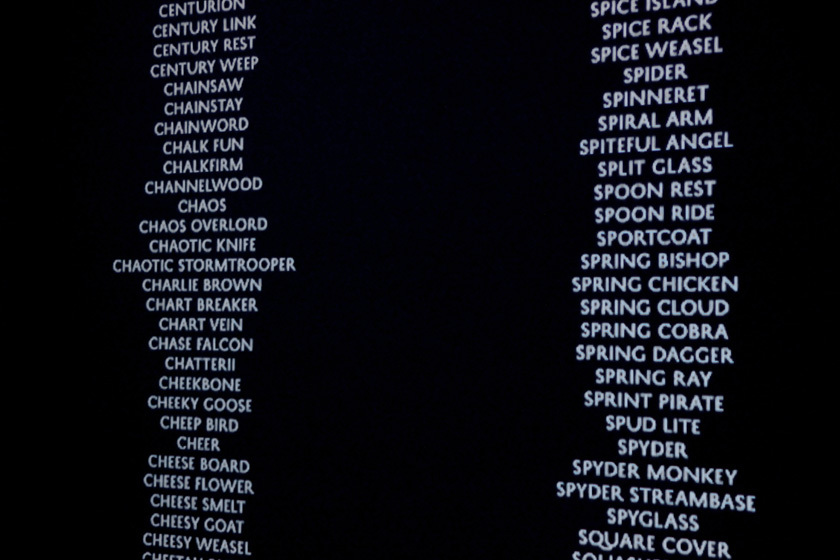 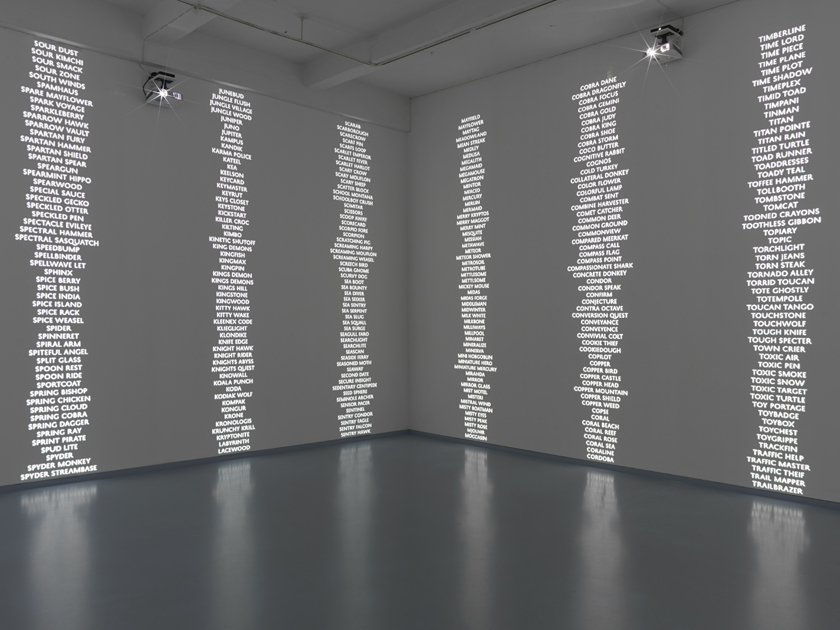 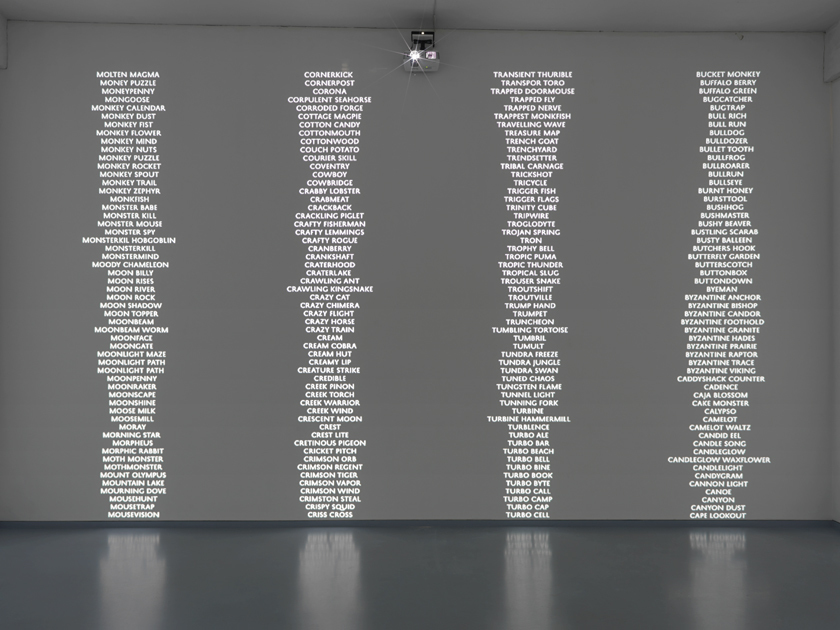 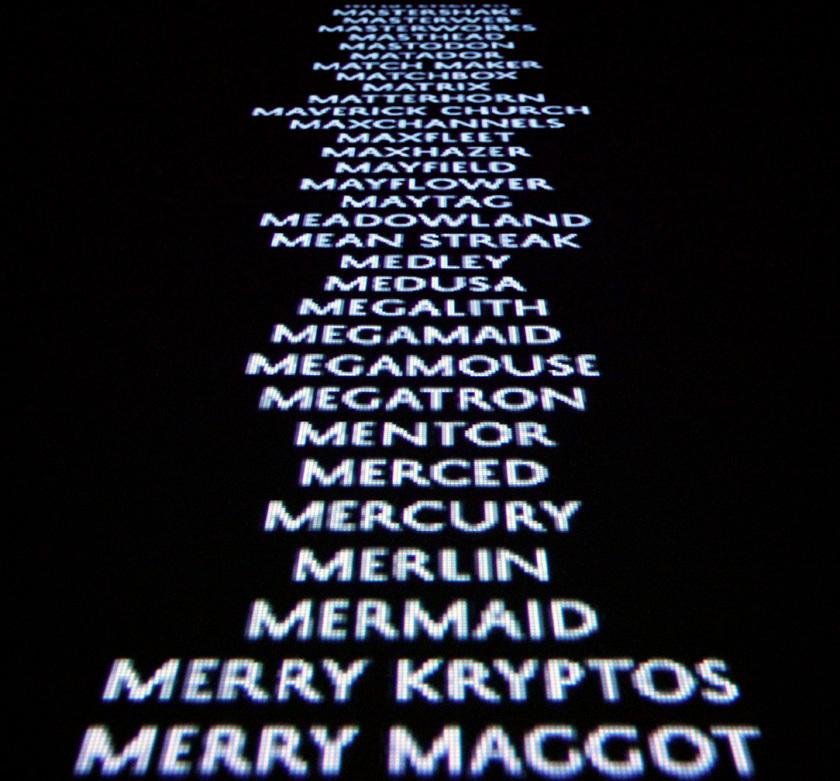 Trevor Paglen presents “Code Names of the Surveillance State,” a video installation in Metro Pictures’ upstairs gallery composed from more than 4,000 National Security Agency (NSA) and Government Communications Headquarters (GCHQ) surveillance program code names. Projected onto four walls as an endlessly scrolling series of columns, the code names are deliberately nonsensical, often droll and sardonic words or short phrases without discernable connection to the programs they designate. “Bacon Ridge” is an NSA installation in Texas, “Fox Acid” an NSA-controlled Internet server designed to inject malware into unsuspecting web browsers, and “Mystic” a program to collect every phone call from the Bahamas. Paglen’s works are not explanatory documents of his subjects; instead, they are revealing and eerie evidence of the US government’s vast secret surveillance apparatus. His installation is as enigmatic and seductive as is his photographs of drones, black op programs, spy satellites and military “black sites.” Within the installation the code names are subtly suggestive of the clandestine programs they represent, just as Paglen's photographs, shot from great distance using specially devised photographic equipment, reveal isolated facilities and distant objects in the sky as untethered and dreamlike aberrations. Commissioned by Praxis Films and the BRITDOC Foundation, with support by Bertha Foundation and Wallace Global Fund, “Code Names of the Surveillance State” coincides with the international release of director Laura Poitras’ film CITIZENFOUR. Paglen contributed cinematography of surveillance bases to the groundbreaking film about Edward Snowden and NSA surveillance. A version of Paglen’s installation at Metro Pictures will be projected onto buildings throughout the UK from October 31 - November 7. A preview of a new film by Paglen followed by a Q&A with the artist and Poitras is scheduled for October 31 at the ICA London. Additionally, Paglen’s Art on the Underground commission “An English Landscape (American Surveillance Base near Harrogate, Yorkshire)” can currently be seen at Gloucester Road station in London.Paglen’s two-person exhibition with Harun Farocki titled “Visibility Machines” is on view at the Akademie der Künste, Berlin through December 14. The show originated at the Center for Art, Design & Visual Culture in Baltimore and was subsequently shown at the Van Abbemuseum, Eindhoven. Paglen's 2012 exhibition “The Last Pictures” at Metro Pictures was related to his Creative Time commission of the same name, an ambitious project that sent a disc micro-etched with 100 photographs into earth's orbit for billions of years. The photographs were reproduced in a book published by the University of California Press and Creative Time Books.Paglen holds an MFA from the School of the Art Institute of Chicago and a Ph.D. in Theoretical Geography from UC Berkeley. He has had one-person exhibitions at the Secession, Vienna; Berkeley Art Museum; Kunsthall Oslo; and Kunsthalle Giessen, Germany. His work has been included in group shows at BALTIC Centre for Contemporary Art, UK; Museo Reina Sofia, Madrid; MIT List Visual Arts Center, Cambridge, MA; SITE Santa Fe, New Mexico; Haus der Kunst, Munich; Walker Art Center, Minneapolis; Tate Modern, London and San Francisco Museum of Modern Art. He participated in the 2009 Istanbul Biennial and 2012 Liverpool Biennial and 2013 International Center of Photography, New York.